After weeks of precaution and diligence, one game is not worth setting the rest of the NFL season on fire.

Now, it’s possible the protocols the NFL has put such faith in will hold, and the game can be played without further spread of the disease. There have, after all, been other isolated cases that didn’t lead to outbreaks.

But if this week has taught this country anything, it’s that testing is neither foolproof nor a cure-all. And it can be days – several of them – before it’s clear whether COVID-19 has spread. 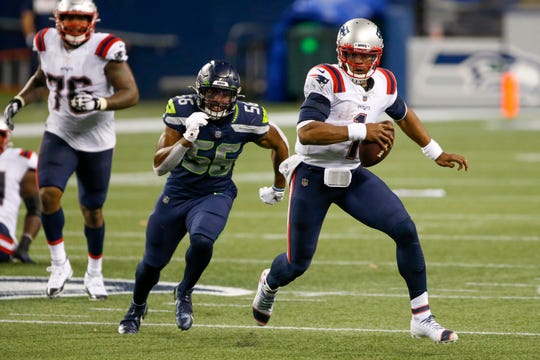 “At present, we’ve had no other positive tests from anyone in the entire organization. And that’s now over three days’ time,” Dr. Allen Sills, the NFL’s chief medical officer, told USA TODAY Sports. “We’ll continue to screen and test those individuals (in close contact).

“We’re trying to be as cautious as we can. No one wants an outbreak. No one.”

The NFL has always known there were going to be cases during the season. COVID-19 is a highly contagious disease, and the NFL is not playing in a bubble.

Even if players and coaches are tested daily, there is still a gap between when tests are administered and when results come back, meaning someone could be spreading the virus without realizing it. Even if NFL personnel are encouraged to wear masks and practice social distancing, they cannot be assured that everyone they come in contact with outside team facilities is doing the same.

The trick is to mitigate those risks, making sure one case doesn’t turn into an outbreak, as it has with the Tennessee Titans. With two more positive tests Sunday, the Titans have had 20 cases since Sept. 24, 10 among players. The team has returned positive tests for six consecutive days, despite Tennessee’s facility being closed since Tuesday.

The NFL is confident that, by testing players Sunday and Monday using both point-of-care (rapid) and regular PCR testing, they can ensure no one is infectious when the Patriots and Chiefs take the field Monday night. But Sills said they've been doing that since Friday. So why not go ahead and play the game Sunday?

“There are only two right answers to me: One would be to say, `This is an isolated case. We’re going to treat it like every other isolated case but we’re going to have them play.’ I don’t think that would have been crazy,” said Zach Binney, an epidemiologist at Oxford College of Emory University.

“The other thing would have been to say, `We’re worried about Cam’s close contacts. We’re going to wait to see if it’s spread to anyone else.’ The problem is, that takes five to seven days. So they’re falling somewhere in the middle.

“And that falling somewhere in the middle choice doesn’t make sense to me.”

Especially when the NFL has options.

Rescheduling the Pittsburgh Steelers game at Tennessee this weekend was relatively easy – or as easy as anything in 2020 can be. Pittsburgh’s game against the Baltimore Ravens was moved, allowing the Steelers and Titans to play in Week 7 and treat this as their bye week.

Fair? Not completely, particularly to the Steelers. But the NFL has recognized that fairness is going to have to take a backseat to flexibility if this season is to be pulled off.

Of course the NFL is going to be reluctant to mess further with the schedule, knowing future outbreaks are possible. But that’s where Week 18 comes in.

There currently is a week off between the conference championships and the Super Bowl, but that hasn’t always been the case. There is no reason the NFL couldn’t – and shouldn’t – say right now that it’s eliminating that bye and creating a Week 18 that will be reserved for whatever regular-season games need to be made up.

Yes, there is always the chance a team will need to make up more than one game. But if that’s the case, the NFL has far bigger problems than figuring out a solution to that.

The NFL has done an admirable job so far of staging a season in the midst of a pandemic. But that’s only been because it has refused to take unnecessary risks. It would be foolish to deviate from that now.