Precious Achiuwa has never been in the same place for long. He tends to be on the move — from Nigeria to New York to Memphis.

Stationed in Long Island City, Queens, for the past seven months as he prepares for the N.B.A. draft on Nov. 18, Achiuwa has been coping with a rare period of extended monotony. A projected first-round pick who spent last season at the University of Memphis, Achiuwa, 21, works out with his trainer. He does “a whole bunch of Zoom calls” with front-office personnel. He takes unscripted naps. He visits with his older brother God’sgift Achiuwa, 30, who lives not far from him in Queens.

But it has been a fairly solitary and stationary existence, a change of pace for a 6-foot-9 forward with drive.

“Seven months of doing the same thing,” he said, “over and over.”

He misses competition, he said. Games of five-on-five have been off-limits during the coronavirus pandemic. He has tried to fill the void in creative ways. His first love growing up in Nigeria was soccer, and he has a ball at his apartment that he juggles with his feet every day.

But the wait is nearly over. Training camps are tentatively set to open Dec. 1, just 13 days after the draft. For prospective first-year players like Achiuwa, it will be a quick transition. No summer league. No long runway to acclimate to the league. And no time to waste. Achiuwa is eager to learn where he will wind up next.

His life, in many ways, has been a nomadic one. One of six siblings, he grew up in Port Harcourt, Nigeria, where his parents, Donatus and Eunice, were Pentecostal ministers. In Port Harcourt, over 350 miles southeast of Lagos by car, soccer was the game of choice. Basketball was not that alluring to Achiuwa — not when he was very young, anyway.

“We had a basketball around the house, and I’d pick it up and dribble it once or twice,” he said. “Then I’d put it back down and go back to kicking the soccer ball.”

But around the same time he was finding himself towering over his friends on the soccer field — “It was just so awkward,” he said — God’sgift Achiuwa was carving out a path that his younger brother would one day follow. 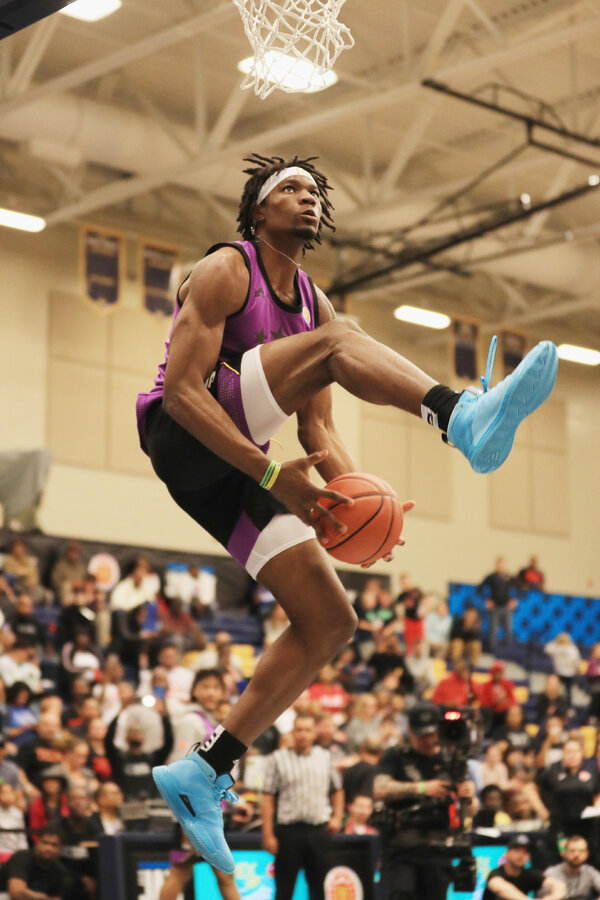 As a teenager, God’sgift attended a basketball camp in Nigeria where he was scouted by Alex Nwora, the longtime coach at Erie Community College in Buffalo. Nwora eventually offered a scholarship, and God’sgift — a 6-foot-8 forward — jumped at the chance.

“I think any time a kid from Africa has the opportunity to come to the U.S. to play basketball and get an education, it’s a no-brainer,” God’sgift Achiuwa said.

God’sgift later transferred to St. John’s, where he played for two seasons before graduating in 2014. By then, Precious was 14 and showing promise of his own as a basketball player. So much promise, in fact, that God’sgift wanted his brother to live with him in Queens so that he could attend high school in the city. God’sgift approached several coaches to gauge their interest.

“Some of them were actually demanding video of him playing,” God’sgift said. “And I told them: ‘Listen, he’s going to at least be as tall and as big as I am. It runs in the family.’”

He secured a scholarship for Precious to attend Our Saviour Lutheran School in the Bronx, starting as an eighth grader. Their parents were on board with the plan.

“Knowing that I would be getting an education made it a lot easier for them to let go of me at a really, really young age,” Precious said.

On one of his first days in the United States, God’sgift introduced his brother to a staple of New York City life: the subway.

“There was nobody on the street,” Precious said. “And then all of a sudden there were just so many people coming out from the underground. And I’m looking at my brother, like, ‘Yo, what’s going on?’”

Before long, Precious was commuting to school in the Bronx — a four-hour round trip that required the use of both the subway and public buses. He quickly established himself as one of the top freshman players in the country. His brother had been entrusted by their parents to keep an eye on him. But Precious seemed uniquely focused.

“I didn’t have to go to any meetings or sit in front of any principals,” God’sgift said. “He’s a really good kid.”

As Precious’s talents became more obvious, he sought better competition by transferring to St. Benedict’s Prep in Newark, N.J., where he lived with a teammate’s family, and later to Montverde Academy, near Orlando, Fla., where he was a McDonald’s all-American as a senior.

Even then, he was still relatively new to the game — new enough that he was unfamiliar with Penny Hardaway, the coach at Memphis who was recruiting him. (A friend suggested that Achiuwa watch some of Hardaway’s old highlights online.)

Cody Toppert, one of Hardaway’s assistants, said Achiuwa was not a guaranteed “one-and-done” player when he arrived at Memphis before the start of last season. But the coaching staff could sense that he had come with purpose: to maximize his time. For example, he stayed late after most practices to refine his 3-point shot, which he knew would be a prerequisite for a player his size in the N.B.A.

“He basically had this willingness to do whatever it was going to take to make sure he wasn’t coming back for a second year,” Toppert said.

The spotlight found Achiuwa early in the season after James Wiseman, the team’s center and one of the top prospects in the draft, ran into eligibility problems and left school after playing in three games. In Wiseman’s absence, Hardaway went with a smaller lineup. Achiuwa ran the court, defended multiple positions and proved to be an energetic leader.

“It kind of happened by accident because James left,” Toppert said. “But there’s no doubt that it created an opportunity for Precious to show an extreme level of versatility.”

After averaging 15.8 points and 10.8 rebounds while shooting 49.3 percent from the field, Achiuwa was named the American Athletic Conference’s player of the year as a freshman. When the season was cut short by the pandemic, he declared for the draft and returned to Queens to prepare for the next phase of his life.

His basketball dreams have involved sacrifice. His father recently died, and he has not seen his mother in about three years. But he talks with her on the phone nearly every day, he said, and there is a chance that she will be able to travel to New York this month to watch the draft with him.

It would mark the end of one journey — and the beginning of another.