Michael van Gerwen appears to be a man on a mission at the Grand Slam of Darts, having relinquished just six legs in reaching the quarter-finals, yet the prospect of facing the world No 1 holds no fears for Simon Whitlock.

‘The Wizard’ has accounted for the Dutchman at this year’s World Matchplay and World Grand Prix, and he is confident of conjuring up more magic to complete a remarkable hat-trick of major wins over the three-time world champion.

Prior to his comprehensive 11-4 victory over Van Gerwen at the Matchplay, the amiable Aussie had lost his last 15 meetings against MVG – a record dating back to October 2016.

So what’s the secret to his recent success against the world’s premier player?

“I’ve been practising well, I’ve been playing a lot of online darts this year so my game is at a really good stage. I am actually happy with my set-up, with my darts, which all goes towards confidence.

“I’ve beaten Michael [van Gerwen] the last two times on TV in big majors so I’ve definitely got the game. It’s just performing on the day. If I feel good and everything clicks, then I can beat anybody. 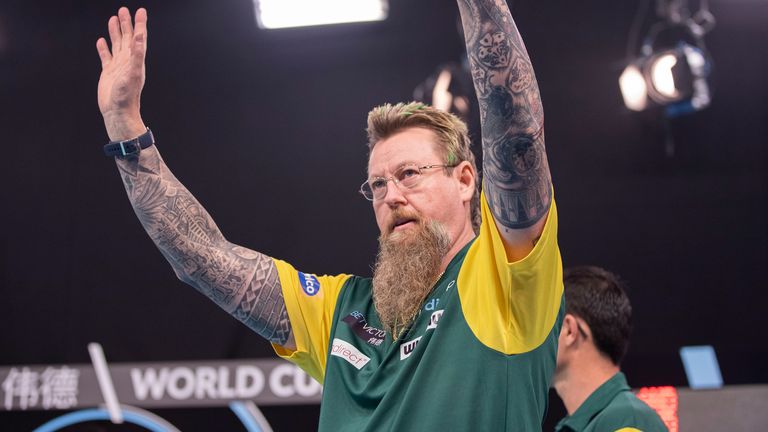 “I haven’t finished playing the game. I am still as keen as ever – I still play pretty much three, four times a week.”

Whitlock on his passion for the sport…

The Australian was in inspired form, becoming the first player outside of Van Gerwen and Phil Taylor to post a ton-plus average in the double-start event, over a best of five sets format.

The two-time world finalist is embarking on his fourth Grand Slam quarter-final on Sunday evening, but he has never progressed beyond the last eight in 10 appearances.

His three previous quarter-final defeats came against the trio of Phil Taylor, Scott Waites and Gerwyn Price – all three of whom went on to lift the title.

Whitlock is hoping that history doesn’t repeat itself, but he is relishing his latest dust-up with the 31-year-old – confessing that he prefers the cut and thrust of knockout darts, as opposed to the unpredictable round-robin format.

“I don’t really like the format. I don’t like the round-robin stuff – that doesn’t really work for me,” admitted the former European Champion.

“It is not really in your hands sometimes but if you get through that then it is good, because you get to the longer game, the knockout, and I do enjoy that part of it.”

The elongated format does present difficulties though. Matches over the best of 31 legs are a test of resilience ordinarily, but this task is compounded by the players’ current intensive schedules.

Despite topping Group B with maximum points, the former World Cup finalist was laboured in his 10-6 win over Adam Hunt on Friday, averaging a paltry 87 in a scrappy affair.

Since the World Cup of Darts got underway in Salzburg on November 6, Whitlock has only had three days without playing competitive darts, and he concedes it is gradually taking its toll.

“This is tough. Coming back from Austria we only had one hour’s sleep and then I had to qualify that day as well which was really tough, but I’m really happy about that because I qualified and I’m in the last eight,” he added. “I struggled the last two matches but I think that’s just because I’ve played too much. I just need a good rest. My body is getting older.

“I’m probably the oldest player still in the tournament. It is hard work. Hopefully, I’m going to come out firing and I will feel real good.”

It is a testament to Whitlock’s insatiable passion for the sport that he is thriving under such testing circumstances.

Australia’s most successful darting import is the elder statesman within the world’s top 20, but he is proving that age is just a number with a stirring resurgence over recent months.

The 51-year-old has reached three major ranking quarter-finals this term – a record matched only by World Matchplay champion Dimitri Van den Bergh and Van Gerwen himself.

He is not the only Australian making waves though. His World Cup partner Damon Heta is through to the quarter-finals on his Grand Slam debut, with two Australians set to star in the last eight of a major tournament for the first time since October 2017.

The pair flourished in tandem at the World Cup before succumbing to eventual champions Wales, and Whitlock lauded praise on his fellow countryman, who takes on James Wade for a place in Monday’s semi-finals.

“It’s great. I didn’t hardly know Damon [Heta] before he came over here but we have got to become pretty good friends as far as I’m concerned.

“He is a fantastic player. It’s just good to have another Aussie over here doing well.”

Whitlock’s focus is firmly on his own fortunes, however. He is bidding to lift just his second major PDC title and given his consistency over the last decade, he could be forgiven for feeling his exploits have merited greater reward. This may have deflated many professionals entering the twilight of their career, but it has simply strengthened the desire of Whitlock, who insists he has got unfinished business as he bids to sign off the season in style.

“I think it is [passion] just inside of you. I haven’t finished playing the game. I am still as keen as ever – I still play pretty much three, four times a week.

“You are never finished I think – not unless you are a world champion, then you can think I’ve got to the peak of the game and now I can rest up a little bit.”

Don’t miss a dart from the Grand Slam of Darts on Sky Sports as the action continues on Sunday with all four quarter-finals – join us from 1pm and 7pm on Sky Sports Arena and follow us @SkySportsDarts for updates and clips throughout the tournament.