Caroline Marks, the World Surf League's youngest competitor, has claimed a maiden title at the season's opening event on the Gold Coast and announced herself as a genuine world championship contender. 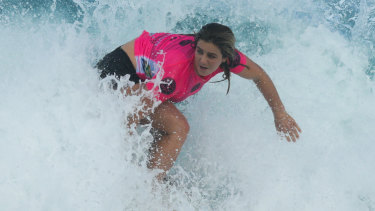 It capped a breakout tournament for the teenager, who had stopped world No.1 and local favourite Stephanie Gilmore in a clinical quarter-final performance on Saturday.

Seventh in the championship last year on the way to rookie of the year honours, the level-headed Marks is eyeing the top prize.

Historically speaking, she is well on the way given almost half of the season's first-up winners on the Gold Coast have gone on to claim the world crown.

Three-time world champion Moore (11.90) had eliminated long-time rival and Australian hope Sally Fitzgibbons (9.87) in Monday's semi-finals, nailing a 7.17 with her first wave and controlling the heat.

In the men's event, Brazil's Italo Ferreira delivered a 7.07-point wave in the dying moments of the final to snatch victory from Kolohe Andino.

Needing 6.93 to take the lead, the aerial specialist executed a clean 360-degree spin that impressed the judges and denied the American a maiden championship tour title in his eighth year on tour.

Luckless Andino had controlled the final expertly until that moment, although Ferreira entered the decider in fine form after prevailing in a back-and-forth semi-final against Jordy Smith earlier in the day.

‘‘But he did a full rotation and good on him.’’

Andino was a narrow loser to Australian Matt Wilkinson in the 2016 decider on the Gold Coast when his own last-gasp effort fell short.

Clearly gutted, the 25-year-old said he would do his best to turn the disappointment into motivation.

‘‘It’s a super bummer I wasn’t getting chaired out, but it’s a long year, great result and hopefully I can win one soon.

‘‘I was two minutes away from winning that one; it’s all the Lord’s plan I guess.’’

Smith had earlier upset Brazil's reigning world champion Gabriel Medina in the quarter-finals but was then toppled by Ferreira in the heat of the event, as both men found conditions just right for a series of massive aerial manoeuvres.

Competition returned to the alternate Duranbah Beach venue after organisers attempted, without success, to shift action to the traditional Snapper Rocks venue on Sunday.