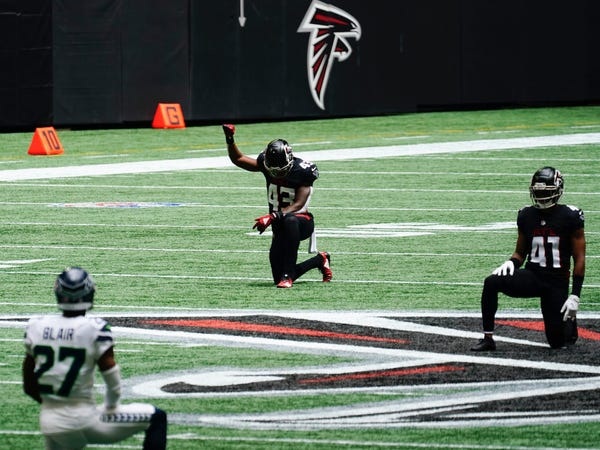 Teams across the NFL have taken a range of approaches in their protests of social injustice on the first Sunday of the 2020 NFL season. Some remained in the locker room during the national anthem, while others stood arm-in-arm in the end zone.

But the Atlanta Falcons' and Seattle Seahawks' gesture stood out among the pack.

During the opening of their first game of the year, players from both teams joined forces to make a statement after Seattle's Jason Myers kicked off. The Falcons neglected to return the kick, and instead all 22 players on the gridiron took a knee.

The Seahawks kept their protest plans under wraps prior to Sunday's game. Though some of Seattle's players sat and kneeled while the national anthem played at Mercedes-Benz stadium, most of the Seahawks side — including quarterback Russell Wilson — stood.

All of Atlanta's team stood as well. However, the Falcons honored late civil rights activist and Georgia Congressman John Lewis by making him an honorary captain for the team prior to kickoff. Players on both sides wore white sweatbands featuring Lewis' initials to honor him two months after his death.

Seattle went on to win the game 38-25, though Atlanta closed the gap with a 13-point fourth-quarter comeback bid.