Somehow, things have only gotten worse for the Los Angeles Lakers sinceMagic Johnson abruptly resigned as team president in an impromptu press conference.

As of Friday, they still don’t have a head coach and reports indicate they have bungled the process. At the rate things are going, the Lakers appear to be nearing a tipping point in which major change might be needed.

ESPN’s Adrian Wojnarowski reported on Wednesday that the Lakers top candidate, Tyronn Lue, backed out of the process after the two sides came to an impasse in negotiations. 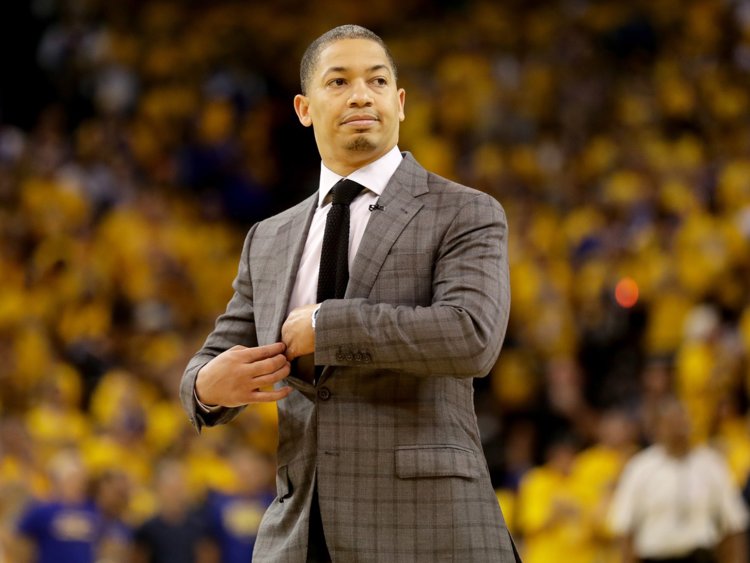 Tyronn Lue was the Lakers’ top head coaching candidate.Ezra Shaw/GettyAccording to Wojnarowski, salary, contract length, and overall team structure played a part. Wojnarowski reported that the Lakers offered Lue a three-year, $18 million deal to become the head coach, surprising Lue’s camp, as they expected a five-year offer. It would have coincided with LeBron James’ Lakers contract expiring, and reports indicated that Lue was offended at being seen as merely a coach for James.

The Los Angeles Times’ Bill Plaschke reported that the Lakers offer not only came up short in years, but it was also low on money. According to Plaschke, both Walton and Monty Williams (another candidate the Lakers interviewed but passed on) signed five-year, $25 million deals with the Sacramento Kings and Phoenix Suns, respectively, this offseason — figures closer to today’s standard in the NBA.

The structure of the team appeared to turn off Lue as well. Wojnarowski reported that the Lakers wanted input on Lue’s assistant coaching staff. Among the candidates was Jason Kidd, who the Lakers interviewed for the head-coaching job and impressed the team. Such a set-up would have undermined Lue’s authority in the locker room from the jump.

The entire Lue debacle shows how poorly the Lakers handled the situation.The New York Times’ Marc Stein reported that the Lakers preferred Lue over Williams, but some in the organization were sensitive to the optics of hiring Lue, believing it would be viewed as appeasing James, who played under Lue with the Cleveland Cavaliers.

According to Stein, the Lakers essentially waited out Williams, who was hired by the Suns, then began to move in on Lue. Lue’s hiring seemed so inevitable that Lue was seen celebrating his birthday with aLakers-themed cake.

According to Wojnarowski, the Lakers are now “scrambling” for a coach. There are other intriguing candidates on the market, but the organization hasn’t done itself any favors in appealing to future candidates.

The Lakers still have a void at team president, and the optics of the coaching search haven’t been favorable to GM Rob Pelinka. 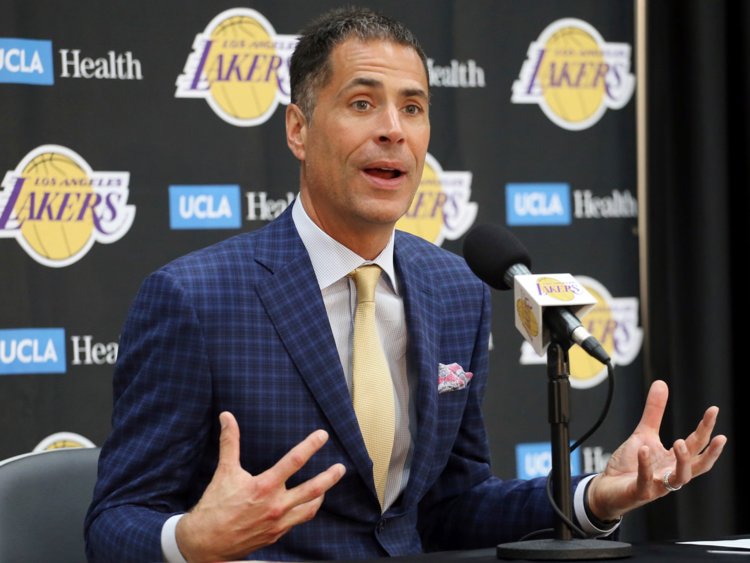 Rob Pelinka has been criticized during his time as Lakers GM.Reed Saxon/AP ESPN’s Ramona Shelburne reported that Pelinka didn’t think Lue would back out of negotiations because he didn’t have any other offers. The whole thing amounts to the Lakers misplaying their hand.

The Athletic’s Bill Oram wrote that the Lakers should hire a respected president to hire a GM of his or her choice then, ousting Pelinka from the job.

Team advisor Kurt Rambis and his wife, Linda Rambis, have also been major players in the offseason.

ESPN’s Amin Elhassan said Linda Rambis is seen around the league as a “shadow owner” because she is close with Buss. Shelburne said Linda’s role is only expanding. 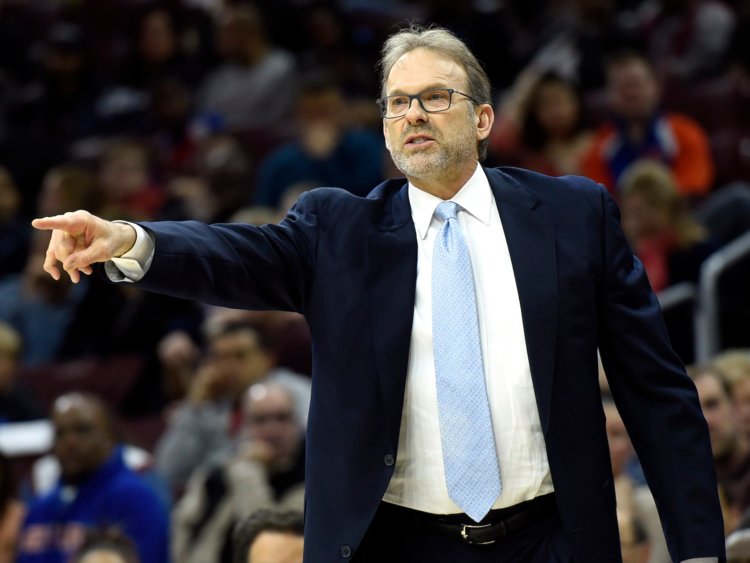 Kurt Rambis is reportedly a powerful voice within the Lakers.Michael Perez/APWojnarowski reported that Kurt Rambis has been a significant voice in the coaching search.According to Vincent Goodwill of Yahoo, the Lakers wanted Rambis to be an assistant under Lue, which Lue rejected.

The various and seemingly conflicting voices within the Lakers only underscore what ESPN’s Zach Lowe said on “Get Up!” the day after Johnson abruptly resigned.

“The atmosphere there is totally poisonous. It’s toxic,” Lowe said. “Nobody trusts anybody; communication is totally siloed … [The next president] needs to be someone who comes in and reshapes the culture of how they communicate and how they make decisions because it is totally broken.” 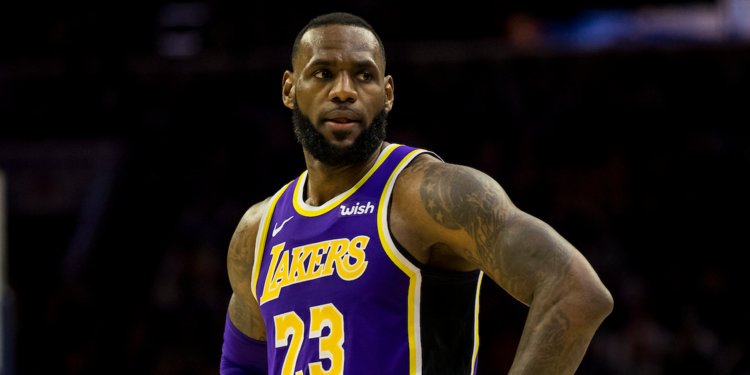 This summer is a crucial one for James and the Lakers. There is pressure to return to the postseason after their failed playoff bid last year.

The Lakers reserved cap space for the star-studded 2019 free agency class, filling out their roster with players on one-year deals who, frankly, played a part in their failed playoff chase.

Read more: T he 2019 NBA free agent class is stacked and has the potential to alter the league — here are the best players available

But perhaps the Lakers would be better off abandoning the goal of making it back into the postseason so quickly.

ESPN’s Stephen A. Smith reported on Wednesday that there are members of the Lakers organization telling Buss to trade James.

It seems ludicrous on the surface. They landed James, 2018’s biggest free agent and NBA’s best player, just one year ago. He’s the starting block for getting back to the playoffs and regaining credibility.

There could be some logic to it, however. Their pursuit of Lue was clearly because he won a championship with James. The continued search for a veteran head coach and the pressure to land a second star is to help James. 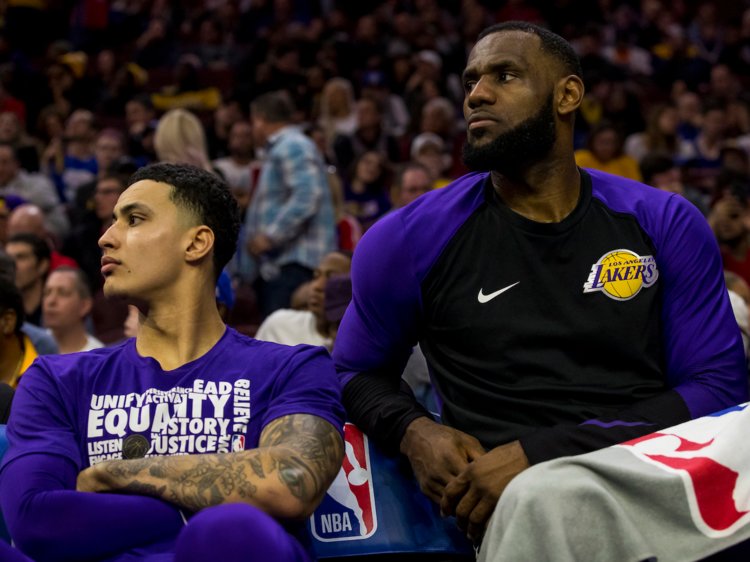 LeBron James’ presence has unnaturally sped up the Lakers’ timeline.Chris Szagola/APBut the Lakers were not in a position to immediately leap into championship contention when they landed James in 2018. They had an inexperienced front office in Johnson and Pelinka and young players like Lonzo Ball, Brandon Ingram, and Kyle Kuzma who, while talented, were not ready to make the jump into second- and third-best players on a contending team.

With the growing perception that today’s star players are less interested in playing with James, perhaps the Lakers would be better off trading James, hitting the reset button, and trying to build from the ground up.

Read more: Kevin Durant says fewer star players want to play with LeBron James because of his style and the ‘toxic’ environment that follows him

It’s unclear what a trade for James would even look like because there’s no player like him in the NBA. He is still an elite talent, but he’s on the back-end of his career. He doesn’t own a no-trade clause as he did in Cleveland, but teams would be wary of trading for him if there were a belief he didn’t want to be there. James’ presence can completely reshape a franchise.

It would be difficult to make a trade, but the Lakers’ current dilemma was sparked, in part, from trying to go from a young lottery team to a contender in just months after James signed with them. The resulting pressure of trying to speed up that timeline has created some of their ongoing problems.

Fans want change, and it could be coming

The Lakers problems are bad enough that fans are staging a protest outside of the Staples Center on Friday.

A change could be coming soon, one way or another.

The Lakers are still interviewing coaches, and candidates like Kidd or former Indiana Pacers coach Frank Vogel could be suitable replacements.

No one is sure how the Lakers’ free agency will go. They’re not said to be front-runners for the top players, but the team’s outlook could change drastically if players like Kyrie Irving, Kawhi Leonard, Jimmy Butler, or Kemba Walker decide they do want to play with James in L.A.

If things continue to go sideways, however, it’s unclear how long Pelinka could hold onto his job. With the president position still vacant, the Lakers could decide to hire a respected executive who could re-organize the whole team. That could even include trading James. Striking out in free agency could only speed up wholesale change.

No matter how things look now, what happens in June and July could drastically reshape the perception of the team, for better or worse.