When Mets pitcher Noah Syndergaard strode into the home clubhouse at Citi Field around 11 a.m. on Sunday, he pulled a blue rolling suitcase behind him.

The team was ready to depart on an 11-day road trip after a series finale with the Cardinals, but Syndergaard, who strained his right hamstring while pitching the night before, already knew his more immediate destination: the 10-day injured list.

“It is a hit,” Mets Manager Mickey Callaway said. “We have to have somebody step up in his place.”

Syndergaard, who is 5-4 with a 4.55 earned run average, underwent a magnetic resonance imaging examination before the game, but the team did not disclose a diagnosis.

The day’s defeat only added to the grim news. After the team fell, 4-3, to St. Louis despite outhitting the Cardinals, 10-3, Callaway recognized the mounting disappointment for his middling squad.

It was his team’s third loss in the four-game series, and it came with the additional news that Jason Vargas, the starter, also left the game with an injury after taking a swing as a batter in the bottom of the fourth inning.

For Vargas, who gave up one hit — a two-run home run to Cardinals first baseman Paul Goldschmidt in the top of the first — it was just a cramp in his hamstring. He received fluids in the clubhouse and recovered fully after a treatment session.

“I have never experienced something like that, especially not on a swing,” Vargas said. “It was kind of an unusual feeling, not being able to shake it.”

The inability to string together a few wins is an increasingly common experience for the Mets, though. With the team now 34-37 and heading into a series against the Braves, who are in first place in the National League East and lead the Mets by seven and a half games, third baseman Todd Frazier acknowledged the need to play with greater urgency.

“We have to make up some ground,” Frazier said. “I’m a scoreboard watcher, man. I watch it all the time. We know we’re better than this. We have to figure it out.” 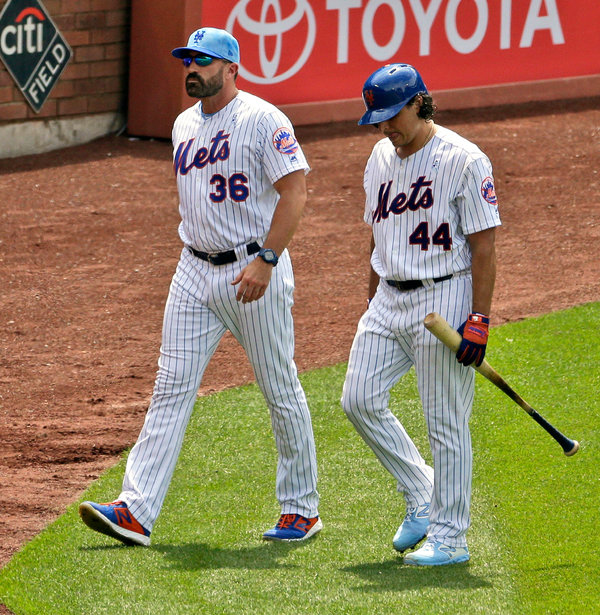 The Mets did not announce a replacement for Syndergaard, who spent time on the injured list twice last season. One possibility would be Chris Flexen, who took the loss in relief against the Cardinals on Sunday. He entered the game in eighth inning and fell behind Cardinals shortstop Paul DeJong, who drove a 3-1 slider over the fence in left field for the go-ahead run. Flexen hung the pitch over the plate.

“One pitch away today,” Flexen said.

Vargas had been on a two-game roll. After throwing a shutout against the Giants, he lasted six innings in leveling the Yankees in the Bronx on Tuesday. Aside from the homer, he was healthy before feeling discomfort when pitching against Harrison Bader. It worsened after he took his final swing.

“My hamstring just cramped up really hard, and I couldn’t get rid of it,” he said.

Out went Vargas; in came Jacob deGrom, the National League’s reigning Cy Young Award winner, who hit a home run earlier in the season. He inherited a 1-1 count and drew a walk. He ran the bases, as well, with his next start scheduled for Tuesday in Atlanta. He did not take the mound, however, as Wilmer Font came on in relief and threw three scoreless innings.

The Mets are searching for wins by any means necessary. Callaway offered fans a unique lineup card for Father’s Day. Dominic Smith, who typically occupies a spot in the middle of the batting order, led off the bottom of the first with a double off the wall to left field. He followed with a walk and later added a single.

“First time ever in my life leading off, so it was different,” said Smith, who scored the Mets’ first run. “I wasn’t really a speed guy, but baseball is changing.”

There was a reintroduction, as well. Robinson Cano, playing second base for the first time since recovering from left quad tightness, batted fifth rather than in his typical spot as the Mets’ third hitter. He had to test his quad in the third inning when he pulled a ball to right and proceeded to leg out a stand-up double. He proceeded to go from second to home on a single by Adeiny Hechavarria.

“We have a lot of games in a row,” Callaway said, “and we’ll manage his workload appropriately.”

The Mets will have to manage that while on the road, where the team has struggled all season. They have lost 18 of their last 23 games away from Queens and will have to negotiate their way through an 11-game stretch that starts in Atlanta before moving on to Chicago and Philadelphia.

As the players checked their travel bags, Frazier eyed the clubhouse Sunday afternoon. He noted that the season’s midway point was near, and the team needed to move past the missed opportunities.

“Let’s get it kick-started tomorrow and put everything in the rearview mirror,” Frazier said.