Mark Occhilupo, by his own admission, has lived the latter part of his life as an 'open book', although the surfing great wouldn't mind refreshing his 2009 autobiography to reveal even more about his turbulent career in and out of the ocean.

He's been brutally honest about his struggles with mental health and depression, something the 53-year-old he continues to monitor daily, as well as his issues with drugs and alcohol. As it stands, the former world champion is proudly sober having given up drinking in recent years.

A typically candid Mark Occhilupo admits he probably left multiple world titles on the table during his wilderness years.

He recounts some of it in a new web series with Tim Ross that explores the defining moments of a number of high-profile Australians yet there is a question that Occhilupo has never really found himself having to answer. Perhaps he was afraid to contemplate the response.

How good could he have been if not for the personal battles he fought, or if he had taken a step back from the tour life that would see him spend as much time with the bottle as the board?

"That’s a question I don’t get thrown. It’s a very good question. Far out, I guess I could have done better. I remember a lot of times when I was hungover or washed out trying to perform," Occhilupo said.

"The rolls I got on, especially early in my career when I was in the top five, I’d get some momentum and avoid that sort of stuff (partying). But that’s less than 50 per cent of my career.

"The rest was probably lost largely to partying too much and having too much of a good time. That’s something I never think of. It’s such a prominent question. I was so happy with one world title. It was a struggle to get there. Nobody has really asked me how many world titles I could have won."

Occhilupo was a surfing prodigy. He was ranked third in the world at 17 and won the iconic Pipeline Masters just two years later. He was fast, freakishly talented and aggressive but it wasn't enough. At 22, mired in depression and a victim of his lifestyle, he walked away from the tour. 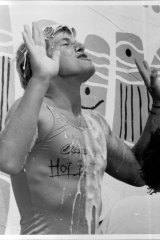 Occhilupo celebrates a win at North Narrabeen in 1986.Credit:Greg White

He would famously come back to win the title in 1999 but who knows how many titles he may have amassed in between if he had been able to seek help for his addictions and mental health and devote himself fully to a craft he was born to pursue.

"Probably a huge amount of difference. I’m lucky… I’m lucky to stll be here, probably. I’ve lost friends, overdosing… I don’t mean I would have done that but with depression, there’s the whole circle that comes into it," Occhilupo said.

"Back then, it just wasn’t talked about. When I got depressed and left that tour, if I had someone to talk to about it, it would have been so much better. Once I made my comeback, I had already sought counselling.

"I didn’t even tell anyone (when I left the tour). It could have been a whole lot different. Was I ready for it back then? That’s probably the question."

The modern approach to surfing has become a far cry from the wilder days of the sport when Occhilupo was at his prime. Most are elite athletes who treat their sport in kind. Now, surfing has made it to the Olympic Games and will be featured in Tokyo next year.

But it has a history of troubled participants at the top level, Occhilupo among them. Hawaiian great Andy Irons was found dead in 2010 with a cocktail of drugs in his system, while former world champion Sunny Garcia continues a slow recovery from an attempt at suicide earlier this year. He had previously spoken about his mental health and depression.

Occhilupo doesn't believe surfing has a particular issue with mental health but is simply reflective of its prevalence in society. He does acknowledge, however, that the enormous rush the sport can provide, often punctuated with periods of relative inactivity, can be difficult to negotiate. 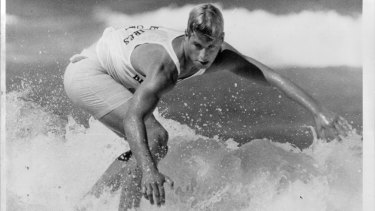 Occhilupo in 1985, the year after he topped the ASP rankings aged just 17.Credit:Fairfax Media

"I don’t think it’s any greater than any other sport. But surfing can give you such incredible highs. You can get extreme highs from surfing. Maybe it’s that… you can have a run of surf for two weeks and it can be amazing. Then it can go flat for a month and then it can be depressing.

"For me, it’s a life-long task managing things. We lose so many people, I’ve had really good friends. Just with my career, all the ups and downs of surfing, it hasn’t been easy. My life has been an open book but I think I’ve got a hold of it now.

"I like to talk about it. I tried giving up drinking three times over the last 10 years and I’ve only just succeeded. I’m still learning about it but everyone deals with it in some way. It’s really important to talk about it and think about it."

Being a mental health advocate and speaking opening about his struggles has been a gift for Occhilupo, who now lives in northern NSW with a healthy brood that remain in love with surfing and the ocean.

It was hard to do my book. I’d probably like to do another one to be even more open.

With the stigma of speaking about mental health and depression changing a great deal since his first book a decade ago, Occhilupo would consider a revised version, one in which he really opens the door to a brilliant surfer but deeply troubled soul.

"It’s funny. Back when I started talking about it, about 10 years ago, it was kind of embarrasing. It was hard to do my book. I’d probably like to do another one to be even more open.

"You just have to tell the truth and if you don’t, you’re running away from yourself."