Andy Ogletree went out to celebrate the night he made it into the finals of the United States Amateur in 2019. He still had 36 holes of match play the next morning to decide who would be the champion. But he and his opponent, John Augenstein, had already accomplished something every golfer fantasizes about: Regardless of who won, they were both guaranteed spots at the Masters Tournament in April 2020.

Ogletree went on to win the U.S. Amateur. Then he began making plans for his senior year of college and ultimately to turn professional after the Masters.

Being invited to play in the Masters is a golfer’s dream. But this year, the novel coronavirus nearly deprived the special invitees their opportunity to play Augusta National Golf Club, a chance that may only come along once for amateur champions and even some pros. 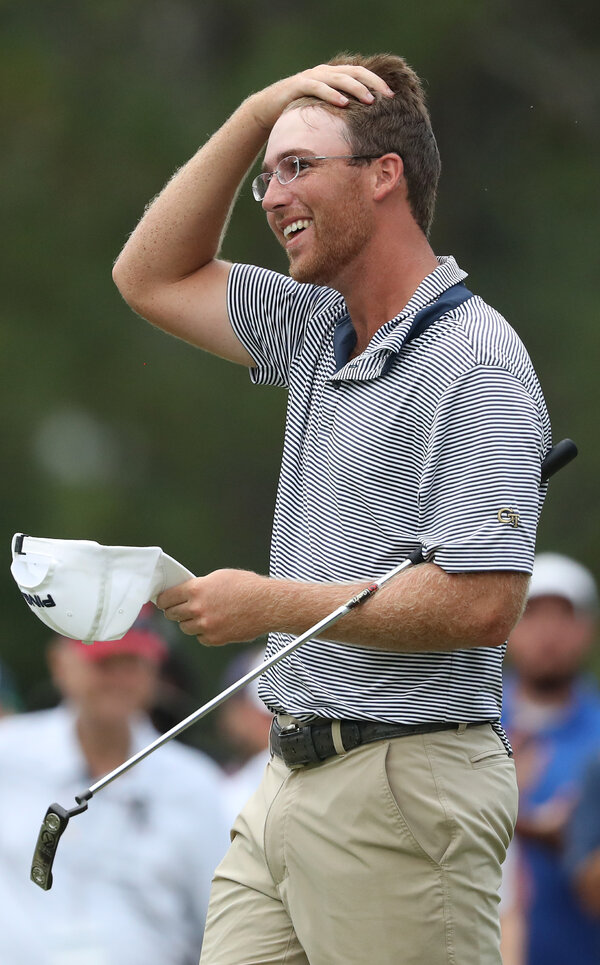 In early March, Fred Ridley, the chairman of Augusta National, said the event would be played as usual. A little over a week later, on March 13, the Masters was postponed, with little clear guidance on when it might be rescheduled.

“We recognize this decision will affect many people, including our loyal patrons,” Ridley said in a statement. “Your patience as we make every effort to communicate effectively and efficiently is appreciated, and we will share any additional information as soon as it becomes available.”

The tournament that occurs every year in April, a tradition unlike any other, as the event’s line goes, was postponed because of the pandemic. No new date was given at the time, and players on the annual exemption lists, like the winners of the U.S. and British Amateur championships but also anyone who won a PGA Tour event the previous year, were left wondering what would happen to their invite if the Masters didn’t happen. Would it carry over to next year, when there would be new champions, or would they be out of luck?

Ogeltree said he was with his Georgia Tech teammates in Florida, where they’d gone after their season was canceled, when he heard the news.

Across the Atlantic Ocean, his counterpart, James Sugrue who won the 2019 British Amateur Championship in his native Ireland, was also crushed by the news. Receiving the original invitation was among the best moments in his golf career.

“We have a furniture shop in town, and all the mail comes in there,” he said. “My uncle brought it home. It was just unreal. I knew straight away what it was. It says Augusta on the envelope.”

He opened it with his mother. The family quickly framed it and made plans to join him in Georgia for the tournament.

The memories of a player’s first Masters are not forgotten, even by seasoned professionals and past champions. Mike Weir, the Canadian golfer who won the Masters in 2003 on his fourth try, said he still relished the day when his annual invitation arrived.

“As a past champion, you’re guaranteed an invitation,” Weir said. “But the kid inside you still gets excited to see that invitation in the mail.”

And that first Masters? He remembers every detail. “The big thrill was just being on site,” Weir said. “Going down Magnolia Lane for the first time, you’re thinking, I’m at the Masters. Only a couple of years earlier, I was struggling on the Canadian tour.”

Professionals take the invite seriously. For many of them, it’s not a given. If they’re not a past champion, or a recent winner of another major, the players have to be within the top 50 in the world rankings to get an invitation. So, for a young player, even one with tremendous potential, capitalizing on an invite from winning a tournament is an important career milestone.

That is what Cameron Champ, a long-hitting young professional, said he had been hoping to do. Winning a PGA Tour event is usually a lock for an invitation to the Masters. He had won the Sanderson Farms Championship in 2018, but at the time it was an alternate event, held the same week as the 2018 WGC HSBC Champions, so it did not get him a Masters invite.

Last September, he won the Safeway Open, which finally got him a Masters invite.

“Seeing the invitation for the first time, all the satisfaction of getting there, it’s the most prestigious event in golf,” Champ said. “You’re a certain caliber in the rankings if you’ve won. I’m only 24. I’ve watched it every single year of my life.”

He said the first thing he did when he won the Safeway was bring the trophy home to his grandfather, who had been instrumental in his playing golf.

“When I walked in, he was wearing a 2019 Masters hat,” Champ said. “When I showed him the trophy, he said that’s what you should be doing, you’re a tour player now. I laughed. If it was that easy, I’d have 50 of them.”

First-time invites to Augusta National tend to bring as many family members as can make it. But this year patrons are not allowed.

Sugrue said that was particularly tough for him. “I know it’s great at the moment that the Masters is going ahead, but I really feel for my parents and siblings and family and friends who can’t come over and enjoy it with me,” he said. “I just got an email the other day to say my mom and dad and girlfriend didn’t pass the criteria to go. It’s just me and my coach. It’s been a disaster for them.”

As part of winning the British Amateur, he played in the United States Open. He expects the Masters experience to be similar. “It’s go to the golf course and go back to the hotel,” he said. “It’s pretty boring at tournaments.”

One thing players didn’t get was a call when Augusta National announced on April 6 that the event was back on. The club, ever formal and proper, opted to mail a second invitation.

“I saw the announcement on social media,” Ogletree said. “It was a sigh of relief for me. I didn’t know there would be a Masters this year. I’m super pumped. I’ve been waiting to turn pro after the Masters.”

With the event being played in November, he has an advantage over other players. He’s played Augusta National many times in the fall — a recruiting perk for Georgia Tech. And he has experienced something other first-timers may struggle with.

“The first couple of times, you’re on the fifth hole and you’re 3 over par because you’ve just been looking around,” he said. “You’re thinking, Phil [Mickelson] hit a shot here or Tiger [Woods] hit a shot here. Every time you play it you feel more comfortable.”

As the U.S. Amateur champion, Ogletree plays with the defending Masters champion, who in this case is Woods. So, for his first two rounds, Ogletree will be walking alongside Woods.

That thought was in the back of his mind in the U.S. Amateur final.

“The extra motivation to win was getting to play to Tiger in the Masters,” Ogletree said. “I’ve never played with him before.”