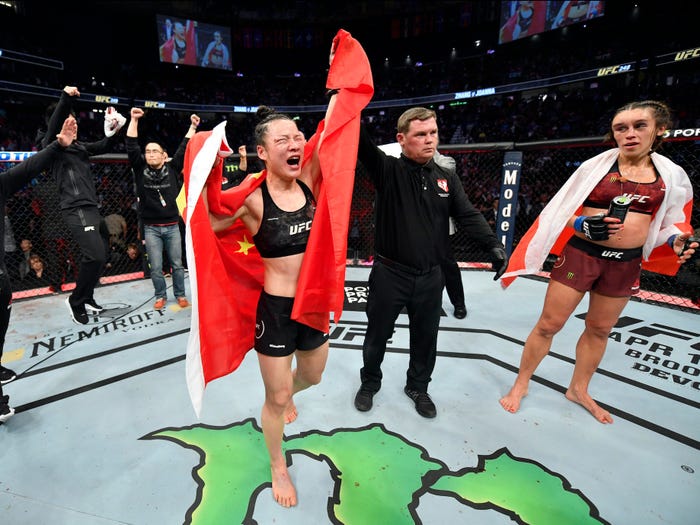 UFC strawweight champion Weili Zhang will likely return in early 2021 against "Thug" Rose Namajunas, according to her coach Pedro Jordao.

Zhang was last seen in the Octagon at UFC 248 in March — the last UFC show with a crowd before COVID-19 ousted fans from live sports.

The Chinese fighter retained her 115-pound championship after an extraordinarily brutal five-round battle with Joanna Jedrzejczyk, a fight that left the challenger temporarily disfigured after Zhang beat her beyond recognition.

The 25-minute war was regarded at the time as one of the best women's mixed martial arts contests of all time, and will likely be in the mix as a Fight of the Year winner in 2020.

There is therefore great anticipation for when Zhang will return, and her coach Jordao told MMA Fighting this week that, while the team is wary about COVID-19, it is looking at a return "in the first quarter" next year against Namajunas.

"It appears that her next fight will be against Rose, but nothing is set yet," Jordao told the MMA website. "Everything indicates that's the plan — and it makes sense, everybody knows that."

Jordao called Namajunas a "tough opponent" who appears to be more technically proficient than his fighter's previous opponents.

MMA Fighting said Jordao has been nurturing Zhang's talents since 2014 when she was a 2-1 athlete. They have won 19 matches as a team.

"She has taken every opponent down in the UFC except for [Jessica Andrade]," Jordao said.

"She's always training jiu-jitsu, she's very well-rounded. I train with her for six years and I watch her evolution closely, I know how powerful her strikes are, her technique on the ground, how strong is her guillotine and rear-naked choke, her armbar.

"She's very confident on the ground. She's not afraid to go to the ground."