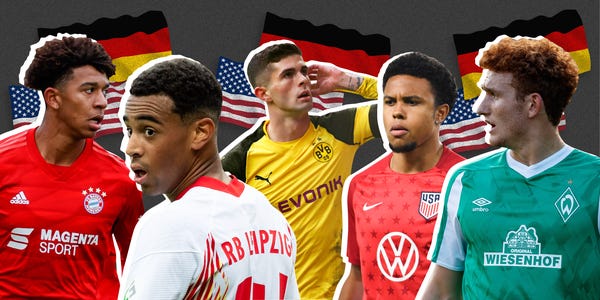 And when a 17-year-old Christian Pulisic scored his first Bundesliga goal for Borussia Dortmund against Hamburg SV in April 2016, the then 17-year-old changed the benchmark for young Americans aspiring to make it in pro soccer.

No longer did the United States' finest young stars want to follow in the footsteps of Clint Dempsey and Tim Howard and play in the English Premier League, nor did they want to try and emulate the achievements of Landon Donovan in the MLS — they wanted to go to Germany.

Currently, no top flight league in the whole of Europe boasts more Americans, nor USMNT internationals, than the Bundesliga, and several more stars have secured big money moves away from Germany to other elite European leagues in recent years.

"I would say he's paved the way for so many Americans to look at, you know, how they set their goals and their mindsets," Leipzig and USMNT midfielder Adams, 21, told Insider of Pulisic.

"Everyone is going to have there own development path. For me I was able to play in the MLS at first and then move to Europe, where as [Christian] thought that coming to Europe right away was more beneficial, so he took that route.

"His pathway and how he's developed is special, and it set the pathway for a lot of Americans believing that they are capable to make that move," Adams, who shot to stardom when he scored a last minute winner for Leipzig in a Champions League quarter final last season, said.

Having spent the majority of his youth career playing for the PA Classics, a US Soccer Development Academy club, in his home town of Hershey, Pennsylvania, Pulisic turned down Barcelona to join Dortmund in 2015.

According to the Bundesliga, the move was in-part engineered by his father, Mark Pulisic, who, with the help London-based football consultant Rob Moore, put the two parties in contact.

After moving to the Ruhr, Pulisic quickly established himself as one of the club's hottest young stars, scoring 10 and assisting eight goals in just 15 games with the Dortmund youth teams – form which earned him a first team call up less than a year after moving from America.

He made his Bundesliga debut in January 2016, and over the next three-and-a-half seasons, went on to score 19 and assist 26 in just 127 first team games before a $75 million move to Chelsea.

Since Pulisic moved to Dortmund as a teenager and took the Bundesliga by storm, a total of eight fellow Americans have made the switch to the German top flight, all seemingly attempting to emulate Pulisic in one way or another.

One of those is 20-year-old Chris Richards, who signed for Bayern Munich from FC Dallas in January 2019.

"Seeing Christian at Dortmund was definitely a factor in me choosing to come to the Bundesliga," Richards, who made his Bayern first team debut in June, told Insider.

"Christian is only two years older than me and seeing him come over to Germany and have an almost immediate impact made me very optimistic that this was the right league for me."

Richards added that he hopes to live up to [Pulisic's] legacy amid the "new wave of Americans who are coming to play in the Bundesliga."

It's not just Pulisic that attracts the Americans to Germany, however

A study by the CIES Football Observatory in 2019 showed that the average age of the starting XI's in the German top flight was just over 26 – the lowest in any of Europe's top five leagues.

Last season, Borussia Dortmund, which finished second in the Bundesliga behind Bayern Munich, boasted an average team sheet age of slightly under 26.

Adams' RB Leipzig, which finished third and made the Champions League semifinal, had an average age of just over 24.

"The main reason that a lot of young players want to come here, is [that] you see player after player given their opportunity to go out there, whether they make a mistake the first game or not, they're trusted that they are only going to get better with more minutes," Adams, who moved from the New York Red Bulls to Leipzig in 2019, said.

"For me, when I made the move to Germany, that was one of the main reasons, it was a clear development plan for me in how I can continue to get better as a player, and as a person, and continue to grow.

"It's one of the main reasons I'm really enjoying my time at Leipzig."

The Leipzig star added: "Having the youngest team in the Bundesliga year after year just goes to prove that [the club] is only going to continue to play young players.

"This is the philosophy we believe in, and we've proven that we can have a lot of success now with a young team."

The clubs take great care of their young stars

When Christian Pulisic moved to Dortmund as a 15-year-old, the club took care of him as a person as much as they did as a player, according to Doug Harris, the chairman of Pulisic's childhood club, the PA Classics.

"What was cool, and I credit Dortmund with this, is that they understood that bringing a 15-year-old from the States [was a big move]," Harris told Insider when asked his former player's switch from America to Germany.

"They made accommodations for his father to come along, and so his father was right there."

"Christian and Mark were living in an apartment over there for those years, and it was all part of Dortmund's plan to say, 'Hey, we've got a parent and we've got a player, let's develop them together.'

Adams, though older than Pulisic when he moved to Germany, says he received similar treatment from Leipzig in order to help him settle.

"Essentially, what Leipzig does to help the players that come in, is handle everything off the field so that they can focus on what's going on on the field," he said.

"I was able when I got here to have an apartment set up and everything like that already, so I didn't have to stay in a hotel when I first arrived. People don't quite notice just how big of a difference that can really make when you're not trapped in one single room, you know.

"Having my parents be able to come over every now and then and help me with that is also key, because you don't realise when you're living on your own in the US, you're still able to travel back home whenever, but now having such a large distance, it's nice to be able to see them when I can."

Adams added: "The people and the staff have been so helpful in the transition and so I'm really grateful for that side of things."

Germany also has a style of play that suits Americans

"I think so many American players are attracted to the Bundesliga because of the playing style," Chris Richards told Insider.

"The Bundesliga is a very physical and technical league and that appeals to us Americans more than any other league."

Adams concurs with his countryman, telling Insider: "From a style of play perspective, it was almost exactly the same [at the New York Red Bulls].

"We literally played the same way, high press, high energy, create chances quickly and keep the opponent on its toes the whole game. So when I came to Leipzig, it was easy to fit into the system."

Even Bayern Munich and Germany icon Lothar Matthaus, who won seven Bundesliga titles between 1984 and 2000, as well as the World Cup in 1990, believes the American style of play perfectly suits that of the Bundesliga.

"We're happy to have these young Americans in the Bundesliga because they're excellent players and they have everything we like to see in Germany," he told Bleacher Report.

"They're strong in defence, rapid in attack and they can score goals. We have a similar mentality. It's not so difficult for Americans to come to Germany. It's much harder when they have to play in Spain, for example, or Italy – different soccer, different mentality."