The transition from NFL training with the New York Jets to the NRL pre-season in Townsville has not proved to be the extraordinary challenge many expected for Valentine Holmes.

North Queensland captain Michael Morgan watched his close friend through his year-long NFL journey and has had a front-row seat for his return to league with the Cowboys. 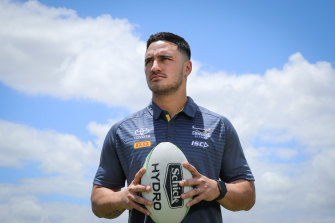 Valentine Holmes has found his feet quickly at the Cowboys.Credit:AAP

‘‘When he first got back he was finding his feet a little bit in the game,’’ Morgan said yesterday.

‘‘Everyone talked about it being this huge transition for him but it wasn’t really that long. People have longer off when they’re injured and he was training and keeping fit the whole time. It hasn’t taken too long. He’s looking very good.’’

According to Morgan, the development of Holmes’ ball-playing skills as a fullback has been the biggest focus of the pre-season given that a strong running game is already part of his skill set.
The Cowboys, who finished 14th last season, are keen to build cohesion through the spine this season. 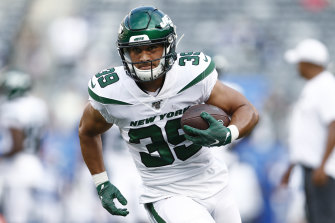 Valentine Holmes in action for the New York Jets.Credit:AP

After Ben Barba was sacked last pre-season, the Cowboys churned through four fullbacks, five five-eighths and three halfbacks due to a mix of injuries, form and representative duties.

The most stable position was at hooker, where Jake Granville played all but one game. Part of building stability is encouraging Holmes to take the ball-playing pressure off Morgan, who switched between the halves and fullback at various stages last year.

‘‘It was a little bit of a rollercoaster,’’ Morgan said of his form last season. ‘‘Some good, some bad. My strength has always been my running and I probably lost that a little bit last year. ’’
AAP