Melbourne Victory must adjust their mindset to avoid another sloppy start in their top-of-the-table clash against the Perth Glory on Sunday, according to defender Thomas Deng.

After fighting back from a 2-0 half-time deficit to defeat cellar-dwellers Central Coast in Gosford last weekend, Deng said that his second-placed team must ramp up their mental preparation to avoid a repeat. 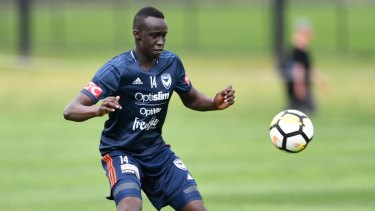 "Our mindset changes. The way we have to approach the game changes, that's the main thing," he said on Wednesday.

"I think we have to be a bit more wary. They're are a good side, they've got some top players and we can't afford to go 2-0 down like last week. We need to have a better start."

Two weeks prior to the Mariners match, Kevin Muscat's side also trailed Wellington 3-1 at AAMI Park before launching a second-half comeback to draw 3-3. It's a trend Deng would rather avoid.

"That's the most important thing for us – our start. We know that our second half is always strong," he said.

How the Victory would relish having a young Muscat available for their threadbare defensive line. Returning defender James Donachie is still two to three weeks away from first-team action and an injury to Storm Roux has forced midfielder Terry Antonis into right-back.

Having entered the A-League as a right-back, Deng has been deployed in the heart of defence for most of this season, where he's expected to remain at least until Donachie comes in.

Captain Carl Valeri hobbled off against the Mariners with a hamstring injury and has not trained this week. 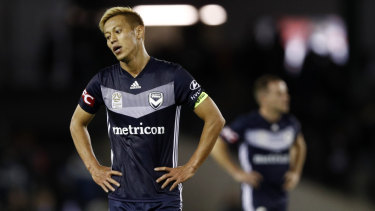 Keisuke Honda is a slight chance to return to the bench this weekend.Credit:AAP

Further up the field, Muscat will welcome Ola Toivonen back into the side, after the Swedish striker started the Mariners game on the bench due to soreness, while there's also positive news on Keisuke Honda.

The Japanese marquee hasn't played since December 14 but returned to the training pitch for higher intensity running on Wednesday, much to the delight of Deng.

"We've missed his presence on the park, and even if he comes off the bench this weekend it'll be massive for us," said the 21-year-old.

A Victory win on Sunday will bring to within one point of league leaders Perth, and Deng said that reversing his side's 3-2 loss against the Glory at AAMI Park in October is forefront in their minds.

"I think it'll give us extra motivation," he said.

"I don't like using the word motivation, but I think it'll give us a bit more of a boost – beating the top side and putting a bit more pressure on them for the weeks to come." 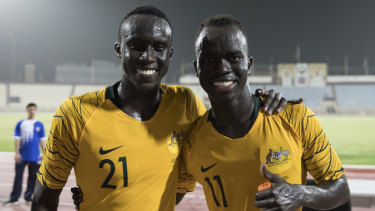 He said that while he believes the addition of the Western Melbourne team for next season will be positive for the A-League, he's not casting a second eye at their progress after they announced Greek international Panagiotis Kone as their first marquee signing last week.

"I've heard a bit about it, not too much. I'm happy for the league to add another team in. It's something new, something fresh. I think it'll be good for the fans."