The 31-year-old ended the fight with 20 seconds left on the clock in the opening round. 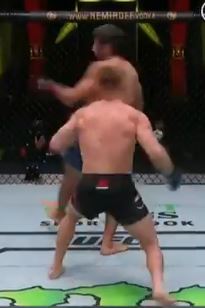 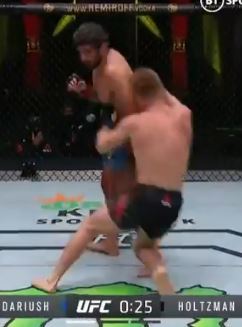 Dariush's spinning strike came as Holtzman threw his own hook and the ref stopped the fight before any more damage could be done.

Despite his highlight-reel finish, the Assyrian-American missed weight by 2lb before the fight.

Dariush did not receive a bonus for the KO, but admitted it should have been given to Holtzman.

He said: “I gotta say even though I won, I’m super embarrassed how it went yesterday.

“I missed weight. Dana, if you’re listening and that was performance worthy, give it to Scott. That’s the right thing to do.”

Dariush revealed the spinning elbow was inspired by a UFC video game andsome advice from his friend's son.

He said: “My friend’s son, Billy, sent me a message on Instagram and he was like: ‘Hey, you should try to knock him out with a spinning back fist. I’ve been playing the video game and in the game you do it really well’.

"I do it a lot in training, I used to do the spinning back kick a lot, but then again I was wild.

"As you get older, you try to clean things up. If you watch the beginning of the fight, I’m trying to be sharp with my boxing, hands up, don’t drop your hands, slip, counter… Don’t get wild.

"For maybe the first minute and a half, I did that and then, after that, it was just old Beneil."