After Week 1 was defined by huge upsets, some order has been restored to the N.F.L. this week with 13 of 14 favorites prevailing leading into Sunday night’s game. The road to those victories was rocky, however, as several star players have been lost to injuries — some of which appear to be season-ending.

Here’s what we learned:

The Atlanta Falcons have a flair for the dramatic — in a bad way. A franchise that was already nearly synonymous with a dubious set of numbers — 28-3 — added a new score for their team’s fans to loathe: 29-10. That was where things stood at halftime on Sunday before a truly epic second-half collapse against the Dallas Cowboys, who won, 40-39. Dallas scored on six of the team’s seven second-half possessions, but still needed a bit of a miracle in the form of an onside kick in the game’s final two minutes that was recovered by the Cowboys despite the ball rolling right past multiple Falcons players on its way to Dallas’ C.J. Goodwin.

Preseason games might be important. Theories will abound for this week’s huge rash of injuries to star players, and many will focus on the lack of preseason games. The hardest hit team has been the 49ers, who added quarterback Jimmy Garoppolo, running back Raheem Mostert and defensive end Nick Bosa to an injury report that already included George Kittle and Richard Sherman. But San Francisco was hardly alone. The Giants lost running back Saquon Barkley to a knee injury and Denver lost quarterback Drew Lock for several weeks with a shoulder injury.

There is a strong likelihood that Barkley and Bosa are done for the year. 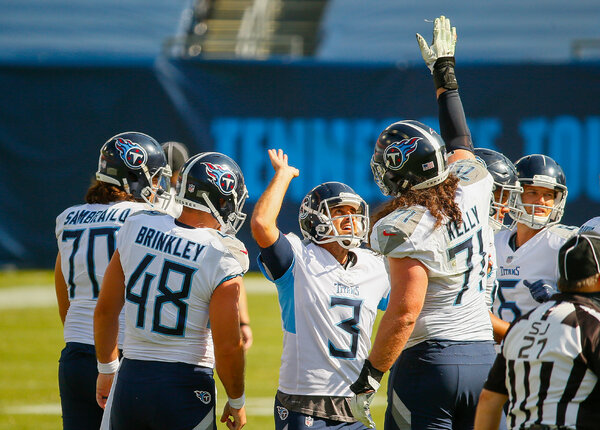 Stephen Gostkowski prefers for the stakes to be high. The former kicker for the New England Patriots has had quite a first season in Tennessee. The 36-year-old has already missed three field goals and two extra-points through just two games, but when his team has truly needed him he’s been electric. He closed Week 1 with a 25-yard game-winner against Denver, and on Sunday he put the Titans ahead to stay with a 49-yarder in the final minutes against Jacksonville. Tennessee’s defense appears to need some work, but quarterback Ryan Tannehill is red-hot with six touchdown passes through two games, running back Derrick Henry has fought his way to 200 yards on the ground, and if they can continue to set him up for game-winners, Gostkowski appears to have his team covered.

Justin Herbert was farther along than anyone thought. It seemed like an ideal situation in Los Angeles, as the Chargers had a quarterback for the present in Tyrod Taylor, and one for the future in Herbert. But a somewhat mysterious chest injury resulted in Taylor being a last-minute scratch on Sunday and Herbert, in his first N.F.L. action, very nearly beat Patrick Mahomes and the Kansas City Chiefs (pause for emphasis). Herbert was nothing short of fantastic against the defending Super Bowl champions, throwing for 311 yards and a touchdown, with Mahomes and Co. needing a 58-yard field goal from Harrison Butker in overtime to outlast the Chargers’ youngster.

We should keep our Packers record books handy. Green Bay’s offense has been nothing short of phenomenal through two games, scoring a combined 85 points in wins over N.F.C. North rivals. It’s just the fourth time in franchise history that the Packers have scored 40-plus in consecutive games, according to Pro Football Reference, and they mixed things up by following Davante Adams’s dominant Week 1 — he tied a 78-year-old franchise record with 14 receptions — by relying largely on running back Aaron Jones in Week 2. Jones was the team’s leading rusher and its leading receiver, with 236 yards from scrimmage and three total touchdowns.

The Ravens never lose (in the regular season). Baltimore won its 14th straight regular season game, blowing out the Houston Texans, 33-16, despite Lamar Jackson throwing for a relatively modest 204 yards and one touchdown, and none of the team’s celebrated runners having more than 73 yards on the ground. It was a full-team effort, with Gus Edwards, Mark Ingram, Jackson and the rookie J.K. Dobbins combining to run for 230 yards on 37 carries, while the team’s defense successfully held Deshaun Watson in check, putting some of their own points on the board thanks to L.J. Fort’s fumble recovery for a touchdown.

One* Sentence About Sunday’s Games

*Except when it takes more.

Buccaneers 31, Panthers 17 Tom Brady is still not up to his typical New England standards — he threw for 217 yards, one touchdown and one interception — but the Buccaneers don’t need him to air the ball out if Leonard Fournette is going to run for 103 yards on just 12 carries and the team’s defense is going to pile up five sacks while forcing four turnovers.

Cowboys 40, Falcons 39 The story of the day will be Atlanta’s brutal collapse, but we shouldn’t lose sight of the fact that Dak Prescott threw for 450 yards while running in three touchdowns. The previous record for passing yards in a game with three rushing touchdowns was the 317 put up by Jack Kemp of the Buffalo Bills in 1963.

Titans 33, Jaguars 30 Second-guessing Jacksonville’s personnel decisions is nearly a sport unto itself, but ditching Nick Foles in favor of Gardner Minshew as the team’s starting quarterback appears to have been the right move: Foles couldn’t beat out Mitchell Trubisky for the starting job in Chicago, and Minshew, showing all kinds of pluck and quite a bit of talent, has six touchdown passes through two games.

Chiefs 23, Chargers 20 (overtime) It says something truly remarkable about Harrison Butker that his trotting onto the field to potentially win the game from 58 yards out seemed like a forgone conclusion — and that the extreme confidence in the team’s kicker didn’t waver for a second, even when he was forced to kick a second time because of a last-second timeout.

Ravens 33, Texans 16 Losing to Baltimore is forgivable, but Houston’s offense looks absolutely pedestrian without wide receiver DeAndre Hopkins, making the shocking off-season trade sting even more than it did at the time.

Packers 42, Lions 21 Detroit is off to a start that’s far uglier than its 0-2 record can possibly suggest, as the team pulled ahead of Green Bay, 14-3, late in the first quarter, only to lose by 21 points — a week after blowing a 17-point fourth quarter lead against Chicago.

Colts 28, Vikings 11 It looked like Philip Rivers was getting ready for a second straight very long Sunday when he opened the game by throwing an interception in the red zone. But from that point forward, Rivers settled down, rookie running back Jonathan Taylor took over (101 yards and a touchdown) and the Indianapolis defense made up for last week’s embarrassment against Jacksonville by snagging three interceptions and forcing a safety.

Cardinals 30, Washington 15 Arizona is delivering on its preseason hype so far, with quarterback Kyler Murray taking a leap in his second season, with plenty of help from running back Kenyan Drake and wide receiver DeAndre Hopkins. With the Cardinals’ next three games coming against Detroit, Carolina and the Jets, a 5-0 start is extremely realistic.

Bills 31, Dolphins 28 Give Ryan Fitzpatrick some credit: The journeyman quarterback is not going to give up his job easily. He followed up a disastrous Week 1 by having a terrific effort (317 yards, 2 touchdowns) against Buffalo’s stellar defense, very nearly pulling off what would have been a stunning upset.

Rams 37, Eagles 19 A matchup of Jared Goff and Carson Wentz is always going to raise the stakes, as the quarterbacks went with the first two picks in the 2016 draft, but this one was all Goff, who demolished his friendly rival by throwing for 267 yards and three touchdowns.

49ers 31, Jets 13 San Francisco fans might want to start Googling “Pyrrhic victory” as the 49ers won this game in a rout, but likely lost defensive end Nick Bosa for the remainder of the season and may be without quarterback Jimmy Garoppolo (ankle) and running back Raheem Mostert (knee) in the coming weeks.

Steelers 26, Broncos 21 That this game was so close is a testament to Denver’s perseverance, as the team came in without running back Phillip Lindsay or linebacker Von Miller, and lost starting quarterback Drew Lock in the first quarter, only to find itself on the verge of a potential upset that fizzled with a fourth-down sack with less than two minutes left in the fourth quarter.

Bears 17, Giants 13 If Saquon Barkley is truly out for the season with what is feared to be a torn anterior cruciate ligament, the 0-2 Giants might as well settle in for a season of 14 or more losses and a chance at the No. 1 pick in next year’s draft.