While Southampton are stuck in a rut, frantically trying to escape the trap door, neighbours Bournemouth are able to look up once again. 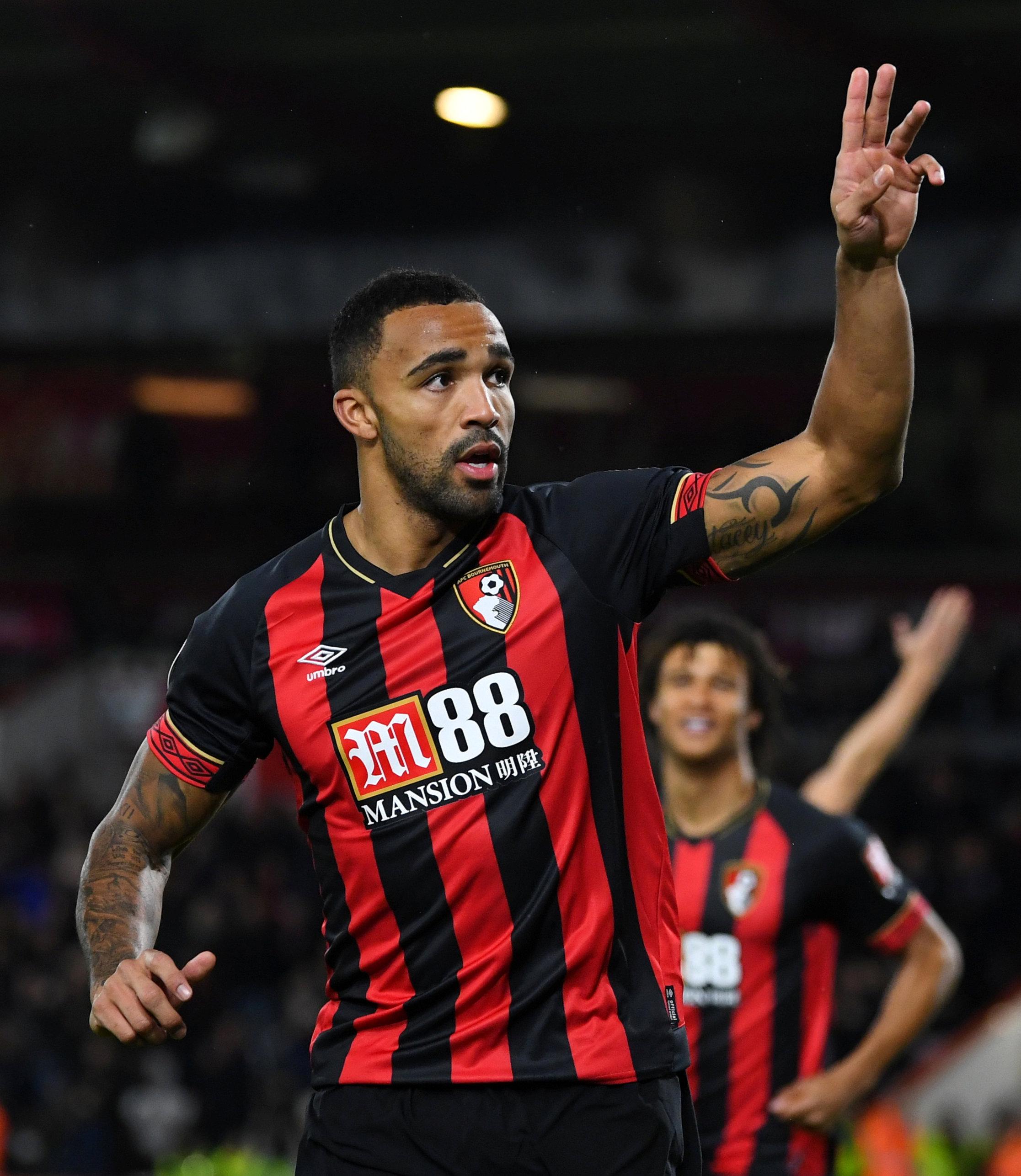 Eddie Howe’s men ended one of the most bizarrely impressive barren runs the Premier League has ever seen last night with this routine victory over Huddersfield.

Callum Wilson, surely a contender to be with England at the Nations League next summer, scored again against the Terriers  and teed up Ryan Fraser to halt the Cherries’ four-game losing spell.

Having admirably held Man City for 45 minutes, narrowly lost to Arsenal and suffered a last-minute defeat to Man United, quality was never the concern for Howe.

Victory takes his team above Jose Mourinho’s moneymen at Manchester United and into that coveted sixth place. 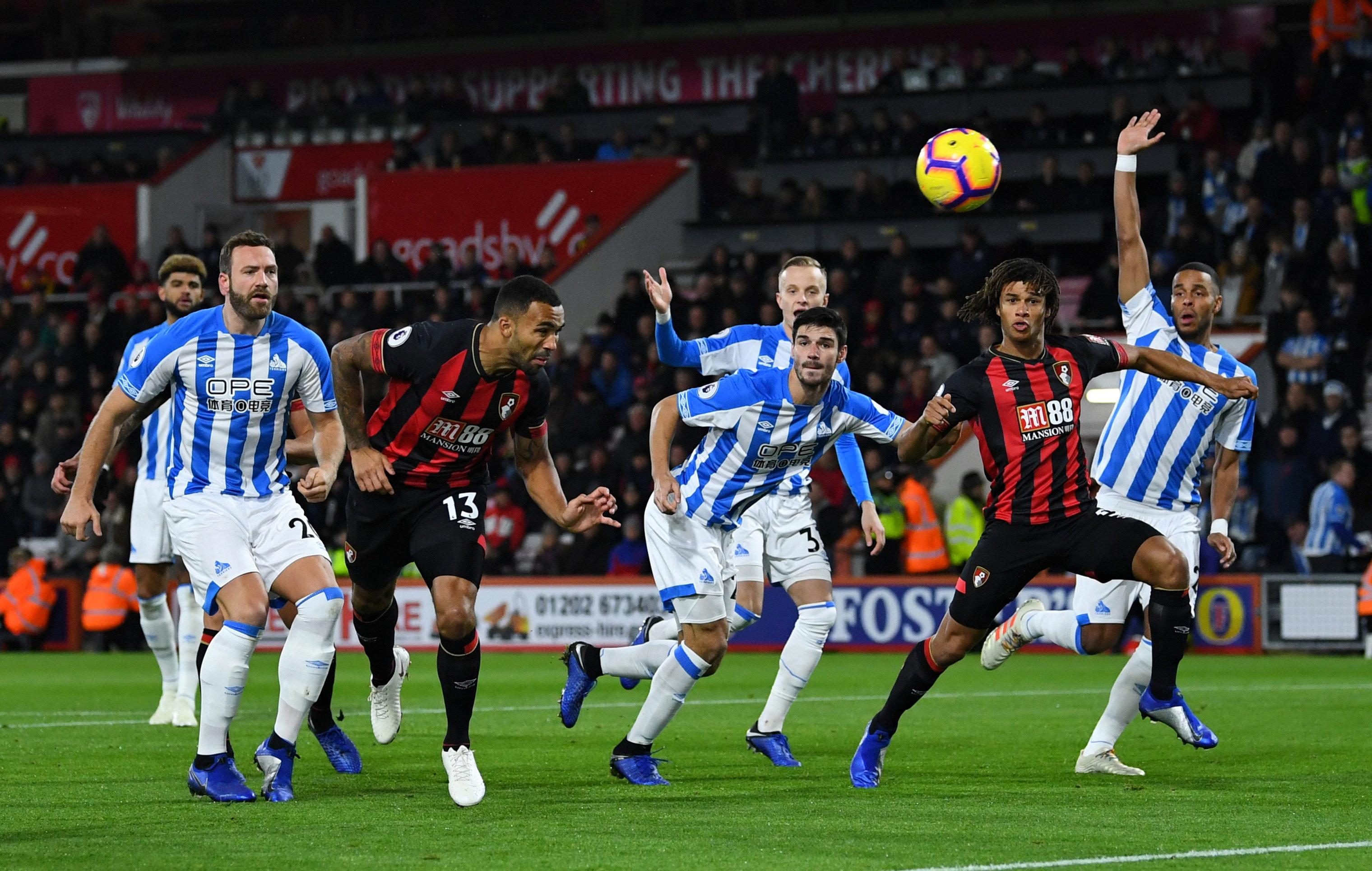 Tiny Bournemouth are already able to dream of the Europa League again, those midweek away days across the continent.

Like Burnley of last season and Stoke of 2011, Bournemouth could be the surprise package this year with a European tour within reach.

And their intent was clear from the first whistle.

Howe’s men attacked with pace and fluidity with it taking only five minutes for their opening goal when Josh King was hauled down by Erik Durm. 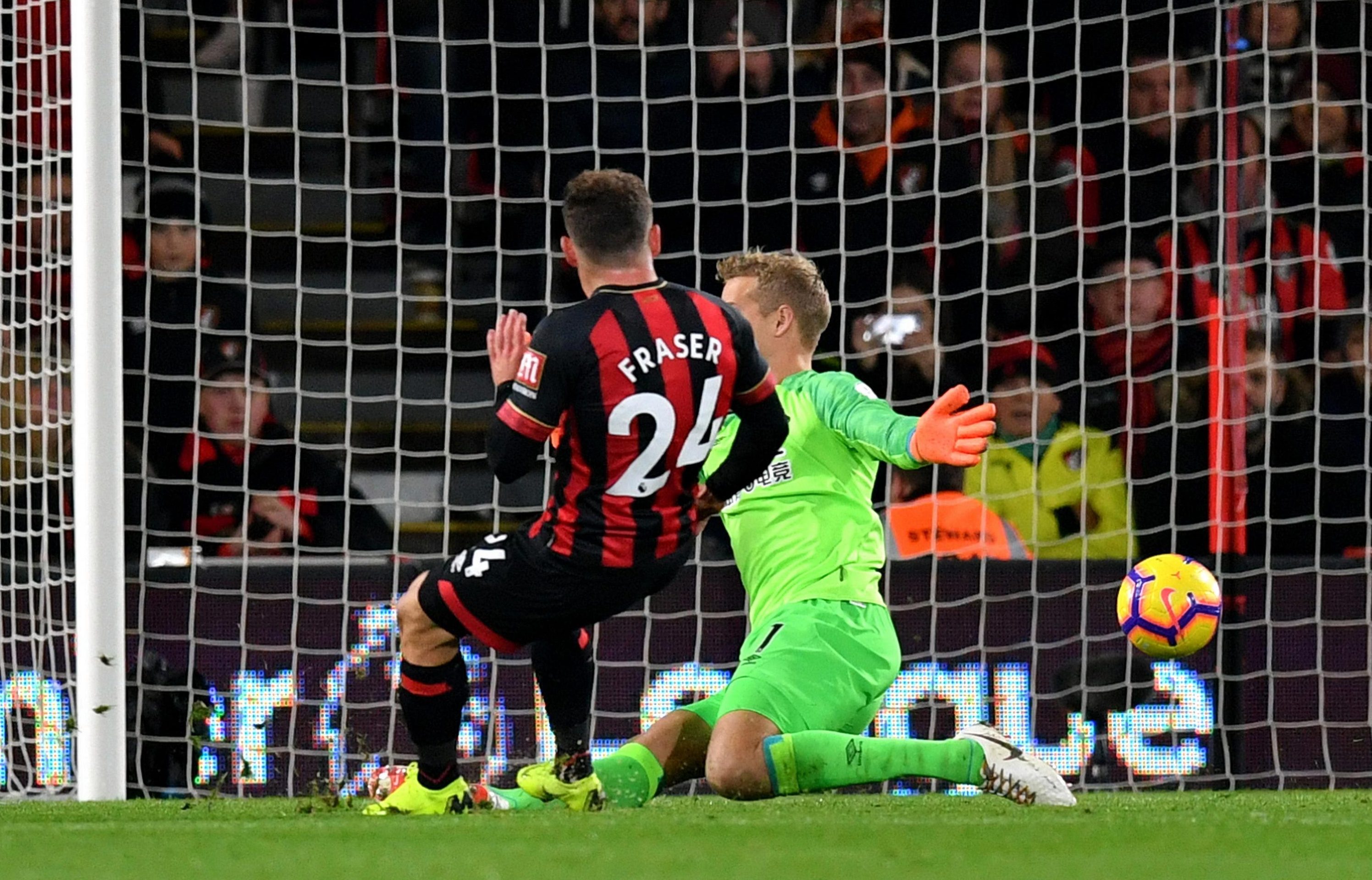 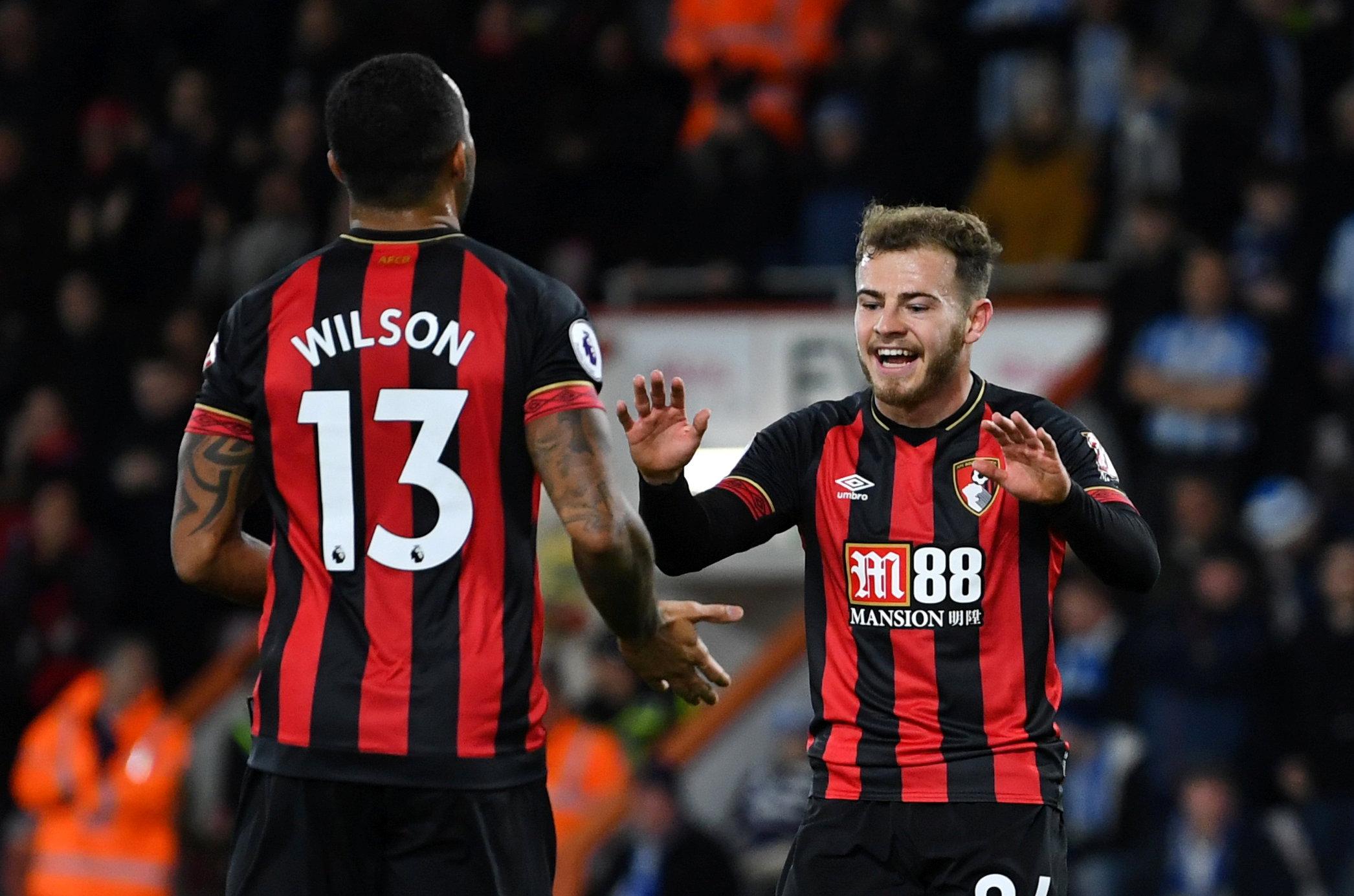 Assist king Ryan Fraser delivered a free-kick onto Wilson’s head for his ninth goal of the season after Matias Jorgenson had played him onside.

Gareth Southgate’s selection of the 26-year-old in the England squad has been justified as he moved level on league goals with Harry Kane, Raheem Sterling and Sergio Aguero.

How Wilson must wish he could play Huddersfield every week, with this sixth goal in three games against the Terriers.

And Fraser went top of the charts for Premier League assists with his seventh of the season. 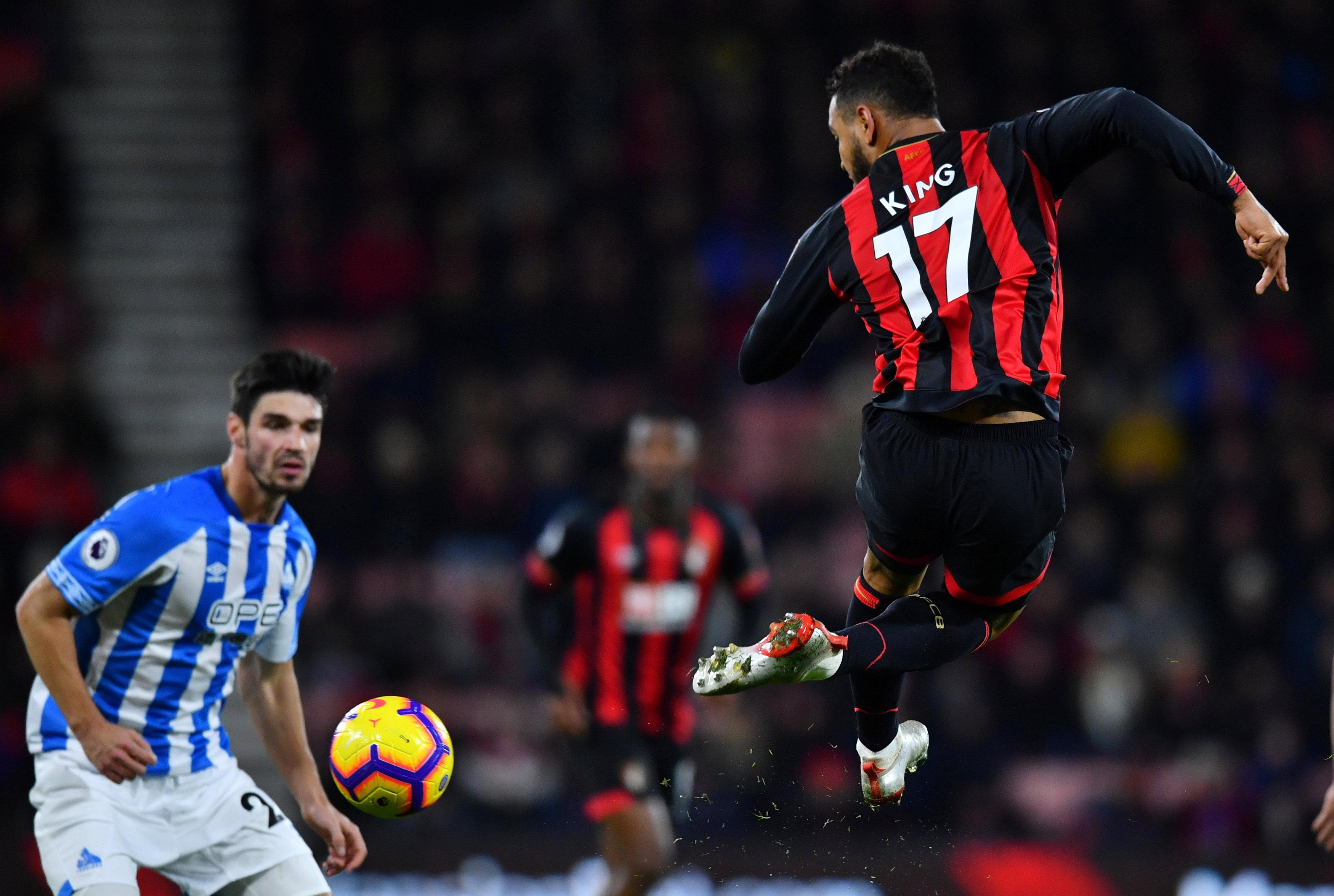 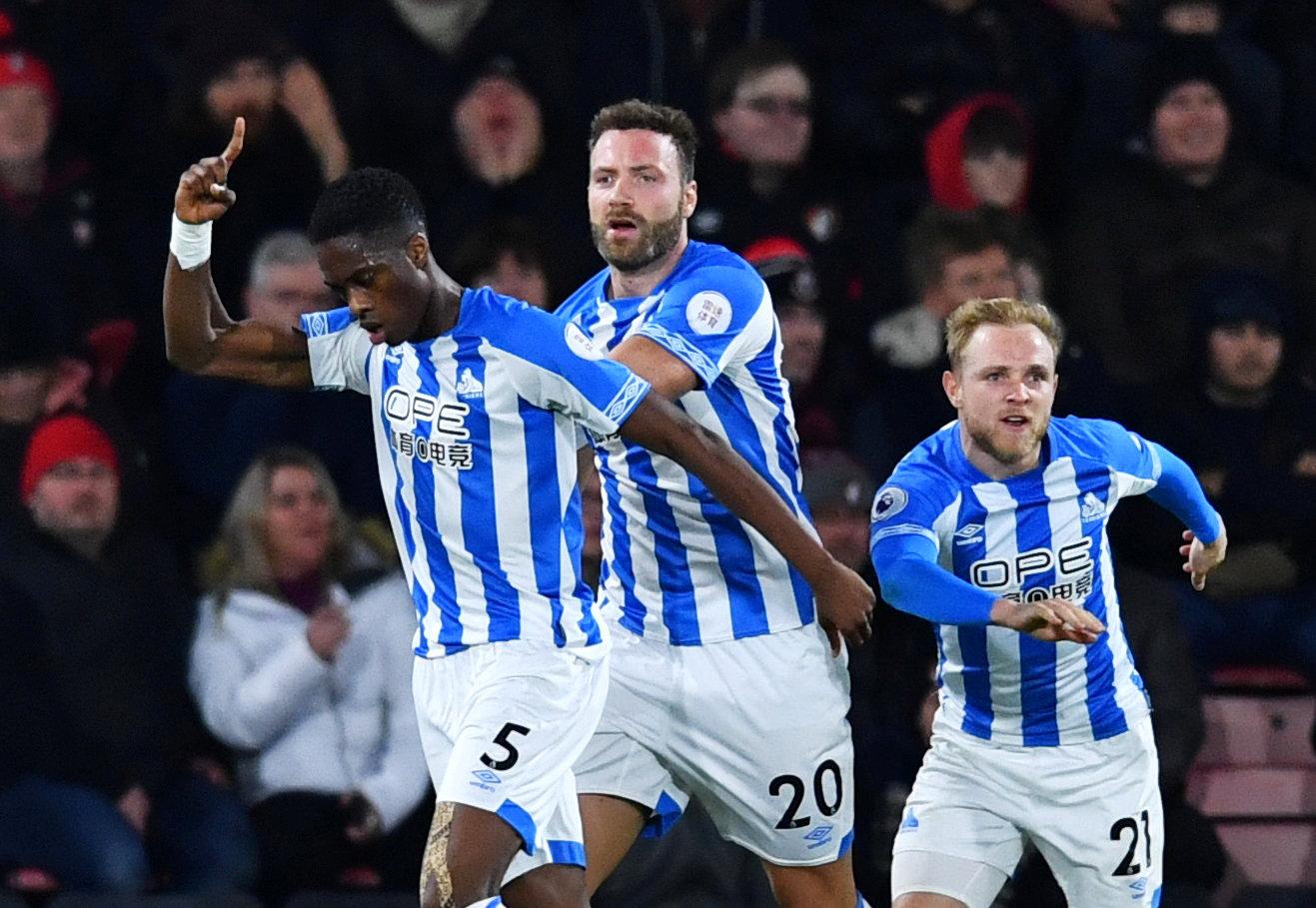 You can keep your Silvas and Ozils.

Wagner’s side were under siege with Wilson forcing Lossl to tip over from close range before a King header went wide.

Huddersfield must have seen the second coming.

A swift counter-attack begun by King saw Wilson released down the right and deliver a perfectly-weighted pass to the untracked Fraser.

Lossl’s hesitation off his line was punished when Fraser’s left footed shot clipped his legs but nestled in the back of the net.

Despite Huddersfield heading towards an eighth league defeat of the season, boss Wagner was unmoved.

Unlike his friend and former boss Jurgen Klopp up at Anfield, this German contained his emotions.

And his team reflected that as they remained.

Huddersfield issued warnings to the hosts when the big man up front, Laurent Depoitre, ran unmarked into the penalty area and drew Asmir Begovic into a save with a powerful header. 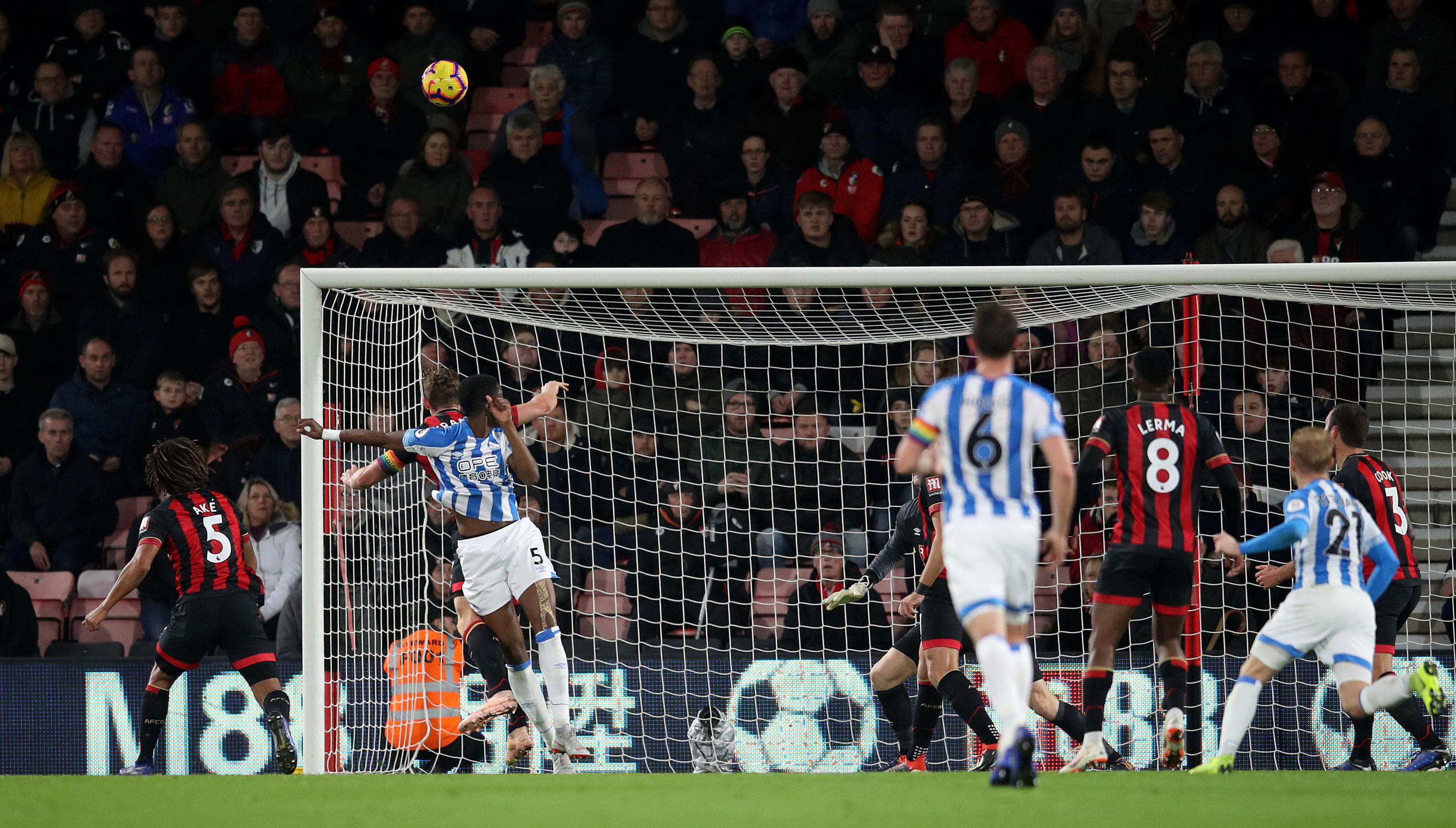 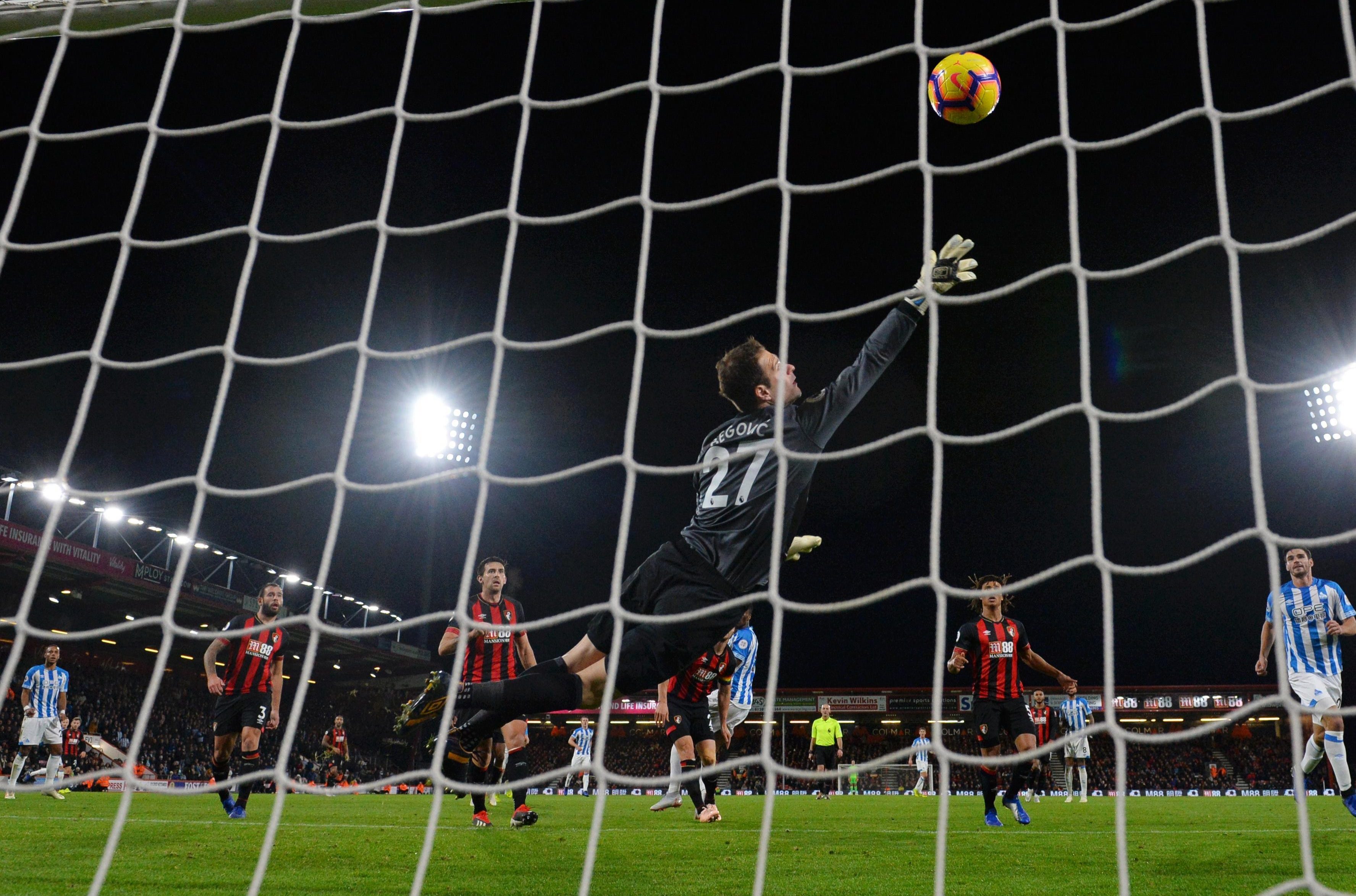 But the former Chelsea keeper was powerless Terence Kongolo’s looping header seven minutes from the break.

Mooy’s cross was nodded on by Christopher Schindler, headed back into the danger area by Matias Jorgenson before Kongolo beat Begovic. Wagner afforded himself a double-fisted celebration.

Bournemouth threatened to close the game off in the second half but King dragged his shot wide when teed up by Wilson.

It was Huddersfield who had the better chances.

Charlie Daniels failed to clear Philip Billing’s cross, leaving Mooy to force Begovic into a fine save with his feet. 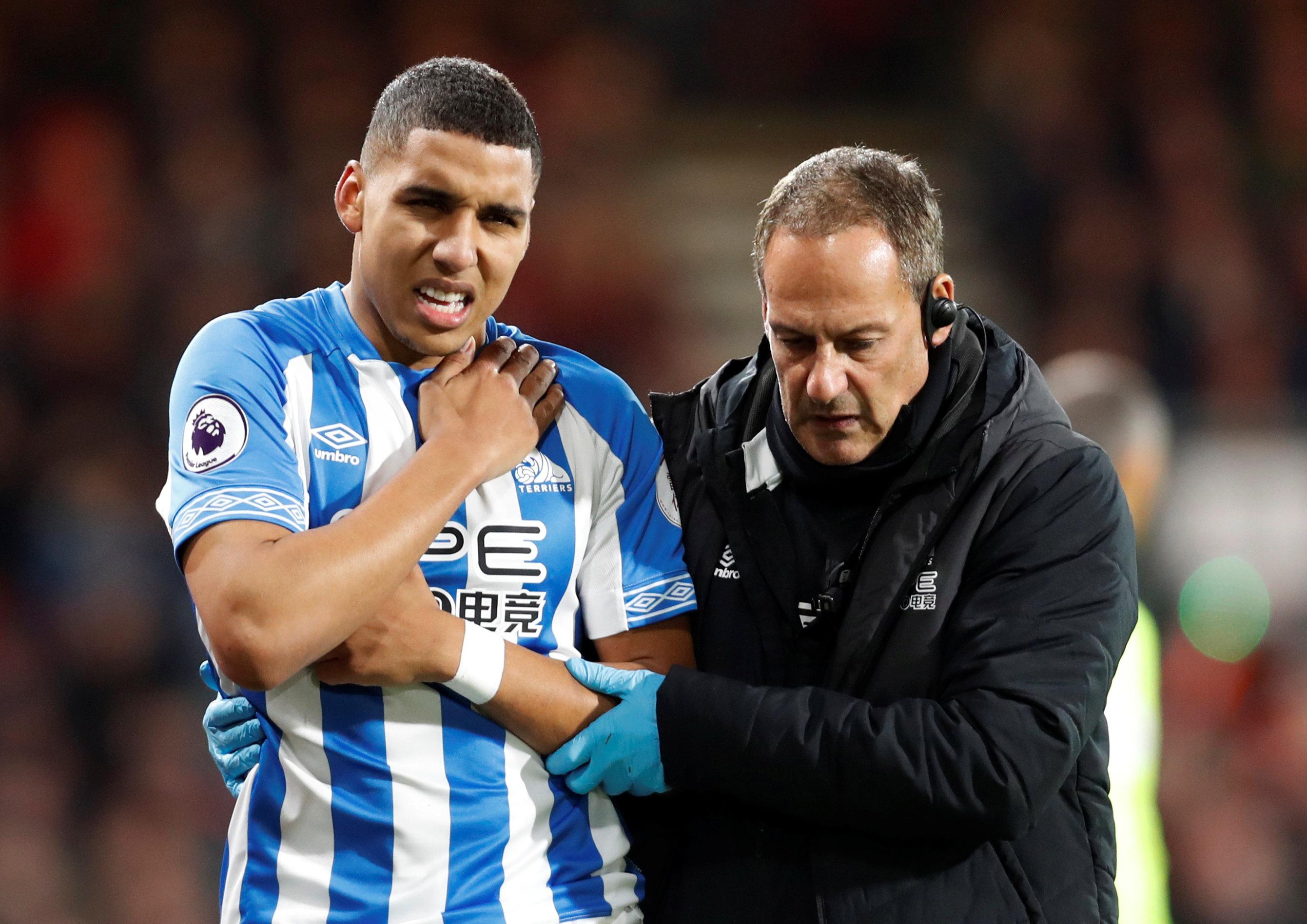 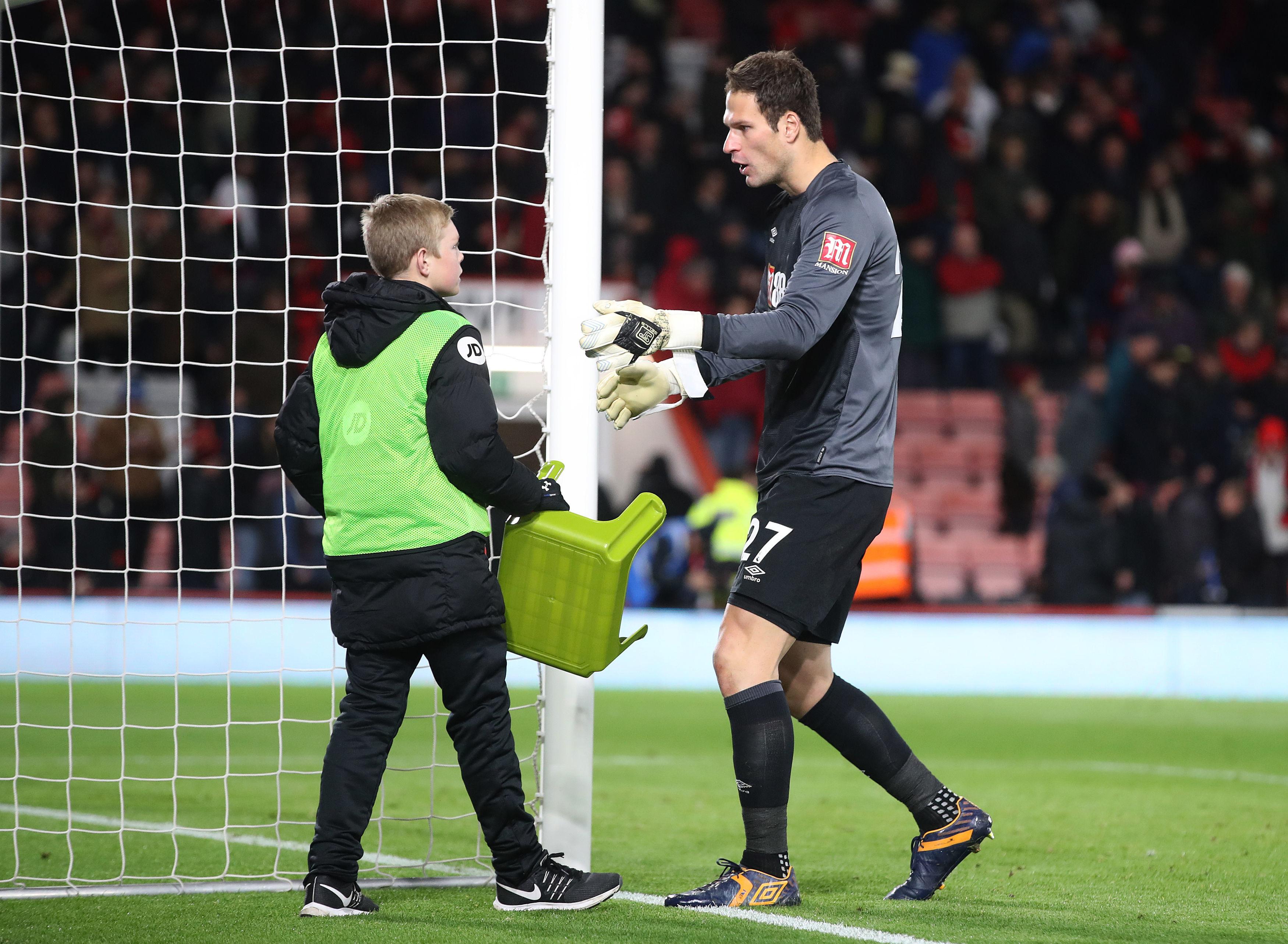 The visitors looked to use the size of their 6ft3in striker Depoitre but the big Belgian couldn’t make the difference.

Wagner's side are the lowest scorers in the Premier League and that could end up being fatal for them.

Huddersfield’s fortunes were summed up when substitute Abdelhamid Sabiri came off clutching his arm just three minutes after coming on.

It was another one of those nights.