WWE champion Drew McIntyre has revealed that the sword he used during his entrance on RAW belongs to Vince McMahon!

The Scottish Psychopath defeated Randy Orton to capture the red brand's top prize for a second time on Monday. 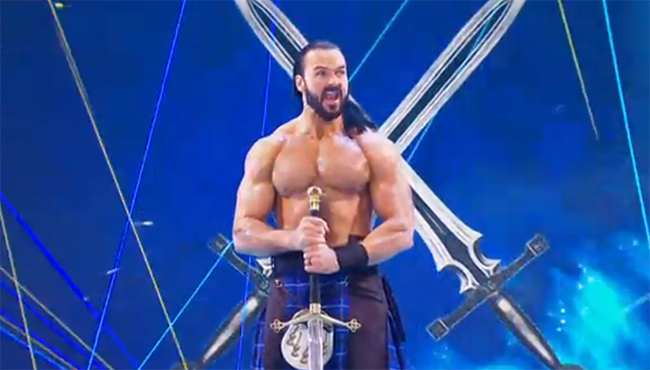 It was also the first time in five years the company's top belt had changed hands on an episode of RAW.

Yet McIntyre made almost as many headlines for his special entrance.

Donning a kilt, the 35-year-old stepped onto the stage with a sword that he then plunged into the ramp to unleash some new pyrotechnics.

For storyline purposes, McIntyre was gifted the blade by his old friend Sheamus in a backstage segment earlier on Raw.

But the man himself has since admitted that the sword actually belongs to WWE chief McMahon.

He told Ryan Satin of WWE on FOX: "Recently, we [Vince McMahon and I] had a conversation about it.

"I was just thinking about walking out with a kilt. But, obviously, he likes to take it a little bit further.

The sword I had is actually Vince's sword. It was gifted to him by Stephanie [McMahon] and Hunter [Triple H]

"Suddenly, we had the sword and the pyro, and he was very hands on with this.

"The sword I had is actually Vince's sword. It was gifted to him by Stephanie [McMahon] and Hunter [Triple H].

"I did not know how it started but I believe the conversation went, 'we need a sword and we don't have one.'

"I believe Hunter and Stephanie were in Scotland and they got it from a legitimate sword manufacturer.

"I'm from Scotland but I've never seen the sword store! They went out of their way to get him a legitimate Scottish Claymore as a gift.

"And suddenly I'm walking to the ring and Hunter says 'didn't I get that for Vince?' And I was like, 'yes, you did!'"