Here are seven things we learnt from Raw: 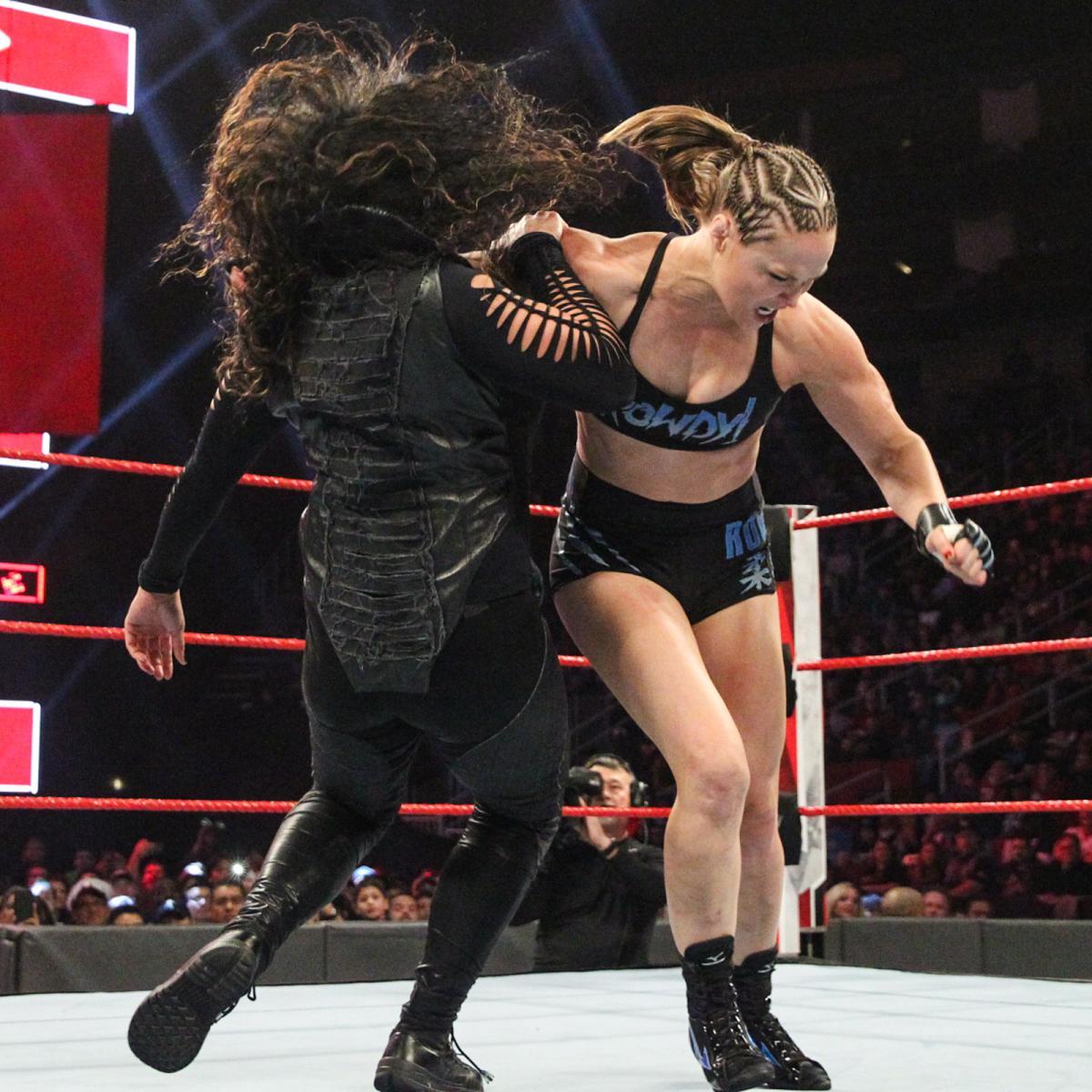 The show opened with Rousey and Natalya v Nia Jax and Tamina Snuka, but it turned to chaos when the Riott Squad arrived before the opening bell.

With help from Nia and Tamina, the Squad put Natalya through a table – forcing Rousey to return with replacement partner Ember Moon later in the night.

The story of the match was that Nia Jax – who challenges Rousey for the women’s title at TLC – was reluctant to get in the ring with Ronda and tagged out before they could lock up.

The finish came when Ember hit Tamina with the Eclipse and Ronda locked in the arm bar for a tap-out victory.

Nia has been on poor form since turning heel – both in the ring and on the mic – and Ronda will have to pull out something special to drag Jax to a good match at TLC.

Let’s hope the rivalry is short lived and Ronda segues into continuing her feud with Becky Lynch and/or Charlotte Flair, who will also be on the card at TLC. 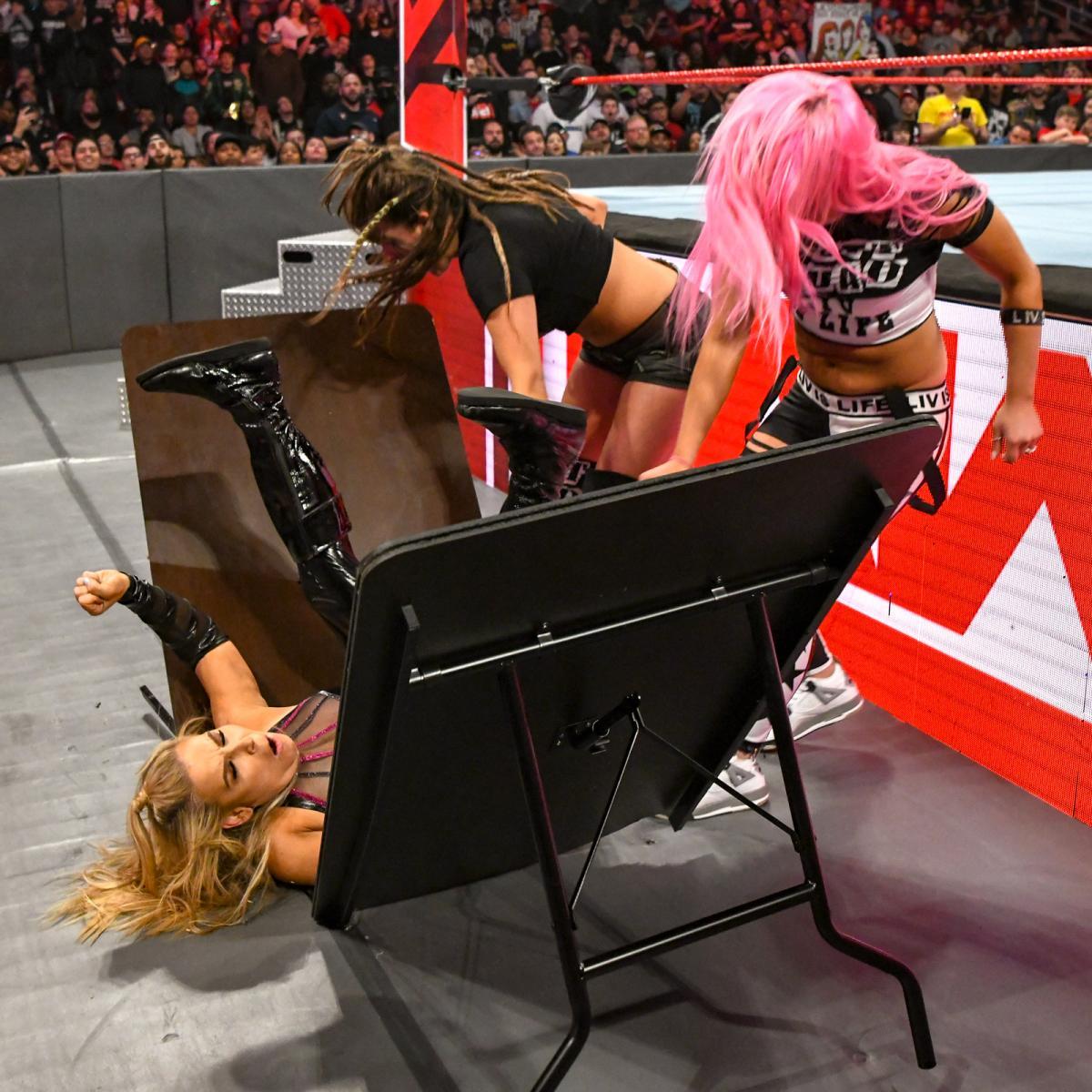 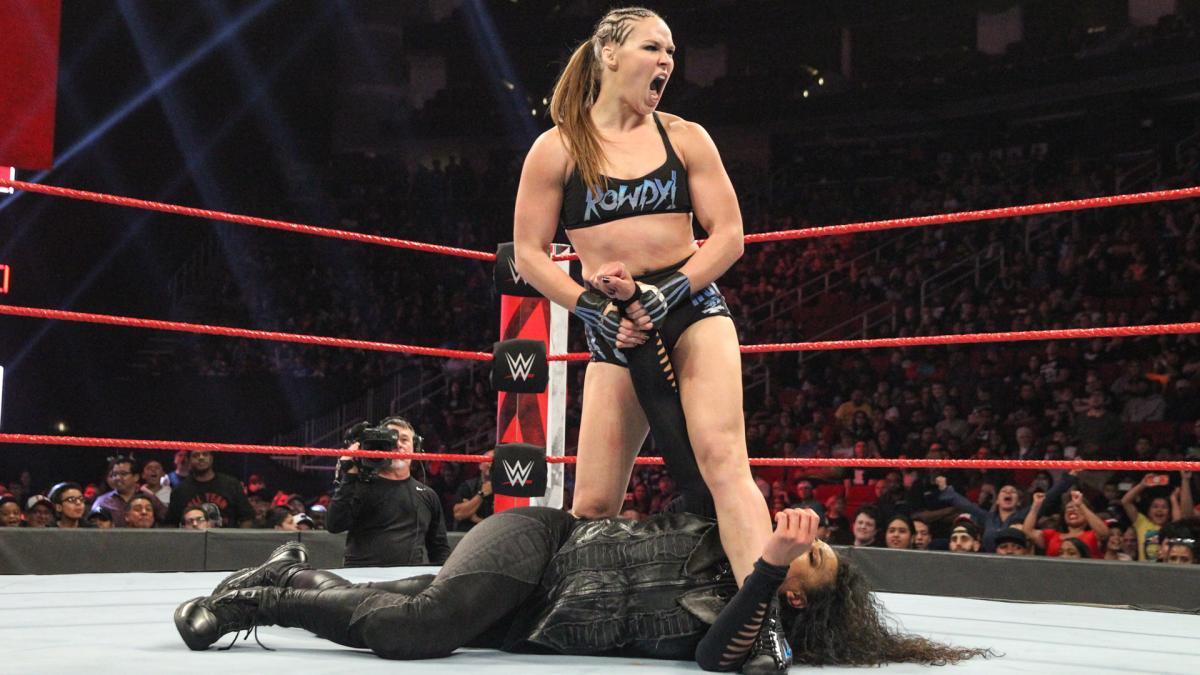 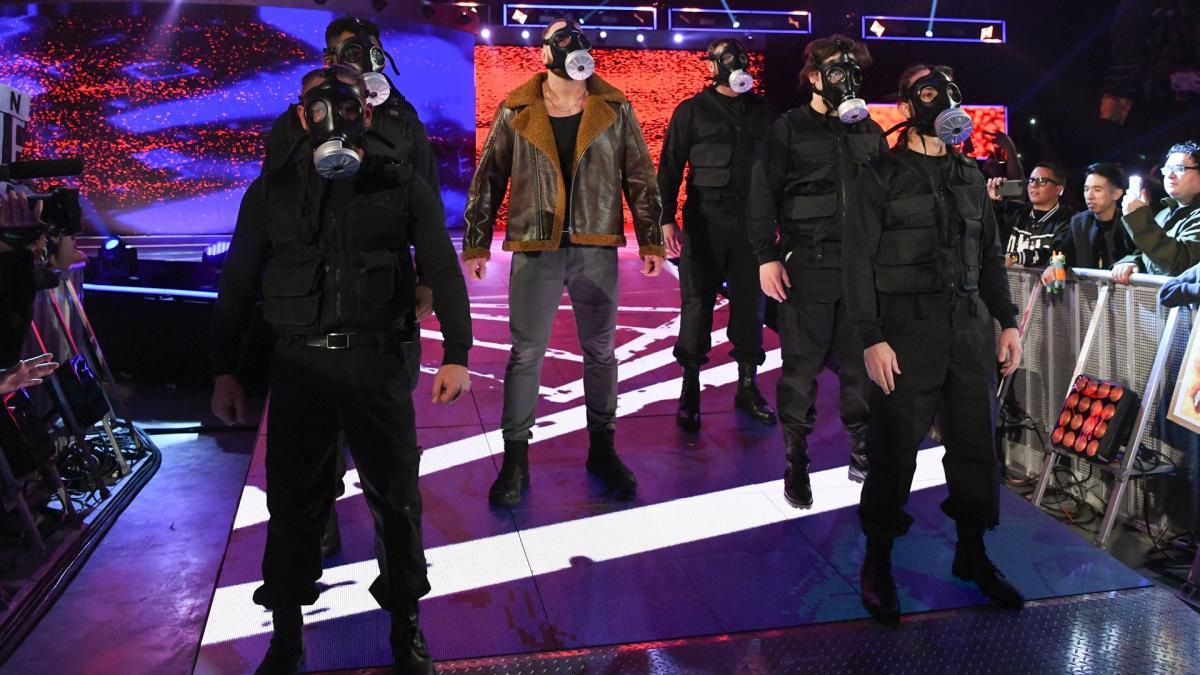 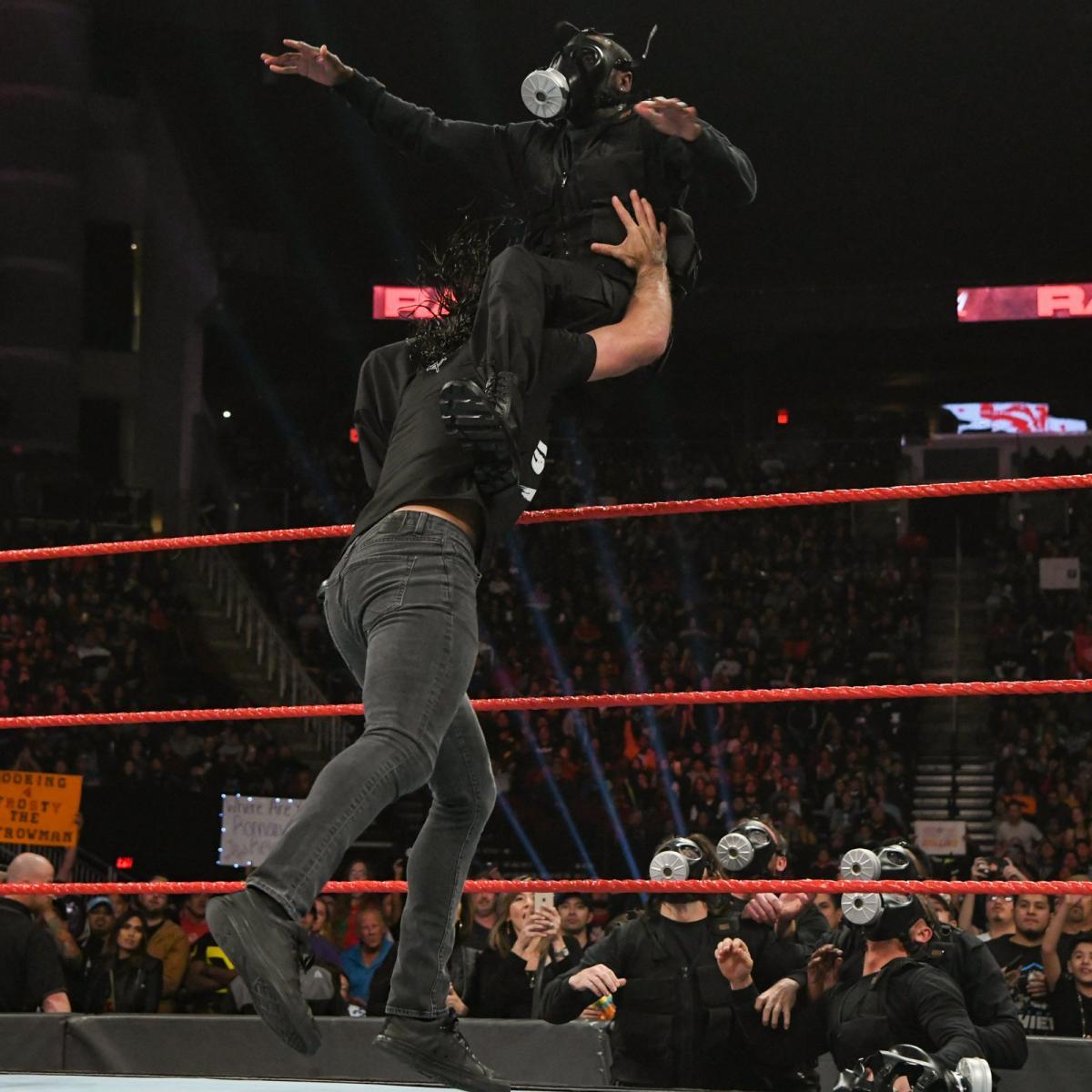 “The Lunatic Fringe” lived up to his name by arriving with a SWAT team and wearing a gas mask and sheepskin coat – looking like a post-apocalyptic Del Boy.

Has WWE dropped the ball with Ambrose? His heel turn could have turned him into a vicious, topline villain – instead he seems to be playing a comedy hypochondriac.

Ambrose admitted that over the past few weeks he’d said a few things to “trigger” Rollins – a not-so-subtle backtrack on the things WWE scripted him to say about Roman Reigns leukaemia.

But Rollins ambushed Ambrose and took out his SWAT team (fat lot of good they were), which turned into an exciting brawl between Rollins and Ambrose in the crowd.

Back in the ring, Ambrose took control and laid out Rollins with Dirty Deeds. Will the same thing happen when they fight over the Intercontinental title at TLC?

“Scottish Psychopath” (to be fair, Drew has been excellent in recent months).

He awarded Drew a “gold medal of excellence” for his work on Raw, but the love-in was interrupted by Drew’s former partner Dolph Ziggler.

Ziggler reminded Drew they had run roughshod over Raw together, but Dolph’s invitation to the party seemed to have been lost in the post.

McIntyre said that Dolph was never the brains of their outfit – and “The Showoff” has outgrown his use now that he’s helped Drew get to the top of Raw.

Dolph then hit his former buddy with a Zig-Zag, setting up a one-on-one match.

McIntyre battered Ziggler but McIntyre’s TLC opponent Finn Balor came out and drop kicked Drew at ringside when the referee was distracted.

McIntyre made it back into the ring before the ref’s 10-count, but walked into a Ziggler super-kick for the 1-2-3 – McIntyre’s first pinfall loss since returning to WWE. 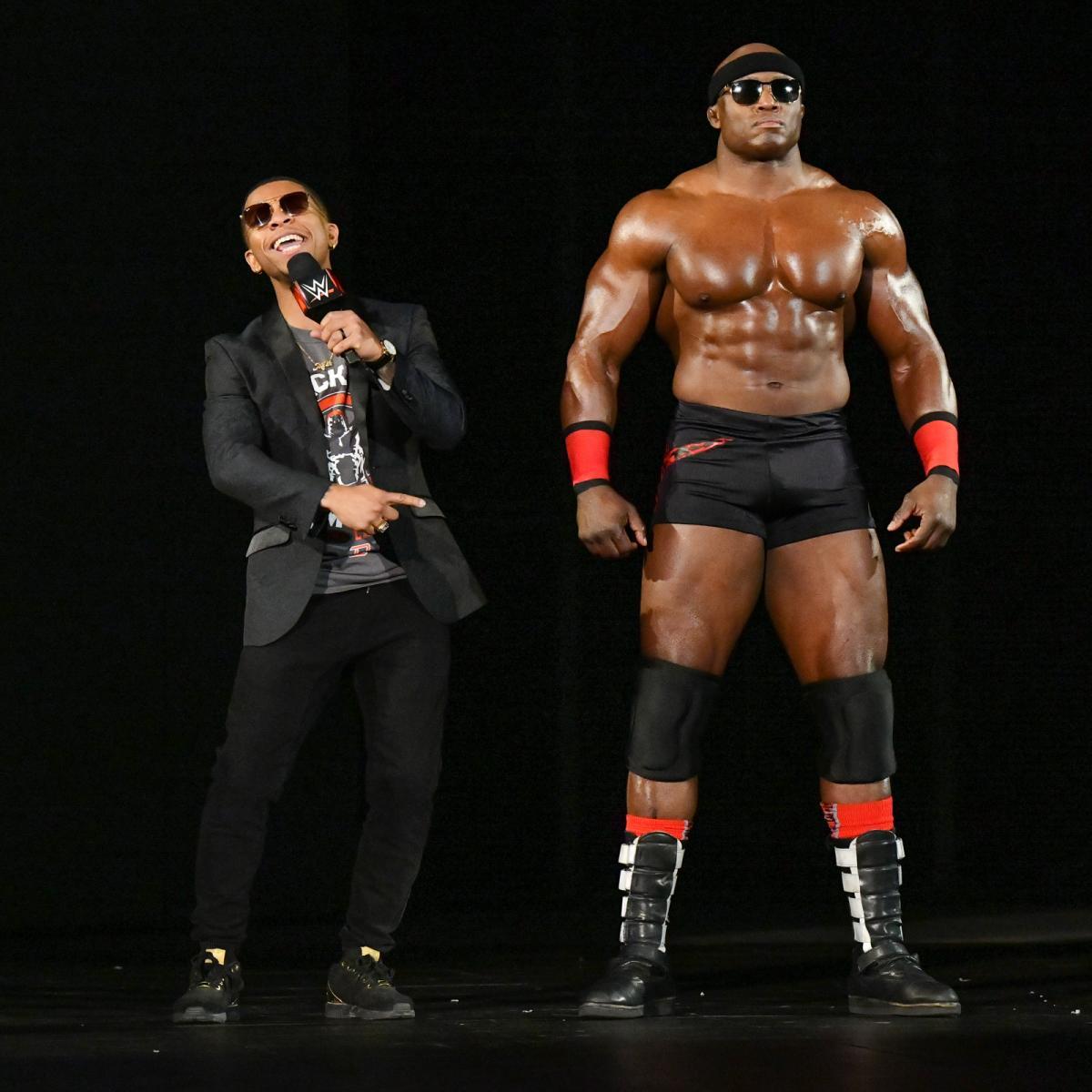 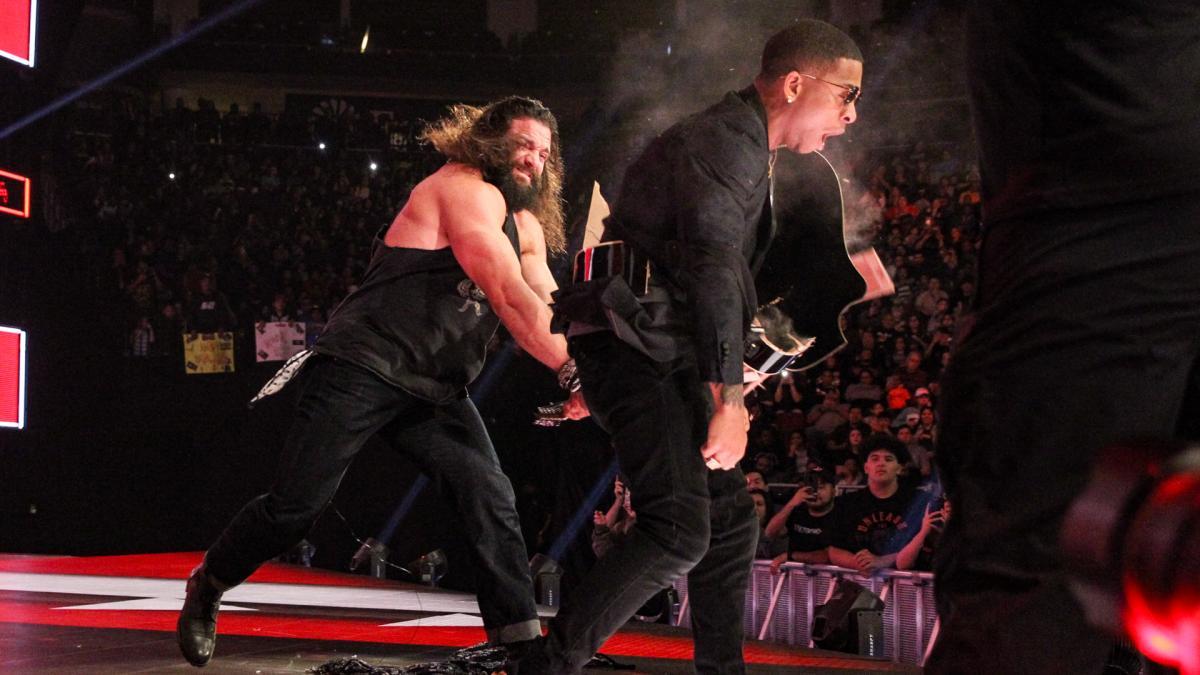 Bobby Lashley is a big poser

Elias came to the ring to tell the fans he’d been looking for his TLC opponent Bobby Lashley – because he wanted to wrap a guitar around Lashley’s head (sounds fair).

Elias the started to play a song – but Lio Rush and Lashley interrupted so Lahsley could show off his physique with an impromptu pose-down.

Lashley nailed some oiled-up poses, before Elias charged up for a brawl. Lashley escaped before Elias could nail him with the guitar, but Finn Balor – still lingering around ringside – shoved Lio Rush towards Elias for a guitar shot across the back. 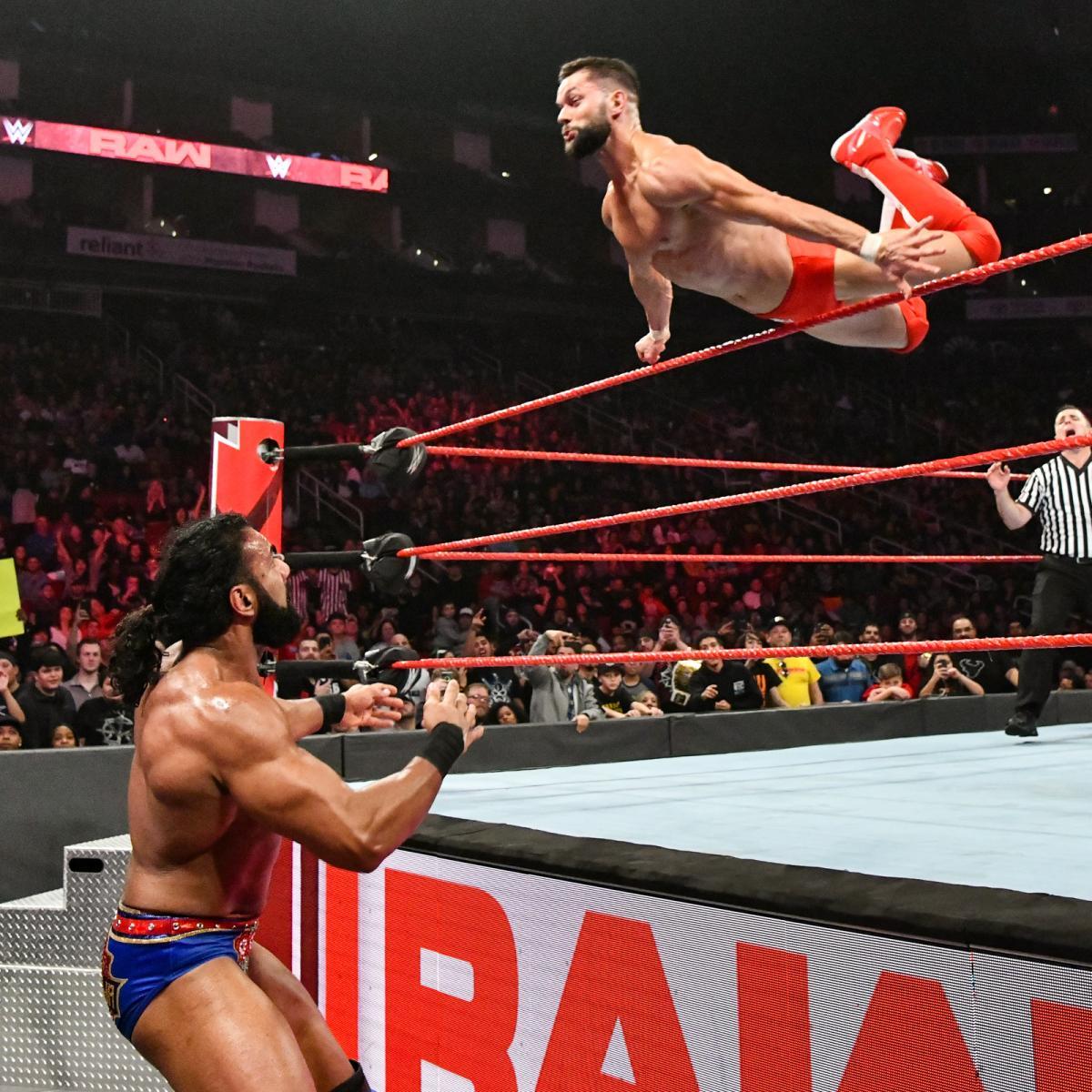 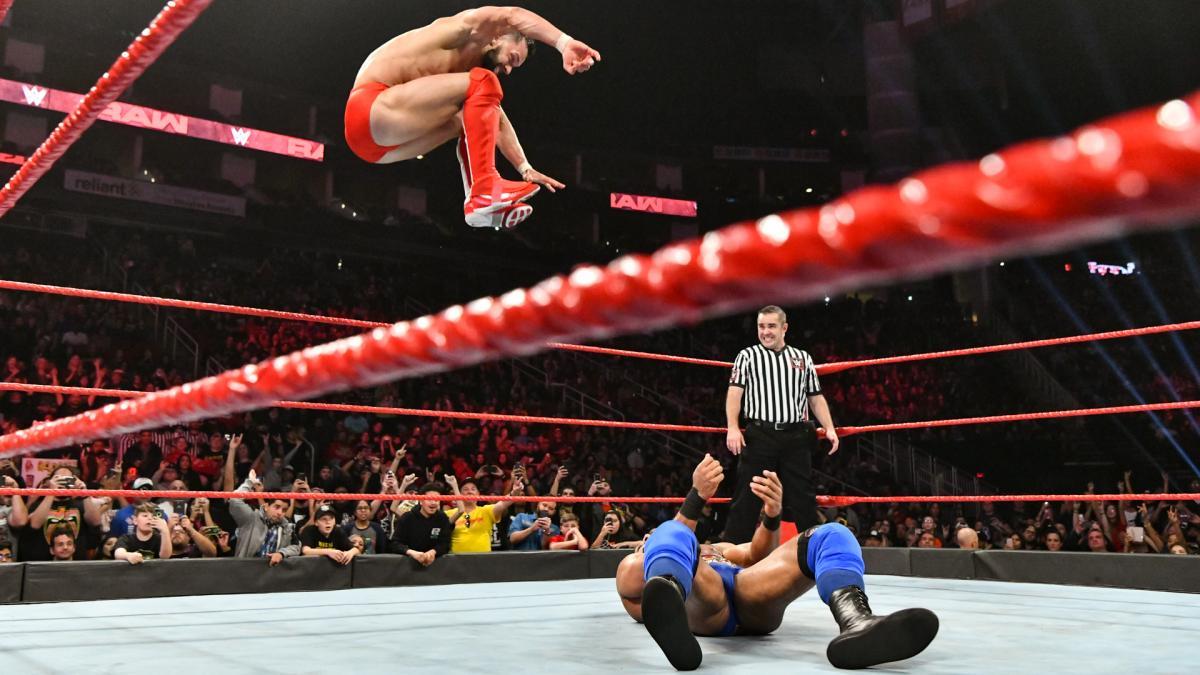 After helping Drew McIntyre lose and then getting Lio Rush smashed with a guitar, Balor defeated Jinder Mahal in singles competition.

There was some interference from the Singh brothers, but Apollo Crews ran out to fight them off and Balor hit the Coup de Grace on Jinder for the win.

It all seemed to be going so well for Balor, but McIntyre blindsided him backstage (Balor should have known better) for a savage beat-down.

This feud is either Balor’s ticket back to the main event or another inevitable loss to make another rising star – in this case Drew McIntyre – look good at Balor’s expense. 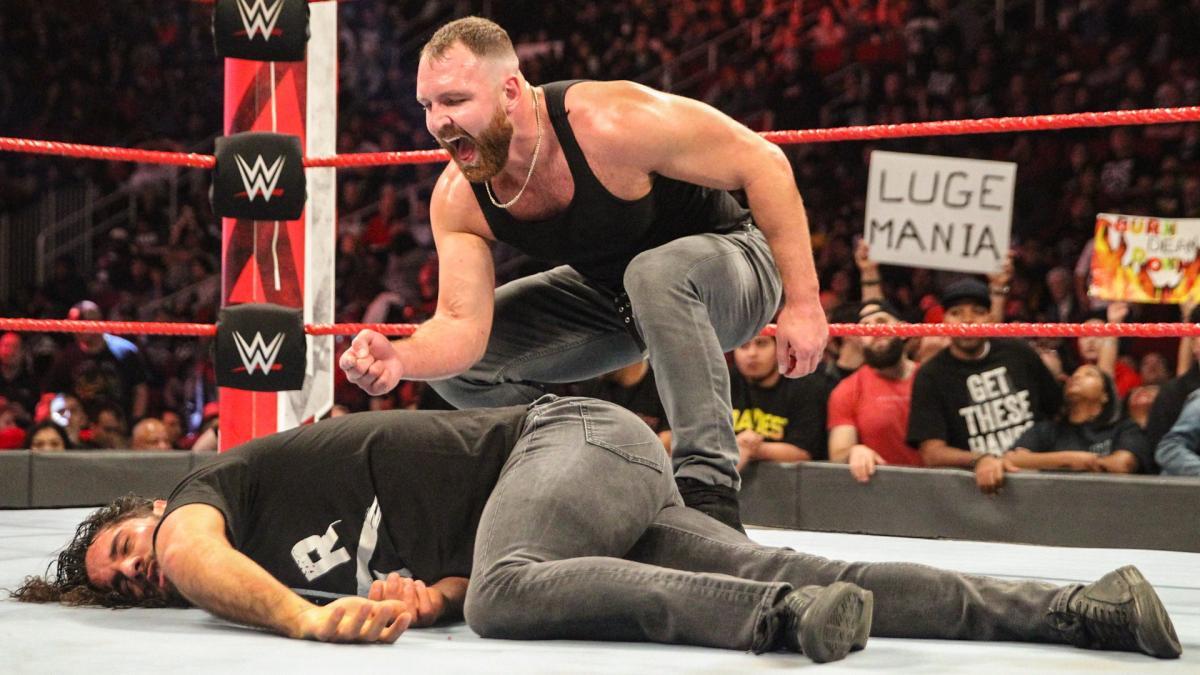 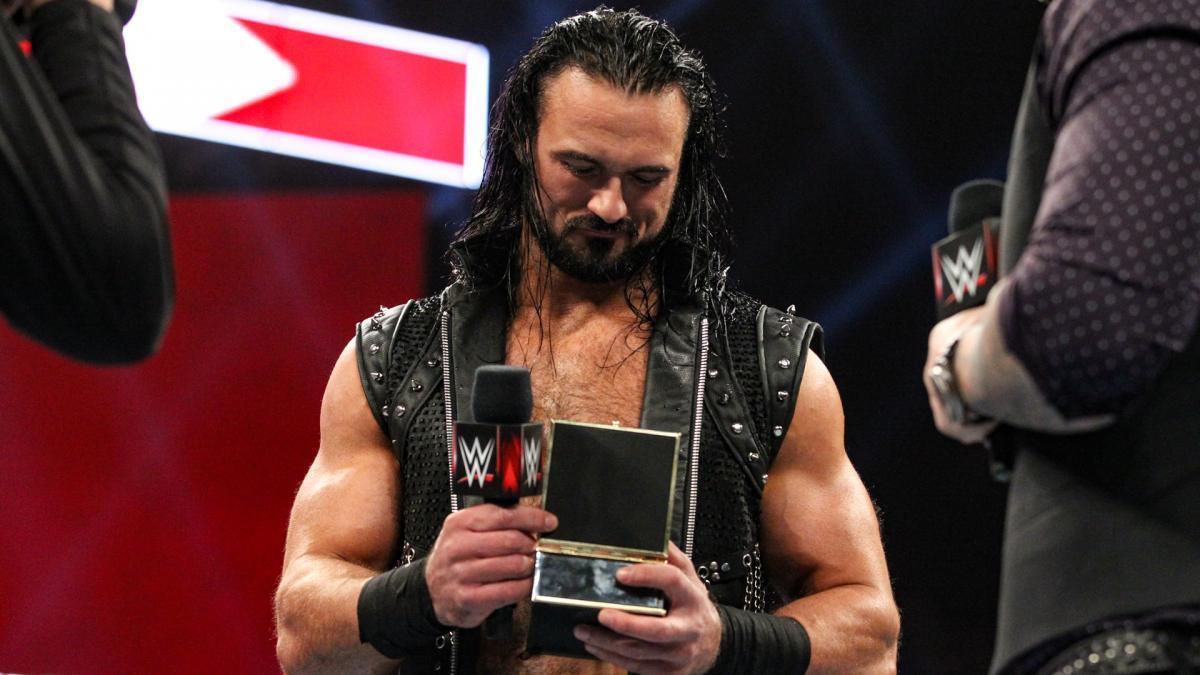 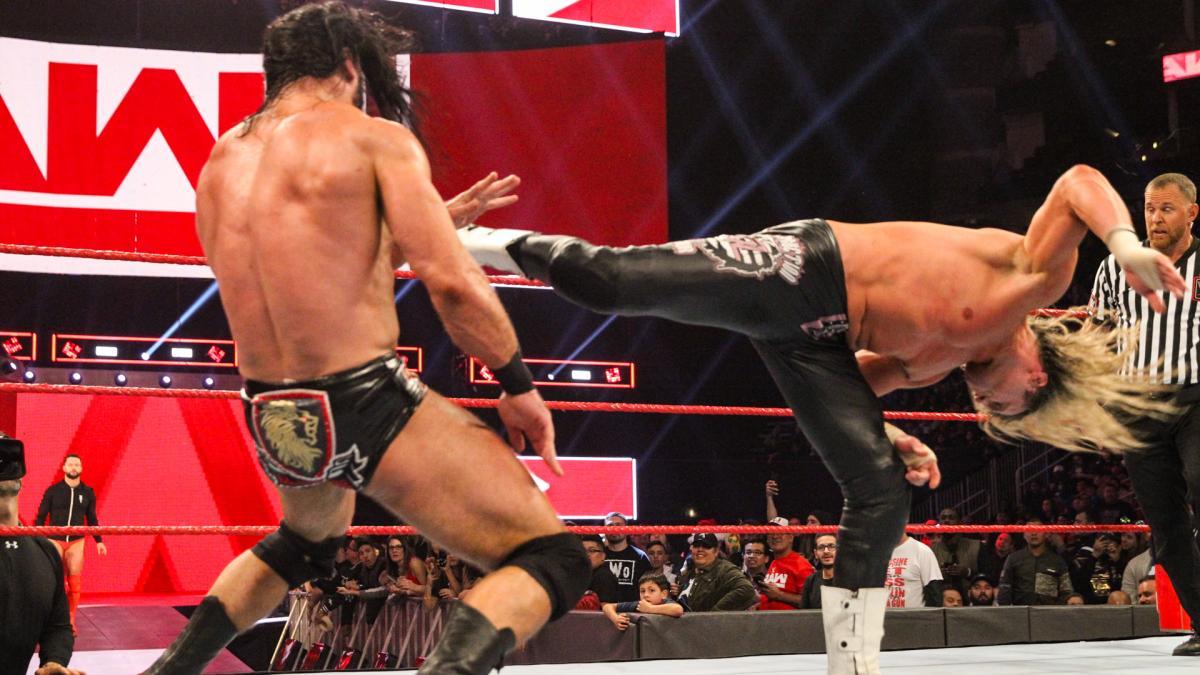 The Alexa Bliss “open forum” Q&amp;A with Banks and Bayley last week was so dreadful that WWE obviously decided to repeat the segment last night.

Although the line of questioning was once again inane (“What super power would you most want?”) Banks and Bayley did offer one interesting tidbit.

When asked what changes they’d bring to the women’s division in 2019, Bayley said they wanted to be the first ever WWE Women’s Tag Team Champions. (Correction: WWE had women’s tag champs from 1983 to 1989.)

WWE introducing new tag belts for the women has been rumoured for months, but WWE mentioning them on TV means it will almost certainly be happening in the new year.

With the state of the Raw men’s tag team division, WWE would be better off just transferring the existing tag title to the women rather than introducing yet another pair of belts to its already overcrowded hall of champions.

Banks and Bayley followed up with a win over Mickie James and Alicia Fox is tag team action. 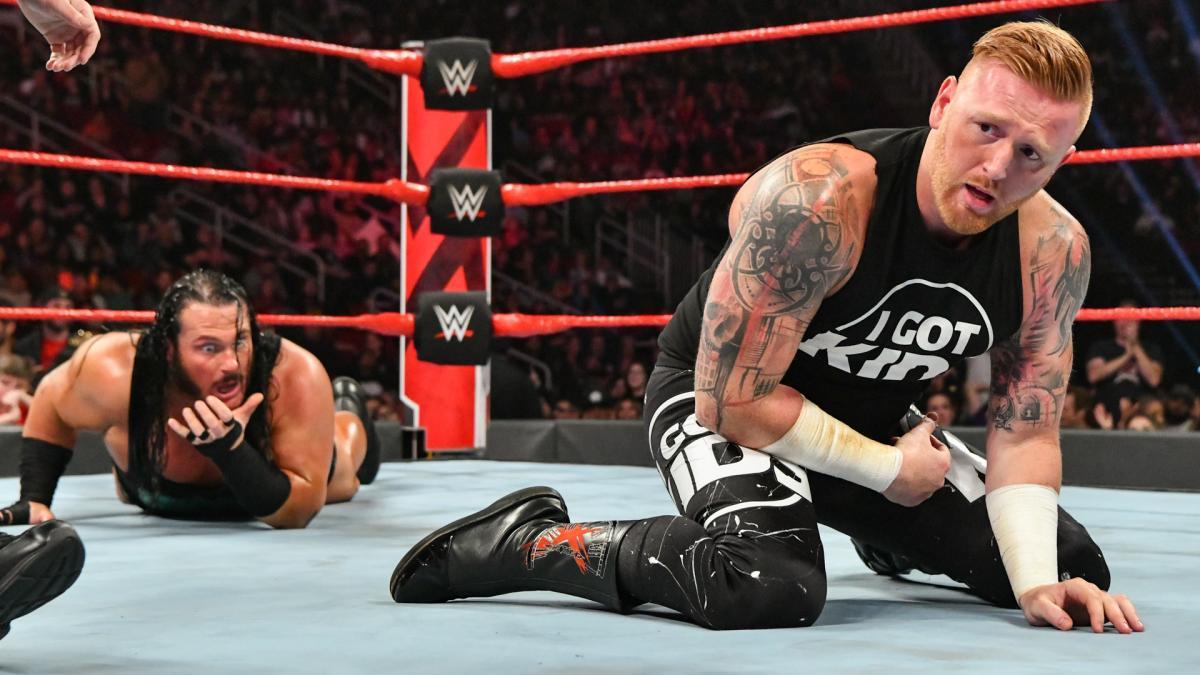 Rhyno has been fired and Heath Slater is now a referee

Tag partners Rhyno and Heath Slater faced off in a random high stakes match – whoever lost would be fired.

Backstage, Baron Corbin informed Heath Slater that although he has kept his job on Raw, he’ll now be working as a referee and handed Heath a black and white uniform.

This angle would have had more impact if fans hadn’t already forgotten that Rhyno and Heath Slater were even still working for WWE in the first place.