Britain’s Got Talent is drawing close to its end and tonight, ITV viewers were treated to another instalment of the hit show. As ever, hosts Ant and Dec were at the helm to run proceedings but the duo ended up in a joking clash when the latter decided to a face-mask related skit, which saw him disguise as his co-host. However, Ant shut him down, telling him: “Enough of this!”

Last weekend’s episode saw comedian Steve Royle voted through by the judges last week, with fans getting a say on who else will be joining him.

And tonight, there were another group of hopeful acts fighting it out for a place in the all-important final.

But the pair ended up rowing after returning from the first ad-break of the night when Dec decided to play a practical joke on his co-star.

“Welcome back to the second semi-final of Britain’s Got Talent,” Ant said – but he soon realised what Dec had done. 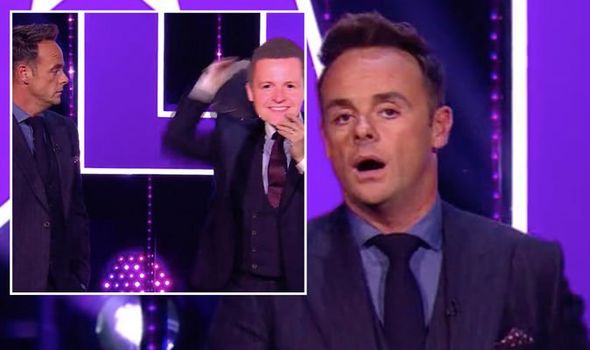 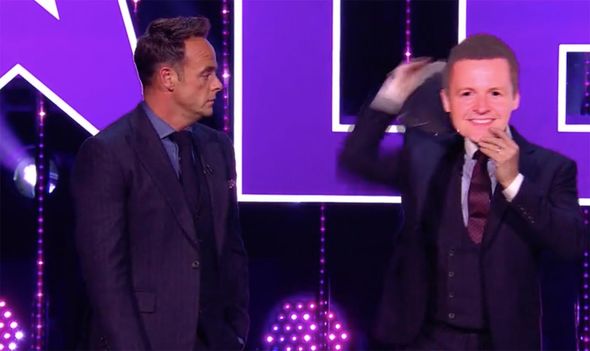 Dec was seen donning a mask with Ant’s face on the front, leading the latter to snap at his friend.

Ant told him: “Look, I’ve told you about this, it’s not the right kind of face mask! Take it off!”

Not able to resist a light-hearted dig, Dec replied: “And I’ve told you, it makes people keep their distance!”

The judges erupted into laughter at the host’s actions before Dec tried to move on – still wearing the mask. 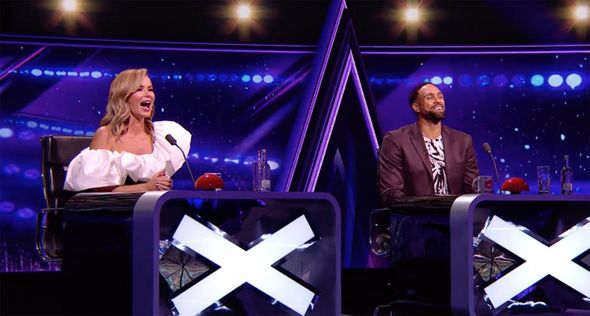 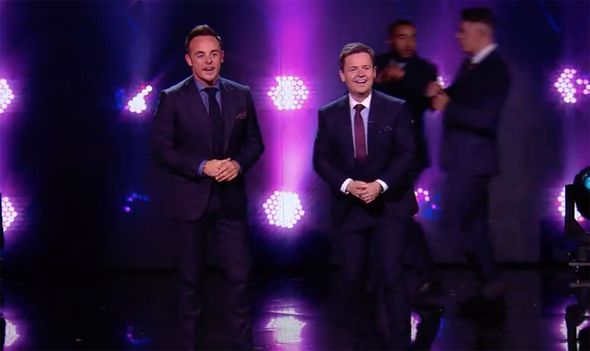 “Next up tonight is a magician who bamboozled the judges at his audition,” announced Dec.

However, Ant snapped at his colleague, demanding: “Enough of this, just take it off!”

But there was another surprise for Ant lying underneath as Dec went on to reveal a mask of his own face.

“It’s Damien O’Brien,” Dec told viewers, with Ant appearing to have walked off.

It came after the pair had made quite the introduction to the show earlier on.

“Do you know what I’m loving about this series?” Ant quizzed, with the pair both shouting “Ashley Banjo” in unison.

Ant said: “We’ve got quite a lot in common with him, you know? Think about it, he won the third series of Britain’s Got Talent.”

“And we hosted the third series of Britain’s Got Talent,” with Dec adding: “Such a lot in common!”

The hosts went on to remark how “tall” guest judge Ashley is, with Dec noting: “He’s the best dancer we’ve ever seen.”

“Well, third best,” smiled Ant, leading the presenters to apparently launch into a series of flips for an epic entrance.

Although it was clear it wasn’t the presenting duo behind the routine, they were seen out of breath after making out as if they had completed the spectacle.

Dec pretended to look confused when the real performers walked off into the background and made a knowing look at the cameras.

The latest edition sees another set of hopefuls fighting it out to go through to the next stage of the competition – but who will end up taking the title?

Britain’s Got Talent continues next Saturday at 8pm on ITV.