Good Morning Britain host Piers Morgan delivered a savage Brexit tirade in frustration at MPs for not pulling the UK out of the EU as scheduled. The UK will be forced to take part in European elections at the end of May if the Prime Minister cannot get a deal through the Commons. Speaking on GMB, Piers Morgan said: “It’s a new thing when you have three-quarters of Parliament who voted Remain actually openly in my view defying the will of the people.

“They try and ridicule that phrase, the will of the people, but that is what it was.

“When you call a referendum, Prime Minister David Cameron says, ‘once in a lifetime, we will honour what you decide’. And the country decides by a majority to leave, you have to damn well leave.

“The fact that we are still here three years later and they are still trying to stop it happening, and talking about second referendums and so on, I think is a complete disgrace.”

The presenter also claimed some Britons appeared to have “lost their minds” and now are not capable of having a general discussion on Brexit. 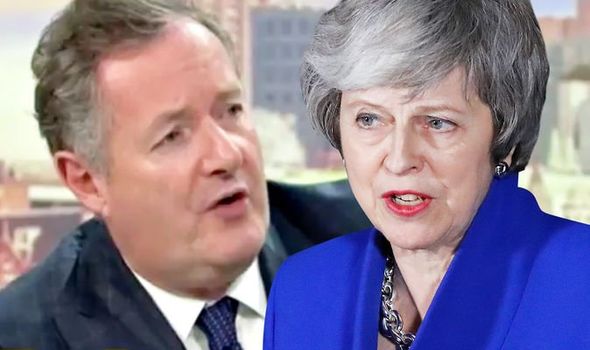 They try and ridicule that phrase, the will of the people, but that is what it was

He added: “It has had an extraordinary effect on British society where I have family members, friends and so on, where they work themselves into such a rage, it is like they have lost their minds.

“You cannot have a conversation, you can’t have a debate, there is no debate to be had, if you don’t agree with them, you are the enemy that has to be abused and shouted down.

“I find it really quite dangerous, and America has gone the same way over Trump.

“Three is no democratic conversation anymore, it is one or the other, it is tribal.”

The European Union agreed to extend Article 50 until the end of October after Mrs May asked the bloc for a delay.

The Government have been locked in negotiations with the Labour Party and on Monday, May’s de-facto deputy, David Lidington, said the meeting was “productive” and “positive”.

The cross-party talks are now expected to run into next week, according to The Times.

The Labour Party decided on Tuesday they will back the option of a public vote, or a second referendum, if it cannot win support for its own Brexit deal, secure changes to the government’s Brexit agreement or a national election.

After a meeting of the party’s National Executive Committee, the party source said the agreed position to take into elections to the European Parliament in May was “fully in line with Labour’s existing policy”.

Mrs May and Labour Party leader Jeremy Corbyn are expected to clash over Brexit in Prime Minster’s Questions on Wednesday afternoon.