Emmerdale revealed Jai Sharma (played by Chris Bisson) and Laurel Thomas (Charlotte Bellamy) would be at the centre of a difficult storyline in the weeks to come as they are told their unborn baby isn’t developing as expected and may have a chromosomal condition. After a CVS (chorionic villus sampling) test, it’s announced the baby will be born with Down’s Syndrome and despite Laurel’s reservations, Jai is very keen to keep the baby – but will they manage to agree on what to do?

The ITV soap announced the controversial plotline earlier this month which has attracted some negative reception from some viewers and beyond.

However, the show is keen to highlight the importance of the issue which thousands of expectant parents face and are continuing to go ahead with the storyline.

When Jai and Laurel are faced with the news they are expecting next week, they are initially thrilled to bits to have the chance to blend their families.

The couple – who are in their 40s – are shocked when they find out they are set to welcome a baby into their family. 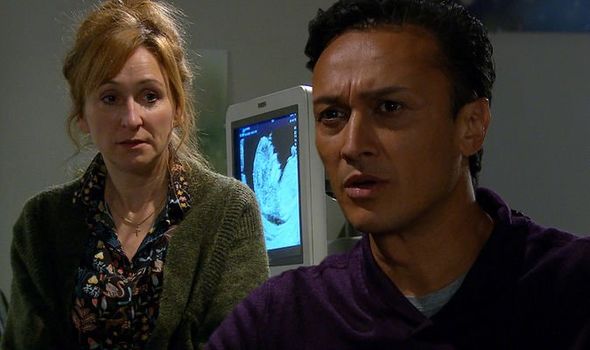 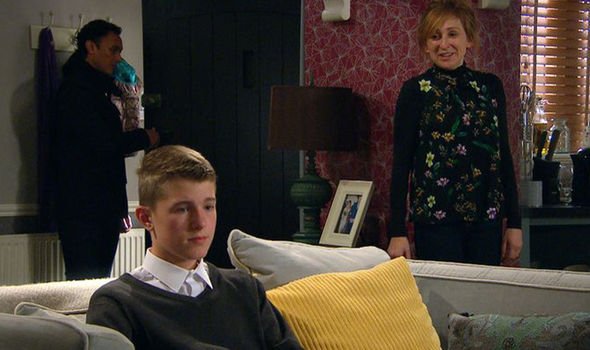 Speaking to Express.co.uk and other press in a recent Zoom call, Chris Bisson and Charlotte Bellamy opened up about what their characters will go through.

Talking of Jai’s feelings towards the pregnancy, Chris said: “I think Jai was struggling to contain his excitement!

“The way scripts have played, Jai’s had a long struggle and children that have or issues involving children have always been his Achilles heel and provided a lot of the drama whilst he’s been on the show.

“He’s always been desperate to be a father and to be a good father and that’s what drives him,” the star explained. 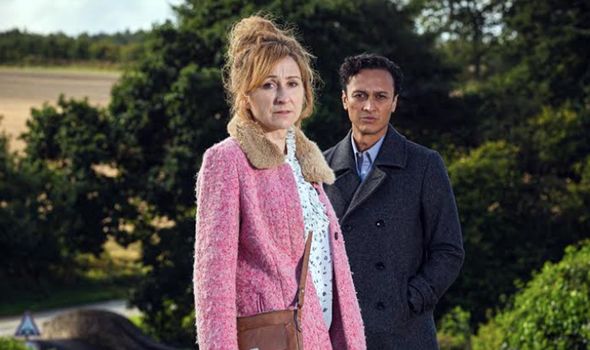 Laurel is left equally surprised to find out she is expecting due to her age and the pregnancy not being “planned”.

Actress Charlotte commented: “Well, I mean, Laurel obviously is sort of potentially menopausal, so she doesn’t quite realise – it wasn’t a planned pregnancy.

“So she just thought, ‘Oh, you know, my periods are all over the place like they can be,’ So it was a surprise.”

Charlotte echoed Chris’ comments: “But, once they kind of realise that this is happening… she’s aware of her age being 46. She’s aware of the risks, but they are delighted.”

However, the pair don’t stay in a state of bliss for long when they attend their 12-week scan in the coming episodes.

On returning home to the village, the drama will capture the couple wrestling with their emotions over what to do and Laurel has a CVS test to determine whether there are chromosomal or genetic disorders in a foetus – which it later confirms there are.

It’s Jai who is the one who ends up reluctant to terminate the pregnancy when discussions over the future begin.

Chris noted: “No, they’re different, Jai is to start with much keener to continue with the pregnancy, regardless of the diagnosis, although he’s very supportive of Laurel.

“And this is where the drama is, it’s about the people understanding each other, and their specific set of circumstances which lead them to make a decision.

But he explained to fans the pair would agree on how to proceed with the devastating dilemma in the weeks to come and decide to end the pregnancy.

“So yeah, they come at it from different ways, but end up in the same place,” Chris confirmed.

But it seems there will be some objection to come from those in the village, particularly from Rhona Goskirk (Zoe Henry) and Marlon Dingle (Mark Charnock) whose son Leo (Harvey Rogerson) lives with Down’s syndrome.