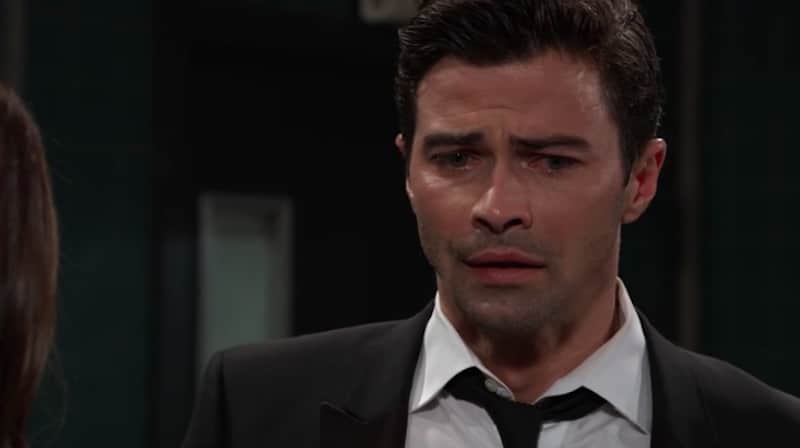 General Hospital fans can expect a turbulent and drama-filled week ahead after the murder of Kiki (Hayley Erin), and now the specter of Griffin Munro (Matt Cohen) leaving General Hospital!

The grieving and angry doc is being looked at as the main suspect in his main squeeze’s murder. We know he didn’t do it, but the police think differently. After all, he’s been a bit shady from the get-go. Is he still a priest, or not?!

Could this frame-up mean that Griffin is a short-timer in Port Charles? With his hospital job in a mess, and now his girlfriend gone, there’s really nothing keeping him in town.

Griffin is under arrest and cooling his heels at the PCPD. He could be looking at life in prison, which certainly doesn’t make for scintillating TV.

But what if he gets out on bail, and skips town? There really is no good reason for him to stick around. Since his arrest, he’s been getting nothing but grief from Kiki’s loved ones. Uncle Julian (William deVry) has already stormed the police department, threatening to beat Griffin to a pulp.

And although Griffin protests his innocence to the police chief, she believes he had a motive. Apparently Monica (Leslie Charleson) claims that Griffin had reason to hurt Ava (Maura West) through Kiki. Wow, who knew Monica was into throwing her employees under the bus like that?

Ava showed up to the PCPD on Monday’s show, threatening to kill Griffin. She believes he killed Kiki, and now she wants revenge. Will she get it?

The two bright spots in Griffin’s orbit are Anna (Finola Hughes) and Alexis (Nancy Lee Grahn). Anna believes he did not commit such a gruesome, heinous crime. And Alexis pops off to Jordan (Briana Nicole Henry) that Griffin isn’t the killing kind.

But are these two vocal ladies enough to keep Griffin out of jail and in Port Charles? There is no official word yet on whether Griffin is leaving GH or not, but tune in and find out!

General Hospital airs weekdays during the day on ABC.