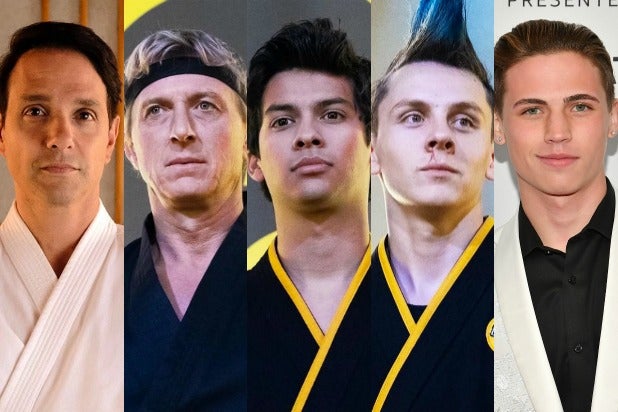 (This story originally published on April 24, 2019, and has been republished for the Aug. 28, 2020 transition of “Cobra Kai” Seasons 1 and 2 to Netflix. The series originally streamed on YouTube’s paid platform.)

Much like Daniel LaRusso in “The Karate Kid,” the teens in YouTube’s sequel series “Cobra Kai” got pretty damn good at karate pretty damn quickly. But just how much martial arts do the actors know in real-life? We asked five of the key kickers in the generation-spanning franchise that exact question.

Ralph Macchio as Daniel LaRusso
Macchio told us that his martial arts experience is more one as a servant to the martial arts. In other words, while he never entered karate’s formal belt system, he’s its greatest living ambassador (our declaration, not his).

“When we did this back in the day, we practiced it all day,” Macchio recalled. “It was a ballet. We barely touched each other.”

“I had a little bit of dance training as a kid, and these fight scenes are choreography, so I was decent at learning the choreography,” he told us. “And I had long, lanky limbs, so I had that sort of crane-pose kind of look … so I used that to my advantage.”

William Zabka as Johnny Lawrence
Zabka told us didn’t know any karate before the original “Karate Kid” movie. Pat Johnson, the trainer on the 1984 film, rectified that real quick.

Unlike Macchio, Zabka stuck with the martial art form and made it all the way to a second-degree green belt (about midway to black belt). Zabka’s training continued beyond the dojo, as Zabka ended up getting typecast a bit into other karate films.

Zabka revealed he kept training and sparring on-and-off between then and now, though his renewed interest in karate actually extends beyond “Cobra Kai”; much like his on-screen son Robby, Zabka’s real-life kids are into martial arts.

Jacob Bertrand as Eli aka Hawk
Bertrand has more experience (per annum on Earth, at least) than his older costars. Having started karate at eight years old, Bertrand advanced to purple belt before moving on to other interests. That doesn’t mean he gave up combat sports — he switched up to grappling training, which he did for two years. And then he discovered skateboarding.

Fortunately, “Cobra Kai” producers brought him back to martial arts. Two months before filming, producers set the kids up with private karate lessons.

“We learned so much,” he said. “We did so much training for the show.”

These days Bertrand is mostly maintaining his stretch game, though he wants to put on a bunch of muscle for a potential third season.

Tanner Buchanan as Robby Keene
Before “Cobra Kai,” Buchanan learned taekwondo “just as it seems most kids around the age of 10-12 do,” he told TheWrap. Not us, bro.

“I got a couple belts away from black and then quit because I was too busy,” Buchanan said. “Then, before I booked ‘Cobra Kai’ I had been training Muay Thai for around eight months in Toronto, Canada while I was filming ‘Designated Survivor.’”

As most teens do.

Xolo Maridueña as Miguel Diaz
Though Maridueña is the star of the show and the reigning All-Valley Karate Champion, he has pretty much the least karate experience of any of them.

“To be quite honest, I had minimal experience when it came to karate,” he admitted. “I had taken a year or so of karate when I was very young. I never really got into it until booking the first season of ‘Cobra Kai.’”

“Now that we’ve filmed almost two seasons, I have more karate experience, but the majority of what we practice is stunts and boxing,” he said. “I can say confidently that I am more comfortable doing those than traditional karate.”