Kyle got real on Thanksgiving. She thanked her former co-star Teddi Mellencamp for saving Thanksgiving and admitted that she was too sick to cook.

“Thank you [Teddi Mellencamp] for dropping off a Thanksgiving meal for my family (at 7 am today) knowing I am not feeling well [and] unable to cook. Thankful for you my friend (my family is too)” Kyle said on an Instagram story documented by Reality Blurb.

“While this is a very different Thanksgiving than we are used to, I am nonetheless so grateful for my family, friends, dogs, work… I will not allow 2020 to stop me from reflecting on all of the things that I am so thankful for,” she wrote.

“I hope all of you are staying health [and] safe and have a beautiful day,” Kyle concluded.

She also confessed that this Thanksgiving has been different for her and her family. While she is likely referring to coronavirus mandates, it’s clear that Teddi’s contributions aren’t a typical part of her Thanksgiving tradition. 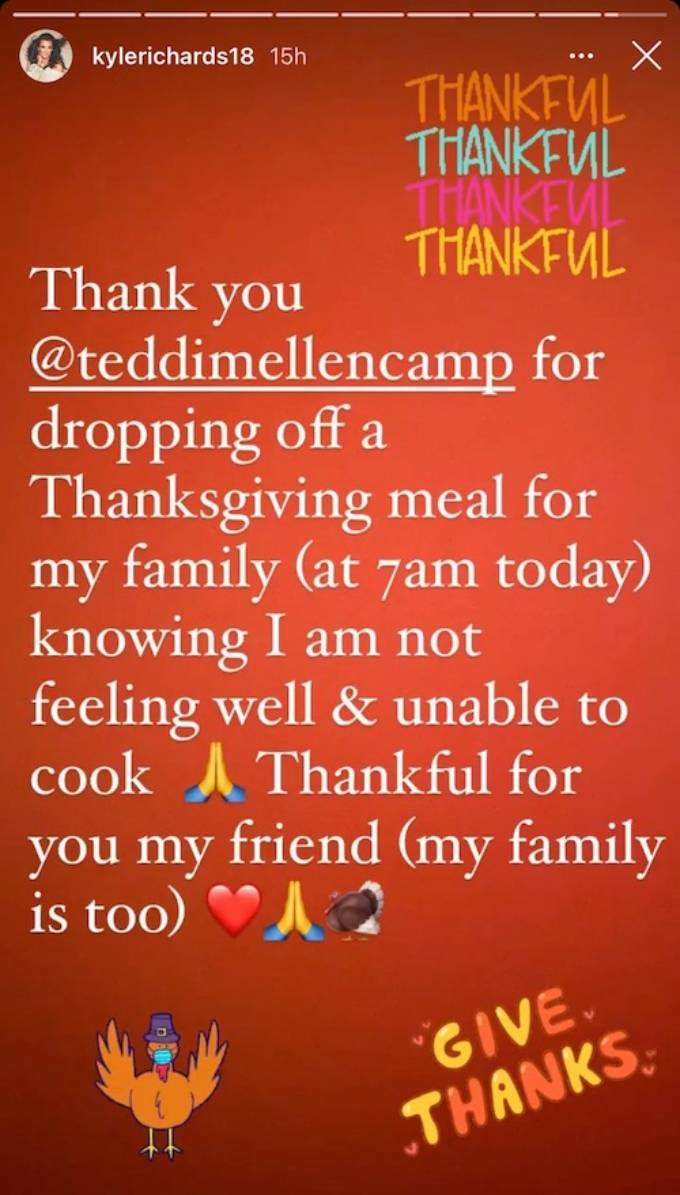 RHOBH shuts down the day before Thanksgiving

A source confirmed to HollywoodLife that production for RHOBH has been put on pause.

“RHOBH was shut down due to COVID. Everyone thinks it’s a crew member that tested positive and the ladies and production were informed this morning,” the source revealed.

While it likely started out with a crew member, it’s highly likely that the virus spread before the diagnosis was revealed.

In the meantime, the cast and crew are following CDC guidelines.

“Everyone’s been told to quarantine for 14 days and haven’t been told much else right now,” the source added.

What to expect from Kyle for RHOBH Season 11

Kyle has allegedly already gotten into drama with her sister and new cast member Kathy. The two have bold personalities and their need to be in charge is causing a “clash of egos.”

Apparently, the sibling rivalry is very intense and has already caused drama for the season.

Additionally, Kyle had drama with Garcelle last season. After she claimed that Garcelle stiffed her charity $5,000, it seemed that their friendship was beyond repair.

However, the two have since been spotted filming together in a friendly manner.

The Real Housewives of Beverly Hills is currently on hiatus at Bravo.