“It’s really a story about a person healing herself,” Feig told TheWrap 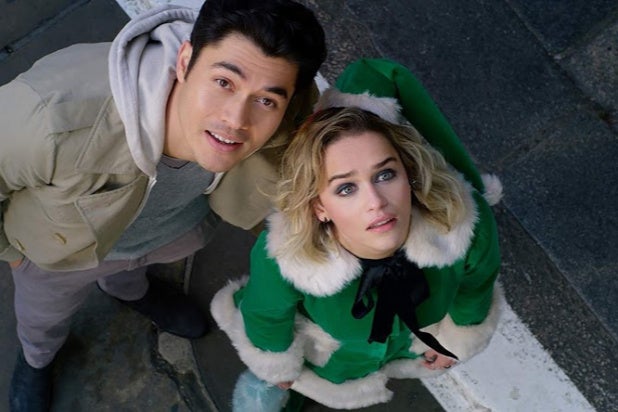 (This interview contains some major spoilers for “Last Christmas,” so if you haven’t seen the film and want to go in blind, you might not want to read this.)

It’s been a long time since any Christmas movie has caused the sort of uproar that “Last Christmas” was received with when it hit theaters back in November. But it’s also pretty unusual for any Christmas movie to sort of rock the boat the way that Paul Feig’s film did.

The issue at hand, I think, is that “Last Christmas” was marketed as what appeared to be a pretty standard romantic comedy with Emilia Clarke and Henry Golding. But in the end it really defied that label, and went off in a direction that caught pretty much everyone off guard with a huge twist in the third act that recontextualizes everything that came before.

Just the fact that there is a twist at all is the real surprise, and the actual nature of the twist I would say is secondary. The true shock here is that the film is not what you expected when you started watching it. But maybe we should have expected this, given that Feig certainly does not have a history that implies he’d churn out a regular studio romantic comedy.

As you likely know if you’re reading this, “Last Christmas” tells the story of a young woman, Kate (Emilia Clarke) who works at a year-round Christmas store and is just a real mess of a person. One day she meets a handsome and charming man named Tom (Henry Golding), and they banter and bond and form what appears to be the makings of the standard central relationship of a standard romantic comedy.

But, of course, all is not as it seems. Throughout the film we get references to the fact that Kate had been deathly ill the year before, and has not felt “normal” sense. And it turns out that Tom is dead, and Kate has his heart — literally. Tom had been hit by a truck, and, in a nod to the George Michael song from which the movie got its title, became the heart donor that Kate needed to survive. So Tom is functioning, essentially, as a Christmas spirit in this story.

“Last Christmas” split critics squarely down the middle, earning a 46% score from Rotten Tomatoes, meaning 46% of critics on listed on that site thought it was a good movie. The film is now out on home video, available from digital retailers and on Blu-ray and DVD.

I spoke with Feig about, well, all of this — the twist itself, the reaction to it, and what kind of movie “Last Christmas” actually is. And Feig said that “Last Christmas” might have done better with critics had they had a chance to view it a second time, after coming to grips with what sort of film it really was.

“This was probably one of my most divisive movies as far as reviews go,” he said. That’s certainly true, as “Last Christmas” was the first film he directed that didn’t earn an overall “fresh” rating on Rotten Tomatoes (60% or higher) since 2006’s “Unaccompanied Minors.”

But he wasn’t surprised that people were, well, surprised by how the film went.

“I knew we were, Emma [Thompson] and I both knew we were doing something that was going to surprise people,” Feig said. Thompson co-wrote the film with Bryony Kimmings and Greg Wise, in addition to appearing in it as Kate’s mother.

“In a perfect world, just like with restaurant reviewing, movie reviewers would see a movie at least twice, just so they can get past that first volley of, ‘I expected this. I thought it was going to be this, and it’s not what I thought. I’m knocked sideways. I don’t like this movie.’ I mean, I’ve had this so many times in my career where people don’t respond the first time or whatever and then they’ll kind of go like, ‘Yeah, you know, I ran across that on cable and watched it again and, actually, uh, I really like it,’ You know, because now they know it exists.”

I can personally attest to the validity of this line of thought. In my job here at TheWrap I often have to react to things quickly after only experiencing them once, and my thoughts very often change after a second viewing of a film or TV episode. This is also why I actually like being spoiled, to some extent — it makes it much easier to digest a film on only a single viewing, because it prevents me from getting hung up on things I didn’t expect.

In the case of “Last Christmas,” the hangups I think revolve around the fact that it looks like a fairly standard romantic comedy but is actually not one. In a way it’s like a Christmas-themed episode of “Modern Love,” the Amazon anthology series that has far more than just romantic love on its mind.

So I couldn’t help but bring up the topic of genre to Feig. I wanted to know how he would classify “Last Christmas.”

“I weirdly would call it a romantic comedy, but I guess I don’t define romantic comedy the way that it has been kind of hard drilled into our heads,” he told me. “I would call it a comedic romance but, you know, it’s so much more than that. I mean, it’s really a story about a person healing herself. And what the story drives home is that she really does heal herself, whether you realize it’s happening or not, and you don’t know until the end.

“We just really loved the idea that we end the movie with a woman in a much better place on her own. That just was really important to us. If you look at all my movies, they’ve really shied away from kind of being, ‘And you find your perfect match and then off you go into the sunset.’”

Feig cited “Bridesmaids” as an example. In that film, Annie (Kristen Wiig) ends up with a dude, but he notes that her getting the guy is just an “extra prize at the end” because the story is really just about Annie reconciling with her friends. “If they drove away, and the next day they broke up, you would still go like, ‘Oh, but I’m really happy that she’s friends with her pals again.’”

With “Last Christmas,” Feig admitted that before it was released he had to come to grips with the fact that there would always be a certain percentage of the audience who just would not accept the twist.

“Whenever I do my movies, you know, I do tons of test screenings on them as we’re putting them together and switching stuff out and figuring out if we want to shoot anything new and all that stuff. And you get this score at the end of each test screening and it’s based on the number of people that check excellent and very good as what they think the movie is,”  Feig told me. “Our last probably three test screenings that we did over the course of a month, we kept getting an 81, which normally my movies are in the nineties.

“And so, finally, we did the last screening where we had put some new stuff in and all that and it just played through the roof, and I was like, ‘Holy s—, like we probably got 100. And it was an 81 again. And I was just like, ‘What’s going on?’ And somebody at the studio goes, ‘Look, what it is is there’s just going to be 19% of people in the world who want the couple to be together at the end.’”

It’s worth point out as we get to the end here that Feig himself was not at all put off by the twist when he first read Emma Thompson’s screenplay. In fact, he had the opposite reaction.

“When Emma sent me the script, she didn’t tell me anything about it,” he said. “She literally said, ‘Here’s a script. I wrote it. I think we’d have a lot of fun doing it. Give it a read.’ So I had a clean read and I was really enjoying it the whole way through and, when I hit the twist, I was just like, ‘Ooh.’ I was so thrown in a great way that I was just like–I couldn’t kind of recover from it.”

Feig said he knew in that moment that he had to make the film. Yes, he decided to make “Last Christmas” specifically because of the twist. After all the to-do about the direction the story took, that revelation itself feels like a twist.