Amber, who was initally coupled up with Michael, returned to the Love Island villa last night to dicsover he had moved on from her to new girl Joanna.

Rounding on the fireman in defense of her best friend, Anna fumes: “Don’t make excuses for your actions.

“If the reason why you left Amber was all these things you say, then you should have left her before the new girl came in.”

Trying not to bite back, Michael replies: “Do you know what, I am done with this conversation, you’re an absolute child.”

As he walks away Anna snaps “fake,” causing Michael to explode.

“Fake? Fake? [You’re] pathetic, I actually thought better of you, you know,” he shouts across the garden table.

But despite him shaking with rage, Anna isn’t done with the buff lad yet. 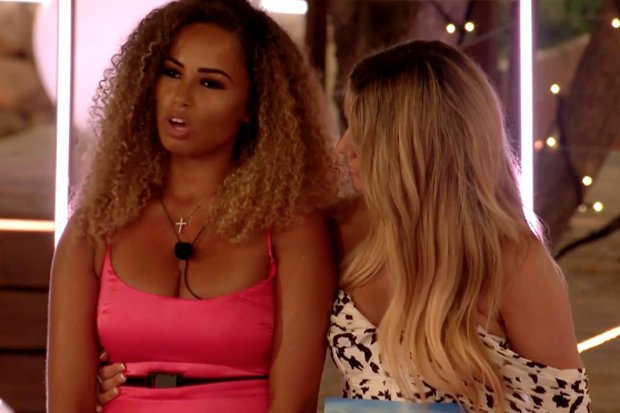 The buxom babe moans: “Calm down, you’re spilling your drink

Interupting, Michael snapped back: “And for four weeks she has made me out to be a d***head.”

Finially having her say, Amber joined in: “I have made nobody out to look like a d***head.

“Just to set things straight here, I opened up to that guy and now he is saying I made him look like a d***head.”

Also in tonight’s show Amy dumps Curtis after he admits he told Jourdan he wanted to couple up with her but she rejected him.

Breaking down in the villa’s beach hut, the blonde babe sobed: “I thought I had met my first love but it turns out I hadn’t.

“I am someones backup plan again.”