Piers Morgan, 55, was on hand to host Good Morning Britain alongside co-star Susanna Reid, 49, but the pair were also joined by Laura, 38, and news anchor Charlotte Hawkins, 45, in the studio. In a discussion about the number of storms which have occurred this year, the weather presenter explained meteorologists are going to start naming them in correlation with the Greek alphabet. However, as she tried to speak to ITV viewers about the developments, the outspoken journalist jumped in as he thought he knew more about the subject than his colleague did.

Starting her forecast, Laura said: “Before we get to the weather in the UK, I just have an incredible satellite image of across the Atlantic.”

Displaying a meteorological picture of the world from space from Monday, the presenter continued: “There were five named storms.

“This is only the second time this has ever happened – the first time it’s happened in nearly 50 years,” before delving into each one a little further.

Referring to the problem with the names of the storms, the forecaster added: “There is one letter left and when we run out of that, we go to the Greek alphabet and that has only happened twice in recorded history.”

Before Laura could carry on, however, Piers interjected from his desk as he asked the weather presenter whether she actually knew the Greek alphabet. 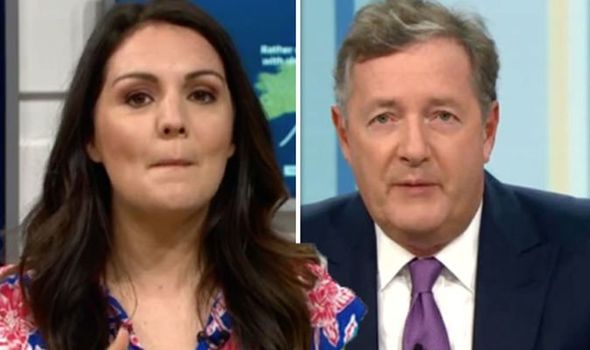 The forecaster only managed to give four letters before the host told her she was wrong and reeled off the list himself.

Piers seemed quite impressed with himself as he showed off his intelligence to which Susanna remarked: “It was just a chance for him to show off.”

“I’m just saying, I asked brains could she do the Greek alphabet – she failed and so I just did it for you,” he hit back.

Trying to outsmart him, Laura asked her co-star whether he knew the first 20 elements of the periodic table.

“I do, but I don’t want to show you up again,” Piers replied to which the weather presenter chimed: “We’ll do that another day.”