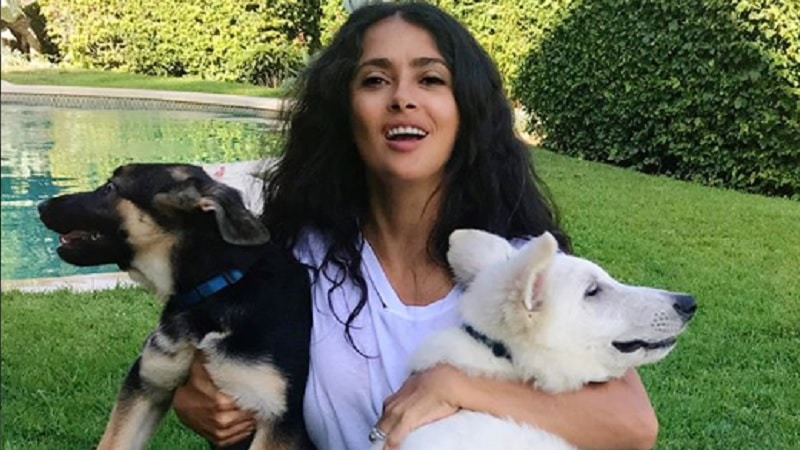 Actress Salma Hayek has maintained one of the best figures in the film industry on both sides of the Mexico-US border for better than two decades.  At 52 years old, Salma isn’t showing any signs of giving up her top spot either.

While many performers that have her level of fame work with professional trainers and follow strict diets, Salma has a special secret to maintaining her million-dollar figure.

Her secret isn’t what you think

There is no trendy new workout program or way of manifesting fitness through positive thought that she employs, instead, she credits her dogs for her figure.

As many of her fans know, Salma has somewhere in the range of 20 dogs at various times, as well as parrots, cats, horses, alpacas, and pretty much any creature that needs a home and has ended up finding one on her ranch/animal sanctuary.

Her white Labrador and French Bulldog are the two canine trainers she most credits with keeping her moving and fit, but all her animals get a turn giving her a workout.

She can’t say no to an animal in need

A few years ago, Hayek told Graham Norton about the time she told her husband she had an affair to help soften the blow of admitting that she adopted another puppy after promising that she wouldn’t bring any more animals home.

As might be expected, when she told her husband about how she hoped she could forgive her for her moment of weakness and loneliness, he immediately knew she had adopted another puppy.

Hayek is currently working on the feature, Limited Partners, which is slated for a 2019 release. Off the set, she is continuing to care for her menagerie of pets and prepare for her role in The Hitman’s Wife’s Bodyguard which is currently in pre-production.