In a corridor on the Magill campus of the University of South Australia, which is doubling as a private secondary school, Asher Keddie faces off against Luca Sardelis, a woman literally young enough to be her daughter. And it's not pretty.

Sardelis plays Zoe, a teenager whose image has ended up on a vile website called Our Local Sluts because someone has lifted a frame from a video chat between her and a male classmate – a chat during which each of them masturbated.

The classmate is Andy (Alex Cusack), the son of Keddie's Simone, and Zoe suspects he recorded the chat, then clipped a frame and uploaded it – all without her permission.

As it happens, she's right, but Simone doesn't know that. And so the accusations fly back and forth – of harassment, of reputations being tarnished, of the lasting damage this sordid saga could cause to Zoe and to Andy.

"You've got to stop going after him. This could have a terrible impact on his future," says Simone.

"Well it should – because this is who he is," says Zoe. "Your son is an entitled, misogynistic, cruel, fake-headed…"

"My son is thoughtful! It may not appear like that on the surface, but he is." 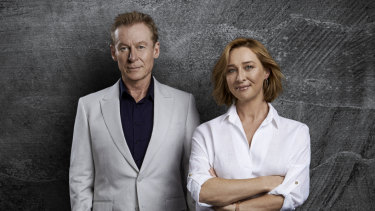 Richard Roxburgh and Asher Keddie play the parents of a teenage boy accused of uploading pornographic images of a classmate to a website without her knowledge or permission.Credit:SBS

This is the brutal domain of The Hunting, arguably the most of-the-moment piece of drama any Australian broadcaster has ever produced – which is just as was intended.

"Somebody at SBS came to us and said, 'Do you have an idea for a show that will spark a conversation?'" says Sophie Hyde, who co-created the series with Matthew Cormack and directs the last of its four episodes (Anna Kokkinos is in charge of the other three).

At the time, she says, "there were a lot of different stories about kids sharing explicit photos online. Some of them were really gross. And some of them had comments that were really appalling. And I just felt, like, 'What is happening? Why would these young men, in particular, be sharing explicit images of people who were really close to them?' You know, that kid in maths class, or the kid on the bus with them. Why did they want those images, and then to be speaking about them in such a horrific way?"

So Hyde – who won a best director award at Sundance in 2014 for her debut feature 52 Tuesdays – and her colleagues in the Adelaide-based collective Closer used a real case as the springboard for a drama in which the ripples from a sexting scandal touch on the parents, the teachers – played by Jessica de Gouw and Sam Reid – and the friends of the key players as well those responsible for creating and disseminating the images in the first place.

There are in fact two cases running simultaneously through The Hunting, at two schools. Andy, however, is the point at which they intersect.

As the mother of two young boys, Keddie says she feels "I am bringing as much of my maternal side to this as I possibly can". Her Simone evolves over the course of the series from a woman who believes implicitly that her son is incapable of doing something so vile to one who is forced to acknowledge that he in fact is – and that she and her husband Nick, played by Richard Roxburgh, are partly responsible for that.

Only when she begins to grasp the truth, and the role her husband plays in covering up for her son, do the blinkers begin to lift from her eyes.

"I find it so interesting, all the things that we're covering: privacy, trust, not just the misogyny and the toxic masculinity," she says of the series. "There are really subtle but important things that are being touched on in this show, and I'm just really drawn to talking about them." 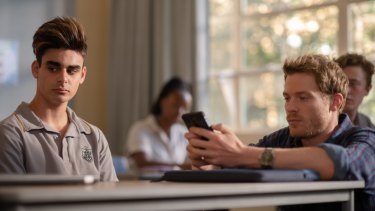 Yazeed Daher as Nassim and Sam Reid as his teacher, Ray.Credit:SBS

One of those things is the complicity of Simone, and the impact, both positive and negative, that has had on her life, and her son's.

"She's a woman who hasn't realised she hasn't had a voice," says Keddie. "She's just been living in her own bubble, and she's felt very protected."

Her husband calls the shots, and she's been OK with that. "It's not OK with her, though, when she realises that she's also raising a misogynist. He’s swearing at her, he's yelling at her, he's completely disrespecting her, his mother. And of course, that's where it starts, this kind of behaviour, and then it exacerbates. And she recognises that she is enabling that as well. And so she starts to find her voice in the marriage, too."

Clearly, The Hunting speaks to the broader #MeToo moment as well as the peculiar dynamics of coming-of-age in the era of social media, selfies and sexting. But, insists Roxburgh, it never stoops to preaching. 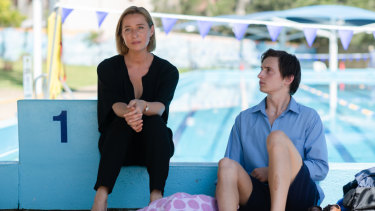 Simone (Asher Keddie) is torn between protecting her son Andy (Alex Cusack) and making him take responsibility for his actions and attitudes.Credit:SBS

"Done the wrong way, it could have been a sort of social-essay echo-chamber piece, which would have been really annoying," he says. "But it's really not that. It's very measured.

"The characters all have a kind of – not likability, that's a really s— word – but you can see into them, into their reasons for doing stuff, and it makes sense. And I really like that. You can see why my character does something that is essentially morally reprehensible in covering up his son's tracks. He does it because he loves his son and he wants to protect his son."

That refusal to land on easy moral judgements is at the heart of The Hunting. Essentially, the show takes the position that the issues it addresses are not best dealt with by "just saying no" or by rigid policing, but by something far more nuanced.

"It doesn't come down on the side of, 'Well, the only solution is just don't do it, just don't send the photo in the first place'," says Roxburgh. "There's a gentler entry into that material, which is, 'They're kids, it's the way they're doing it now. And we have to keep up'."

For Hyde, the most common response to the scenarios posed in The Hunting is to condemn anyone who takes a nude selfie or shares it. But that, she argues, is "unreasonable". 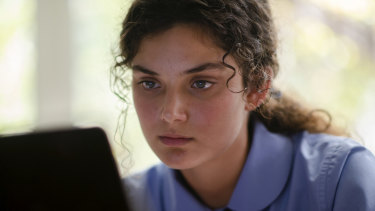 Luca Sardelis as Zoe, the girl at the centre of one of two sexting scandals in The Hunting.Credit:SBS

"The truth is, everyone is doing this," she says. "If, as you're growing up, sharing images is a way of exploring everything in your life, of course that's going to be the way you explore sex and intimacy as well. It's not the consensual sharing that we're saying is problematic, but the non-consensual sharing."

These are big topics, and The Hunting addresses them with a deft touch, while acknowledging that no one has the stock answers ready to hand – not the teachers, not the parents, and certainly not the kids themselves. But, it suggests hopefully, we can get there – though it won't be easy. 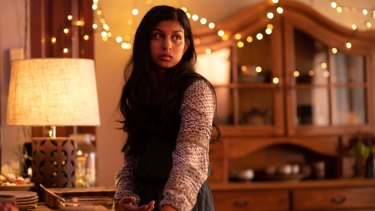 Kavitha Ananasivam as Amandip, who lives in fear of what her traditionalist parents will do if they find out she has shared a nude photo of herself.Credit:SBS

Adding to the complexity is that too often the debate around these matters is framed as a technological or legal one rather than a moral one.

"I don't think we really need to be talking about the specifics of that technology," she says. "The idea that the online version of you is different from the real-world version shouldn't exist anymore.

"We should be talking about how we treat each other across the board."