The Coming Back Out Ball Movie
★★★★
MA, 86 minutes, select release

Nance Peck proves to be a particularly hard sell when she and other "elders of the LGBTI+ community" are invited to the Coming Back Out Ball at Melbourne Town Hall. 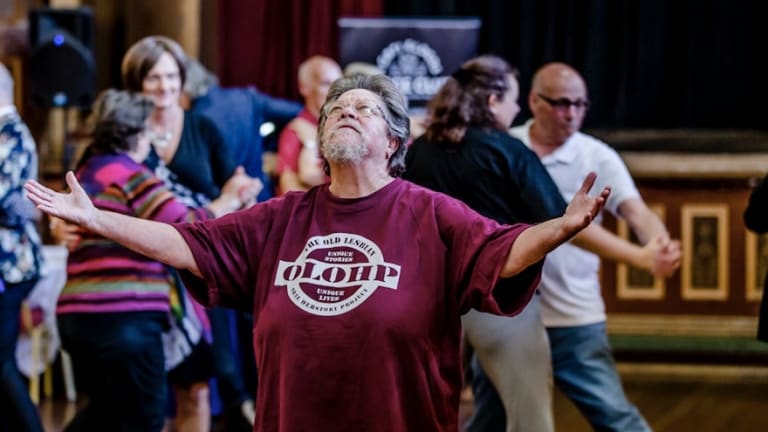 Ardy Tibby has no intention of lapsing into anonymity.

She's a longstanding Pink Floyd fan and a program featuring Robyn Archer, Carlotta and Deborah Cheetham singing show tunes and pop standards doesn't suit her taste. If organiser Tristan Meecham,were to include some heavy metal, it would be a different story.

Ardy Tibby's reservations about the ball are more down to earth. She's wondering if its guests of honour, many in their 70s and 80s, are going to be up for such a late night on the dance floor. But in this case, Meecham does have an answer. He's set up a weekly LGBTI+ elders' dance club at the town hall and its members are soon proving Tibby has no need to worry.

Meecham had the idea for the ball after learning that age and infirmity had caused some elderly people who had come out in their younger days to slip "back into the closet". Faced with having to find a place in a nursing home, they have just neglected to address the question of their sexual identity. So the ball is to be both affirmation and celebration of what Tibby calls "the alphabet community" because so many letters are needed to describe the group's diverse nature.

She, herself, has no intention of lapsing into anonymity. To accessorise a T-shirt proclaiming "This is What an Old Lesbian Looks Like", she's grown a moustache and beard.

Sue Thomson's documentary feature looks in on preparations for the ball, climaxing with the big night itself, but woven into her account are the life stories of many of the guests. Some are old campaigners who weathered the crucial protests of the 1970s. Others came out more recently after marrying and having children.

Eighty-seven year-old David Morris, a model train enthusiast, was happily married for years even though he knew he was gay. He came out only after his wife's death and now puts on a neat leather suit every week to go to his favourite gay club's "leather night". "My performance, as you'd imagine, is down somewhat," he says, "but it's not gone."

Judith Slade, a former shearer, didn't come out until her 60s and is now in a wheelchair but that doesn't stop her getting to the ball. It's the aftermath, however, that pleases her most. Meecham arranges for her to visit a property and shear one more sheep, which she does, finishing the job in less than 10 minutes. "I feel alive," she says as she puts down the clippers.

The ball itself is a triumph, capped by the result of the same-sex marriage vote two days later, and this funny, joyous and very human film stands as a rousing tribute to the difference it should make to so many lives.