Dermot O’Leary caused The One Show to momentarily pause when he walked off while being interviewed by hosts Alex Jones and Ronan Keating. The hosts interviewed Dermot and Susan Calman via video link while Michael McIntyre joined the presenters in the BBC studio. However, the conversation was forced to come to a halt when Michael noticed Dermot had rushed off to get his cat.

Ronan asked: “Now, Dermot now many people know this about you but you started your career as a stand up, is that right?”

“Well I mean let’s be very clear about this. I started my career as a warm-up which is a very charitable definition of stand-up,” Dermot replied.

“I’m not holding a candle to Michael and Susan. But yes I warmed-up for Mel and Sue I was one of the researchers on Light Lunch.

“One day the bosses came in and said, ‘We’ve just sacked the warm-up guy, will you go on?’” 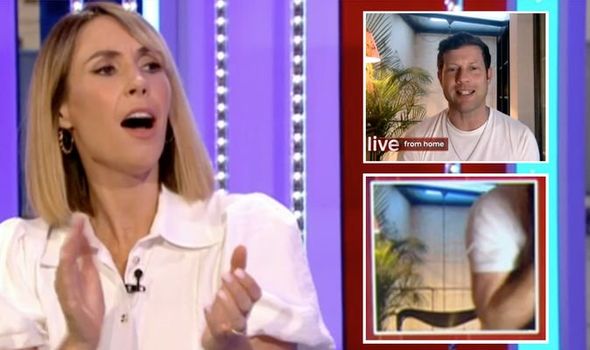 “I did that and Andi Peters came along as one of the guests and he saw me do warm-up and said, ‘Do you want to screen test for some jobs,’ and I ended up getting T4 off the back of it,” he added.

“It’s the way a lot of presenters and comedians started,” Alex remarked.

“And Susan, haven’t you compèred one of Michael’s shows?”

“Yes I did,” she confirmed. “He was at the Stand Comedy Club in Glasgow.”

Interrupting herself, she said: “I have to apologise, that’s my cat.”

“I remember you Susan because you had a cat on your shoulder then,” Michael joked. “You’re the Scottish girl with a cat on her shoulder.”

“It’s little Pickle,” Susan explained. “She’s 17 so she’s quite an old lady and she’s decided she wants to be on The One Show as well.”

“I was trying to find my cat,” Dermot explained before Michael quipped: “I don’t know what happened.”

Continuing, Susan said: “I compèred a show you did at the Stand Comedy Club in Glasgow. I think you were warming up for a tour.

“And you were a mystery guest and when I announced you the audience went crazy because you’d come.”

“The stand is fantastic,” Michael said. “We’ve got to get back into these clubs soon.”

Dermot then stood up and walked off camera before returning with his feline friend Toto.

Noticing the new arrival, Alex said: “Dermot’s brought Toto the cat. There he is.”

“We’re going to talk all about Toto later on,” Alex added.

The One Show airs weekdays on BBC One at 7pm.