Orson Welles pulled out all the stops in this one-of-a-kind 1958 film noir, with Charlton Heston as the straight-arrow Mexican hero and Welles himself as a corrupt, morbidly obese cop patrolling the US border. A great film – moody, comic, violent, perversely romantic, and from shot to shot, always dazzling. Digitally projected. Astor, Sunday, April 14, 4pm. 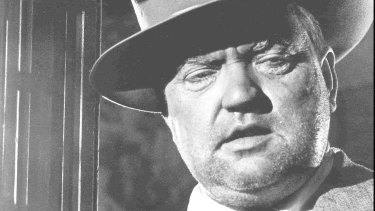 Orson Welles as Hank Quinlan in his 1958 film A Touch of Evil.Credit:OCTOBER FILMS

Made in the wake of the smash hit Easy Rider, Dennis Hopper's trippy 1971 second feature as writer-director-star remains one of the most radical films backed by a major Hollywood studio. Hopper stars as a stuntman working on a western shot in Peru, the collapse of which becomes a symbol for the broader failures of American foreign policy. New restoration, digitally projected. ACMI, Saturday, April 13, 6.15pm.

German director Christian Petzold (Barbara) returns with another economically told tale of masquerade under life-or-death circumstances, this one centred on a German refugee (Franz Rogowski) on the run. Literally, it's a story that belongs both to today and yesterday, set in a version of mid-20th-century Europe that looks uncannily like the present. ACMI, Saturday, April 13, and Sunday, April 14 (check online for session times).

Beck Cole's 2011 first feature follows a young Indigenous woman (Shai Pittman) recently released from prison and battling to rebuild her life, including her difficult relationship with her mother (Marcia Langton). Carrying an emotional impact that belies its seeming modesty, this is one of the more underrated Australian films of recent years. Digitally projected. ACMI, Sunday, April 14, 1pm.

For the past decade, the Artist Film Workshop – a collective that encourages hands-on experimentation with Super-8 and 16mm film, as opposed to video – has been a key force in Melbourne film culture. This valuable survey program, including some new films, offers a chance for newcomers to get a sense of what they've been up to. All work screened on 16mm, with introductions by the filmmakers. ACMI, Sunday, April 14, 4pm.