[Editor’s Note: The following review contains spoilers for “We Are Who We Are” Episode 8, “Right Here, Right Now 8, and Last.”]

The old saying goes, “a promise made is a promise kept.” But for Fraser (Jack Dylan Grazer) and Caitlin (Jordan Kristine Seamón), two teenagers living in defiance to the status quo, their promise is made stronger by not being kept. Early in the series, when the two burgeoning friends told each other they would never kiss, little did either know the kind of journey they’d go on together; that Caitlin would explore the world as Harper, that Fraser would become their righteous defender, or that they’d find such a powerful connection in each another.

But taken beyond the duo’s growing devotion, their promise was always antithetical to their outlook. Sure, it helped at the time; eliminating a prospective romantic component freed them from worrying about whether they were flirting or not, dating or not, attracted to each other or not, and their individual personalities were free to grow. Fraser supported Caitlin, Caitlin supported Fraser. Simple.

Still, Fraser and Caitlin, along with most of the teens in Luca Guadagnino’s beautiful identity drama “We Are Who We Are,” are kids who refuse to be boxed in by anything. Much of the finale is an hourlong reverie built around swooning music and delayed farewells, where Fraser and Caitlin embark on one last shared adventure before their parents pull them apart. They confess secrets, they fight, they run from each other (literally and a lot), until that same undeniable bond that united them in the first place sends them back into each other’s arms. The finale has all the trappings of a Hollywood ending, complete with a last-second sprint, so the guy can tell the girl how he really feels.

And then, they break their promise. They kiss. Take from the final scene what you will — Guadagnino’s series is nothing if not ambiguous — but Fraser and Caitlin’s tender moment doesn’t have to be romantic. Most likely, it’s not. The kiss feels like the only way to acknowledge how deeply they feel for each other, and that a parting handshake or hug wouldn’t be enough to commemorate their time together.

The story earns this interpretation by subverting so many assumptions along the way, which makes it an even better ending. How many stories of a young man and a young woman end in a big, sweeping, romantic kiss? In the history of film and television, how often is a prolonged make-out session the must-have magical ending audiences demand? Here, the same closing scene works against those neat-and-tidy endings. Instead of serving as the be-all, end-all answer — “Oh, they’re in love! Happy ending! Yay!” — it invites more questions. “So they are a couple?” “Should they be?” “Is that the right ending for this story?” 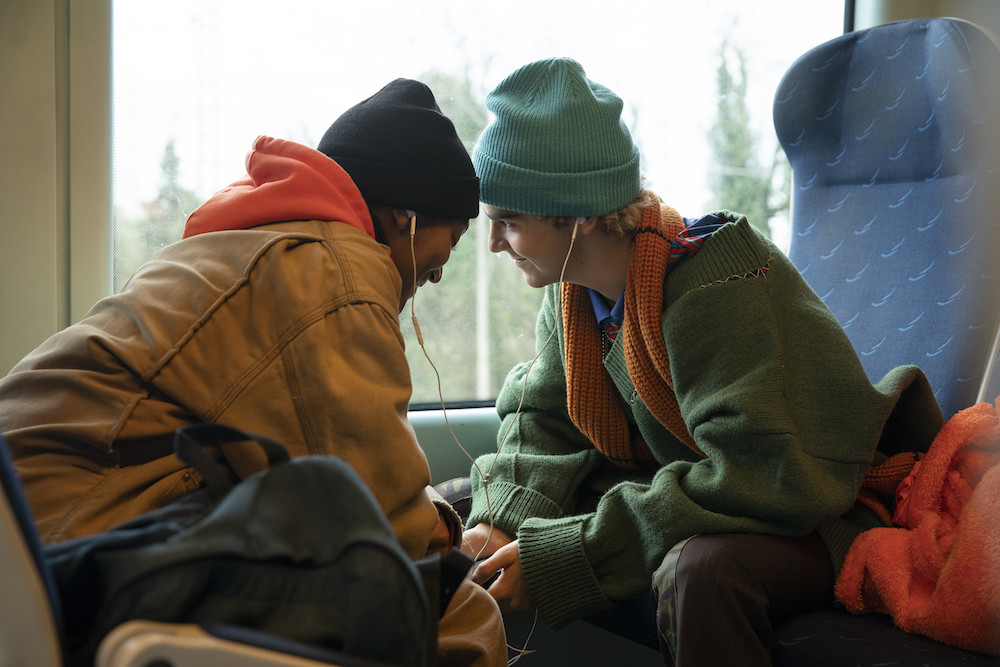 But the longer you sit with it, the clearer the message becomes: Fraser and Caitlin will not be dictated to; their actions aren’t determined by anyone else, and their choices are their own. They didn’t kiss for our benefit. They kissed for theirs. Whether you read the title as a defiant declaration (“We are who we are, damn it!”) or a shrugging catch-all (“We are who we are, I guess…”), it’s unapologetic and honest, open-minded and well-intentioned.

I keep going back to the conversation before the concert when Fraser tells Caitlin that Mark, his former crush from New York, wasn’t real. Fraser made him up. To Fraser, this is a huge revelation. He’s embarrassed, but he also doesn’t want Caitlin to think less of their friendship because he’d been lying to her for so long. And in another show, Caitlin flipping her shit about feeling betrayed and invalidated by Fraser’s emotional deceit would feel right at home.

Instead, she accepts it — and more.

“So fuck off!” Fraser joyfully howls, and they go dancing off into the night.

It’s an impossibly grand and intimate ending, one well-suited for the eight-episode story we just saw, though whether it’s the absolute ending of “We Are Who We Are” remains up in the air. Luca Guadagnino has said his writing team already wrote an outline for Season 2, and they’d very much like to continue these characters’ stories. Seamón said, if the show continues, she hopes they jump ahead to see Caitlin and Fraser in their 20s. I, for one, would love to see it. Coming-of-age stories so often take place during our so-called formative years, but the fluidity of Generation Z isn’t meant to end with high school. Identities shift and take shape over a lifetime. We are who we are, but that doesn’t mean it’s who we’ll always be.

Some promises really are made to be broken.

“We Are Who We Are” is streaming in full via HBO Max. A Season 2 has not yet been ordered by HBO.