TheWrap Emmy magazine: “The most compelling villains, they come from a real, heartfelt place of trauma and that’s what makes them so scary,” HBO star says

A version of this story about Tessa Thompson and “Westworld” first appeared in the Drama/Comedy/Actors issue of TheWrap’s Emmy magazine.

Charlotte Hale has been a staple character on “Westworld” since its beginning, but it wasn’t until this year’s third season that actress Tessa Thompson actually saw her character as a real part of Jonathan Nolan and Lisa Joy’s HBO sci-fi series. And that’s because for Season 3, Thompson was no longer playing the part of a human but a robot, a role most of her co-stars have been living in since the drama premiered.

“This season felt like for the first time I was really on ‘Westworld,’” she said. “It finally felt like I was inside the show in a game, which was a joy.”

The end of “Westworld” Season 2 revealed that Thompson’s Hale — the executive director of Delos, the company that runs the Westworld theme park — was not actually Hale anymore, but Dolores (a character played by star Evan Rachel Wood) in a Hale-shaped robot body that was created by Bernard (Jeffrey Wright) to help Dolores escape to the real world.

If all of this is hard to follow, you can only imagine how hard it must have been for Thompson to be playing a version of Wood’s Dolores who is pretending to be Hale to her friends, family and colleagues throughout Season 3. But actually, Thompson used that confusion to her advantage.

“I think the mechanism of that in the show does a funny thing,” she said. “Because, for me, while I’m playing a character that I’m familiar with–I know what Charlotte looks like, walks like, sounds like — there were so many things about Charlotte that I didn’t know until this season. Like, in all the previous iterations of her that I was playing, I didn’t know that she was a mother, I didn’t know that she was going through her marriage being dissolved. So, in a weird way I sort of was like Dolores in playing her this season. I was an interloper inside her life.”

Thompson also had the chance to do things a human character could never do and take on action sequences that had been reserved for Wood and other actors playing hosts in seasons past.

“I know that this host is capable of doing a perfect impersonation of Charlotte, but I was more intrigued by the moments when the presentation of Charlotte didn’t need to be perfect because she was alone,” she said. “Or for example, what people have called the Terminator sequence, where I’m getting to shoot people. I don’t have to seem human, which means that I can shoot them without even looking at them. And that’s really interesting, getting to play this complicated machine that doesn’t necessarily have to feel like a human.”

One of those action-packed scenes that Thompson shot was also the most heartbreaking for her character, as it saw the death of the real Hale’s son and ex-husband, whom Halores had come to love by this point in the season. The two were killed in a car explosion, which was ordered by Season 3’s villain Serac (played by Vincent Cassel). Halores survived the incident, but was left with burns all over her artificial skin, some of which she kept for a very good reason, according to Thompson.

“She wants to remember the destruction, in a way. She wants this physical reminder of essentially this event that sets her on a new course,” she said. “I don’t know the blueprints to that course yet, I don’t know it. I will say, selfishly, I really loved getting to find these vulnerable parts. But I think any good villain — if that’s what I’m primed to become next season, the super villain — I think any good villain has to have a really good reason for their villainy. And I think typically, for me, the most compelling villains they come from a real, heartfelt place of trauma and that’s what makes them so scary, is that they need their villainy so badly to live, really. Because they’ve been so torn down by the things that have been inflicted upon them. And I think that’s sort of fun. So if that’s what I’m doing next season, I’m game.”

Season 3 of “Westworld” ended with several cliffhangers, including a post-credits scene that seemingly sets up Halores to team up with Ed Harris’ William a.k.a. the Man in Black for Season 4 — or at least a version of him, seeing as Halores has a robot version of William kill the real William during those final moments. But even Thompson doesn’t know what will come of that just yet.

“I wish I knew anything. It’s so funny because I’m lucky enough in the last handful of years to align myself with projects that are incredibly secretive and fans are really excited to know what happens, whether it’s Marvel or with this show,” Thompson said. “But the truth is, I don’t really know anything, so I’m not really in danger of spoiling anything. I’m not sure, I definitely think that there’s an opportunity — as you said — for Ed and I to be teamed up inside of a mission. I think we’re seeing what happens with Maeve (Thandie Newton) and with Caleb (Aaron Paul), that they’ve sort of joined forces. And I think the essential question that is asked in all of those teams is, is mankind beyond saving? Is there something to save there or do we have to create a whole new breed of hosts and reprogram what it means to be human.”

Watch TheWrap’s full interview with Thompson via the video above.

To read more from the Drama/Comedy/Actors issue of TheWrap Emmy magazine, click here. 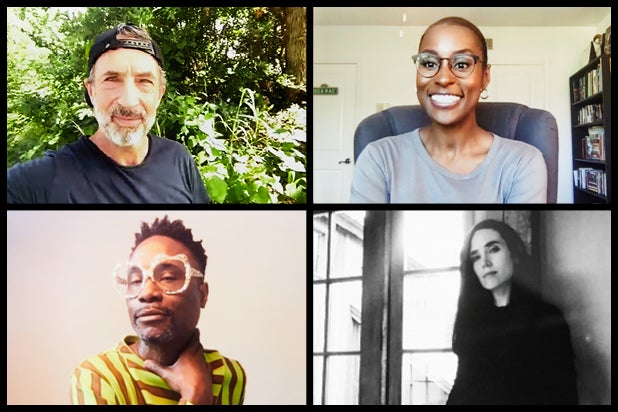