But, what are the best Fyre Festival memes and why did Andry King go viral? Here's the lowdown.

Why did Andy King go viral?

During the documentary, Andy King shares that the festival's organiser Billy McFarland asked him to perform sexual acts to make the Bahamian customs to let the drinking water through.

According to Andy, Billy said: "You’re our wonderful gay leader and we need you to go down [to customs]. Will you suck d**k to fix this water problem?"

The appalling story has gone viral and taken over the internet in the form of countless memes.

From asking for Andy's help in solving the US government shutdown to solving the contaminated water issue in Flint, Michigan, the memes have appointed Andy as a solution to countless problems.

But, Andry seems to be okay with them and see the funny side of all.

On January 29, Netflix US' official Twitter account shared a video alongside the tweet: "Andy King has seen all of your FYRE Fest memes – and he loves them!".

In the video, Andy said: "I'm blown away with the response of the documentary.

"Completely blown away. I'm now a noun, a verb, an adjective. It's mind-boggling.

"Someone reached out last weekend and said 'you're trending'. And I'm like I don't even know what trending means."

The viral star is now using the social media buzz around him to push his GoFundMe campaign so that he can use the money to repay the Bahamian workers that never got paid for their hard work.

What are the best Fyre Festival memes?

Some of the best memes, as seen above, are all focused on Andy's problem-solving abilities.

One Twitter user shared: "Job Interviewer: Explain a time where you encountered a problem and describe how you solved it." alongside a photo of Andy.

Another hilarious Tweeter has praised Andy for what a good friend he was, saying: "If you don't have friends in your circle like #AndyKing…. You don't have the right circle."

Another social media user, tweeted: "When you ask to leave work early on a Friday".

In the photo shared alongside the tweet, the subtitles read: "And I got to his office, fully prepared to suck his d***". 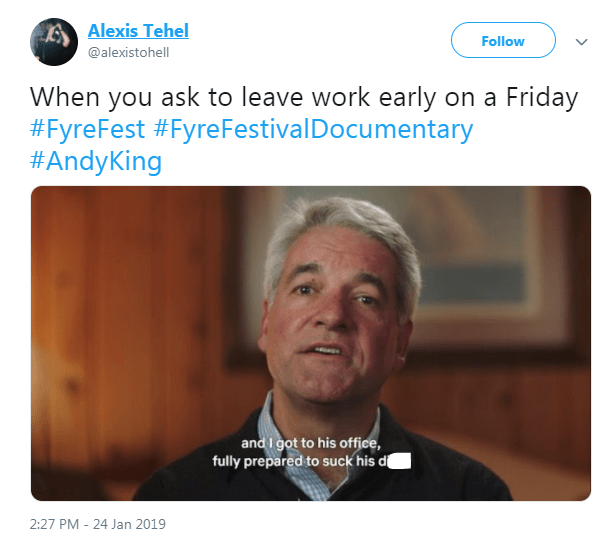