ANOTHER mystery blast in Iran: Explosion heard in Tehran with electricity cut in city suburb days after deadly factory blast, fire at nuke site and a gas leak at a medical clinic

An explosion has been heard in western Tehran as electricity cut out in a city suburb, in yet another blast to rock Iran in recent weeks.

The claim was made by state broadcaster IRIB and cited online reports, but senior officials were quick to deny rumours of the explosion.

The blast is the latest in a string of explosions to have swept across Iran over the past two weeks, amid suspicions that Iran may have been behind at least one of them.

IRIB said power was cut in the area of the city suburbs where the explosion happened.

is not yet known what caused the blast or if any casualties have been recorded. 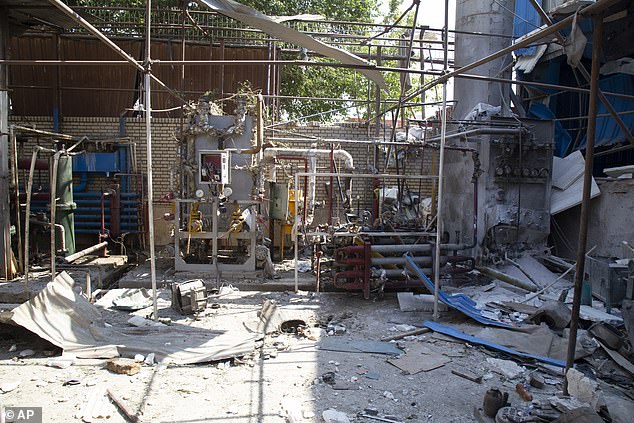 The governor of Qod city, Leila Vaseghi, was quoted by the semi-official Fars News agency as saying no explosion had occurred, but that there was a power outage that lasted about five minutes.

It was not immediately clear if the reported incident had taken place in Qod or in a different area of Western Tehran, and residents contacted by Reuters in other parts of the city said they had heard no explosion.

Iranian military expert Fabian Hinz told the New York Times: ‘There are two underground facilities, a site associated with chemical weapons research and an unidentified military production site,’ in the area where the blast reportedly happened.

The newspaper added the mayor of nearby town Garmdareh claims residents heard an explosion at a factory making gas cylinders.

But although though state media had already reported it, Hossein Haghverdi, the MP for the affected area, said there was no explosion and the power loss was caused been by an issue at a local power station.

There have been multiple explosions around Iranian military, nuclear and industrial facilities in the past two weeks.

In the early hours of Tuesday morning an explosion rocked the Sepahan Boresh factory in the city of Baqershahr, south of Tehran, according to state media.

It was caused by ‘workers being negligent whilst filling oxygen tanks’, the town’s governor Amin Babai was quoted as saying.

Three people were also injured in the blast, two of them suffering injuries so severe they required hospital treatment.

On July 2, the country’s atomic energy agency reported that an ‘accident’ had damaged warehouses under construction at the Natanz nuclear site, around 150 miles south of Tehran.

The organisation released a photo of a building apparently damaged by fire, with doors hanging off hinges after they appeared to have been blown outwards. 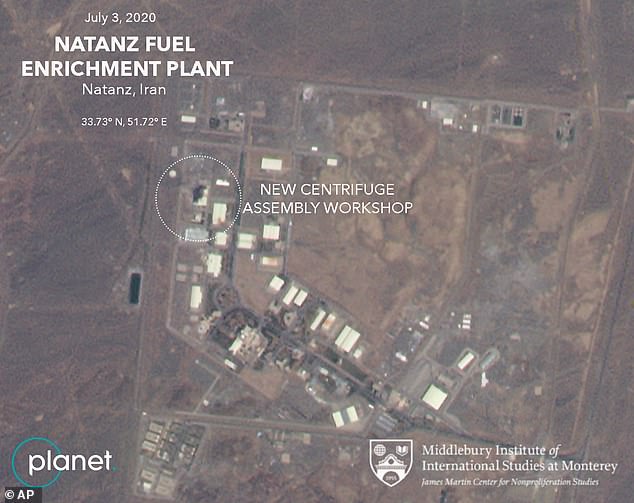 The Natanz nuclear facility was destroyed by a fire, with Israel suspected of being behind the cyber-attack

Last Friday, Iran’s Supreme National Security Council announced that the ’cause of the accident’ at Natanz had been ‘accurately determined’ and declined to give further details, citing security reasons.

But the lack of detail over the incident sparked speculation over the cause, with many Iranians suspecting covert Israeli operations were responsible.

Agency spokesman Kamalvandi acknowledged to the IRNA state news agency that the incident had caused ‘significant financial damage’, but did not elaborate further.

He said the damaged building had been designed to produce ‘advanced centrifuges’, hinting that their assembly had begun prior to the ‘accident’.

On the evening of July 2, IRNA published an editorial that warned Iran’s arch-foes against hostile action.

It said that unnamed Israeli social media accounts had claimed the Jewish state was behind the incident.

The editorial warned Israel and the US against any attack on Iran’s ‘security’ and ‘interests’. 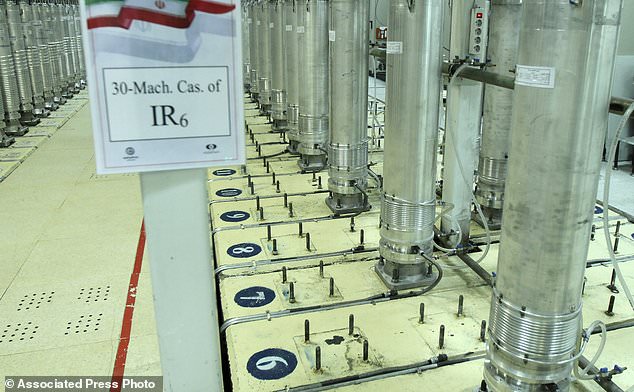 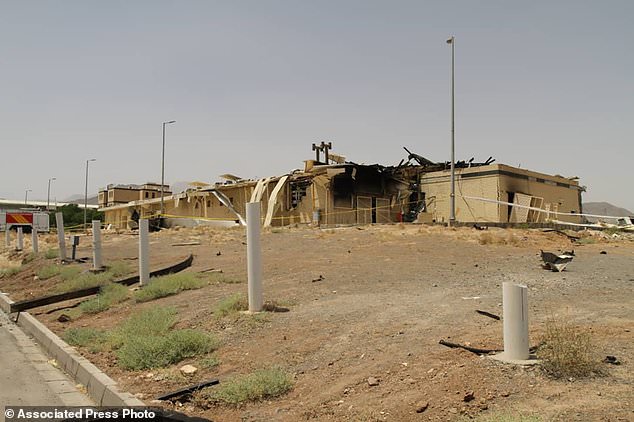 A Twitter account linked to an Israeli analyst had claimed in Arabic on July 1 that Israel had attacked an Iranian uranium enrichment plant.

The BBC’s Persian service, which Iranian authorities consider hostile, said it received a statement ‘hours before’ the incident from a group called the ‘Homeland Cheetahs’ who claimed responsibility.

They claimed to be ‘dissidents present in Iran’s security apparatus’ and said the location was targeted as it was not ‘underground’ and that therefore the alleged attack could not be denied.

Israel’s Defence Minister and Alternate Prime Minister Benny Gantz said: ‘Iran is aiming for nuclear [weapons], we can’t let it get there.

He however added that ‘not every event taking place in Iran is necessarily connected to us’.

On June 30, a powerful explosion hit the Sina At’har health centre in the upmarket northern Tehran neighbourhood of Tajrish, killing 19 people and damaging nearby buildings.

Authorities said it was caused by a fire that had set light to gas canisters in the clinic’s basement.

Tehran’s fire department spokesman Jalal Maleki told state TV that some victims ‘were in upper floors in operation rooms, who were either patients being operated on or those with them.

‘They unfortunately lost their lives due to the heat and thick smoke’.

That blast came just days after a gas tank explosion near a military complex east of the capital in Parchin on June 26, though there were no casualties in that incident.

Parchin is a site suspected of having hosted conventional explosion tests applicable to nuclear power, which the Islamic republic denies.

It had come under scrutiny from the UN’s International Atomic Energy Agency in 2015.

Iran had refused the IAEA access to the site because of the nature of its work, but the agency’s then chief, the late Yukiya Amano, paid a visit there.