At least one individual was seen inside the store, according to footage posted by the site LiveLeak. 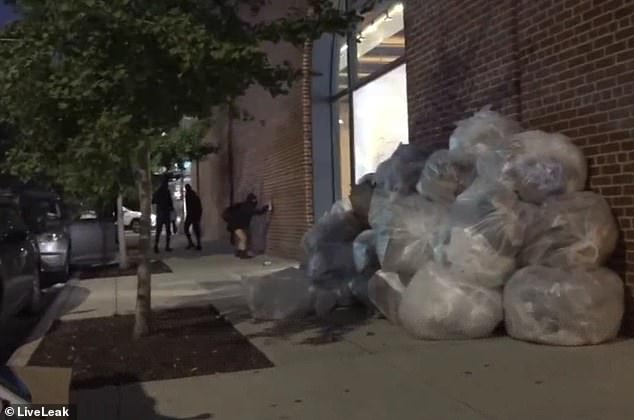 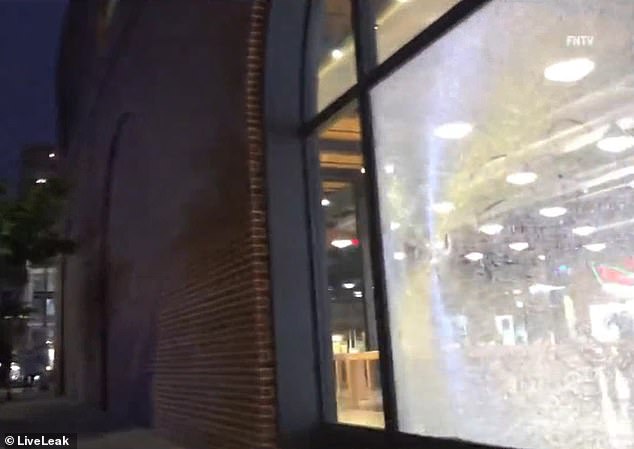 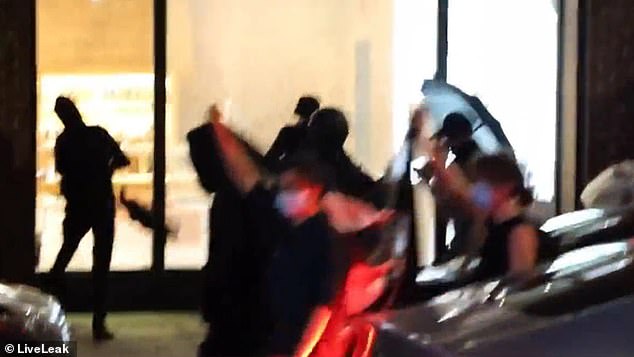 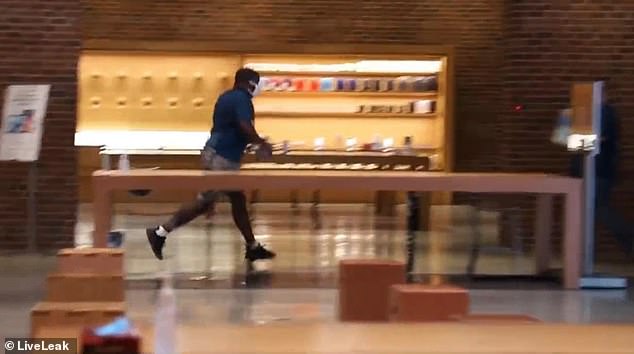 The video also shows graffiti spray painted onto the glass facade of an HSBC Bank location nearby on Bedford Avenue.

A Whole Foods store nearby that was vandalized was spray painted with the message ‘Murder Bezos’.

In one segment of the footage, a Whole Foods employee comes outside to confront some of the would-be vandals and protesters.

Whole Foods is a subsidiary of Amazon, the online retailer owned by the world’s richest man, Jeff Bezos. 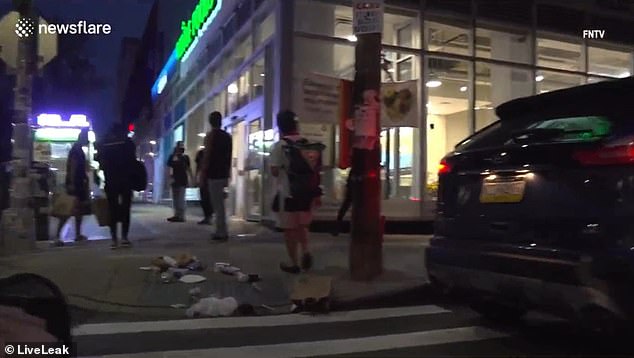 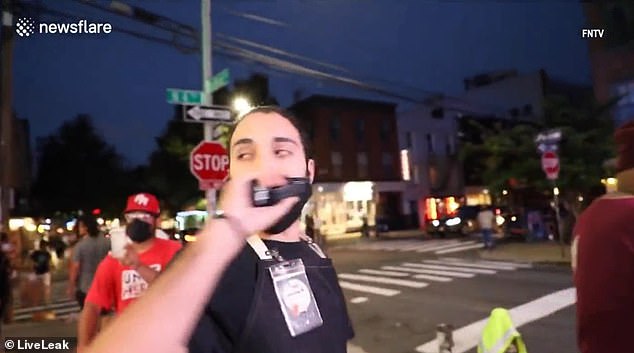 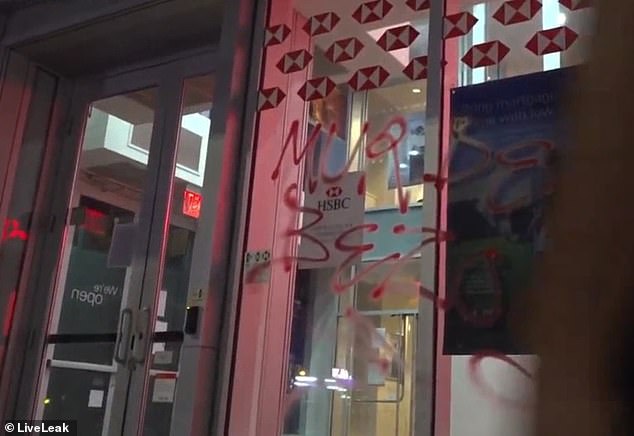 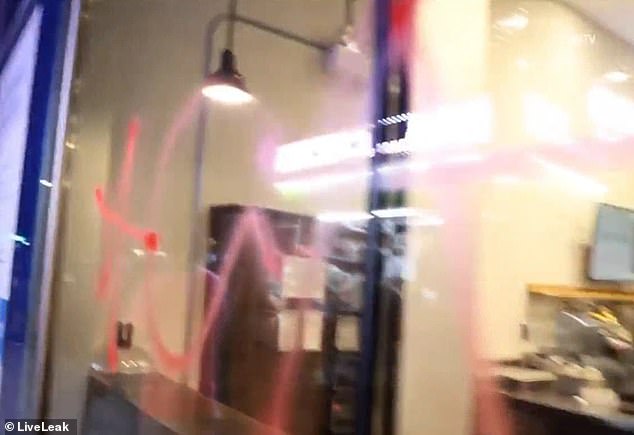 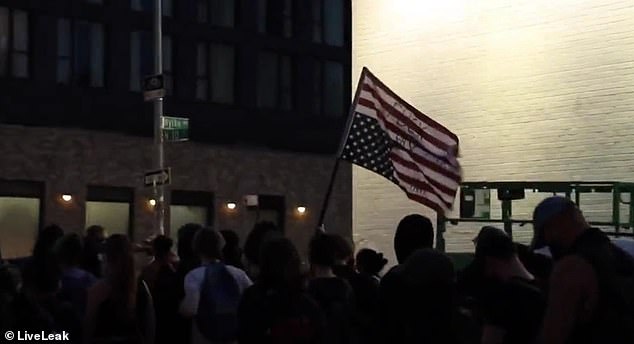 Antifa sympathizers are seen above marching through Williamsburg on Saturday night

Broken windows and graffiti were also said to have been spray painted on a Compass Real Estate outlet store just down the block.

One vandal wrote ‘Die Yuppy’, according to the New York Post.

‘I feel sentiment for the times, but this stuff is just senseless,’ a Compass employee told The Post.

‘They don’t even know what they’re doing. It’s just destruction for destruction’s sake.’

The employee added: ‘The irony of it is you can clearly tell that everyone on the video is white.

‘And it’s like, do you guys even know what you’re doing this for?’

The Antifa activists were marching in solidarity with the counter-demonstrators who clashed with members of pro-Confederate and white supremacist organizations in the Atlanta suburb of Stone Mountain, Georgia, on Saturday.

The Three Percenters militia, which organized the event, had applied last month to hold a more than 2,000-strong rally ‘to defend and protect our history and Second Amendment rights’ at the park, in response to a march by an all-black militia held on July 4.

Chaos unfolded in the city, just as officials had feared, as the rival groups faced off with each other for hours. People on both sides were seen carrying rifles.

Members of right-wing groups proudly waving their Confederate flags were seen coming face to face with anti-racism and anti-fascist activists.

Several Black Lives Matter supporters were spotted in heated confrontations with far-right activists, many of whom were wearing Trump 2020 shirts and hats. 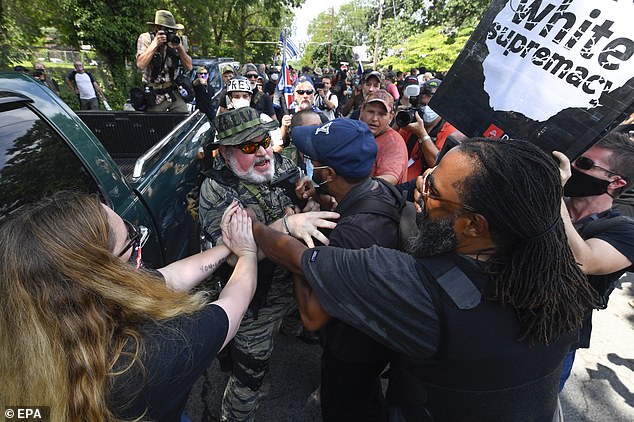 The Antifa march through Williamsburg on Saturday was staged in solidarity with left-wing protesters who clashed with pro-Confederate militias near Atlanta, Georgia, on Saturday. Tensions between the two rival groups reached a boiling point in Stone Mountain on Saturday as brawls broke out among members of opposing sides 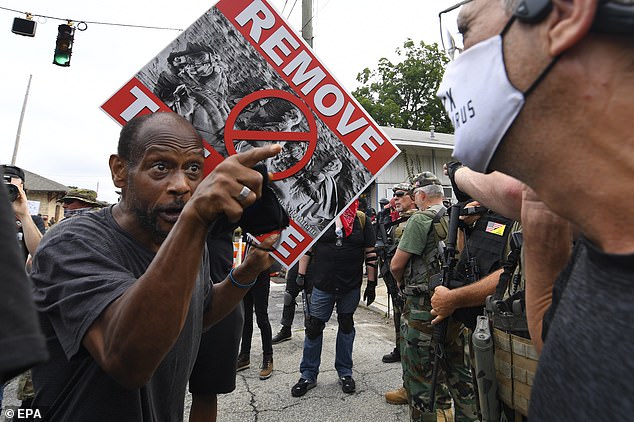 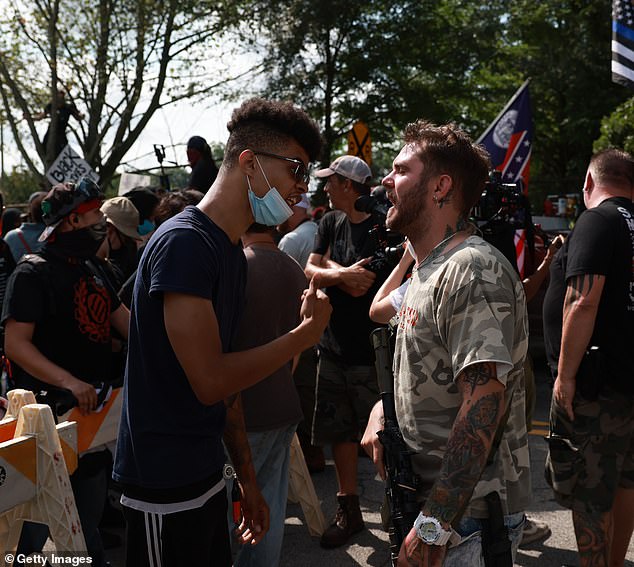 For the first few hours of the rally, things were relatively peaceful, aside from some shoving and pushing and spirited arguments

For several hours, there was little visible police presence and things were largely peaceful, aside from some shoving and pushing and spirited arguments.

But just before 1pm, tensions between the rival groups reached a boiling point, as brawls broke out among the crowd.

People from opposing sides were seen punching and kicking each other and throwing rocks, prompting police officers in riot gear to move in to disperse the crowds.

National Guard troops were also deployed to the scene as chaos erupted.