Police arrested multiple people on Melbourne's beaches on Saturday and have warned they will "not hesitate" to arrest those who continue to flout COVID-19 rules by gathering in public.

After thousands flocked to public parks and beaches to enjoy the warmer weather, police patrols were thick on the ground and police helicopters were seen circling above popular public venues. 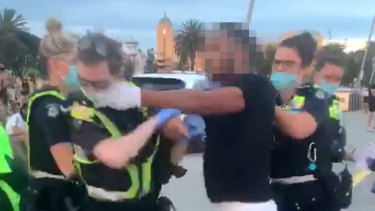 A man was arrested by police on the St Kilda beach foreshore on Saturday night. Credit:Nine News

In vision obtained by Nine News, one man was arrested by police on the St Kilda foreshore. The man, dressed in a black T-shirt and white pants, tried to break the hold of four police officers before being dragged to the ground and handcuffed.

Another man who allegedly assaulted officers in St Kilda on Saturday was arrested. The 24-year-old is expected to be charged with assaulting police, a police spokesman said.

In a separate incident that was widely circulated on social media, a woman at Altona Beach was arrested by police and walked off the sand in handcuffs.

As police tried to put a mask on the woman, people filming the incident could be heard yelling, "Why are you arresting her? What did she do?"

A police spokesman said they would not be commenting on individual arrests that occurred at beaches on Saturday, but said a number of arrests were made and fines were issued.

With a focus on public gatherings, police say they will "not hesitate to fine those who clearly and blatantly breach" COVID-19 restrictions.

"Victoria Police was pleased with the behaviour of the vast majority of Victorians [on Saturday] but disappointingly there were still those who put lives at risk by not adhering to the directions of the Chief Health Officer," the police spokesman said.

While Melbourne will reach a top of 28 degrees on Sunday, rain is likely to spoil the party for people hoping to soak up the sunshine. The Bureau of Meteorology is predicting showers in the late afternoon and evening and the possibility of thunderstorms over the eastern suburbs.

Premier Daniel Andrews warned on Saturday that police could close beaches around Melbourne if beach-goers did not adhere to social distancing.

"Victoria Police have powers. They have a steely determination to make sure people are following the rules," he said.

A number of bayside council leaders have said they would close the beaches if social distancing was continuously ignored or if instructed to by the state government or police.

Port Phillip council chief executive Peter Smith said if illegal behaviour continued, the council would have no choice but to repeat their March decision to close beaches, including the popular St Kilda beach.

"Unfortunately, if we have large crowds of people doing the wrong thing, then we will have no choice but to close the beach or park as a last resort," he said.

"We are trying to prevent closure through a range of measures. However, we will only be able to keep our beaches and parks open if each person plays their part by sticking to the Chief Health Officer’s orders."

Kingston Council mayor Georgina Oxley called for Melburnians to do the right thing and said closing beaches was "very much a last resort and we don't want to get there".

Clarke Martin, mayor of Bayside Council, said he was desperate for Melburnians to stick with restrictions until they are slated to ease on October 19.

"My message to Bayside residents and anyone who wants to come down to the beach is not to. Please, just stay away for another two or three weeks and let this virus eat itself out," he said.

Data released by Victoria Police shows that at the height of the first wave of the pandemic, the police assistance line received about 100,000 calls during the month of April, 66 per cent more than during an average month.

Nearly four in 10 were people dobbing in other Victorians for breaching coronavirus restrictions.

After calling the actions of those flouting the rules "a bit of an insult to everyone who has done it tough for months", Chief Health Officer Brett Sutton has praised those social distancing properly.

In response to a photo of small, separated groups of picnickers at Northcote's All Nations Park, Professor Sutton said on Twitter he was pleased to see people taking heed of the current restrictions.

"This is great. We can, and should, enjoy the outdoors. Safely. Well done," he tweeted.