A B&M employee threatened to smack a customer in the face and kick him down an escalator after he was told to stop filming inside the store, it is alleged.

The alleged incident happened inside the discount shop in Gloucester city centre today. 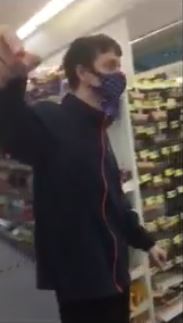 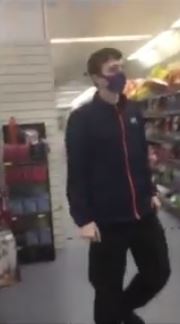 Footage shows the masked employee complaining about a man, who has been named as James Anthony, recording in the shop.

The shopper, who appears to be goading the member of staff, challenges him to "call the police" while continuing to film him.

Mr Anthony claims that he's entitled to film in a public place before the frustrated employee responds: "I'll smack him in the face."

The shopper then challenges the B&M employee to hit him as the two men head towards the escalator.

Video shows the pair arguing on the escalator before it grinds to a sudden halt.

The B&M employee can be heard saying: "You're recording me on private property. Get the f*** out."

He said: "Now, you've lost your job mate," as the B&M worker threatened to kick him down the escalator.

Mr Anthony can be heard describing the employee as a "f****** idiot."

The angry shopper refused to leave the store until he had spoken to a manager.

When approached by The Sun, B&M said they were unable to comment on the outburst due to privacy issues. 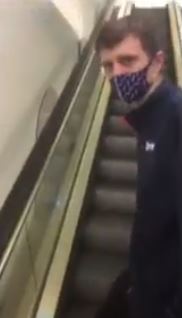