BRASILIA (Reuters) – Brazil President Jair Bolsonaro on Friday called for minimum retirement ages significantly lower than those proposed by his predecessor, sparking concerns among investors that he will back watered-down pension reform legislation. 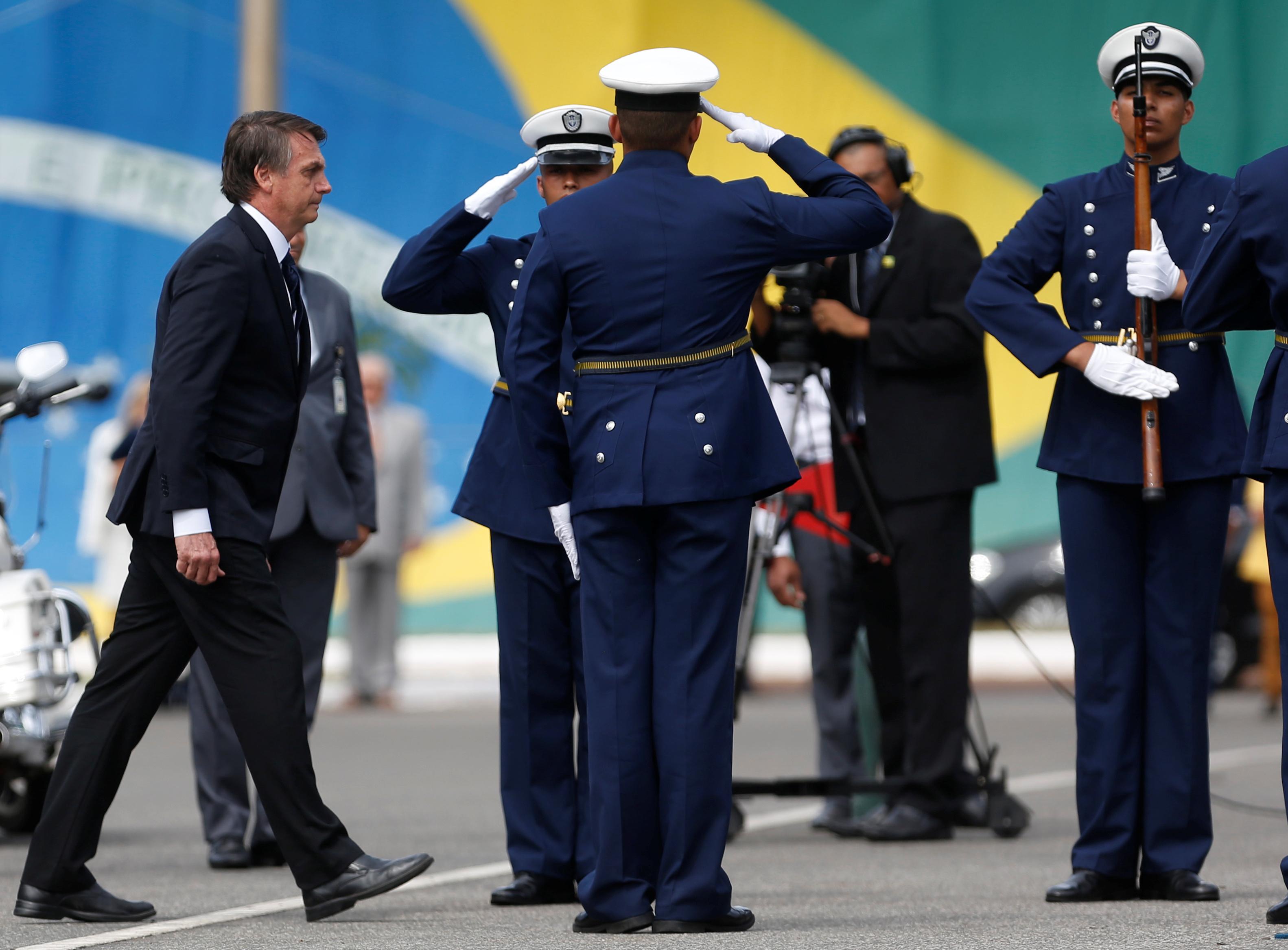 Bolsonaro also said regional security was the basis for his statement on Thursday that he might be willing to allow a U.S. military base on Brazilian soil as a way to counter Russian influence in Venezuela.

The newly inaugurated leader, speaking at an Air Force swearing-in ceremony on Friday, further said he is concerned that the latest proposal for the sale of 80 percent of Embraer’s commercial aviation business to Boeing Co could ultimately lead to the U.S. planemaker owning all of the new venture. It was the strongest expression of concern so far by his government over the tie-up.

Embraer shares were down more than 5 percent in late afternoon trading.

On pension reform, Bolsonaro told reporters at an Air Force event that the minimum retirement age would be 62 for men and 57 for women, effective five years after any legislation is passed.

That is lower than the minimums of 65 years of age for men and 62 for women that were proposed by ex-president Michel Temer.

Later on Friday, Bolsonaro’s Chief of Staff Onyx Lorenzoni appeared to walk back what Bolsonaro said on minimum age requirement, saying it was one option and that no final decision had been made by the president’s economic team.

A reform of Brazil’s bloated pension system will be among Bolsonaro’s biggest challenges, since he has yet to build a base in Congress. It is key to erasing the country’s 130 billion reais ($34.76 billion) public deficit for 2019.

Investors on Friday sent interest rates higher on futures markets, showing disappointment about the lower-than-expected minimum age. The head of one major foreign bank’s treasury desk saying that “it was not expected by the market and its unambitious, to say the least.”

Bolsonaro told reporters his government would have to raise the IOF tax on financial transactions to compensate for tax breaks extended to Brazil’s poor north and northeast. But tax revenue secretary Marcos Cintra later said that would not be necessary, after meeting with the president.

Since his inauguration on Tuesday, Bolsonaro has used executive orders to open up Brazil’s economy, crack down on violent drug gangs and redraw the country’s foreign policy while pushing conservative social measures.

Bolsonaro, a 63-year-old former Army captain and admirer of Brazil’s 1964-1985 military dictatorship and U.S. President Donald Trump, has quickly deepened ties with the Unites States and Israel, with plans to move the Brazilian embassy from Tel Aviv to Jerusalem.

In a television interview on Thursday night, Bolsonaro said he would be open to the possibility of the United States operating a military base in Brazil, a sharp shift in a foreign policy that has traditionally stressed neutrality.

He said he is worried about Russia’s closeness with Venezuelan leftist President Nicolas Maduro, whom he has repeatedly called a dictator.

A visit to Venezuela by two Russian nuclear-capable strategic bombers in December infuriated the U.S. government and alarmed Brazil’s military.

“I have discussed this internally and with interest in other countries in South America,” Bolsonaro told reporters on Friday when asked about hosting a U.S. base.

“We have to worry about our security and our sovereignty,” he said, adding: “I consider the American people our friends.”

On Friday, Justice Minister Sergio Moro ordered elite federal police to the northeastern state of Ceará, where suspected drug gang members have carried out dozens of attacks against banks and police barracks, and torched several buses. No deaths of bystanders have been reported.

Gangs across Brazil typically carry out such actions to spread fear and in response to police crackdowns on the streets or in prisons. Ceará state officials in recent days have said they would start sending prisoners to whatever jails had space, and not separate those incarcerated according to gang affiliation. Critics blasted the proposal, saying that it will result in immediate and bloody prison uprisings.

Earlier Friday, Bolsonaro stressed his desire for the quick passage of a bill to protect security officials and measures to open up competition in the banking sector.

The far-right president, elected on a law-and-order platform, warned in a tweet that sky-high violence would only slow if laws were passed to provide police and soldiers freedom from prosecution when on active duty. 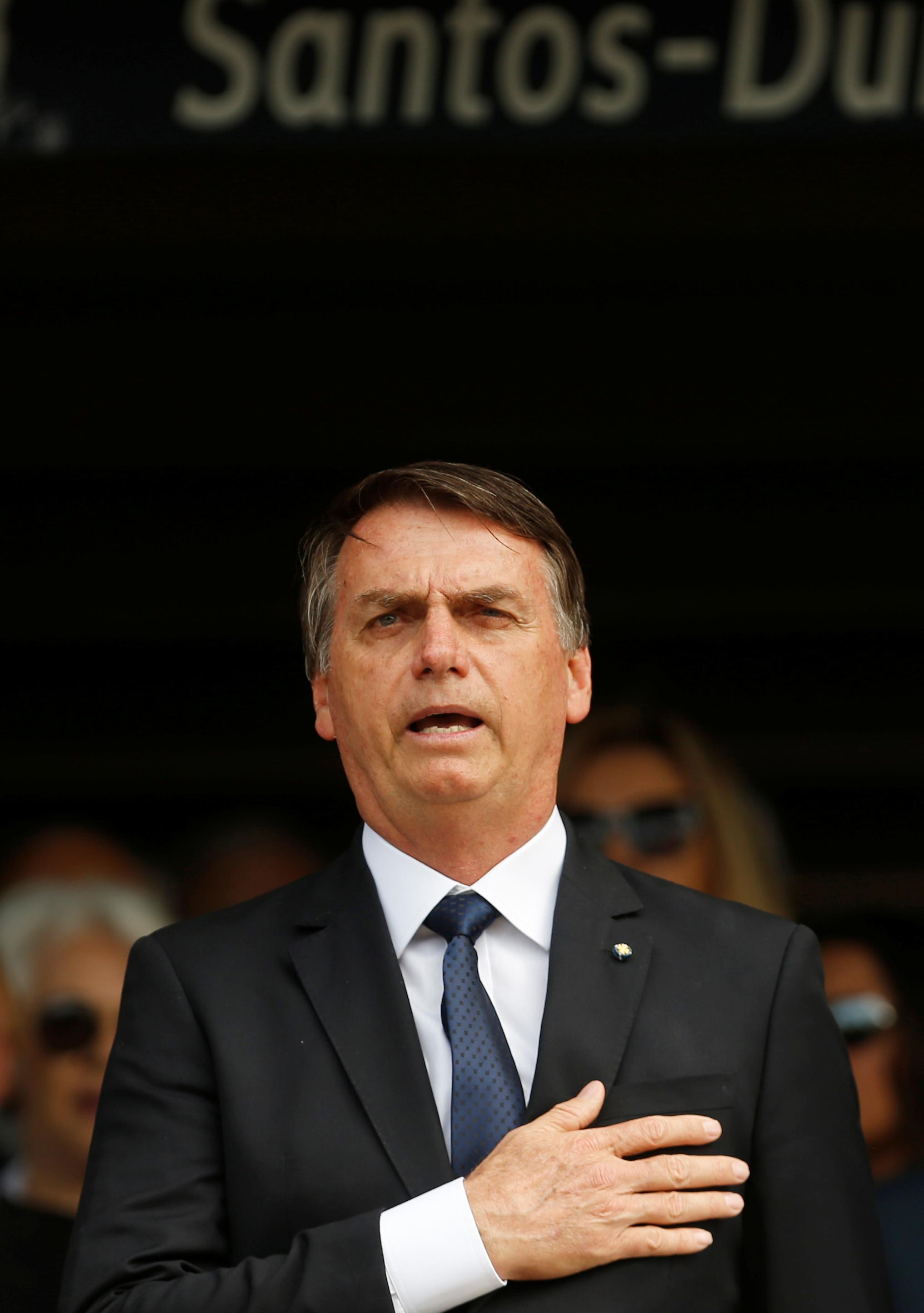 “The legislative, executive and judicial powers have to make this commitment urgently,” he tweeted.

Throughout the campaign, Bolsonaro said he wanted to give police and soldiers peace of mind while on often-violent operations, and he has also advocated broader access to guns so people can defend themselves.