The wonders of the animal world: Breathtaking images show creatures at their magnificent best – and YOU can help choose which will be crowned best photo

Nature fans all over the world now have the chance to choose the winner of the LUMIX People’s Choice Award for Wildlife Photographer of the Year 2018.

Now in its 54th year, the competition has brought together the most visually stunning photographs taken over the last twelve months from Dominica to the Antarctic Peninsula.

The Natural History Museum narrowed down 45,000 entries from 95 countries to just 25 of the best images from this year’s competition.

Last year the prestigious award was claimed by photographer Jo-Anne McArthur, who captured a connection between a man and a lowland gorilla in Cameroon, as the rescued animal was being moved between sanctuaries.

This year’s entries feature penguins foxes, owls, seals and lions. All 25 are on display at the Natural History Museum in London until June 2019.

The winner will be announced after voting closes at 14.00 (GMT) on Tuesday 5 February 2019. Cast your vote here. 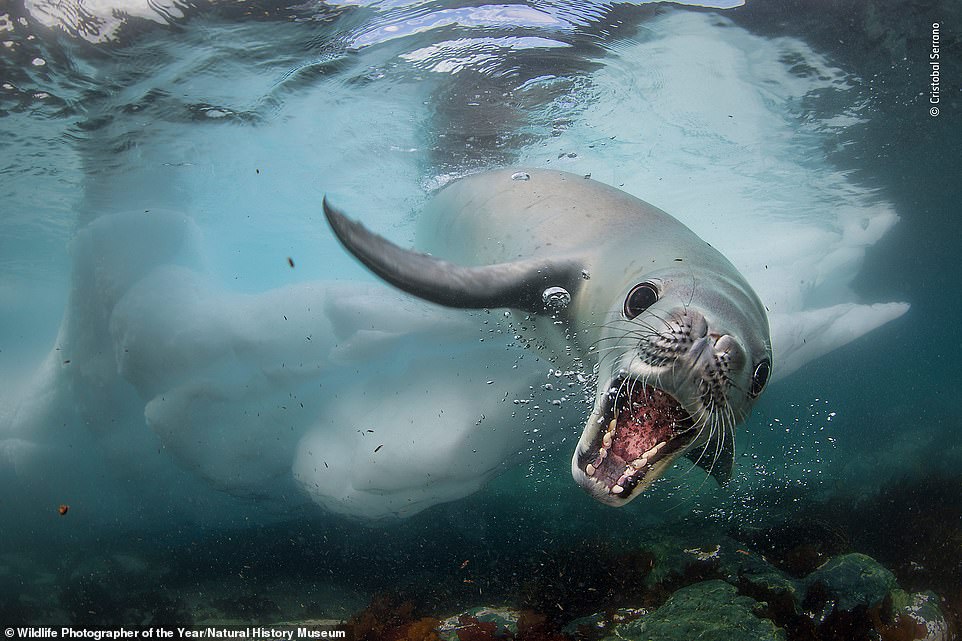 Curious Encounter by Cristobal Serrano, Spain – Cristobal captured this spontaneous encounter with a crabeater seal off Cuverville Island in the Antarctic Peninsula. The timing was perfect – the seal emerging from the wilderness looks right into the lens and appears curious and surprised 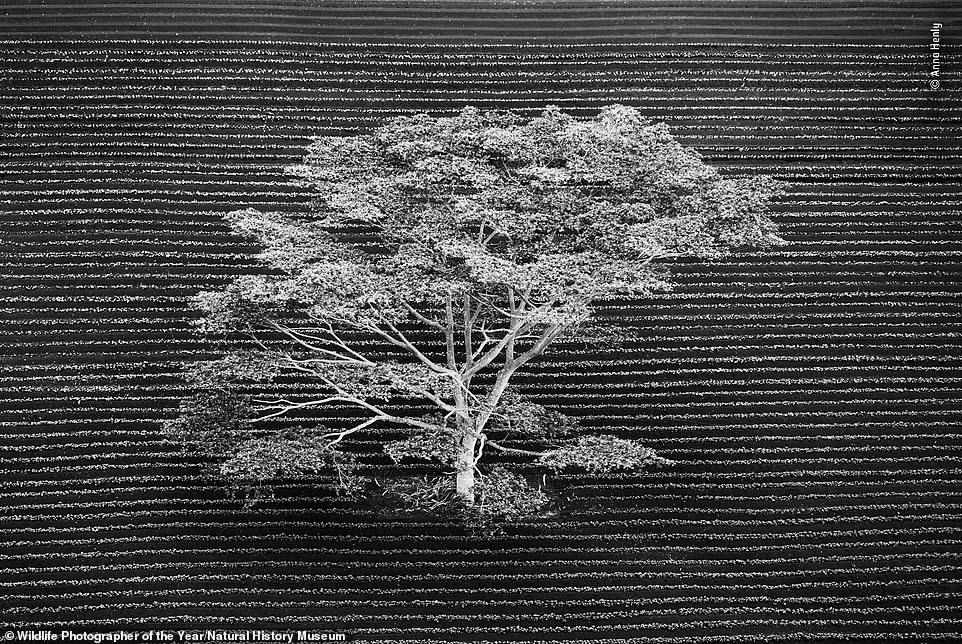 Isolated by Anna Henly, United Kingdom – This aerial shot taken from a helicopter caputres a solitary tree in a field on the edge of a tropical forest on Kauai, Hawaii. The straight lines that surround the lonely tree are the furrows of cultivated land ploughed by farmers. Look how they are interrupted by nature’s unruly pattern of tree branches 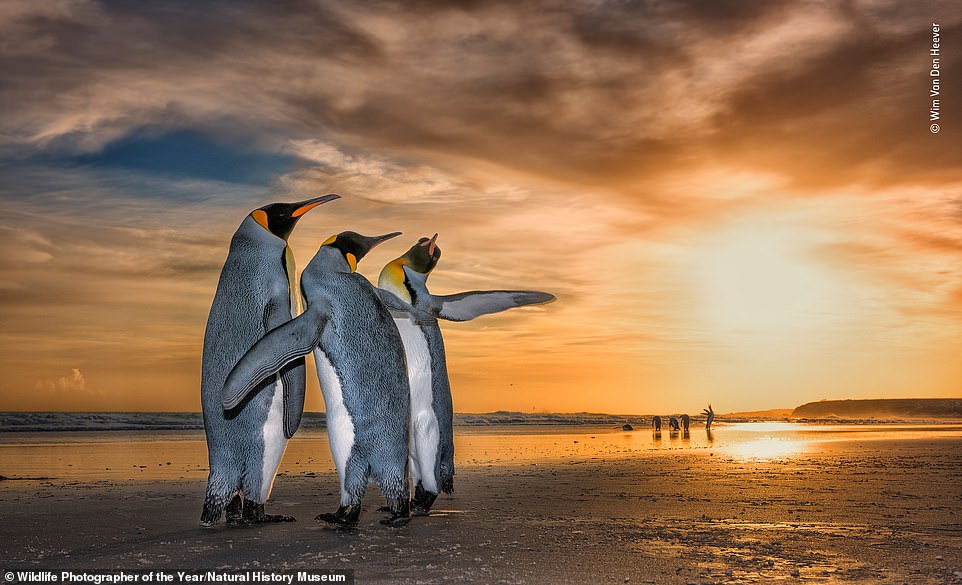 Three Kings by Wim Van Den Heever, South Africa – Wim captured these penguins at sunrise on a beach in the Falkland Islands off the coast of Argentina. Their behaviour is part of a fascinating mating ritual – the two males fighting over a female and circling her while using their flippers to fend each other off. In the background another group of penguins is seen playing in the sunlight 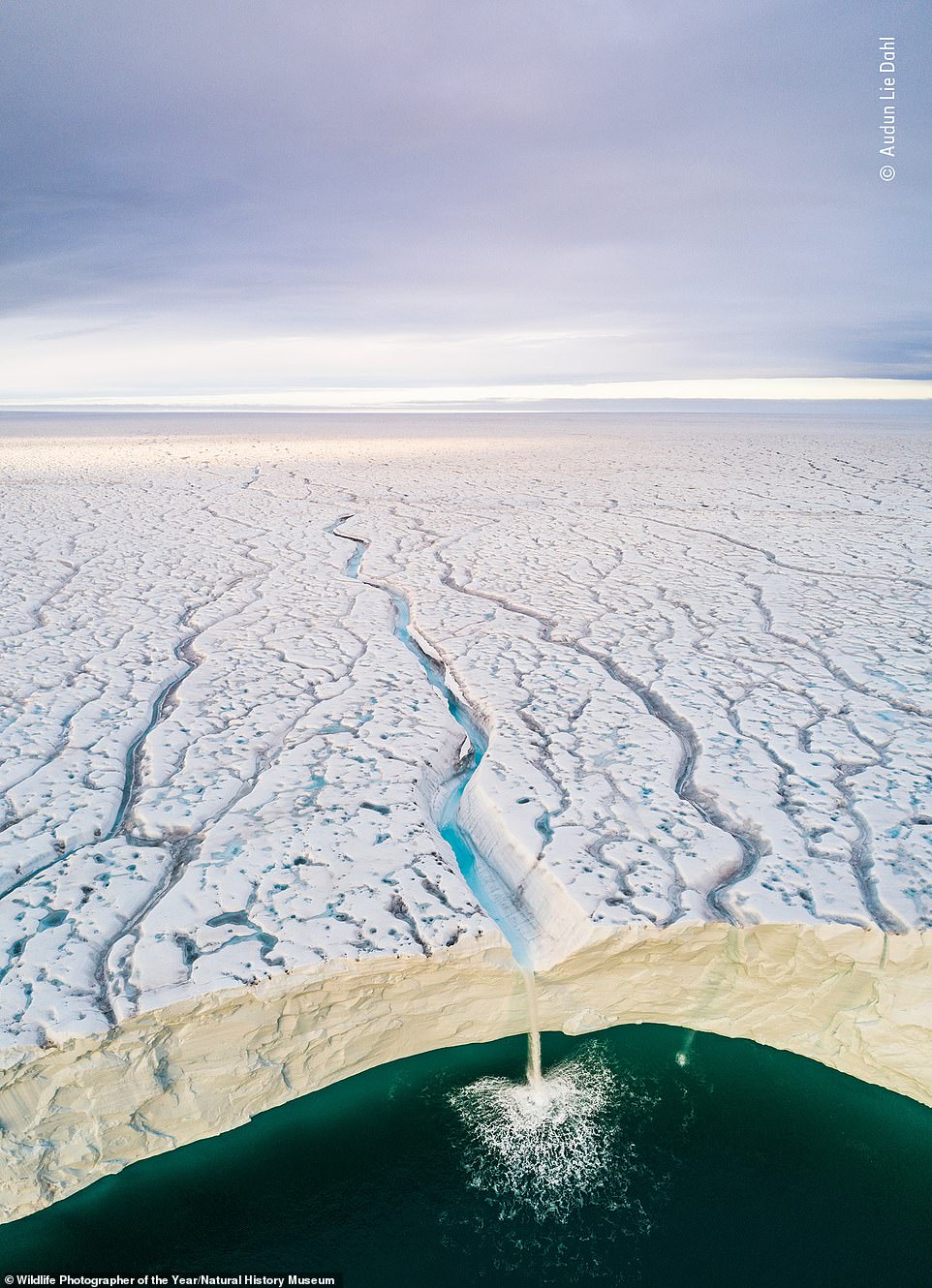 Ice and Water by Audun Lie Dahl, Norway – Audun captured this photograph using the cutting edge of aeriel technology – a controlled drone. It shows the Bråsvellbreen glacier in Norway, which moves southwards from one of the ice caps covering the Svalbard Archipelago. Where it meets the deep-green sea, the glacier wall is so high that only waterfalls are visible, hence the unique perspective 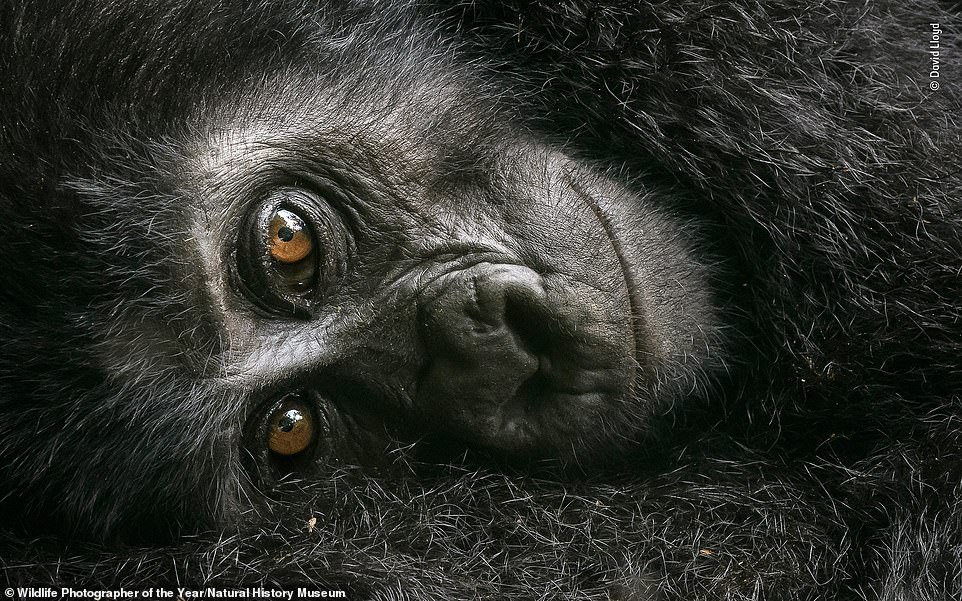 Resting Mountain Gorilla by David Lloyd, New Zealand / United Kingdom – David stumbled across a whole gorilla family while trekking in South Bwindi, Uganda. The baby gorilla clung to its mother whilst keeping a curious eye on him 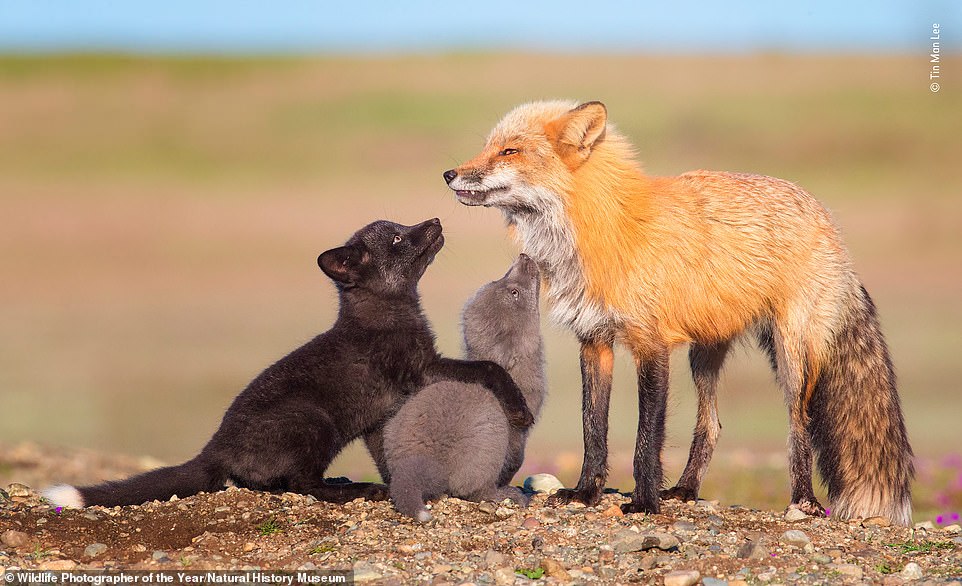 Red, Silver and Black by Tin Man Lee, United States – Tin waited days for good weather before finally managing to capture this touching moment between a family of red, silver and black foxes after he was told about their den Washington State, North America 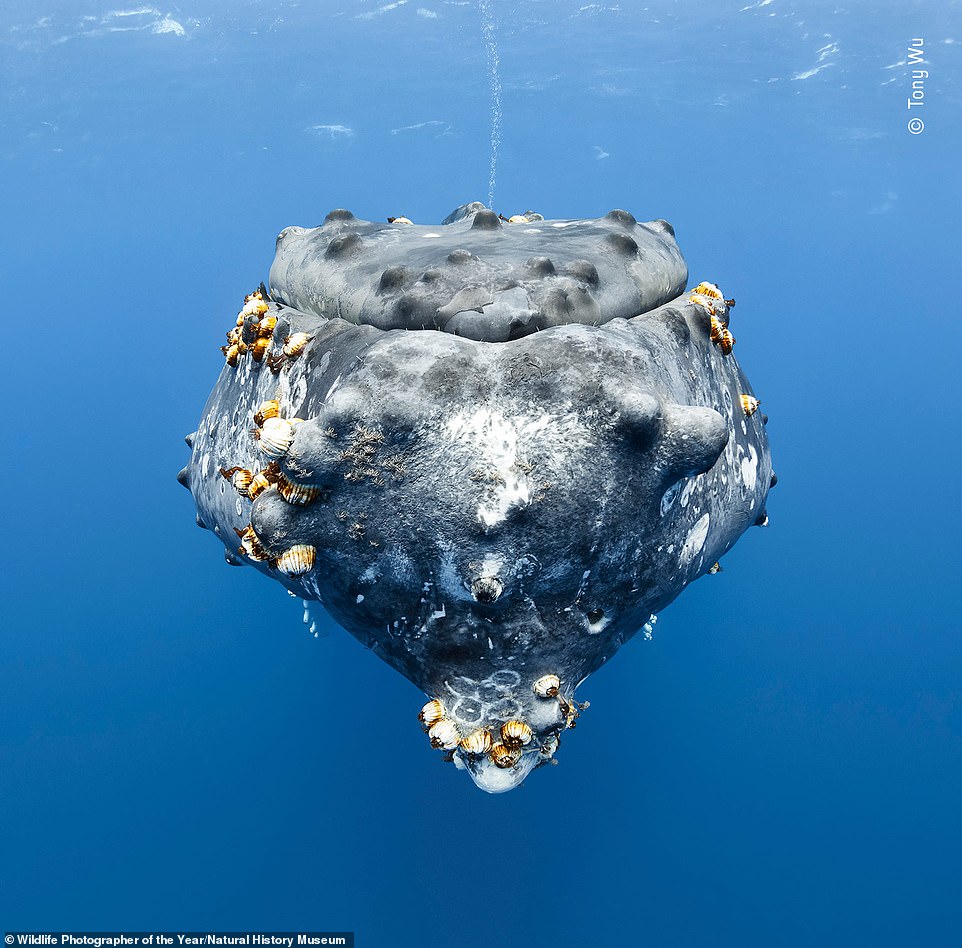 Sound Asleep by Tony Wu, USA – This fast-asleep adult humpback whale was photographed in Vava’u, Kingdom of Tonga. It sleeps perfectly poised in mid-water. The stream of bubbles that can be seen emitting from the whale’s two blowholes shows – in this instance – that it is extremely relaxed 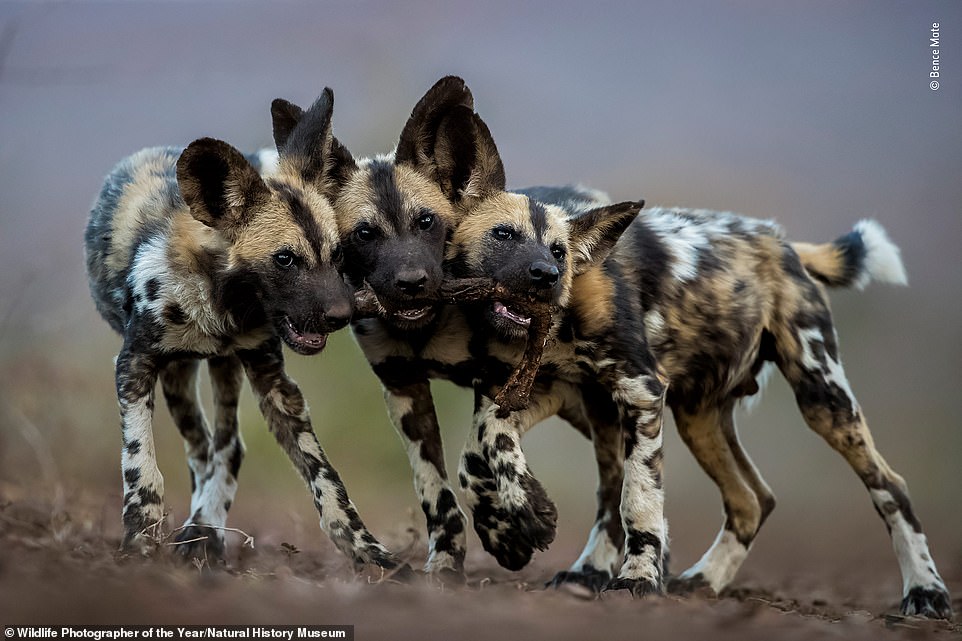 One Toy, Three Dogs by Bence Mate, Hungary – African wild dogs – recently featured on Sir David Attenborough’s BBC programme Dynasties – can be merciless killers. However their pups, photographed in Mkuze, South Africa, just want to play all day long. These brothers found the leg of an impala and each wanted it drag it in a different direction 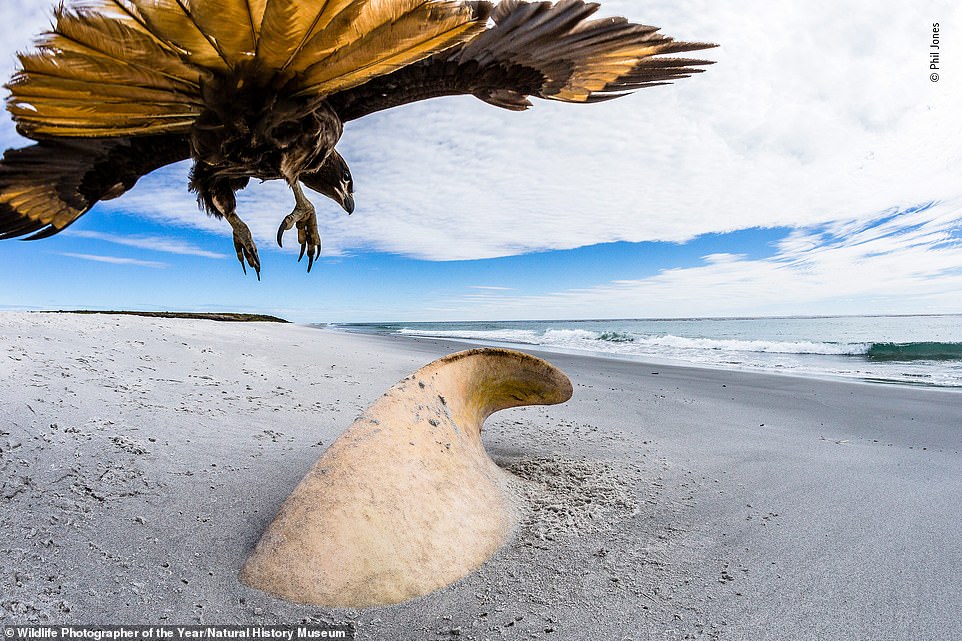 All That Remains by Phil Jones, UK – This striated caracara was seen scavenging on what remains of a male orca that had beached itself on Sea Lion Island, Falkland Islands, about a week before Phil’s visit. Despite the orca’s huge size the shifting sands had almost covered the whole carcass 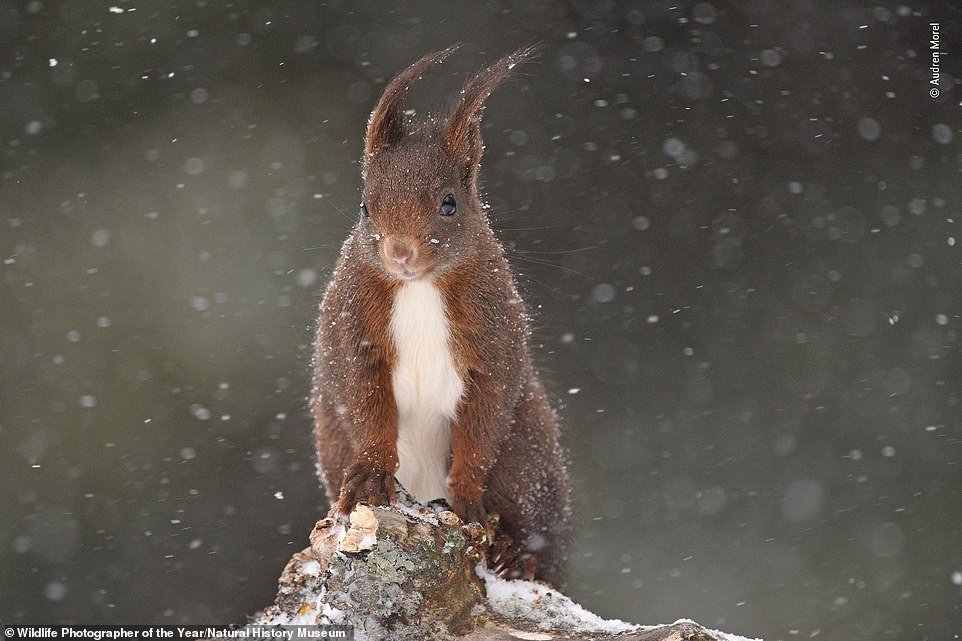 Under the Snow by Audren Morel, France – Braving a snowy blizzard, this inquisitive squirrel wanted to inspect Audren as he was taking photographs of birds in the small Jura village of Les Fourgs, France. Impressed, Audren turned his camera on the squirrel instead 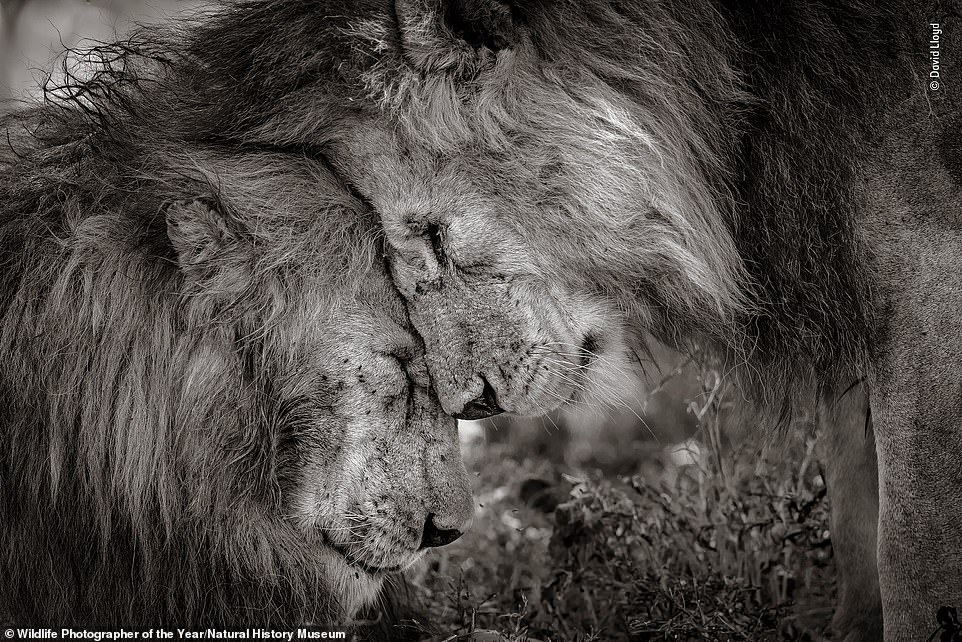 Bond of Brothers by David Lloyd, New Zealand / UK – These two adult male lions, who are most likely brothers, greeted and rubbed faces for 30 seconds before settling down in an incredible display of animal sentience 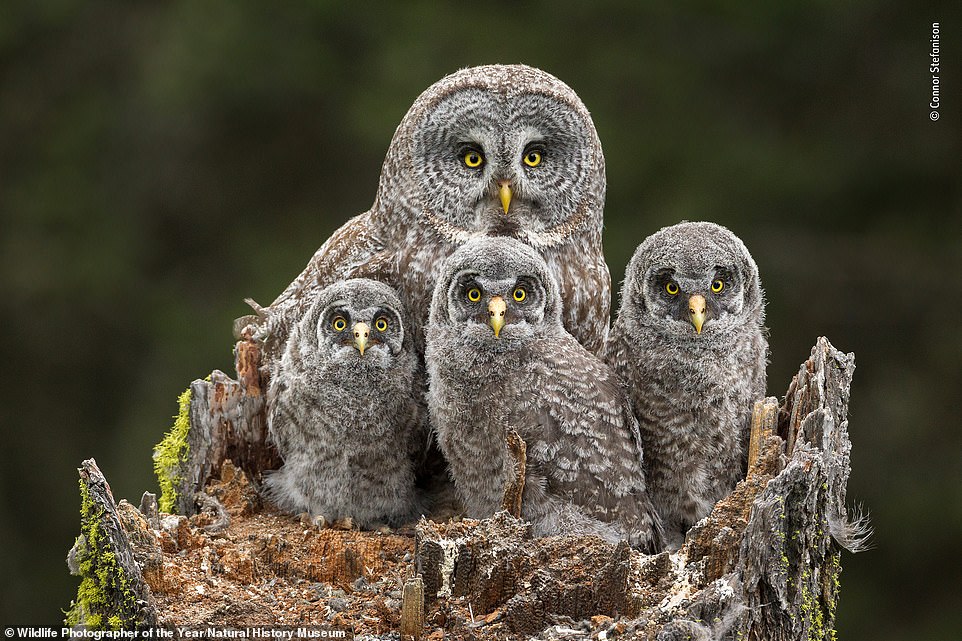 Family Portrait by Connor Stefanison, Canada – Connor observed this great grey owl and her chicks in their nest in the broken top of a Douglas fir tree in Kamloops, Canada. They looked towards him twice but he still managed to capture this photo as he watched them from a tree hide 50 feet (15 metres) up 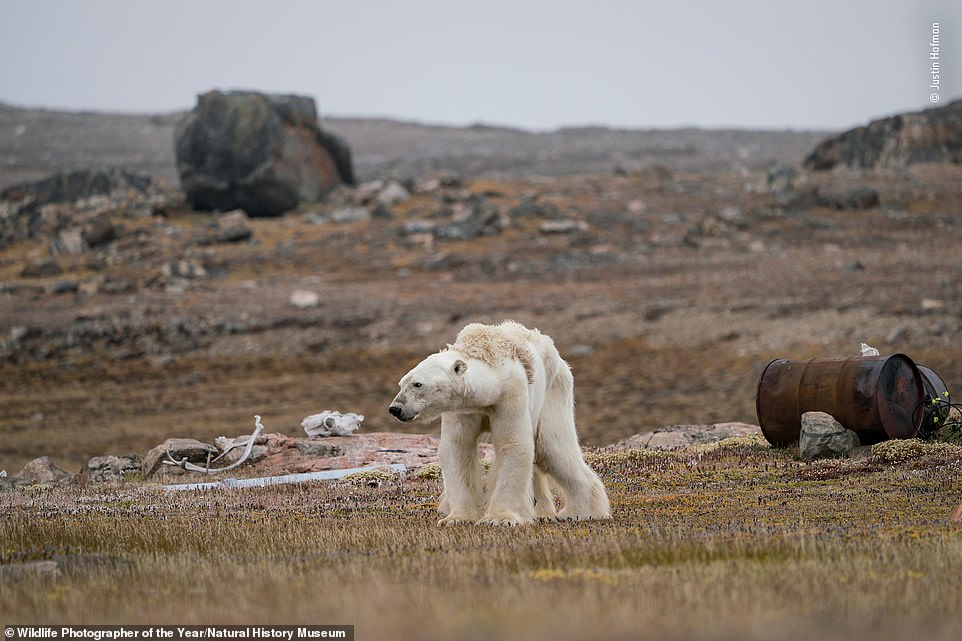 A Polar Bear’s Struggle by Justin Hofman, USA – This poignant image which has already caused a sensation online shows a starving polar bear at an abandoned hunter’s camp in the Canadian Arctic, slowly heaving itself up to standing 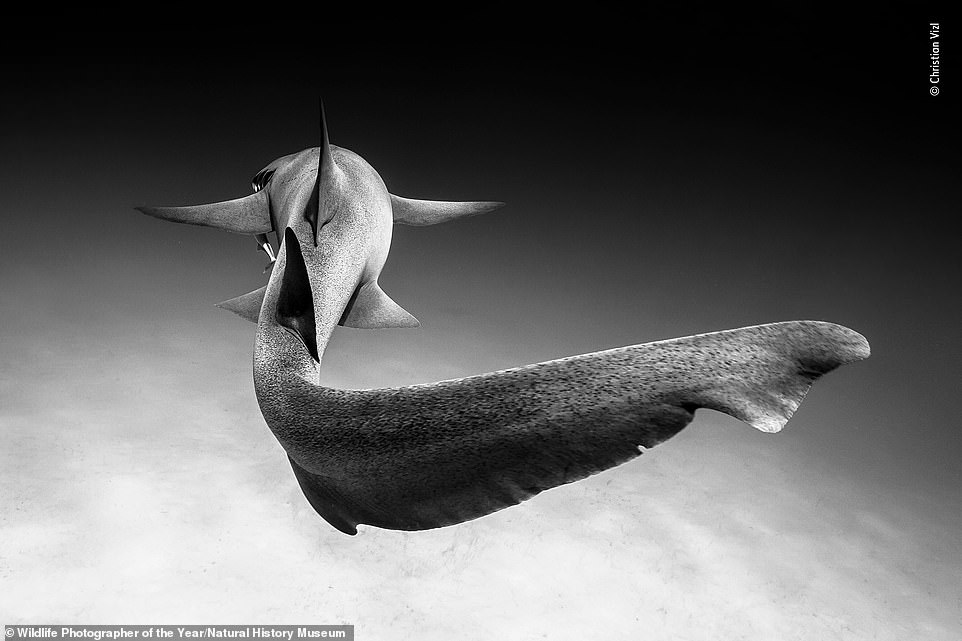 Gliding by Christian Vizl, Mexico – Christian took this shot of a nurse shark swimming off the coast of Bimini in the Bahamas, on a day with perfect light and visibility. Typically these sharks are found near sandy bottoms where they rest, so it’s rare to see them swimming 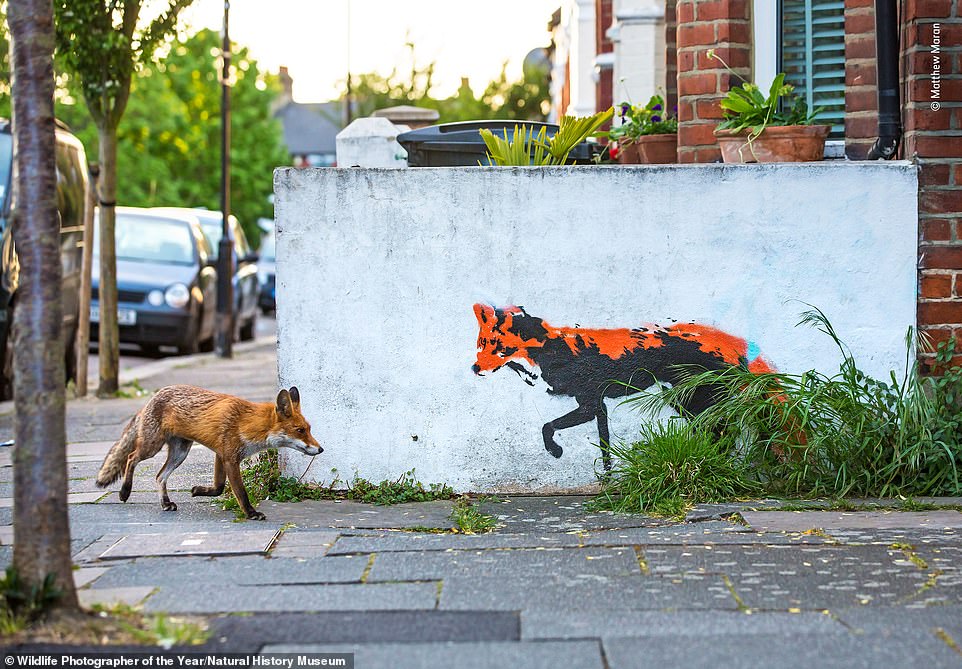 Fox Meets Fox by Matthew Maran, UK – Matthew has been photographing urban foxes near his north London home for over a year. He had dreamed of capturing an image like this ever since he first saw this piece of street art 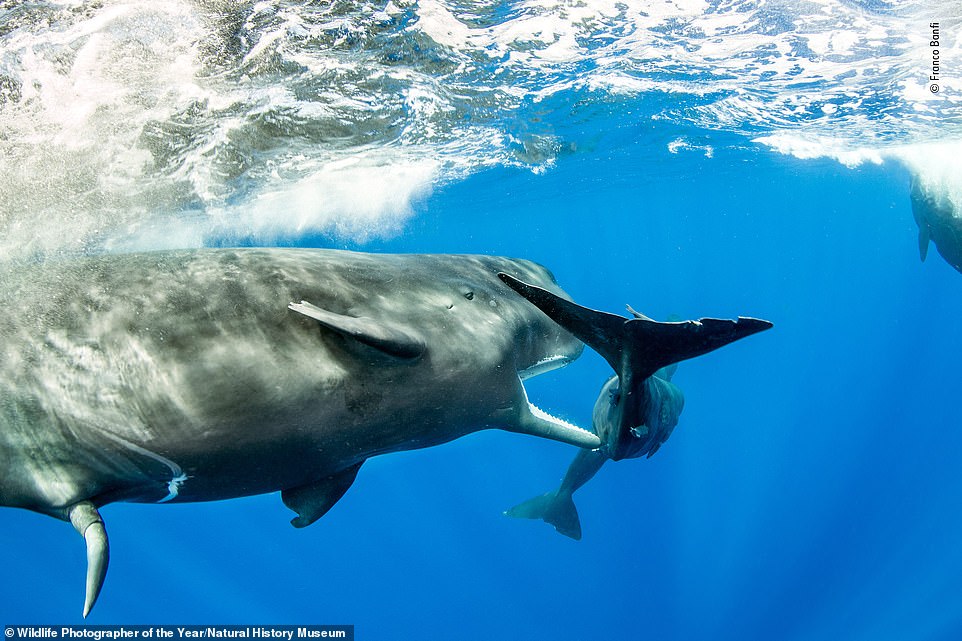 Teenager by Franco Banfi, Switzerland – Franco witnessed this young male sperm whale trying to mate with a female when he was free diving off Dominica in the Caribbean Sea. But owing to the presence of her calf the frisky male had to continually chase it off 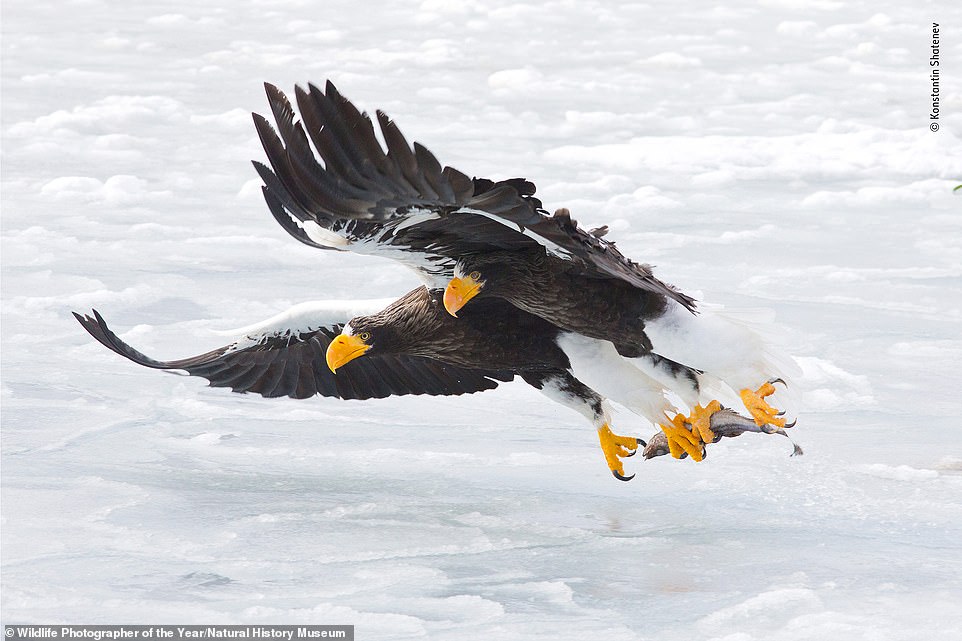 The Extraction by Konstantin Shatenev, Russia – Konstantin captured this photograph, showing Steller’s eagles carrying a dead fish, from a fishing boat. Every winter, hundreds of sea eagles migrate from Russia to the relatively ice-free northeastern coast of Hokkaido, Japan.  They hunt among the ice and also scavenge on discards from fishing boats 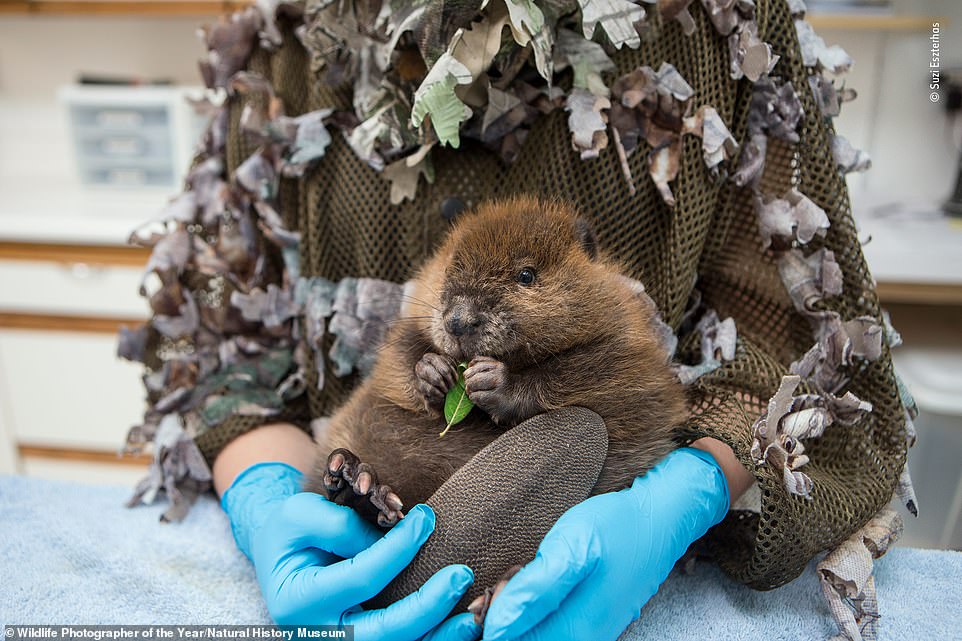 The Orphaned Beaver by Suzi Eszterhas, United States – This one-month-old beaver, held by a caretaker at the Sarvey Wildlife Care Center in Arlington, Washington had been orphaned, but luckily the center managed to find a female beaver to take on the role of mother and they were released into the wild 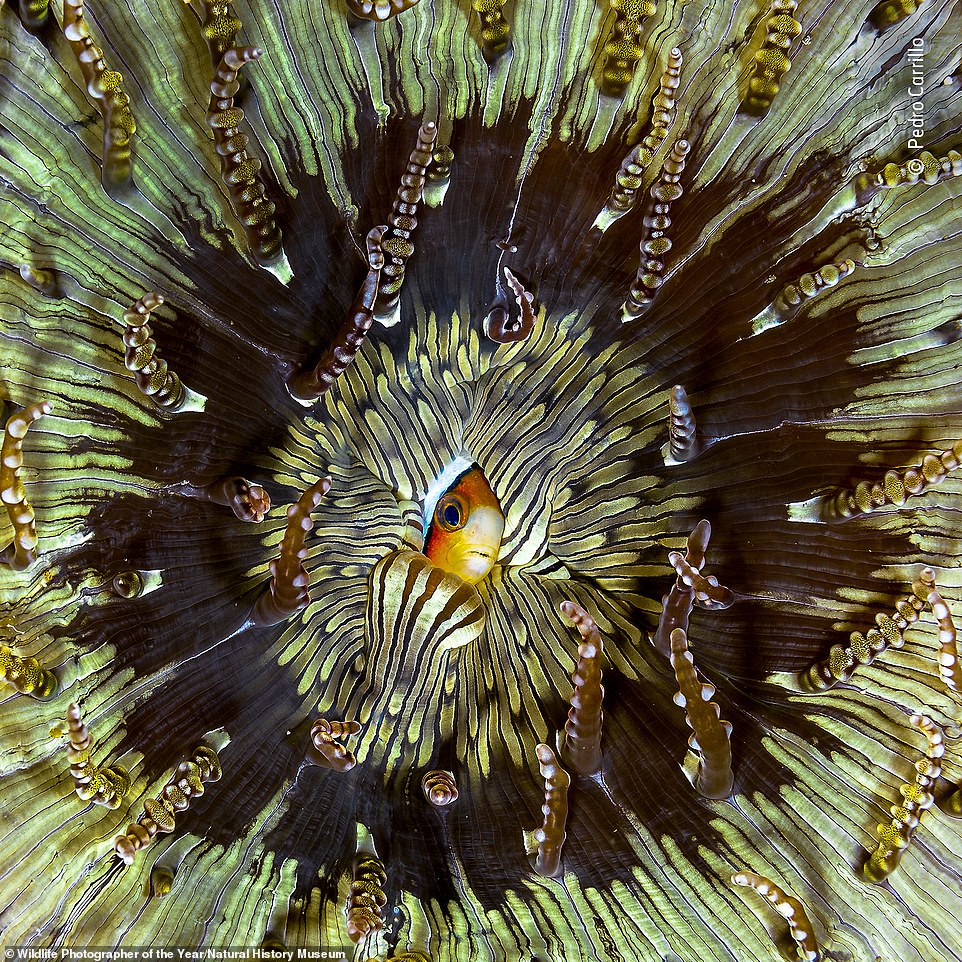 Shy by Pedro Carrillo, Spain – The incredible pattern of a beaded sand anemone frames a juvenile Clarkii clownfish in Lembeh strait, Sulawesi, Indonesia. Known as a ‘nursery’ anemone, it is often a temporary home for young clownfish until they find a more suitable host anemone for adulthood 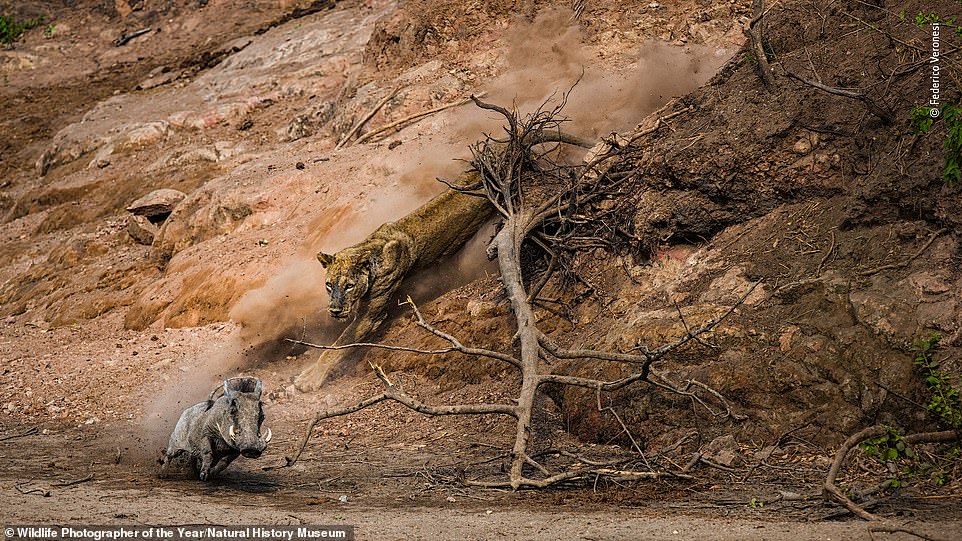 Ambush by Federico Veronesi, Kenya – Taken one hot morning in Chitake Springs, in Mana Pools National Park, Zimbabwe, the image shows a lioness chasing her prey after lying in wait at the top of a riverbank and visiting a nearby waterhole 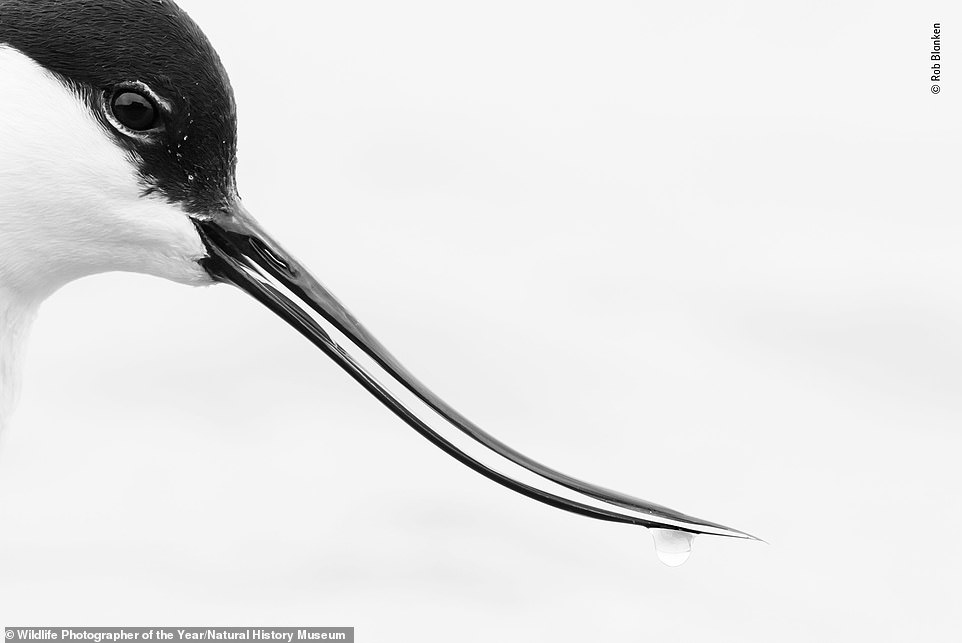 Unique Bill by Rob Blanken, The Netherlands – Pied avocets have a unique bill, which it sweeps like a scythe, to find food in shallow water. This photograph shows the delicate beak with a droplet of water falling of it, and was taken from a hide in the northern province of Friesland in The Netherlands 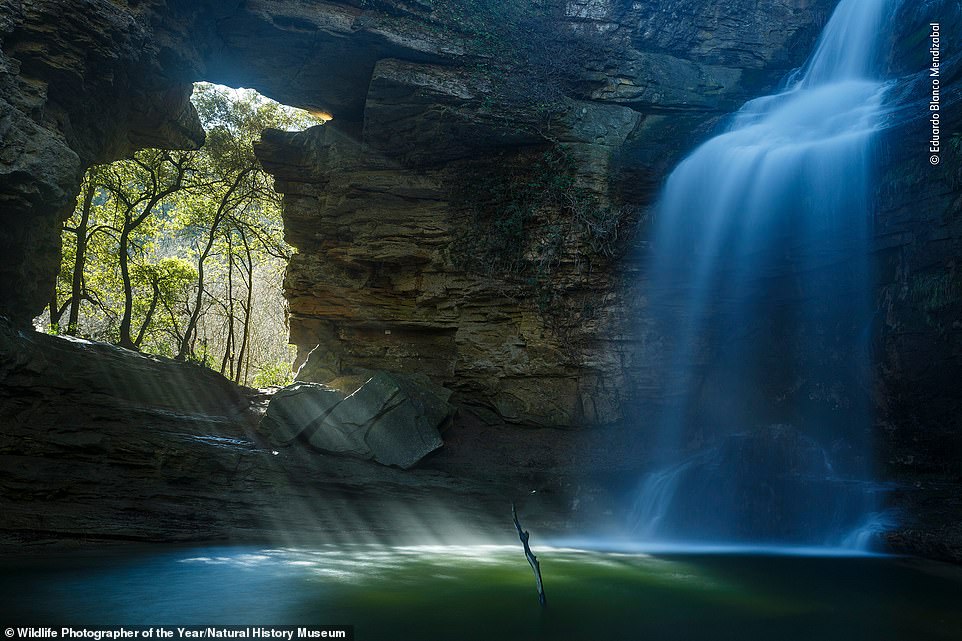 Painted Waterfall by Eduardo Blanco Mendizabal, Spain – Eduardo managed to capture the magical moment the the sun beamed through a hole in the rock at the foot of the La Foradada waterfall, Catalonia, Spain and created an otherwordly pool of light 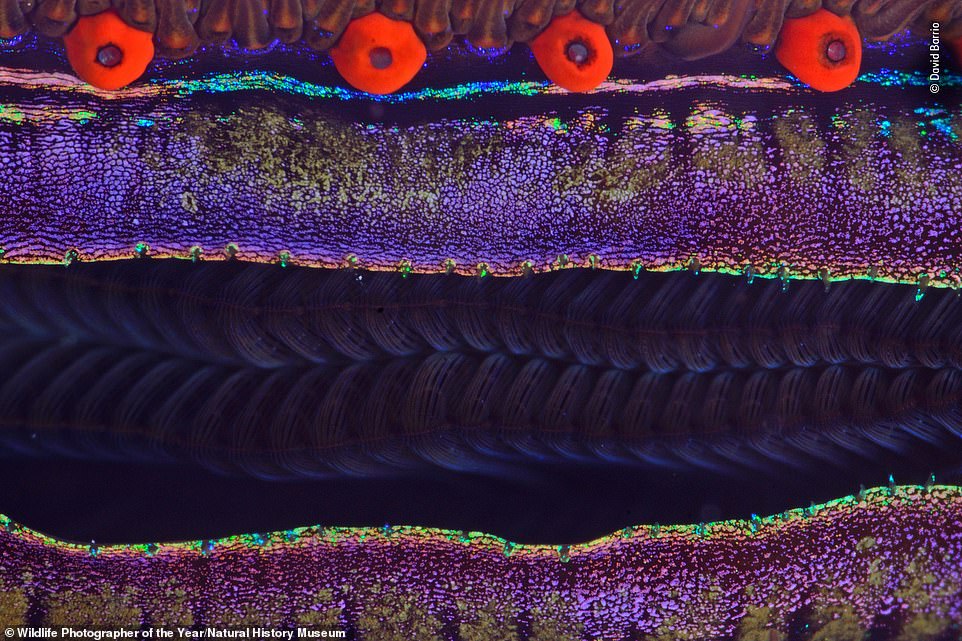 Clam Close-up by David Barrio, Spain – This macro-shot of an iridescent clam was taken in the Southern Red Sea, Marsa Alam, Egypt. These clams nest and grow embedded amongst stony corals and David had to be slow and extremely careful in approaching this clam for the shot – if it sensed danger it would have snapped shut 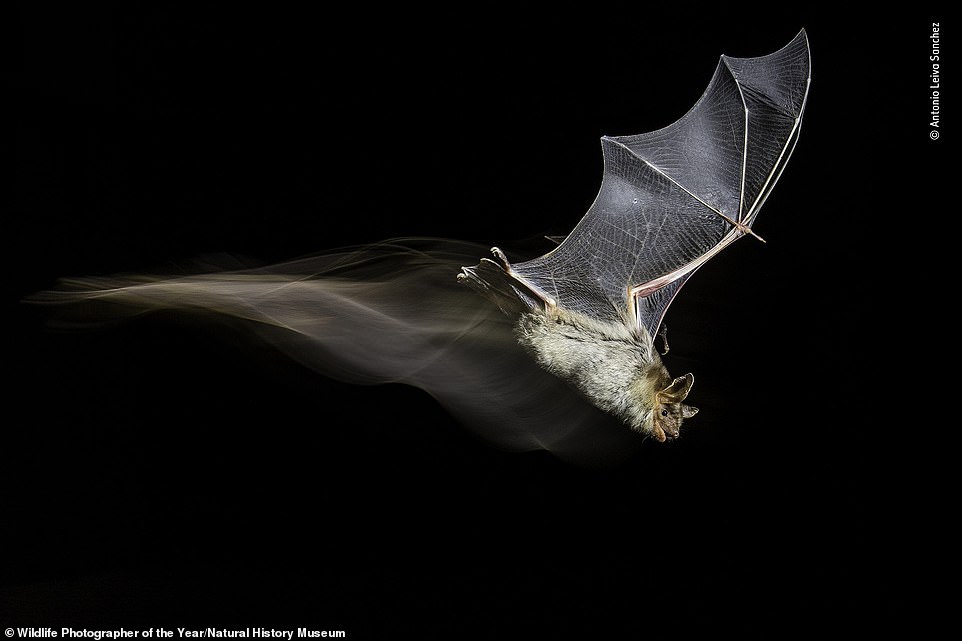 The Bat’s Wake by Antonio Leiva Sanchez, Spain –Antonio managed to capture this bat mid-flight using a technique of high speed photography with flashes combined with continuous light. It is the result of several months of field research into a little colony of greater mouse-eared bats in Sucs, Lleida, Spain 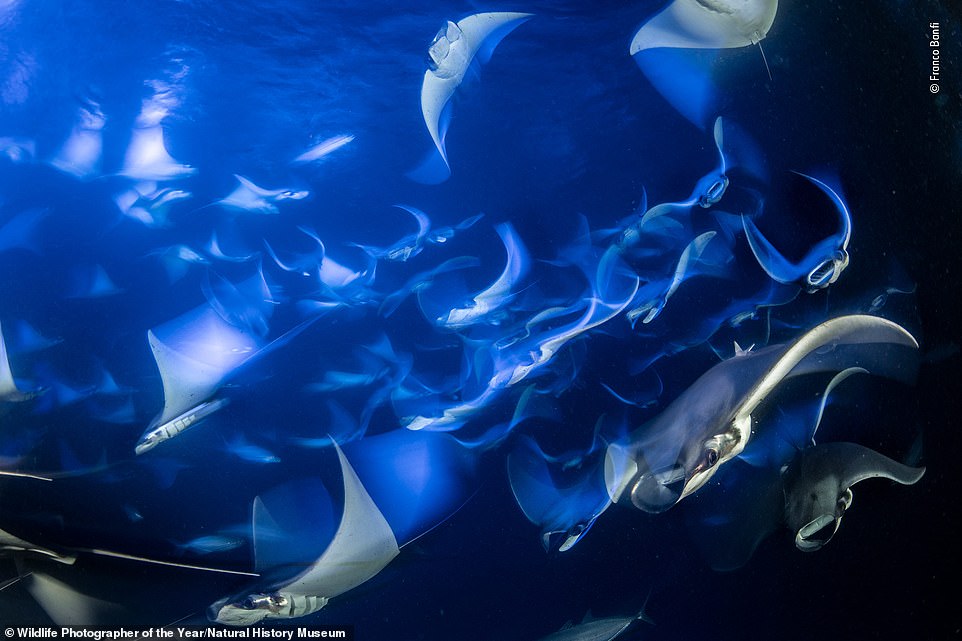 Otherworldly by Franco Banfi, Switzerland – Franco captured this ghostly shot using underwater lights from his boat and a long exposure. It shows a school of Munk’s devil ray feeding on plankton during the night off the coast of Isla Espíritu Santo in Baja California, Mexico

Michelle Keegan’s sauciest ever scenes from romping in...

Did Marilyn Monroe have plastic surgery? | The...

Conspiracy nuts convinced this 85-year-old mural of colonial America ‘proves’ time travel exists… can you spot why? | The Sun
Celebrities