Arctic air will force temperatures down to as low as -9C (15.8F) in parts of Britain tonight, bringing the coldest night of autumn so far and widespread frost across the country.

The ‘Arctic swell’ blowing from the North Pole into the UK means areas of Britain are now colder than Helsinki in Finland, with Tulloch Bridge in Scotland recording an overnight temperature of -8.6C (16.5F).

Public Health England has issued a cold weather alert for the North and Yorkshire and Humber regions, running until 12pm on Wednesday, urging people to watch out for the elderly and those with heart and lung problems.

Meanwhile, the UK is also set to be hit by more flooding this week, with two inches of rain expected to fall starting in western areas today, with other parts including flood-hit Yorkshire affected from Thursday. 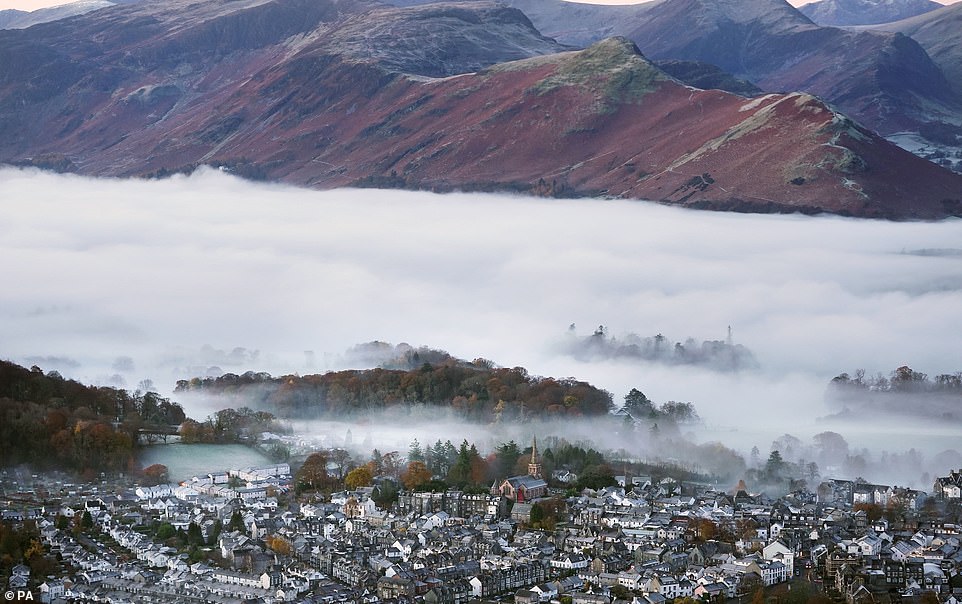 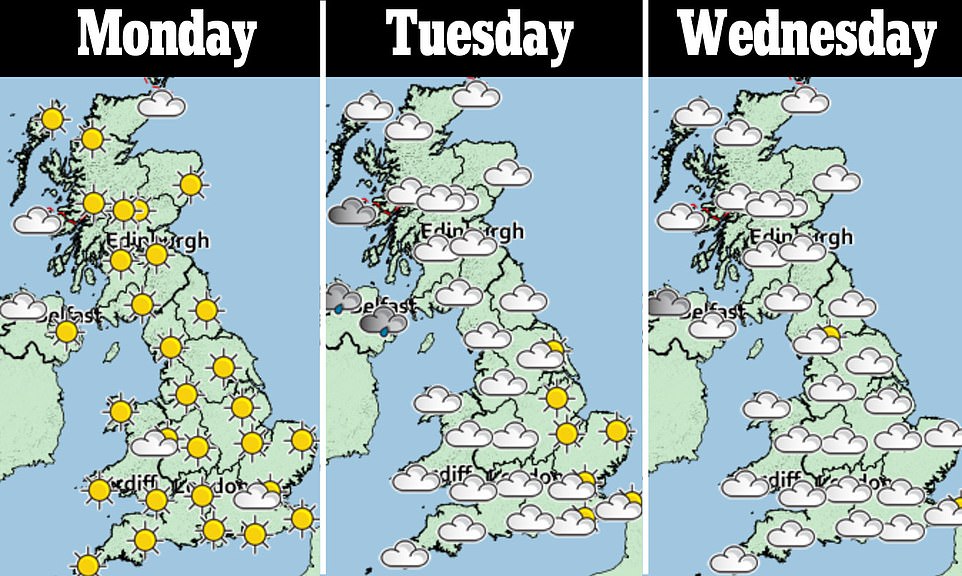 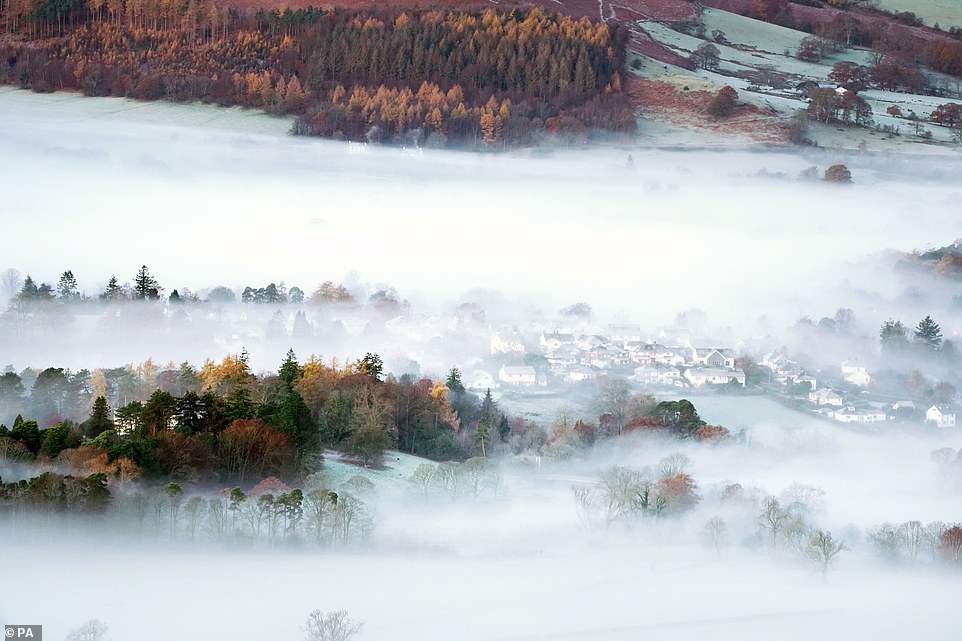 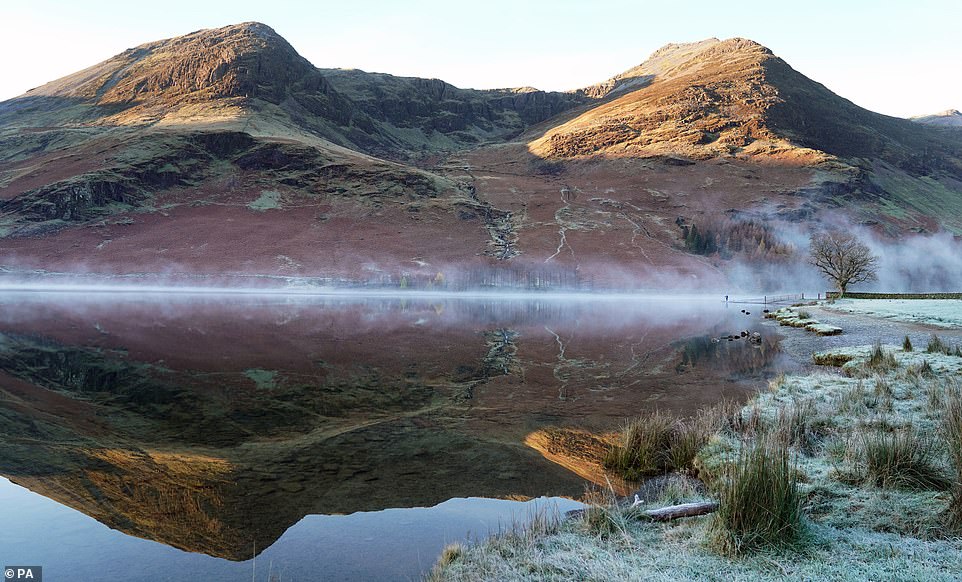 The Environment Agency has 80 flood alerts and 45 more serious warnings in place for England today, and this comes after intense snowfall in the west last Wednesday, making it England’s earliest snow for the past 11 years

There is also a risk of a ‘very cold start’ tomorrow, with temperatures of -5C (23F), while the north faces snow flurries on higher ground. Fog is also expected across central and South East England, and eastern Wales.

Last night, temperatures equalled the lowest of the autumn so far in Scotland. In Northern Ireland the lowest temperature recorded was -5.1C (22.8F) in Katesbridge, County Down.

The Met Office said tonight would be cold and frosty for many areas and could be the coldest night across the UK as a whole. Locally, temperatures could fall to -9C (15.8F) in rural Scotland and -7C (19.4F) in England and Wales.

But a spokesman said the current cold spell may soon come to an end, with temperatures recovering throughout the week. People across the UK can expect sunshine today and temperatures will rise across the board. 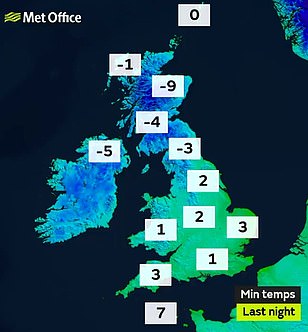 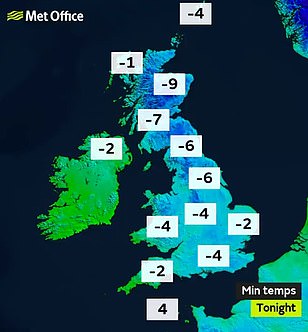 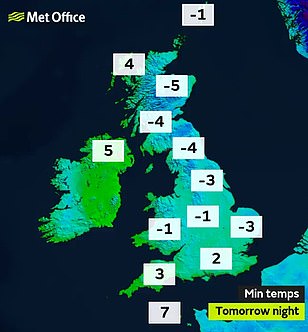 Temperatures fell to -8.6C in Scotland last night (left), and are expected to drop to similar levels overnight tonight (centre) 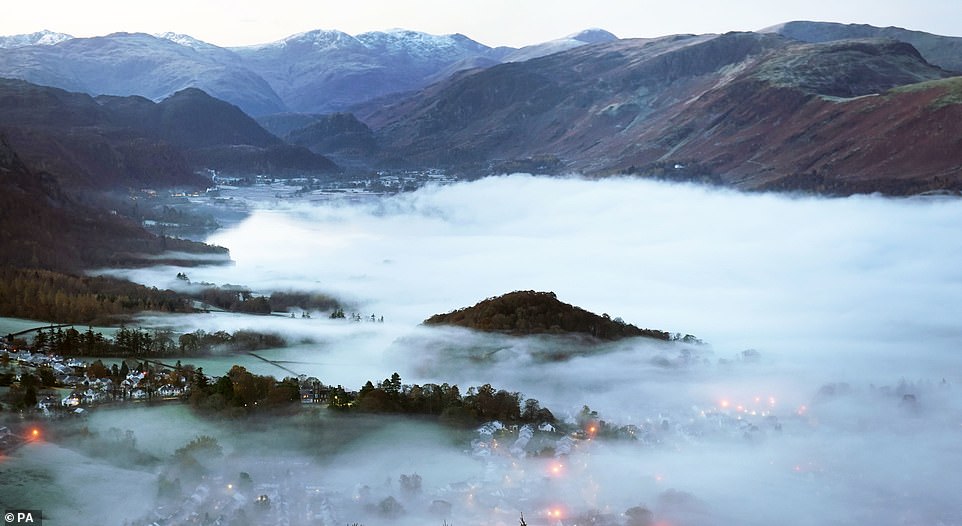 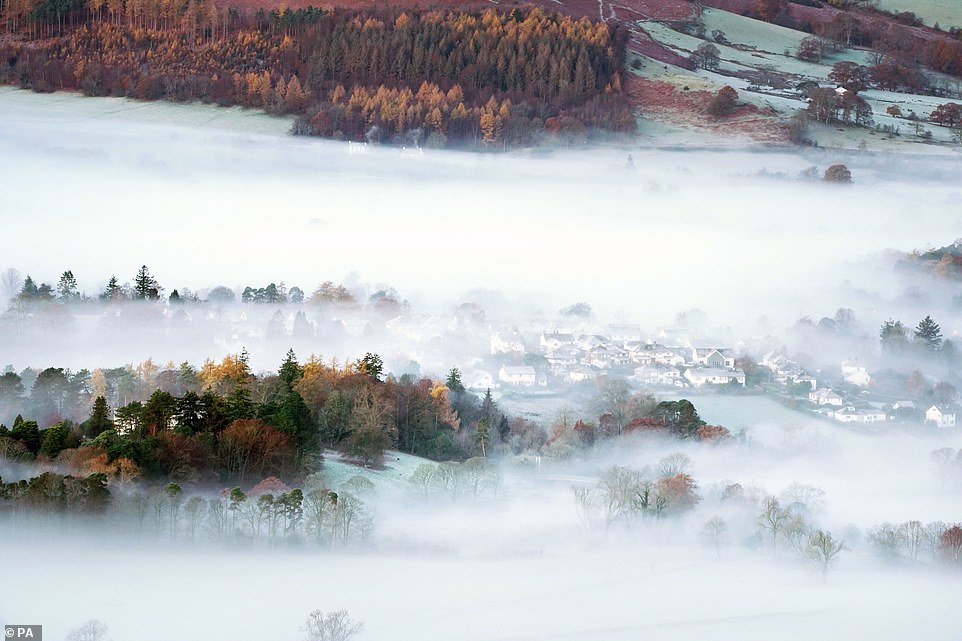 Mist in Keswick today. Forecasters say there is a ‘risk of seeing a very cold start’ tomorrow, with temperatures of -5C (23F) 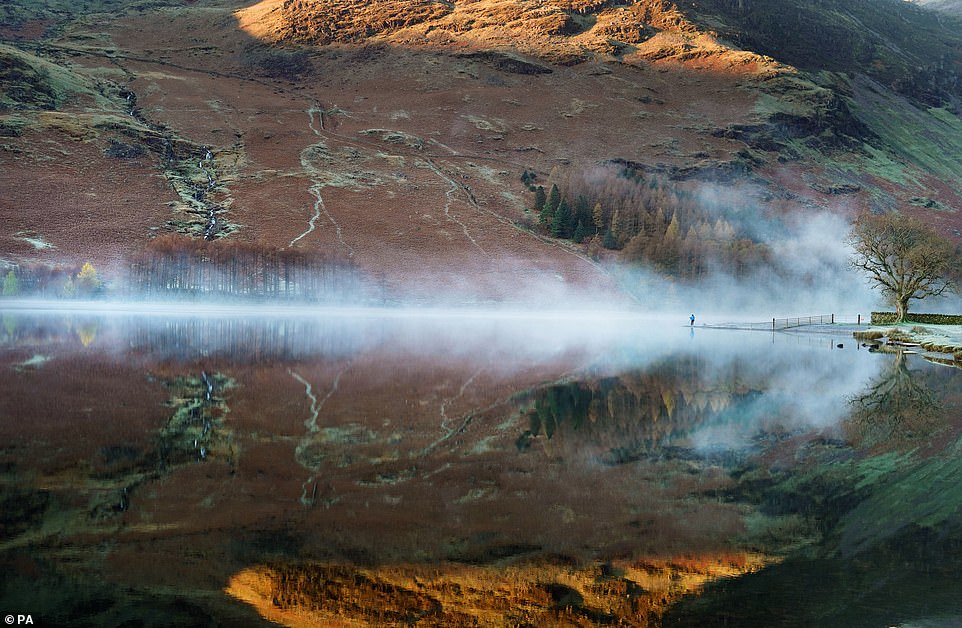 Mist over Buttermere Lake this morning. Last night, temperatures equalled the lowest of the autumn so far in Scotland

There is also a chance of showers on the North Sea coast and in the far east of Scotland. Met Office meteorologist Alex Burkhill said: ‘There’s low pressure to the south-east of the UK, which is dragging in cold, northerly air.

‘A weak ridge of high pressure is trying to build in from the west. That’s the reason we have these largely clear skies developing overnight. Another system is waiting in the wings in the Atlantic.

‘So Scotland has become sandwiched between these fronts. This will produce sunny conditions on Monday but it will remain cold by day – no more than 6C (42F) – but very chilly again by night.’

He added: ‘I think most people would settle for things being cold and clear, rather than being wet and windy. It is a bit unusual for things to be just as chilly as this in November, though we did have a cold spell this time last year.’

Cold as things are, temperatures are not likely to threaten the 2019 low recorded at Braemar, Aberdeenshire, on February 1, when it got down to -15.4C (4.3F).

Traffic Scotland warned drivers of dangerous conditions caused by low temperatures. A further motoring peril at this time of year is created by the sun being so low in the sky, which can often dazzle motorists. 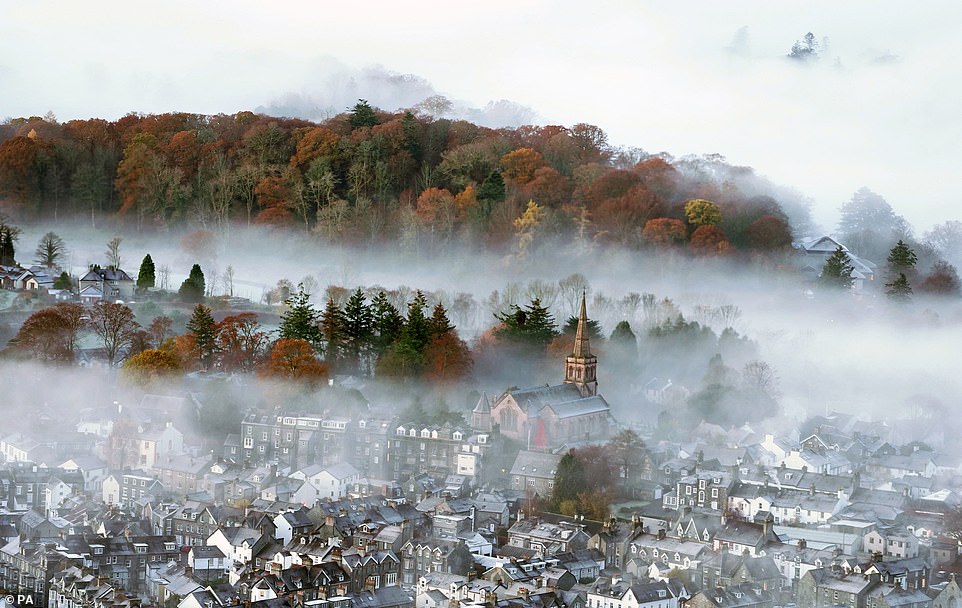 Keswick today. The Met Office said tonight would be cold and frosty and could be the coldest night across the UK as a whole 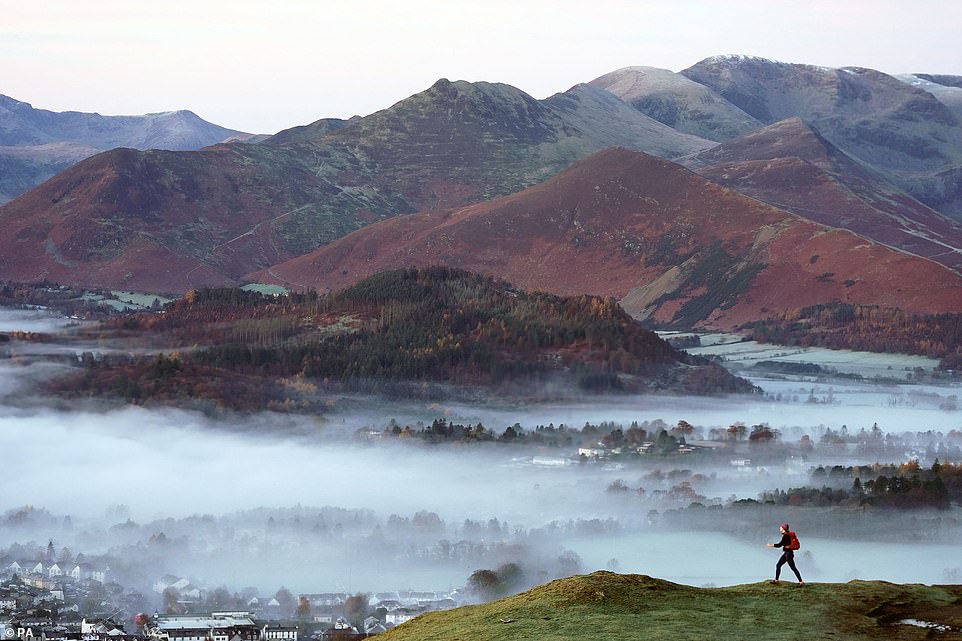 Keswick today. The Met Office the current cold spell may soon come to an end, with temperatures recovering this week 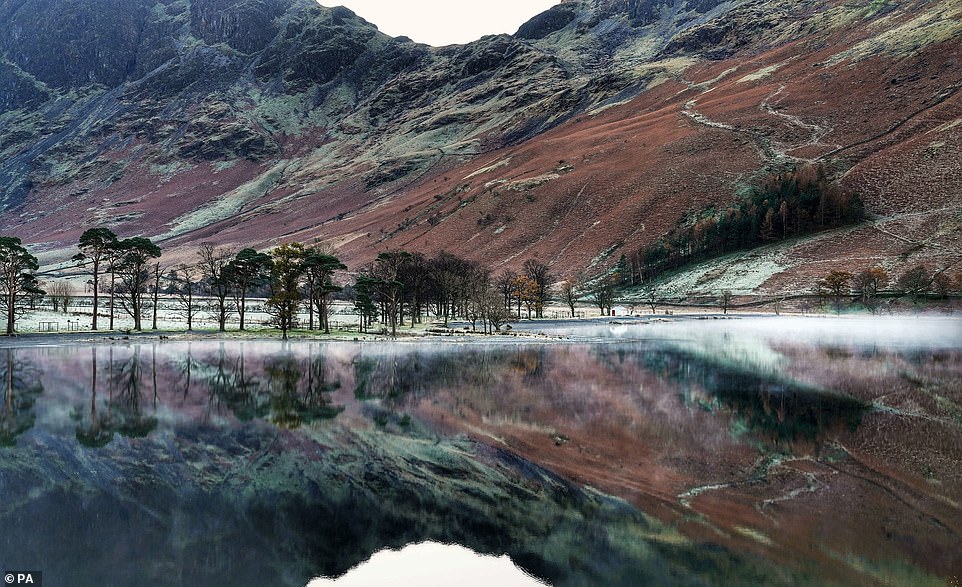 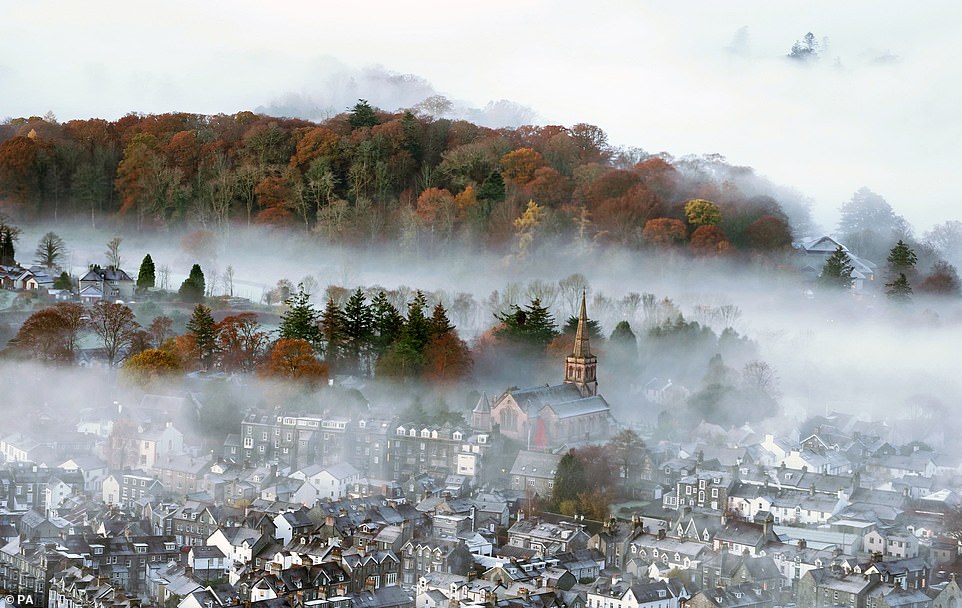 The government agency also suggested packing the boot with an ice scraper, de-icer, shovel, warm clothes, boots and food and drink to prepare for worsening conditions.

Dr Emer O’Connell, consultant in public health at Public Health England, said: ‘Older people and those with heart and lung problems are at risk of getting sick in cold weather.

‘Keep an eye out for those who may need help staying warm, ensure they wear lots of thin layers and have everything they need.

‘Below 18C, changes to the body mean that the risk of strokes, heart attacks and chest infections increase so heating homes to this temperature is particularly important to stay well.’

Met Office Chief Meteorologist, Steve Ramsdale, said: ‘After a very wet period for parts of the UK the weather is now turning much quieter for a few days.

‘With these quieter conditions night time temperatures will fall away with more widespread frosts than seen recently despite daytime temperatures remaining fairly similar. Tuesday morning in particular looks to be cold across much of England.’ 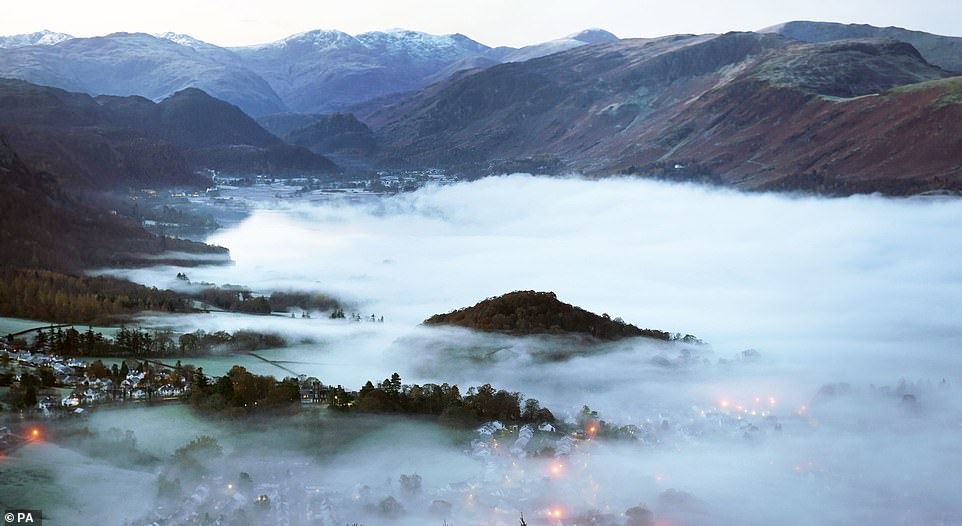 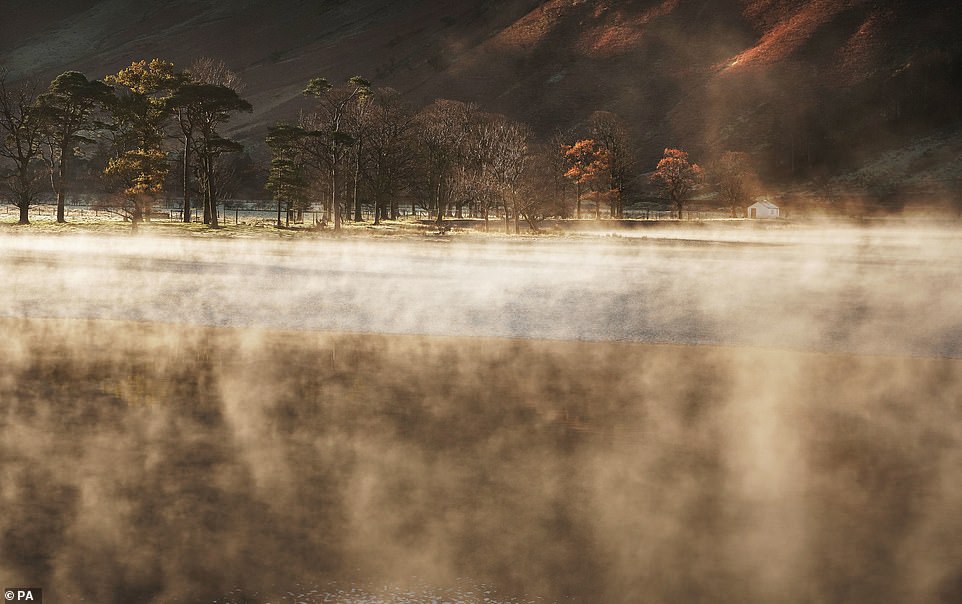 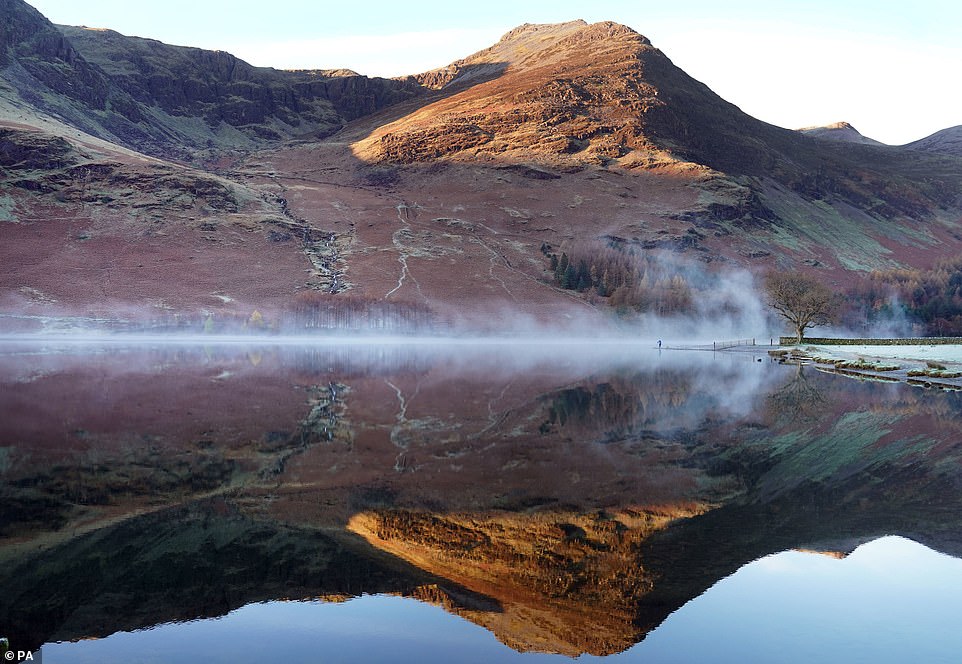 Looking ahead, the Met Office ‘contingency planning’ forecast has the three months of November, December and January being potentially wetter than average.

Things are expected to turn unsettled during the end of this month and the start of December.

The forecast up to the middle of December expects drier weather to take charge before things break down again for the second half of the festive month.

Mr Burkhill said: ‘This could end with a period of sleet or snow, but only for the higher ground.’ A white Christmas, it appears, is a long way off.

Meanwhile large parts of the country remain mired in floods as experts warn the chaos could continue until tomorrow.

The rivers Severn and Avon have burst their banks leaving properties waterlogged in Gloucestershire and Worcestershire, while residents in the Midlands and Yorkshire are still battling to clear their homes. 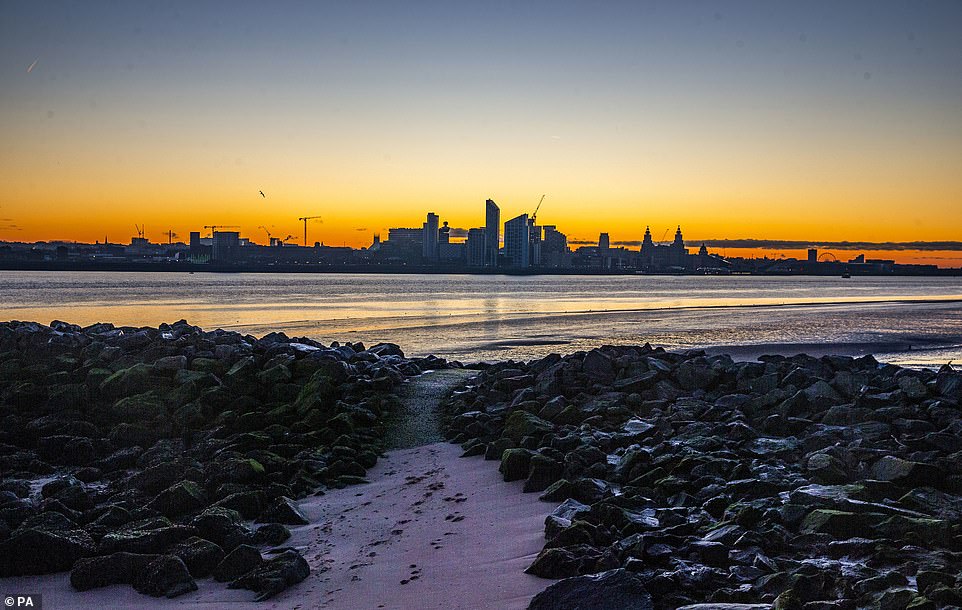 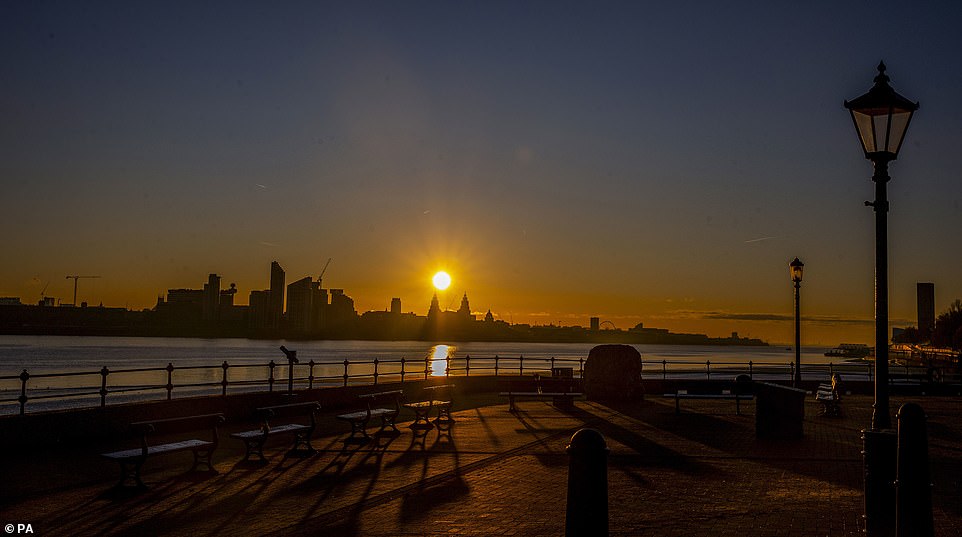 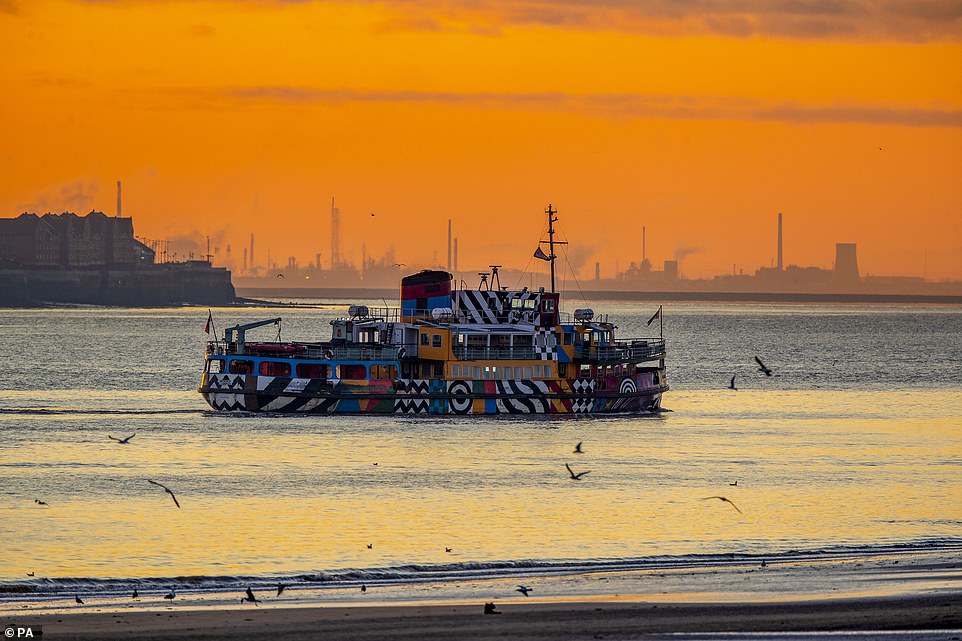 The sun rises over Dazzle, the painted Mersey Ferry in Liverpool, at sunrise this morning 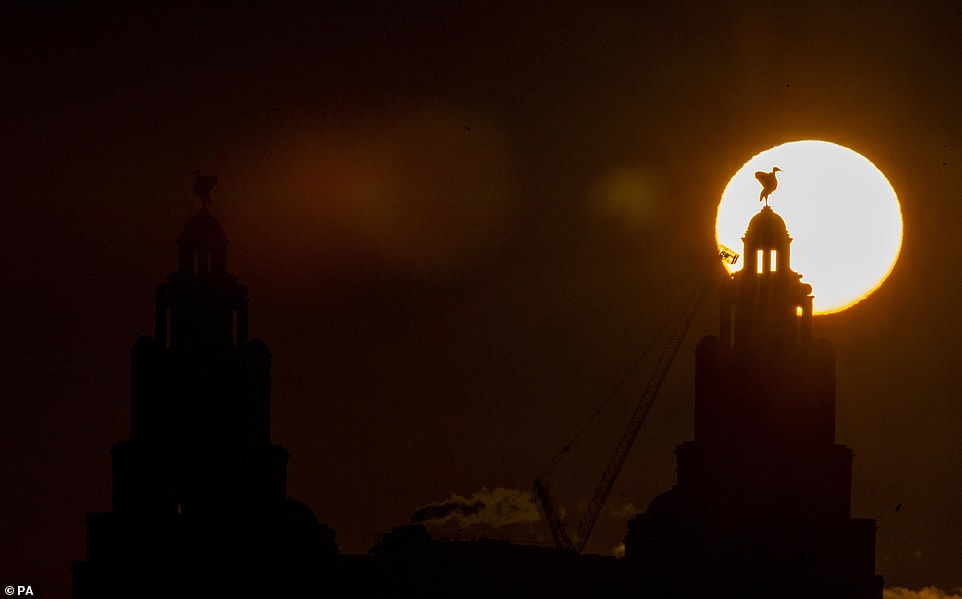 But despite some areas enduring their ‘wettest ever autumns’, much-needed relief from heavy rainfall has been forecast for flood-hit areas in the coming days.

Although river levels in some areas remain high, the Met Office said it has not issued any weather warnings as drier weather approaches.

Meteorologist Sophie Yeomans said: ‘There is some rainfall around, but it’s looking light and patchy. Sunday has the highest risk of rainfall, but the start of next week is looking quite dry.

‘There’s light cloud and rain around in some of the areas in the north of England and also down in Shropshire and the West Midlands. But there’s no long-lasting or heavy rain – it’s a good situation.’

In a forecast of the flooding risk in England and Wales, the Environment Agency said: ‘River flooding is expected to continue in the Lower River Don washlands area in South Yorkshire through to at least Tuesday, where properties will continue to flood and there will be continued travel disruption.’

Communities in parts of central and northern England continued the clean-up after being overwhelmed with water following torrential rain in recent days. 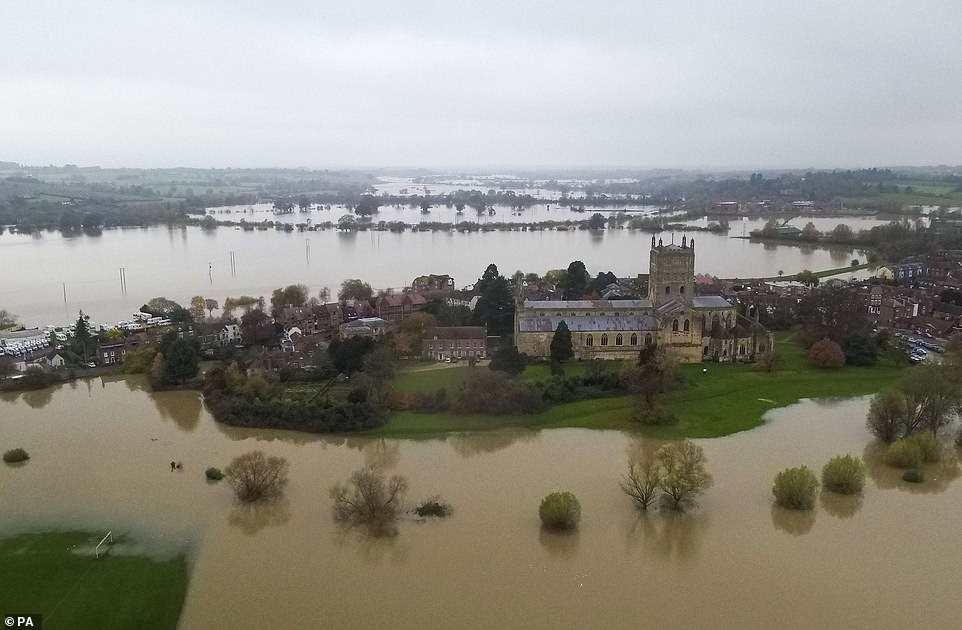 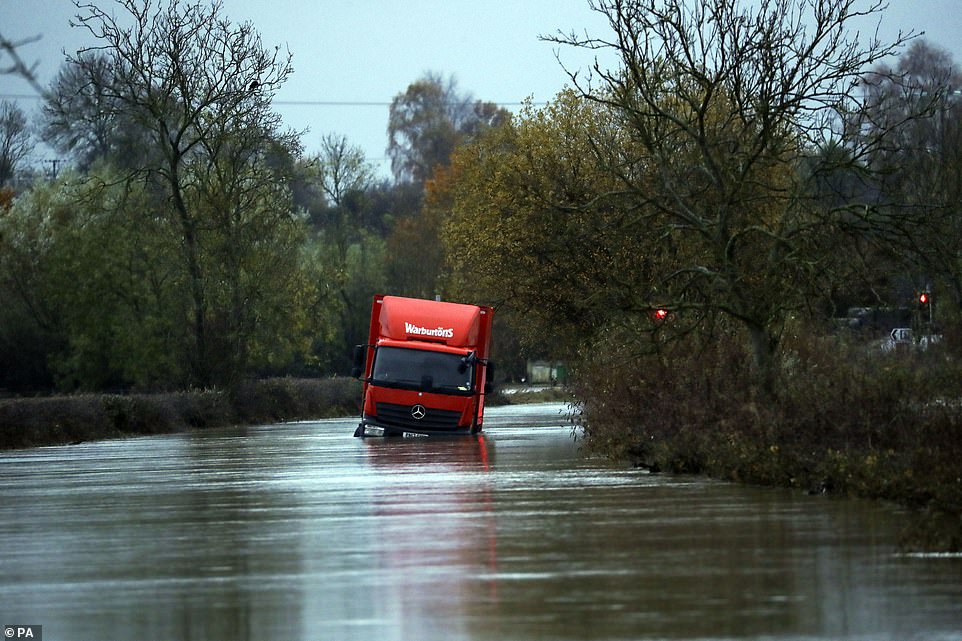 A lorry is stranded on a flooded road yesterday near Eckington, Worcestershire, following heavy rain 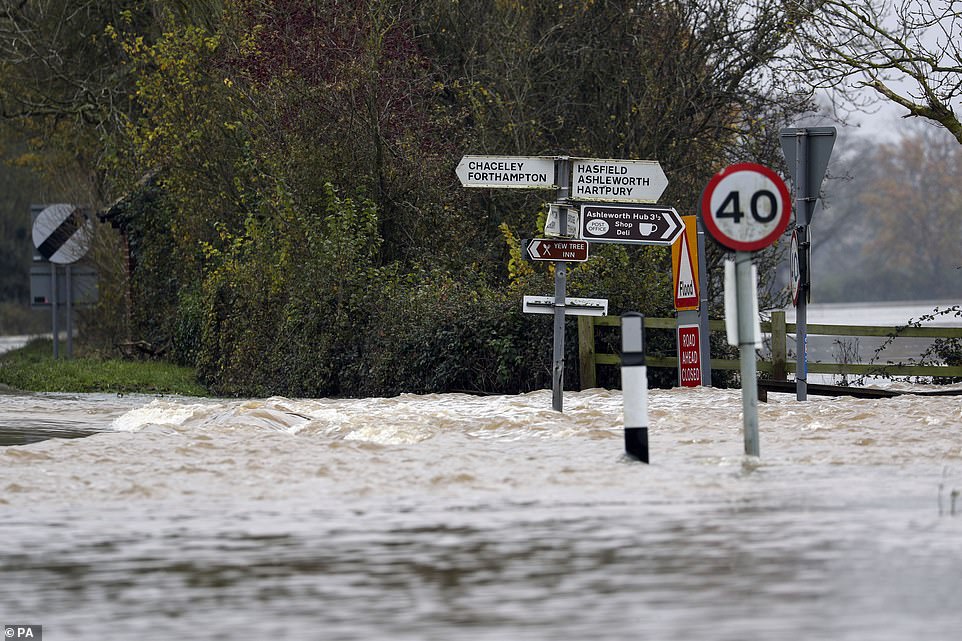 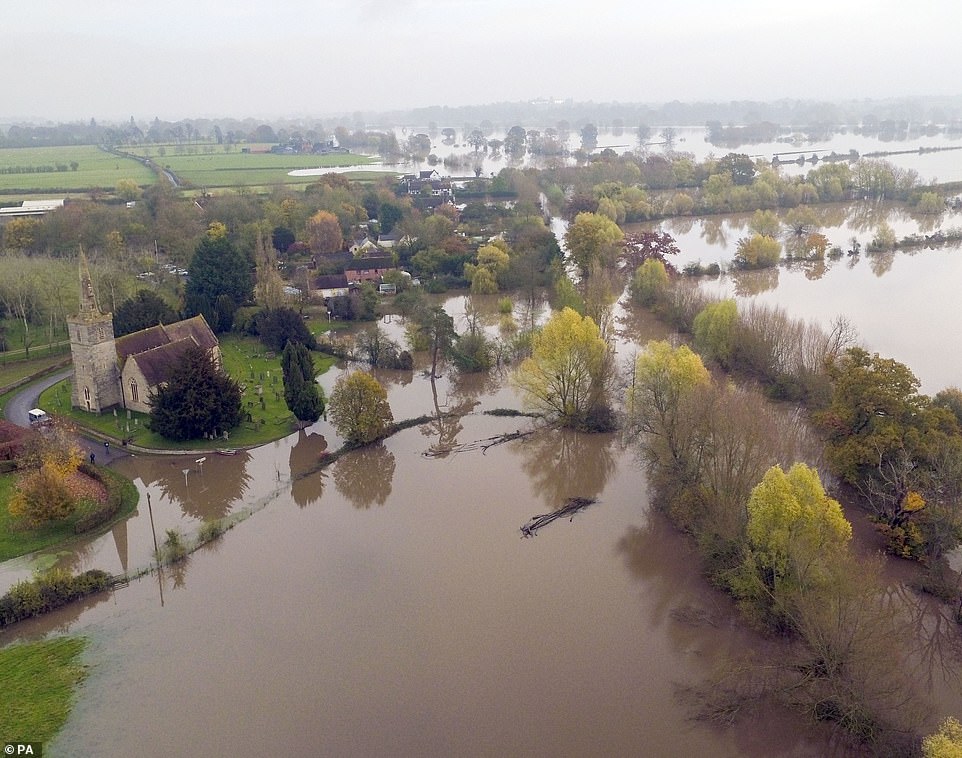 The EA for Yorkshire and the North East said there is still lots of flood water in the region, and a pumping operation is under way to reduce water levels.

In an online message, Martin Christmas of the EA, said: ‘We are starting to think about moving from emergency rescue response into recovery and that means looking at our flood warnings and then starting to think about all the inspections we need to do to look at potential repairs for banks and flood assets based on the loading they have received from the water in the last week.

‘We have still got tens of people out there in the field carrying on with pumping activity trying to get levels at Fishlake reduced and we are also keeping an eye on East Yorkshire as well.’

The Met Office said its Sheffield weather station has recorded its wettest ever autumn.