British Airways in battle for ‘survival’ over coronavirus: BA boss says the economic impact will be ‘more serious than the financial crisis, SARS or 9/11’

British Airways today revealed coronavirus is threatening its very survival as staff were told there will be job cuts and aircrafts must be mothballed because of the ‘worsening’ worldwide pandemic.

Chief Executive Alex Cruz has written to all 45,000 workers saying the virus’ relentless spread is a crisis ‘of global proportions like no other we have known’, more serious than the 2008 financial crash, SARS or 9/11.

Mr Cruz warned people would be put out of work and planes would be grounded ‘like we’ve never had to do before’ and urged: ‘Please do not underestimate the seriousness of this for our company’ in a message entitled ‘the survival of British Airways’.

Yesterday Norwegian Air said it would lay off around half of its 11,000 staff and cancel 4,000 flights as it struggles to stay afloat – but BA has yet to say how many workers they will let go.

Mr Cruz claims that BA, which along with Iberia and Aer Lingus is owned by the IAG Group, is more resilient ‘than ever before’ – but the airline was under ‘immense pressure’ and would ‘have to react fast and definitively in response to the worsening situation’, he said.

His letter to staff was leaked this afternoon – but despite the bad news it contained shares in BA’s parent company jumped upwards five per cent this afternoon as investors reacted positively to news that the airline would be cutting costs. Although IAG’s stock price has fallen by 42 per cent in the last month.

The world’s airlines are ‘switching to survival mode’ as the travel industry buckles under the weight of the coronavirus outbreak – just eight days since the collapse of British regional carrier Flybe who also blamed coronavirus for its demise.

Heathrow also saw a 4.8 per cent year-on-year decline in passenger numbers in February due to coronavirus, it has also emerged, with airport terminals across the UK exceptionally empty today. 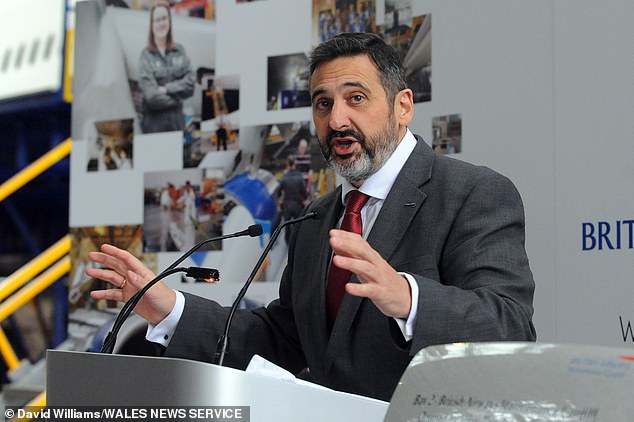 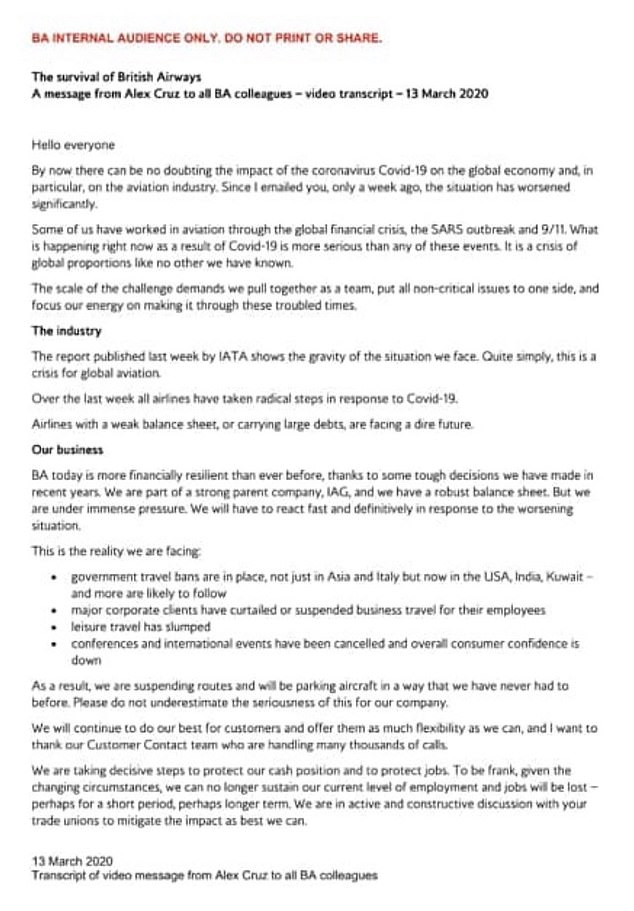 Mr Cruz has sent a message to 45,000 staff entitled ‘the survival of British Airways’ where he revealed there would be job cuts 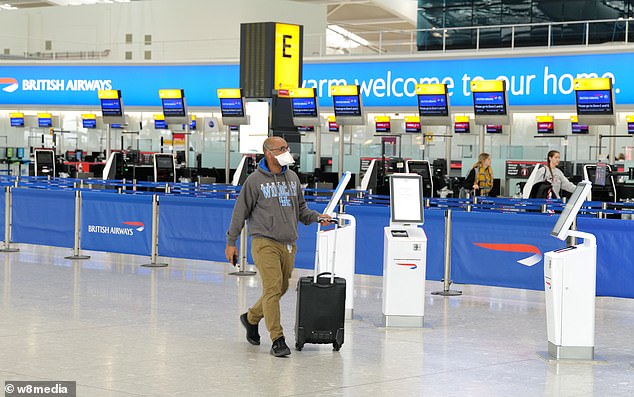 The British Airline Pilots Association (BALPA) today the Government must act immediately to support the UK airline industry, which is creaking under the pressure of the effects of coronavirus.

Summer booking are significantly down, and as a result, airlines are scaling back operations and asking employees to take unpaid leave, freezing and pay and considering redundancies.

BA has already been forced to cancel flights to mainland China, Italy and Spain to stop the spread – as have Ryanair, easyJet and other major carriers.

Airlines around the globe are cutting flights and costs amid plunging demand with experts saying they will collectively lose $130billion this year.

As a result, jobs would be lost ‘perhaps for a short period, perhaps longer term’ and the company was in discussions with trade unions, Cruz added.

Aircraft would be grounded in a way that the airline has never had to do before, he said.

A spokesman for BA, which is based at Heathrow in London, declined to comment when asked how many jobs could go among its 45,000-strong workforce. 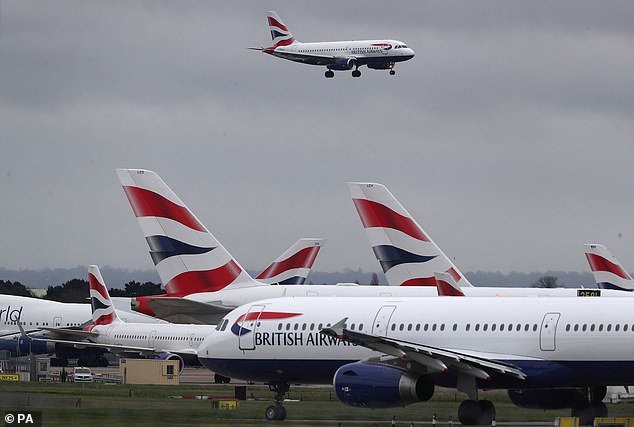 British Airways aircraft would be grounded in a way that the airline has never had to do before, 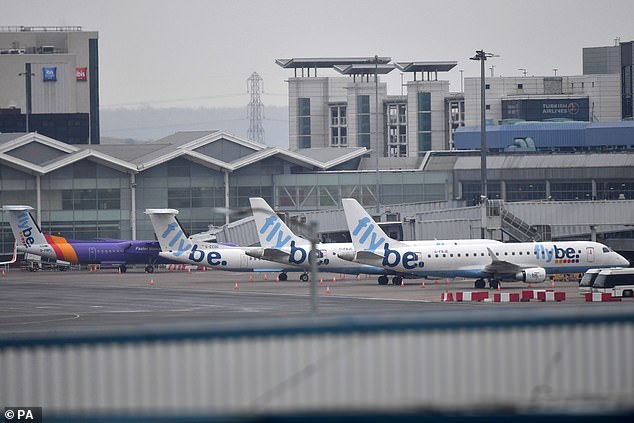 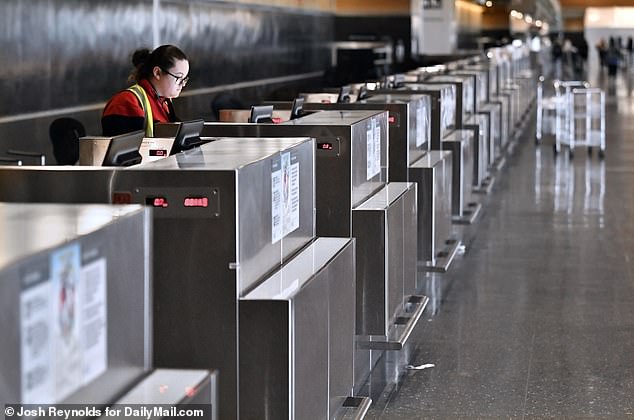 Today new British government advice warned against all but essential travel to parts of Spain.

This will will further hurt BA, which has 17 flights to Madrid daily, plus dozens to other Spanish cities.

WHO WILL BE BANNED FROM ENTERING THE US?

US President Donald Trump said any foreign citizens who have been to a country in the European Schengen zone within the past two weeks will not be allowed to enter the United States.

US citizens, their immediate family members, and people who are legal permanent residents are not included in the ban and will still be allowed into the country.

People travelling from the UK will be able to fly into the US as usual – as long as they haven’t been to an EU country – because Britain is not in the free movement area.

Americans who are travelling back from the affected areas will be funnelled through select airports where they will go through ‘enhanced screening procedures’.

WHAT WILL HAPPEN TO PEOPLE WHO FALL FOUL OF THE RULE?

The travel ban will come into force today, Friday March 13

Anyone who decides to travel in violation of the new law is expected to be turned away at either their departure airport or at the US border when they land.

It is not known whether the US will quarantine people who demand to enter the US or simply force them to fly home.

The Department of Homeland Security said it will issue more details about how the rule will be enforced by Friday.

But despite the gloomy news for staff, shares in IAG traded up 8 per cent to 355.8 pence in the hour after Cruz’s warning over jobs, paring gains of as much as 14% earlier in the session.

US President Donald Trump’s shock decision to impose a 30-day ban on flights from Europe means the industry is facing a crisis ‘bigger than the airspace closure after 9/11 and the Icelandic volcano groundings’, according to consultant John Strickland.

It will badly disrupt transatlantic traffic that is key to the earnings of major European companies, analysts warned, as the move hit stocks that have already been some of the worst affected the outbreak.

Norwegian lost a fifth of its value after announcing the string of emergency measures.

It said the changes would apply until the end of May – but warned that the numbers could increase further.

The cancellations amount to around 40pc of its long-haul schedule and a quarter of its short-haul flights.

Chief executive Jacob Schram said it was ‘an unprecedented situation’. Norwegian was already struggling under the weight of a mammoth debt pile.

Tui, the world’s largest tour operator, said it would freeze payments and suspend contracts with some hotels due to a collapse in demand.

Hays Travel, which bought 550 Thomas Cook stores in January, asked staff to take unpaid leave due to the slump in demand in the travel industry.

The Sunderland firm employs more than 5,000 people and is the country’s largest independent travel agents.

The warnings came as shares on the London Stock Exchange dived more than a tenth – the second worst day in its history as the impact started to affect jobs.

Prime Minister Boris Johnson said as many as 10,000 people could be infected in the UK, and urged anyone with a persistent cough or high temperature to self-isolate for seven days.

Businesses are facing up to a period of many months when families will stay indoors, rather than heading out to spend their money.

The change will put a huge strain on shops, bars, restaurants and other leisure businesses such as cinemas, music venues and sports venues.

President Donald Trump banned air travel from mainland Europe to the US for 30 days battering the airline industry.

The International Air Transport Association, which represents airlines around the world, has predicted the industry could lose £88billion of sales in 2020.

WH Smith, have also been affected by the travel chaos, halved their expectations for the year and predicted their sales would take a £130million coronavirus hit.

The Budget on Wednesday put £7billion of emergency measures in place to protect businesses starved of cash during the ‘delay’ stage of the virus. There were guarantees for loans, a business rates holiday, and freezes on duties on beer, wine and spirits. 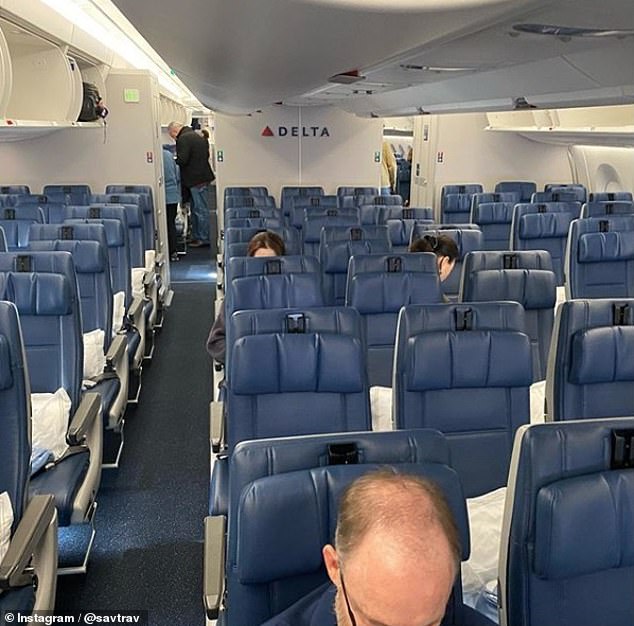 The coronavirus pandemic is putting up to 50 MILLION travel and tourism jobs at risk, with BA warning it will lay off staff and ground aircraft

Up to 50 million jobs in the travel and tourism sector are at risk due to the global Covid-19 pandemic, according to the World Travel & Tourism Council (WTTC), and BA is warning that it will cut jobs and ground aircraft.

The latest figures from the WTTC, which represents the global travel and tourism private sector, show that global travel could be adversely impacted by up to 25 per cent in 2020.

This is the equivalent to a loss of three months of global travel, which could lead to a corresponding reduction in jobs of between 12 and 14 per cent. 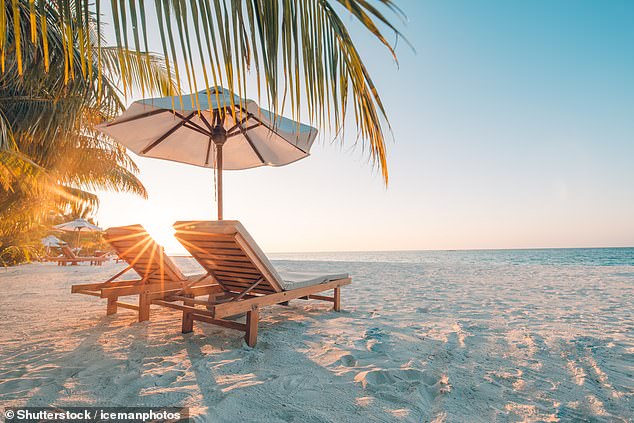 Gloria Guevara, WTTC President & CEO, said: ‘WTTC figures show the stark impact on the travel and tourism sector of the present Covid-19 outbreak, with analysis now suggesting that up to 50 million jobs are at risk in the sector globally.

‘When the time is right, WTTC and the global private sector will be ready to help and support the government and countries to recover.

‘The Covid-19 outbreak clearly presents a significant threat to the industry as a whole, to those employed within it, and those wishing to continue travelling.

‘Travel and tourism has the strength to overcome this challenge and will emerge stronger and more robust by taking all necessary measures to tackle Covid-19 and the understandable concern which surrounds it.’

The WTTC, which is headquartered in London, is calling for a series of measures to be taken to enable the swift recovery of the sector once Covid-19 is under control. 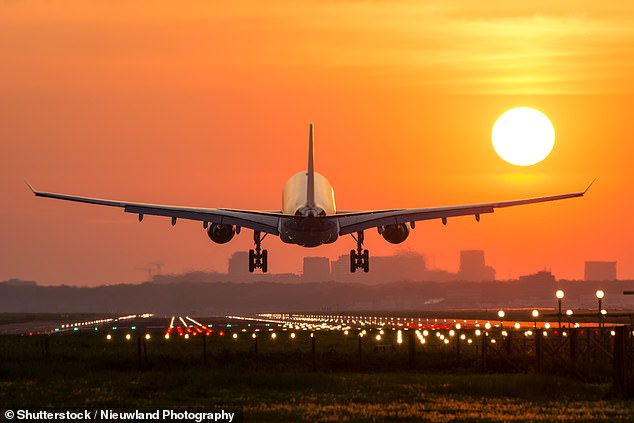 These include the removal or simplification of visas, the lifting of the 80-20 ‘use it or lose it’ airport slot rule for airlines, the reduction or elimination of travellers’ taxes and support for hard-hit destinations, such as cash-injections for marketing campaigns.

As the WTTC released its figures, BA’s CEO Alex Cruz told staff in a global message seen by Reuters that the airline will ground aircraft like never before and lay off staff due to coronavirus, in a battle by the company to tackle what he called the most serious crisis in aviation history.

‘It is a crisis of global proportions like no other we have known,’ he wrote. ‘Please do not underestimate the seriousness of this for our company.’

Cruz told staff in the message that jobs would be lost ‘perhaps for a short period, perhaps longer term’ and that the company was in discussions with trade unions.

It led to several countries being effectively put into lockdown as they closed schools, mass events and shops, while in the US, the mayor of New York declared a state of emergency in the city.