British pilot is hailed a hero after taking the controls of stricken aircraft, crash-landing on South African mountain and carrying a passenger three miles despite suffering fatal burn injuries

A British pilot died a hero saving the lives of four people after taking over the controls of a stricken aircraft and crash landing it on a mountain top after it flew into thick cloud.

Experienced David Goodwin, 59, was sat beside his partner Michelle Tilley who was flying the plane which also had her two sisters and her teen nephew on board as passengers.

They were returning from a three-day flying safari spotting game in the African bush to attend a funeral service for the mother of the three sisters who recently passed away. 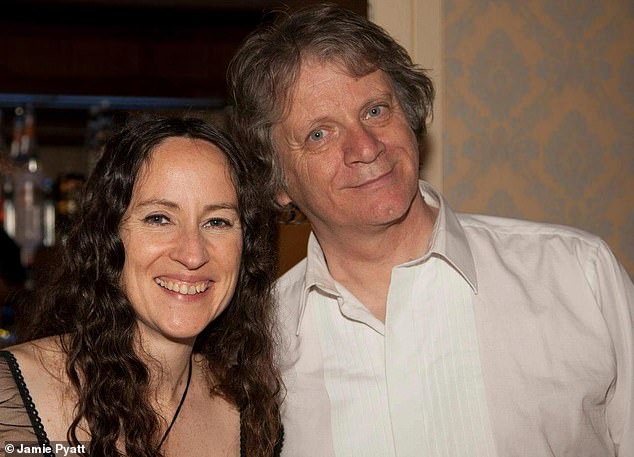 David Goodwin, 59, suffered fatal 95 per cent burns pulling partner Michelle Tilley (pictured together), her two sisters and nephew from the blazing wreckage after the crash landing, before leading them three miles through wilderness to a safety 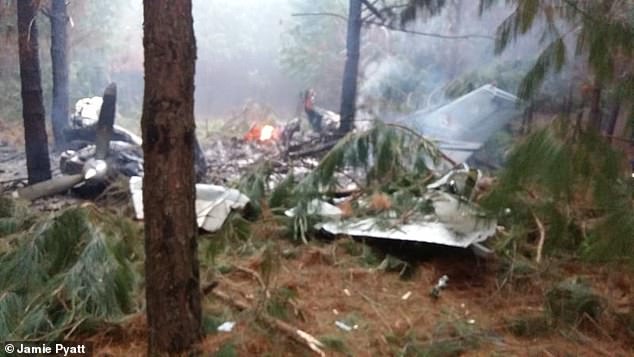 Three of the group including David and two of the sisters had travelled to South Africa to meet up with the third sister and her nephew to say a final farewell to their late mum.

But as they flew back to the airfield in Pretoria, South Africa, the day before the church service their plane crashed into a mountain side and turned into a blazing fireball.

Local pilots believe Michelle had tried to fly underneath the thick rolling clouds using valleys between the mountains in a dangerous race back not to miss the family funeral the next day.

The practice is known by pilots as ‘scud running’ which is flying by what you can see visually and not using instruments but can be very dangerous. 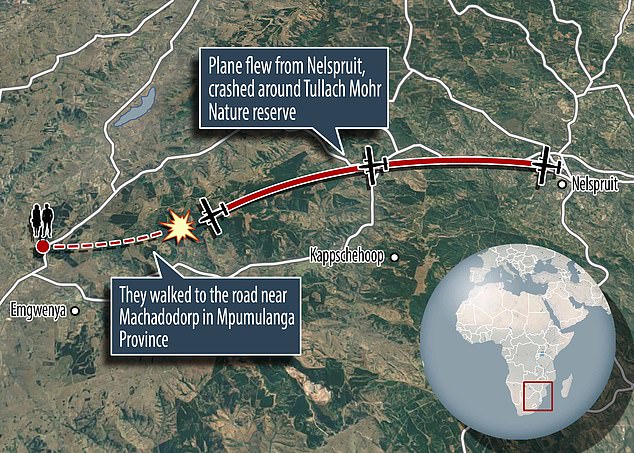 The crash landing took place in the mountainous terrain of the Tullach Mohr nature reserve in Mpumalanga province on a flight from Nelspruit to Pretoria’s Wonderboom airfield. He led thefour other passengers down the mountain to safety, carrying his partner’s sister

Half an hour after take off as they approached a mountain range they hit thick cloud and strong winds and rain but as it closed round them they had no way of turning back and had to press on.

Much more experienced pilot David, who was not qualified to fly in South Africa, took over the control of the aircraft and pulled back hard and went to full throttle to try and climb to safety.

But with incredible bad luck he hit a pine forest near the peak of the 6,305 ft high mountain range and ended up just 50 feet and a matter of seconds from safely clearing the jagged rock summit.

Survivors told how the plane was brought to a complete standstill in the tree tops which had slowed it down – and how it then dropped vertically to the forest floor and caught fire. 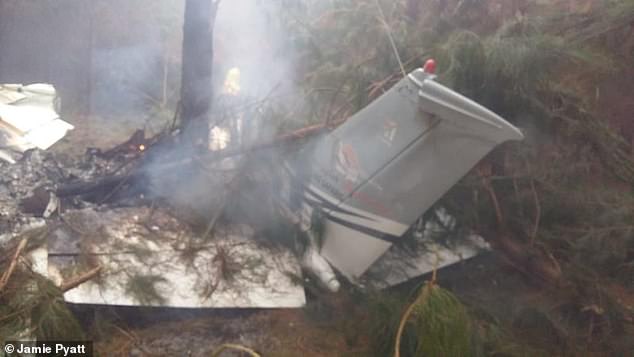 Although able to save himself, David undid his safety harness but stayed in his cockpit seat although enveloped in flames to helped all four on board escape before jumping clear.

In doing so he suffered 95 per cent burns and his clothes were burned off him but he gathered up the survivors and pulled them away before the plane exploded in a huge ball of flames.

He then marched the group in agony nearly 3 miles to a road near Machadodorp in Mpumulanga Province where he waved down a farm truck who summoned the emergency services.

Tragically air crash hero Mr Goodwin died from severe burns in hospital the following day despite a desperate battle to save him by surgeons. 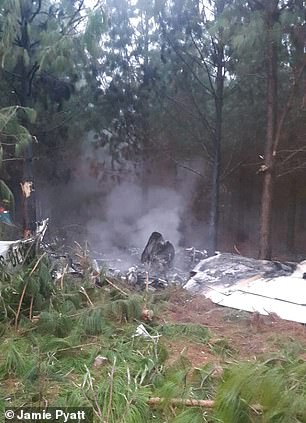 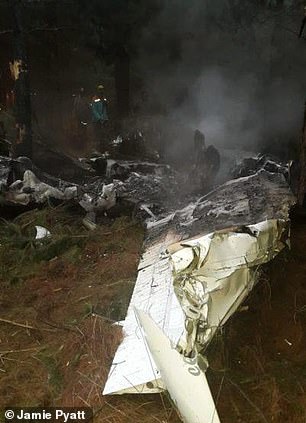 Both David and Michelle were fully qualified UK pilots and were skydivers who had completed hundreds of parachute jumps together.

David’s nephew Jamie told Skydive Mag: ‘He angled the plane crash so he would take the most impact then made sure everyone got out of the plane before he did despite being engulfed in flames.

‘Regardless of sustaining such terrible burns and being stripped naked by the flames he gave everyone the strength to keep moving and to get away before the craft explode and stayed strong.

‘He even carried Michelle’s sister who couldn’t walk for two to three miles to get to the road.

‘He saved the lives of all of her family and took the worst of the damage. He flagged down help and stayed incredibly strong until he knew everyone was safe. Incredible, incredible man.

‘Four people owe him their lives and so many more are thankful for that’ he said, 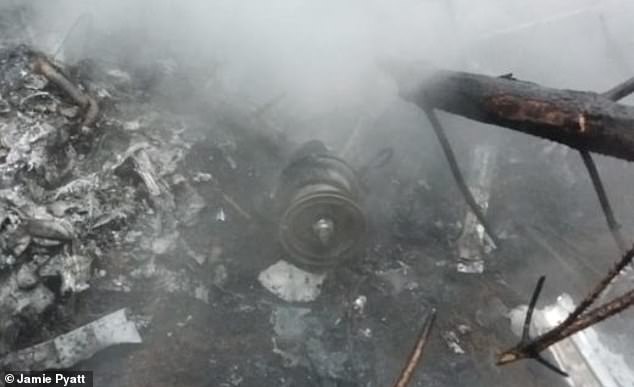 David had taken his partner Michelle and her sister Charlene out to South Africa from the UK to meet up with their third sister Tanya Collins to attend the funeral service for their late mother.

They decided on taking an air safari with Tanya’s son Ryan, 17, to remember and visit some of the mothers favourite places in the African bush.

But 50 miles after taking off from Nelspruit on the 300 mile journey back they encountered thick cloud and driving rain and high winds. 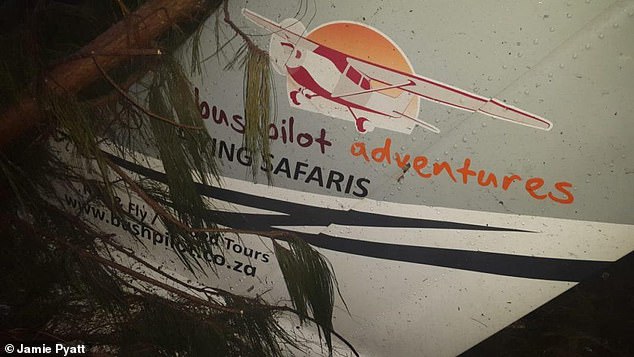 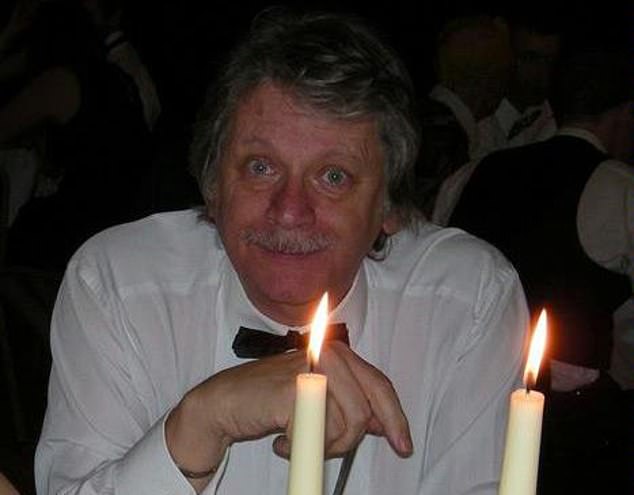 ‘Stubborn strength’: South African professional pilots said the other passengers would have perished in the flames but for Mr Goodwin’s heroism.

The owner of the plane from Bushpilot Adventures who would only give his name as Markus spoke to pilot Michelle and one of her sisters in hospital to try and find out what happened.

He said they were flying in good visibility and then hit thick cloud and had no way of turning the aircraft round and had to press on.

Markus said: ‘The more experienced pilot took over and was pulling back on the controls on full power trying to climb as he knew they were in mountains to try and get over the peak.

‘He nearly made it – another 50 feet that is how close it was but somehow he brought it to a standstill in the treetops after slowing the forward speed and then it crashed down vertically.

‘It hit the forest floor and caught fire and although David was right in the midst of the flames he forcefully pulled everybody else out of the burning aircraft before he got himself out.

‘Despite his burns he managed to lead the group down the mountain egging them on until they found an old farm road and he then flagged down a passing truck who called emergency services.

‘David, I absolutely salute you. You ultimately sacrificed your life saving the others.

‘Without your flying in those final moments and without your stubborn strength to pull everyone out of the burning wreck of the plane far fewer of the occupants would have survived’ he said.

He revealed Ryan Collins, 17, had been discharged from hospital the next day.

Michelle is being treated in hospital in Middleburg for non-life threatening injuries and sisters Charlene Tilley and Tanya Collins are recovering in hospital in Witbank from burns and spinal injuries.

Mr Goodwin and partner Michelle are long serving members of the British Parachute Association and he piloted planes that dropped skydivers at his club Peterlee Parachute Centre in Durham.

An inquest docket has been opened following the tragic accident.

Mr Goodwin was born in the UK and sisters Michelle and Charlene are UK residents.