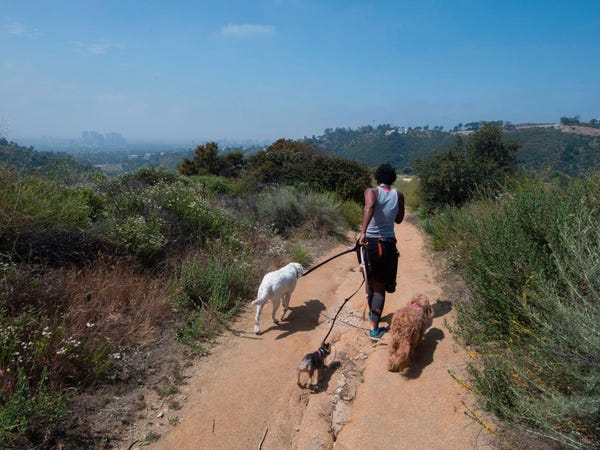 Authorities in California are urging residents to stay indoors and avoid hiking trails on Labor Day after a woman died while walking near Calabasas over the weekend.

The hiker, who has not been named by authorities, was trekking the Santa Monica Mountains with a friend on Saturday when she collapsed, as reported by NBC.

The cause of her death is currently unknown, as the Los Angeles County Sheriff's Deputy Juanita Navarro told the outlet, though foul play is not suspected.

As a result, trails along the Santa Monica Mountains have been shut down through Monday, according to a tweet from the Malibu Search and Rescue team.

"Effective immediately, we have been advised that all trails in the #SantaMonicaMountains will be closed through #LaborDay," the team wrote.

"We responded to several heat related rescues today, including one hiker who unfortunately perished. PLEASE DO NOT #HIKE IN THIS #HEATWAVE."

In another tweet on Sunday, the Malibu Search and Rescue team urged California residents, especially those with dogs, to stay in doors to protect themselves from excessive heat.

According to the National Weather Service, temperatures in California reached all-time highs this weekend. In Woodland Hills, for example, temperatures reached 121 degrees on Saturday, exceeding the previous record of 119 degrees set in 2006.

Despite the warnings, some people decided to venture out during the record-high temperatures this weekend.

According to the Malibu Search and Rescue team, a 22-year-old woman was carried off a beach on Saturday after losing consciousness.