‘We’re trapped!’: California’s wildfires double in size with tens of thousands forced to flee and many more stuck inside as satellite images show smoke blanketing the state that now has the worst air quality in the world

At least five people have died and two are missing after dozens of lightning-sparked California wildfires spread rapidly on Thursday, doubling in size in the state’s wine country alone while expanding by nearly a third near Palo Alto.

There are now 26 major fire incidents in the state, the largest raging to the north and south of the San Francisco Bay Area and affecting more than 350,000 acres in total.

Up to 62,000 people have now been forced to flee as shocking satellite images show how smoke from the massive blaze has drifted 600 miles into the Pacific Ocean.

Five fatalities were reported as of Thursday night as Governor Gavin Newsom asked for help from other states in fighting the flames back. At least two people were missing and 33 civilians and firefighters have been injured.

Ten of thousands evacuating to safety are trying to do so as the coronavirus pandemic still rages through the state and thick smoke creates dangerous breathing conditions.

Locals have described being ‘trapped’ between the pandemic and the flames heading toward them. Up to 100,000 more people may be forced to leave their homes if the fires can not be pushed back soon.

California’s air quality has become the worst in the world, according to CNN, having plummeted to ‘very unhealthy’ and ‘hazardous’ levels. 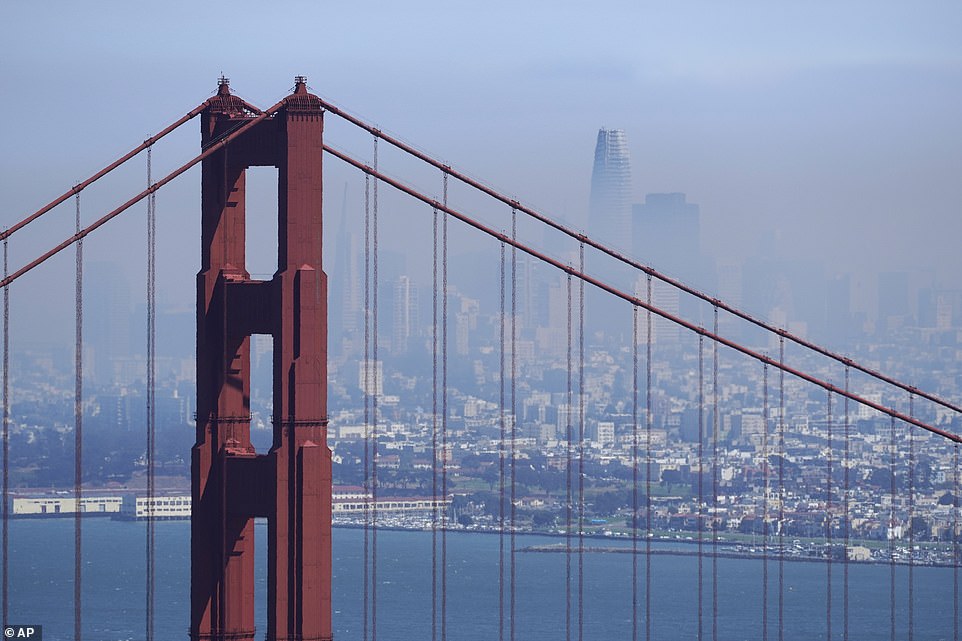 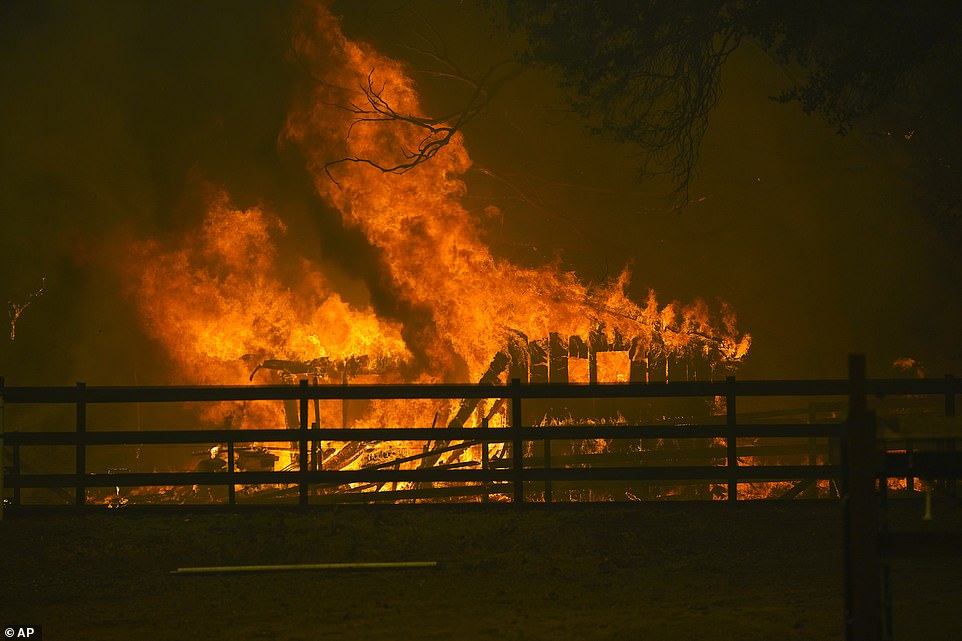 A structure is damaged by the CZU August Lightning Complex Fire in Santa Cruz County on Thursday. Evacuation orders were issued across the county Thursday evening as it was revealed there is zero percent containment on the fires in this zone 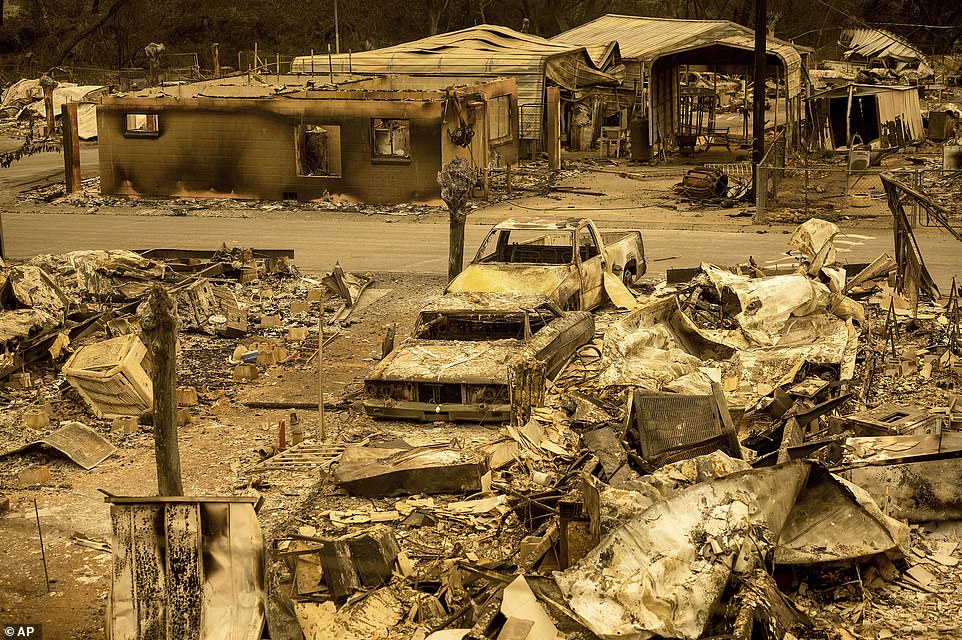 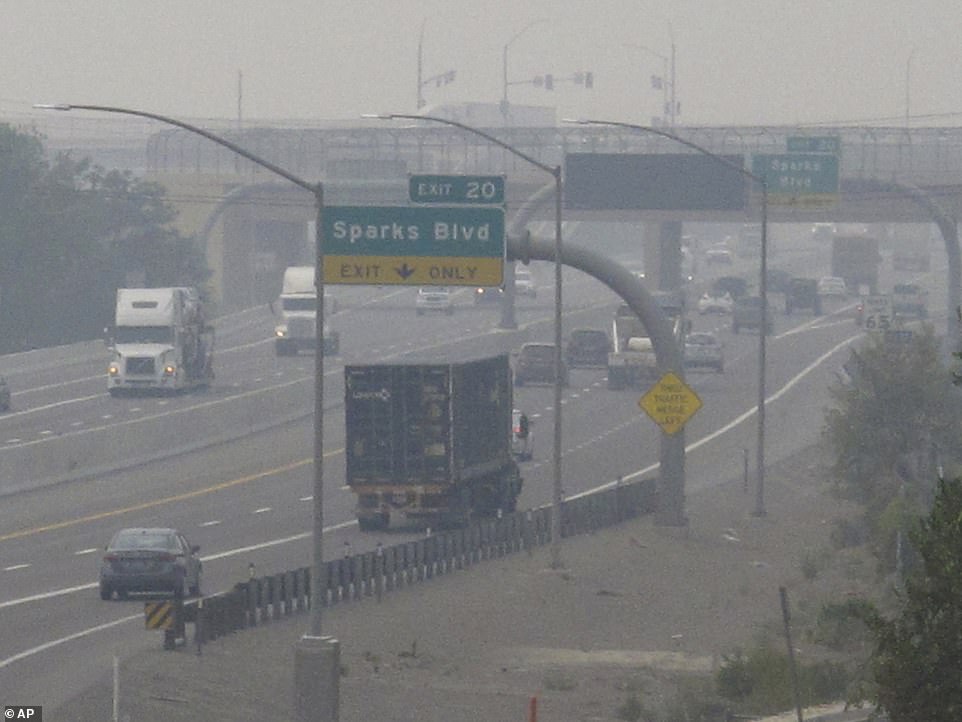 Smoke from California wildfires up to 200 miles away blankets an interstate in Sparks, Nevada 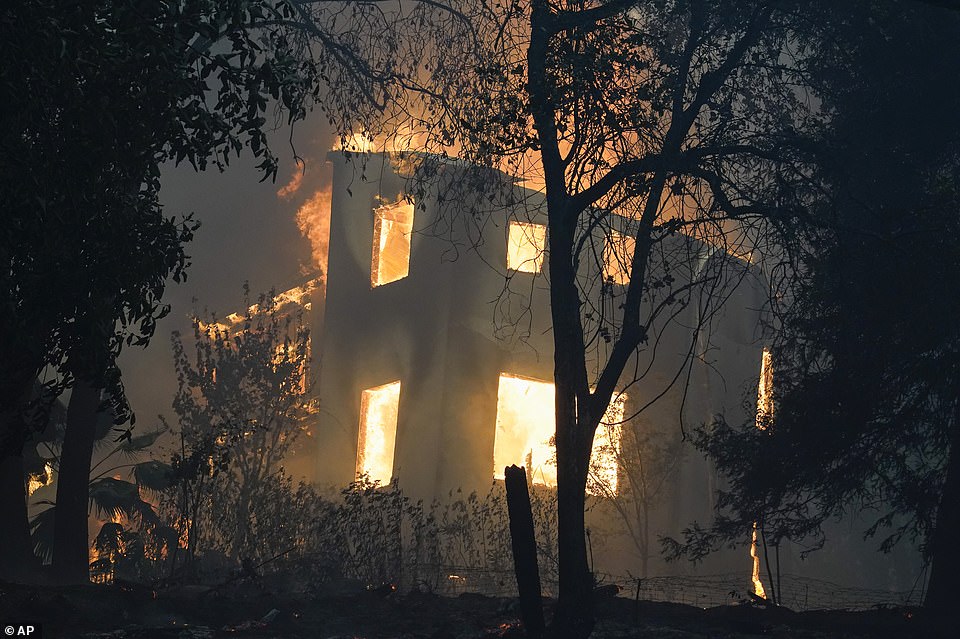 A home burns as the CZU August Lightning Complex Fire in Bonny Doon, California. Officials say that up to 200 structures may already have been destroyed in the arwa as the fires continue to grow in size and evacuations continue

‘We’re in a pandemic and a heat wave, and we don’t have air conditioning,’ Kena Hudson, whose young son has asthma, told CNBC.

‘We can’t open up the window, we’re trapped, we’re hot and no one can come over to play’.

California has been hit by its worst lightning storms in nearly two decades. Around 11,000 strikes ignited over 370 fires this week, fouling air quality for hundreds of miles and stretching firefighting resources to the limit, authorities said.

As the fire moved south, the University of California Santa Cruz called for voluntary evacuations from its campus on the northern flank of the coastal city. 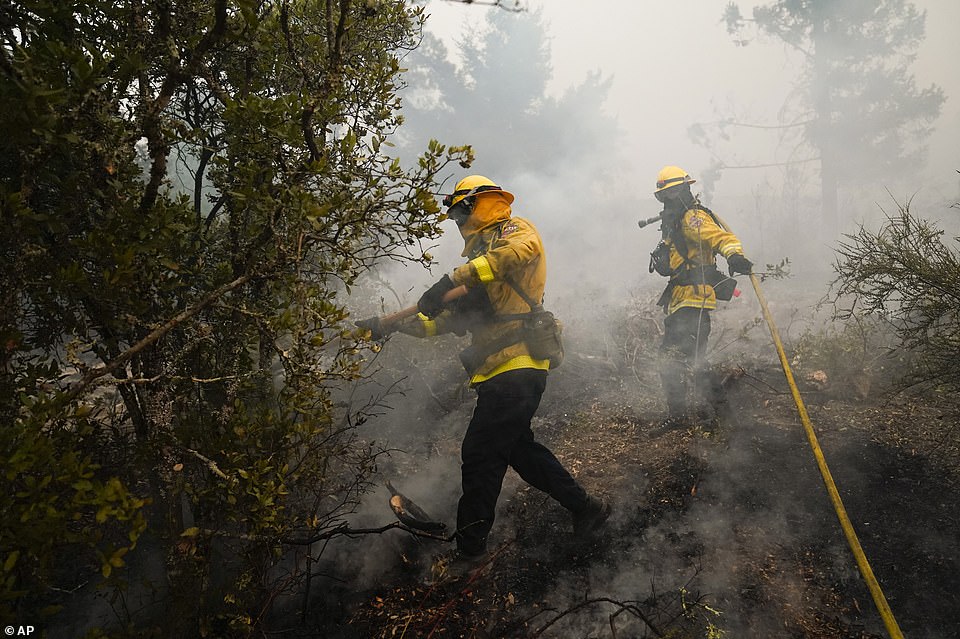 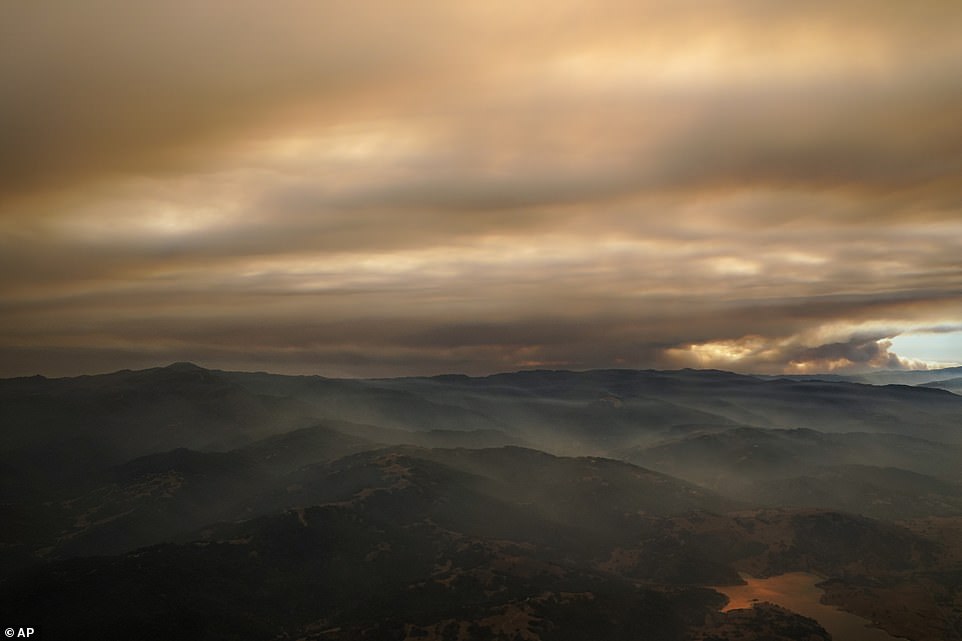 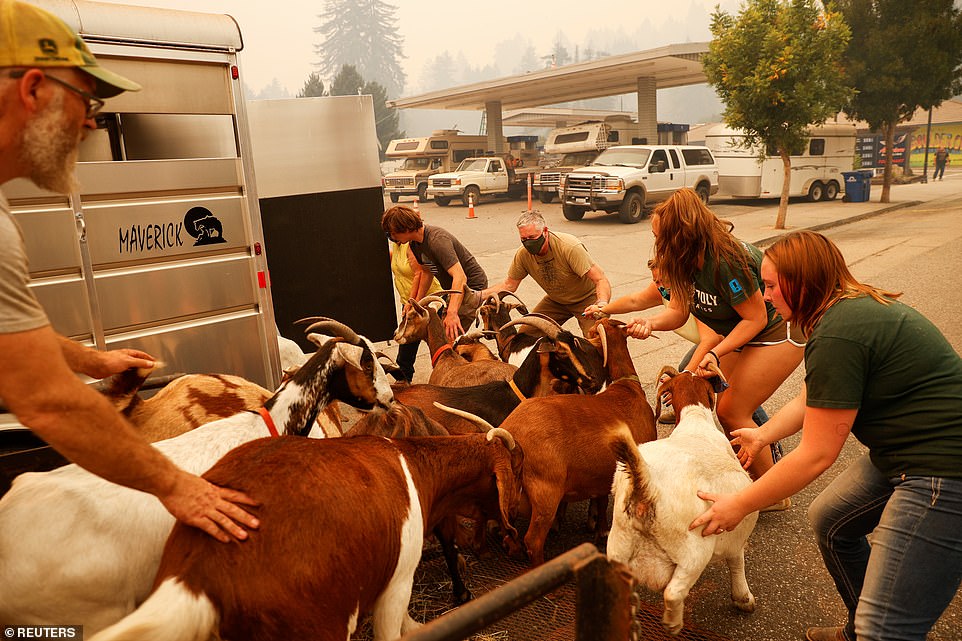 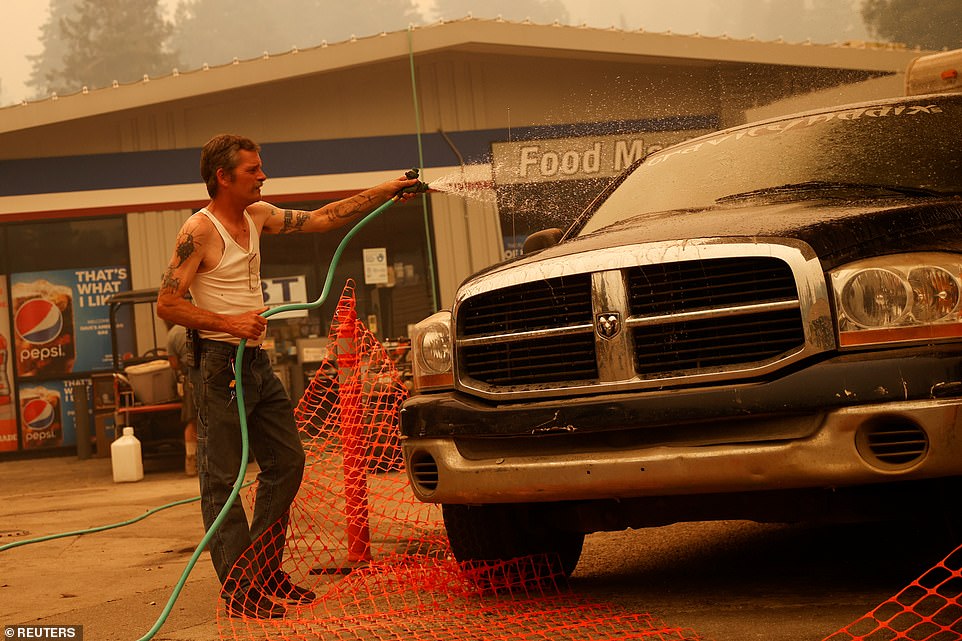 On Thursday evening, evacuation orders were expanded throughout Santa Cruz County which lies within the zone known as the CZU lightening complex.

There was zero percent containment on the fires in this zone as evacuations reached 50,000 people, 48,000 acres were confirmed burned, and 20,952 structures were threatened maid reports from officials that up to 200 have been destroyed.

To the north, at least nine fires raced through hills in California’s wine country about 35 miles southwest of Sacramento, destroying over 105 homes and other structures.

Collectively known as the LNU Complex Fire, they have doubled in size to 131,000 acres since Wednesday, forming a ‘megafire’ 10 times larger than New York’s Manhattan island.

‘It sucks, everything is gone,’ Nick Pike told CapRadio in Sacramento after he and three neighbors lost their homes near Vacaville.

A PG&E utility worker died on Wednesday helping first responders, the second fatality from fires after the death of a firefighting helicopter pilot in a crash.

On the Thursday afternoon, a third death, of a resident in Solano County, was reported by Sheriff Thomas A. Ferrara, although he didn’t have any additional details.

At least four civilians were injured in the LNU fire, according to Cal Fire. 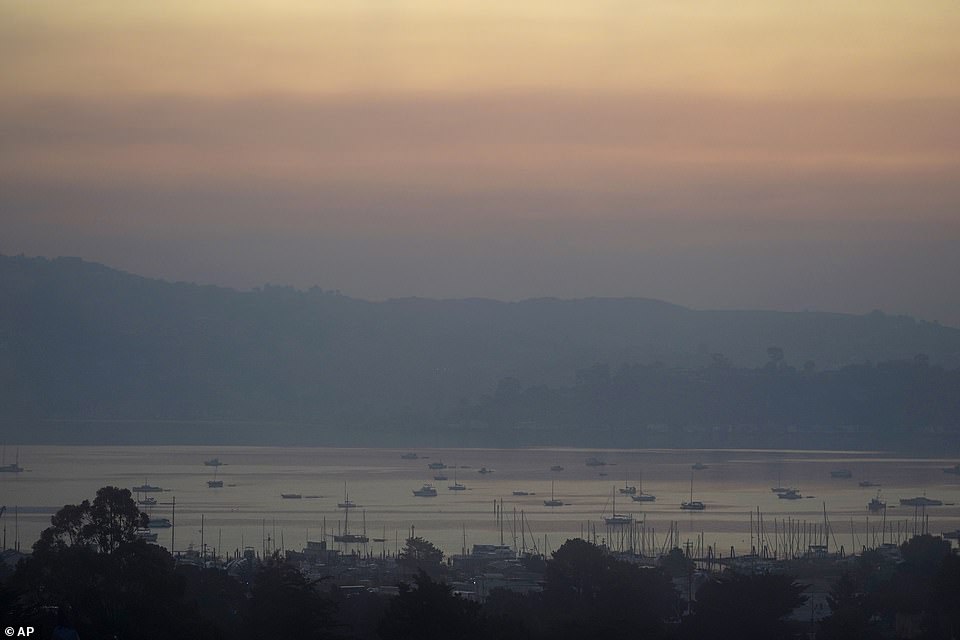 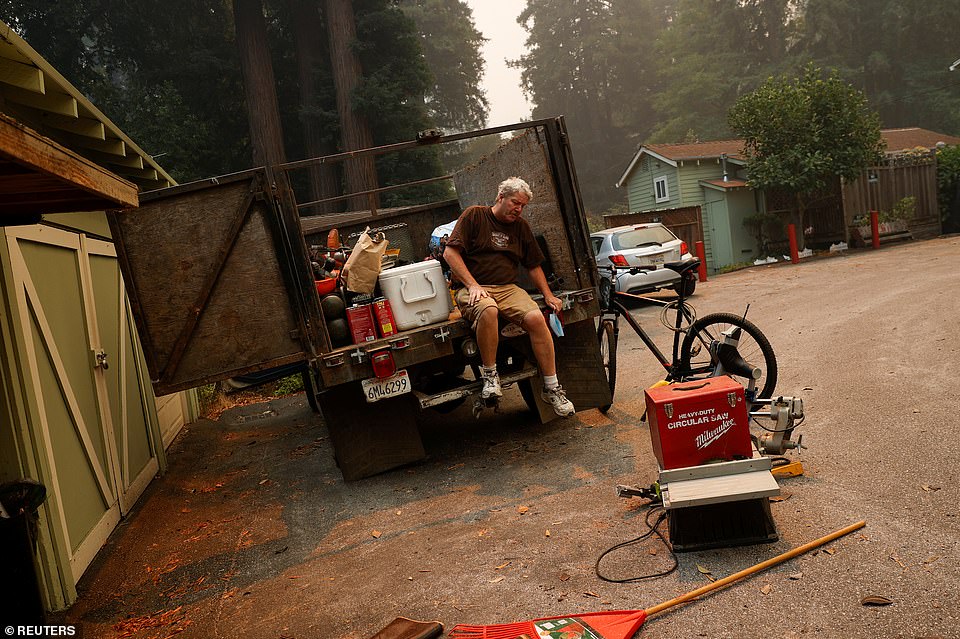 Michael Smith loads tools into his truck as he prepares to evacuate in Boulder Creek, California, on Thursday 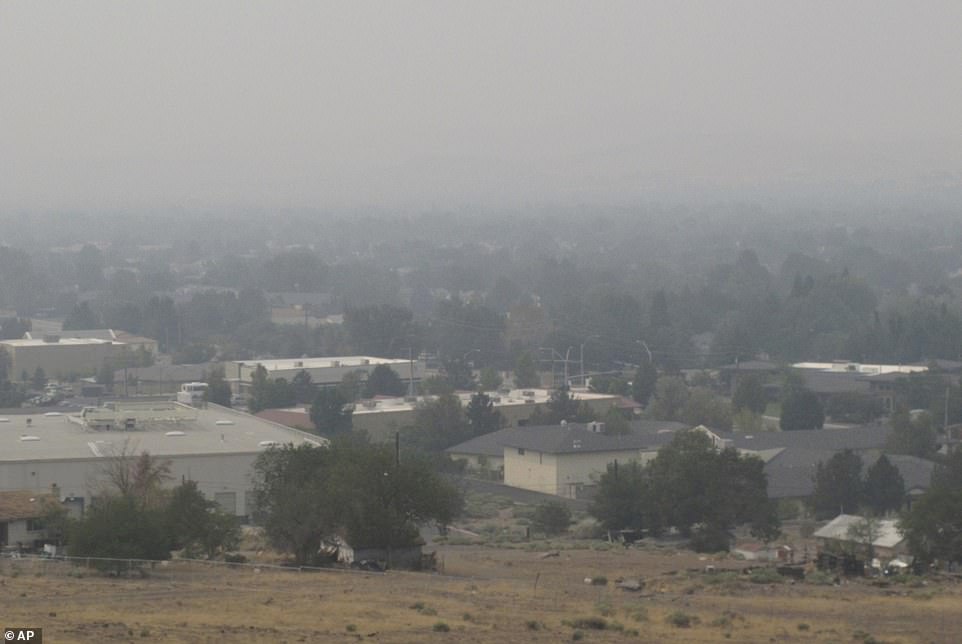 Smoke from California wildfires up to 200 miles away blankets a residential neighborhood  in Sparks, Nevada

Another group of 20 fires, called the SCU Lightning Complex, expanded by nearly a third to around 140,000 acres on Thursday some 20 miles east of Palo Alto.

In addition to about two dozen major blazes, small fires kept erupting, though most were quickly stopped. Crews were also battling blazes in the Sierra Nevada and Southern California wild lands.

Residents in portions of Lake and Napa counties as well as Sonoma County have been advised to evacuate as there was an ‘immediate threat to life and property’.

Record-breaking heat baking the West Coast is caused by a dome of high pressure over the desert east of California that is siphoning off moisture and causing precipitation to evaporate before it reaches the ground, sparking dry lightning.

California has warmed 1 to 2 degrees Fahrenheit since the beginning of the 20th century, and higher temperatures are blamed for longer and more intense fire seasons that have caused eight of its 10 largest wildfires in the last 15 years.

On Thursday, satellite footage from the NASA showed the high levels of smoke now hovering over the state and being pulled over the Pacific Ocean.

Other images showed how it had spread almost 200 miles to towns in Nevada. 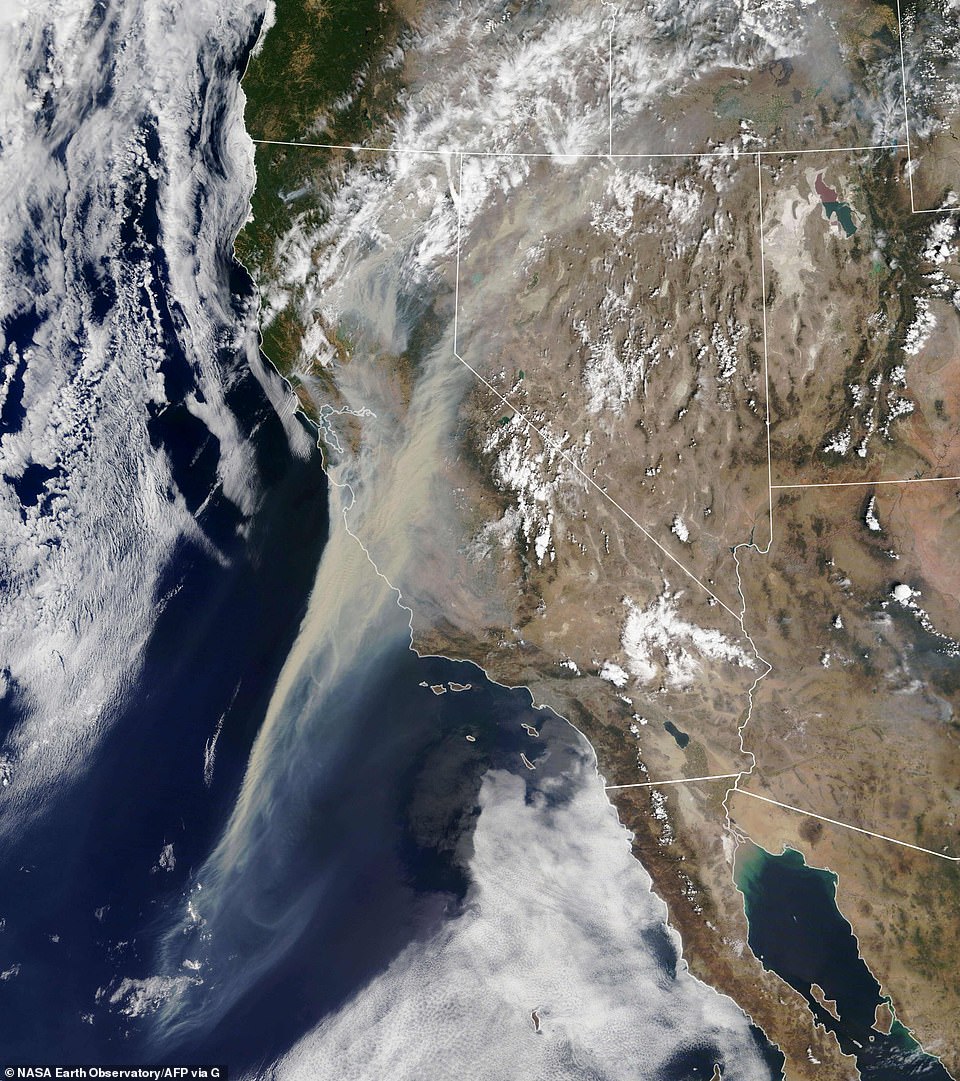 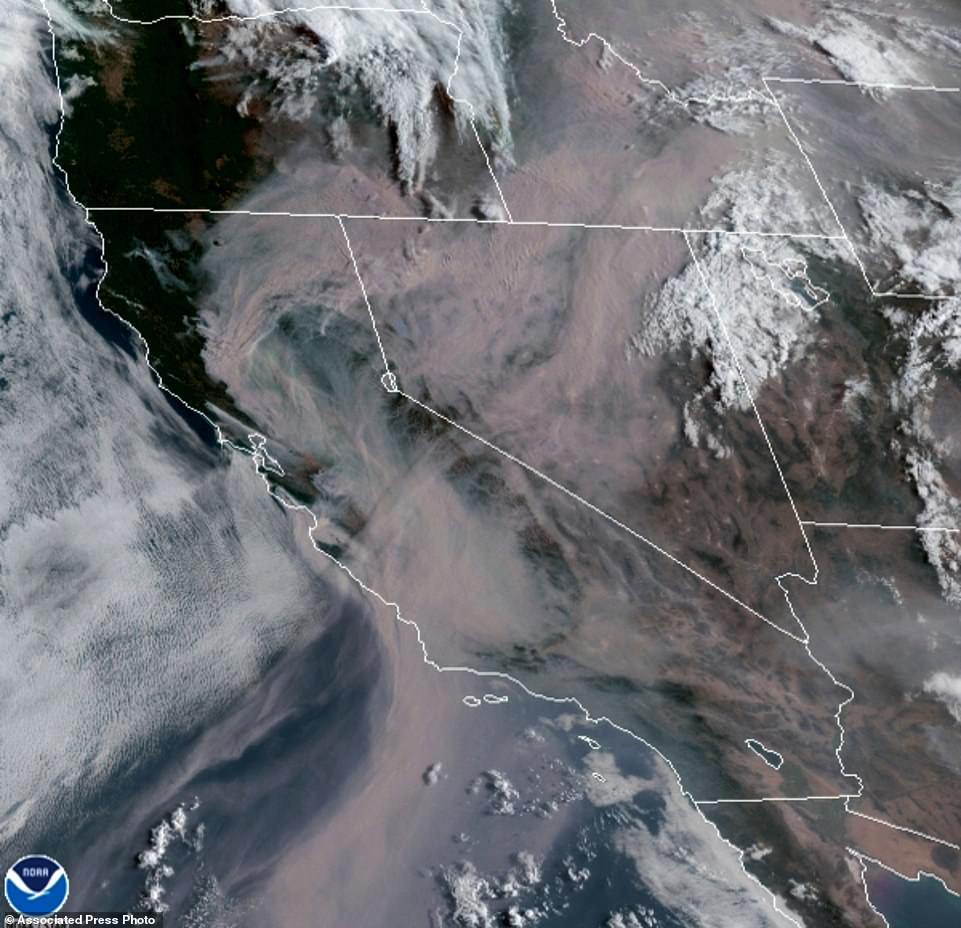 This satellite image from the Cooperative Institute for Research in the Atmosphere (CIRA) and released by the National Oceanic and Atmospheric Administration (NOAA) shows smoke from massive wildfires in Northern California, top left, being pushed by winds to the northeast on Thursday as firefighters continued to battle the destructive wildfires 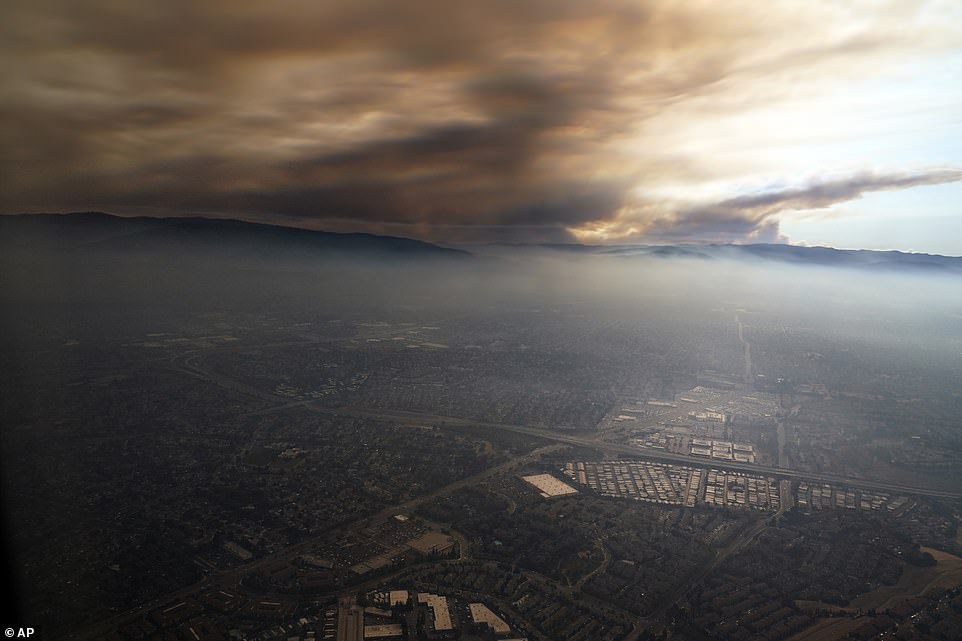 Inhaling smoke and ash will likely worsen the weakened lungs of people infected with coronavirus and undermine the natural defenses of those who do not have it, said Dr. Afif El-Hassan, a physician spokesman for the lung association.

‘If you think about indoor office spaces, patients with chronic lung conditions were likely already nervous with the pandemic,’ Dr. Sachin Gupta, a pulmonologist based in San Francisco told CNBC.

‘But with the air pollution and struggles to ventilate spaces, would they want to go in now?’

‘With the wildfires, we’re going to see increases in PM 2.5,’ added Dr. Neeta Thakur, a pulmonology and critical physician at UC San Francisco.

‘There’s some studies that have suggested an association between increases in particulate matter and severity of Covid-19 infections,’ she said. ‘Although how those are related is less well understood.’

According to Environmental Protection Agency measurements, the air quality index is measuring in the ‘very unhealthy’ (AQI 201-300) and ‘hazardous’ (>300) range in Central and Northern California.

‘These levels are rare in the Bay Area, and even healthy adults can experience immediate health impacts from short term exposure to these levels of fine particulate pollution,’ Erin DeMerritt of the Bay Area Air Quality Management District told CNN.

‘Exposure to wildfire smoke can irritate the eyes and airways, causing cough, a dry scratchy throat, and irritated sinuses,’ DeMerritt added, ‘it can trigger wheezing in those who suffer from respiratory illnesses’. 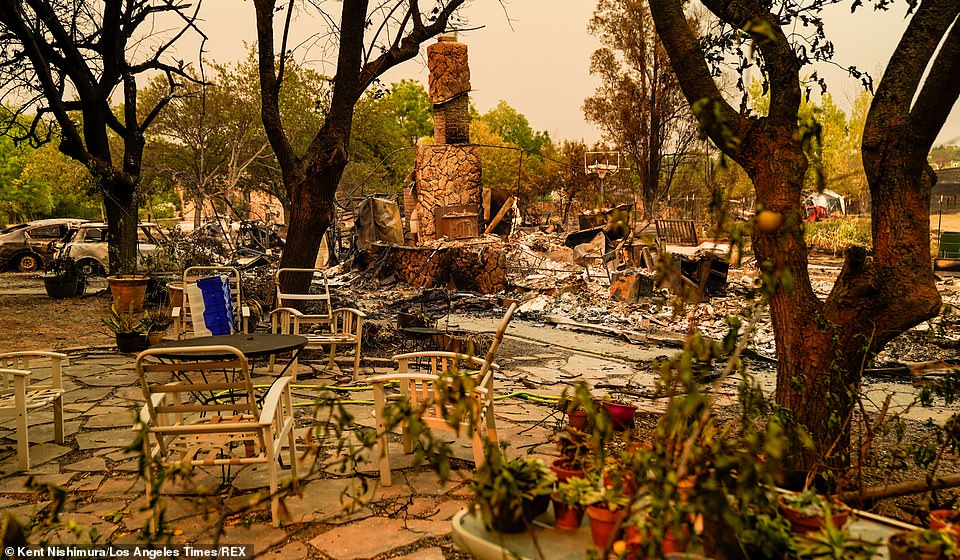 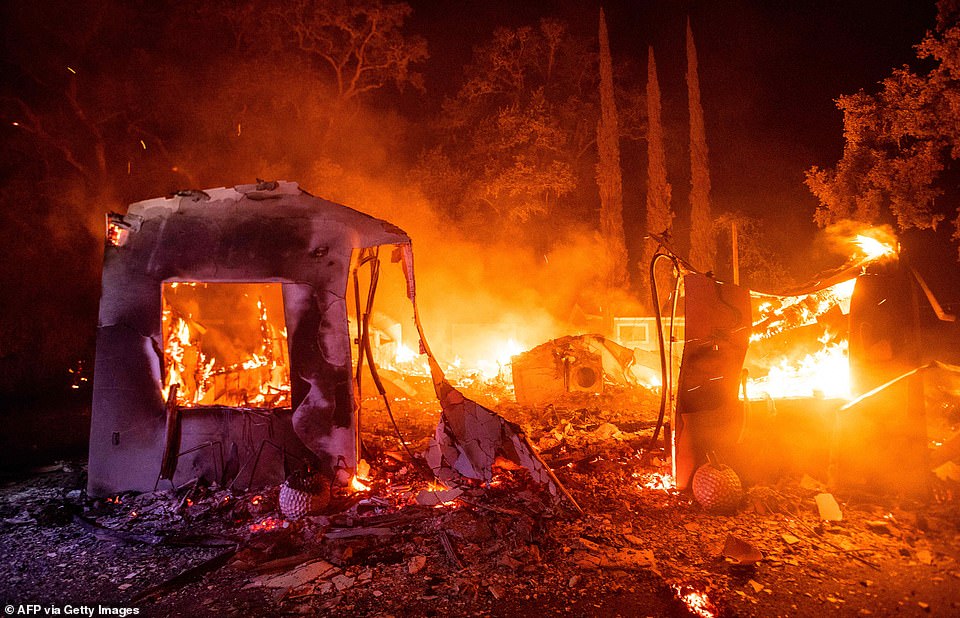 Governor Gavin Newsom requested 375 fire crews from out of state as California prisoners who normally fight fires were locked down for COVID-19 or released from prison to slow the spread of the virus.

More than 10,000 firefighters are on the front lines, but fire officials in charge of each of the major fire complexes say they are strapped for resources. Some firefighters were working 72-hour shifts instead of the usual 24 hours. The state has requested 375 engines and crew from other states.

‘That´s going to allow our firefighters that have have been on the front line since this weekend to have an opportunity to take some rest,’ Berlant said.

In Marin County, just north of San Francisco, where a smaller fire is burning near the Pacific Ocean, county fire chief Jason Weber said he is waiting for assistance from Montana to arrive this weekend.

He said in his 25 years in fire service, ‘we’ve never seen this level of draw-down’ from cooperating agencies, as there is heavy competition in the western United States for equipment and people.

Tim Edwards, president of the union representing 7,000 Cal Fire firefighters, said lawmakers need to allocate more money at a time when firefighters are working 40 to 50 days at a time without real relief.

‘Here we are, we´re not even into our peak fire conditions, and we don´t have enough resources throughout the whole state because we´re stretched so thin,’ he said.

Travis Air Force Base ordered non-mission-essential personnel to evacuate. Residents in nearby Vacaville, a city of 100,000, were roused before dawn Wednesday by orders to flee.

California State Parks announced full or partial closures of more than two dozen parks, including Big Basin Redwoods in the Santa Cruz Mountains, where the park headquarters and other facilities were damaged. The park featuring towering stands of ancient coast redwoods dates to 1902 and is the state´s oldest.

In Southern California, firefighters worked in high heat to increase containment of fires in mountains north and east of Los Angeles. A huge fire also burned in the remote Mojave National Preserve.