Clearway lanes within a 20-kilometre radius from the CBD will be converted to tow-away zones and motorists will be slapped with new parking fines under an Andrews government plan set to drain millions of dollars from local council coffers.

Councils are weighing up a possible legal challenge amid a multimillion-dollar state government "cash grab" that will see the government collect parking fines on 322 clearway lanes instead of councils.

The Age has been told the government is also considering using private tow truck drivers to enforce the new tow-away zones, which will affect more than 120 suburbs across Melbourne.

A spokesman for the City of Boroondara confirmed it was one of several inner-city councils considering a legal challenge to the decision, amid claims there had been "zero consultation" with local government.

"This is a cash grab by the Victorian government and the only winner here is the state. There is no benefit to taking away the enforcement of the clearway zones from the affected councils," the spokesman said.

Boroondara council, in Melbourne’s inner-eastern suburbs, has been enforcing 44 clearways in its municipality for several decades and estimates it will lose about $600,000 annually after the recent changes. 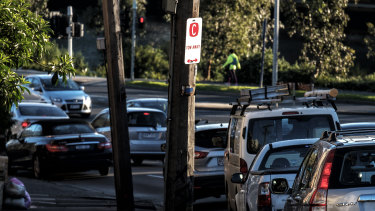 The decision, which was announced to councils at a meeting in July, is expected to punch a significant hole in the finances of other municipalities, which have been battered by the closure of recreation centres and a slump in revenue from parking fines due to coronavirus restrictions.

The congestion-busting plan rolled out across 18 local government areas is designed to unclog Melbourne’s roads as COVID-19 restrictions start to lift, with car use expected to skyrocket due to infection fears.

From December 1, all peak-hour clearways within 20 kilometres of the CBD will become tow-away zones, tripling the number of those zones in that area. New road signs are set to appear from next month.

Motorists parking in a clearway will pay a $165 fine, in addition to $361 required to release the impounded vehicle.

The changes don't require changes to legislation and will be gazetted by the state government. The state will take over clearway enforcement and collect revenue on existing tow-away lanes from October 1.

New daily charges will also extend to private operators blocking traffic lanes on arterial roads in 121 suburbs across the city. A daily fee of up to $252 per lane will be rolled out, adding to existing fees on roads operated by councils.

The new blanket tow-away zone is meant to standardise peak-hour clearways across Melbourne, with only some clearway lanes also serving as tow-away zones as individual local councils enforce their own rules.

The government has indicated it will not add new clearway lanes, extending clearway times or increasing tow-away fines. The government estimates it will raise $2 million from clearway management in the 2021-22 financial year and this would be reinvested back into enforcement.

The move has been welcomed by the trucking industry and RACV general manager of public policy Bryce Prosser, who said it would ease bottlenecks at a time when traffic was set to worsen.

But councils claim they were not properly consulted and insist they are best placed to manage clearways.

"Our annual revenue is in the order of about $140 million, so, a $1 million loss is significant, whereas a million-dollar revenue addition to the state government is not significant at all."

The Moreland Council, in the inner north, estimates it will lose about $900,000 annually from the shift in enforcement powers.

"Moreland Council is very concerned by the proposed changes to clearways and has requested an urgent meeting with Department of Transport representatives to discuss," a council spokeswoman told The Age.

However, City of Melbourne chief executive Justin Hanney said the changes would only have a minor impact on clearways around the CBD.

"There is minimal change within our municipality as the areas that will become tow-away clearways are already no-stopping clearways," Mr Hanney said. He said some changes would be made to Kings Way, Dynon Road, Docklands Highway and Lorimer Street.

Stonnington council predicts it will lose up to $1.5 million annually due to the change.

"Taking this function from councils will reduce their income significantly – this is revenue that would be spent on improving local infrastructure and services," Stonnington Council chief executive Jacqui Weatherill said.

A Transport Department spokesman said Nationwide Towing would take date and time stamp photos of vehicles and the department would issue manual infringements.

The state would gradually start managing clearways from October to July next year.

"We want to ensure our road network works as efficiently as possible, particularly as more people are expected to use cars to get around when coronavirus restrictions ease."

"The way we travel around Melbourne will continue to be impacted by the global coronavirus pandemic – these important changes will mean people spend less time stuck in traffic and more time with their families.” 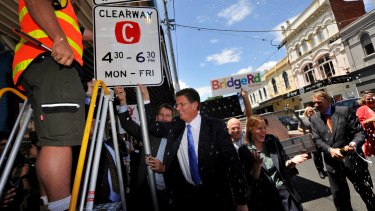 The crackdown is part of a $340 million roads package that includes 700 CCTV cameras and 200 wireless travel time sensors to identify bottlenecks, along with extra incident response crews and specialist traffic engineers.

In 2010, Stonnington and Yarra councils unsuccessfully sued the then-Brumby government over a planned extension of clearway zones in a swag of local government areas. The Liberals sided with local councils and won the seat of Prahran later that year.