BERDYANSK, Ukraine (Reuters) – When the Island Bay cargo ship arrived from Beirut at the Kerch Strait, gateway to the Azov Sea, it sailed into a perfect storm of geopolitics and bad weather. 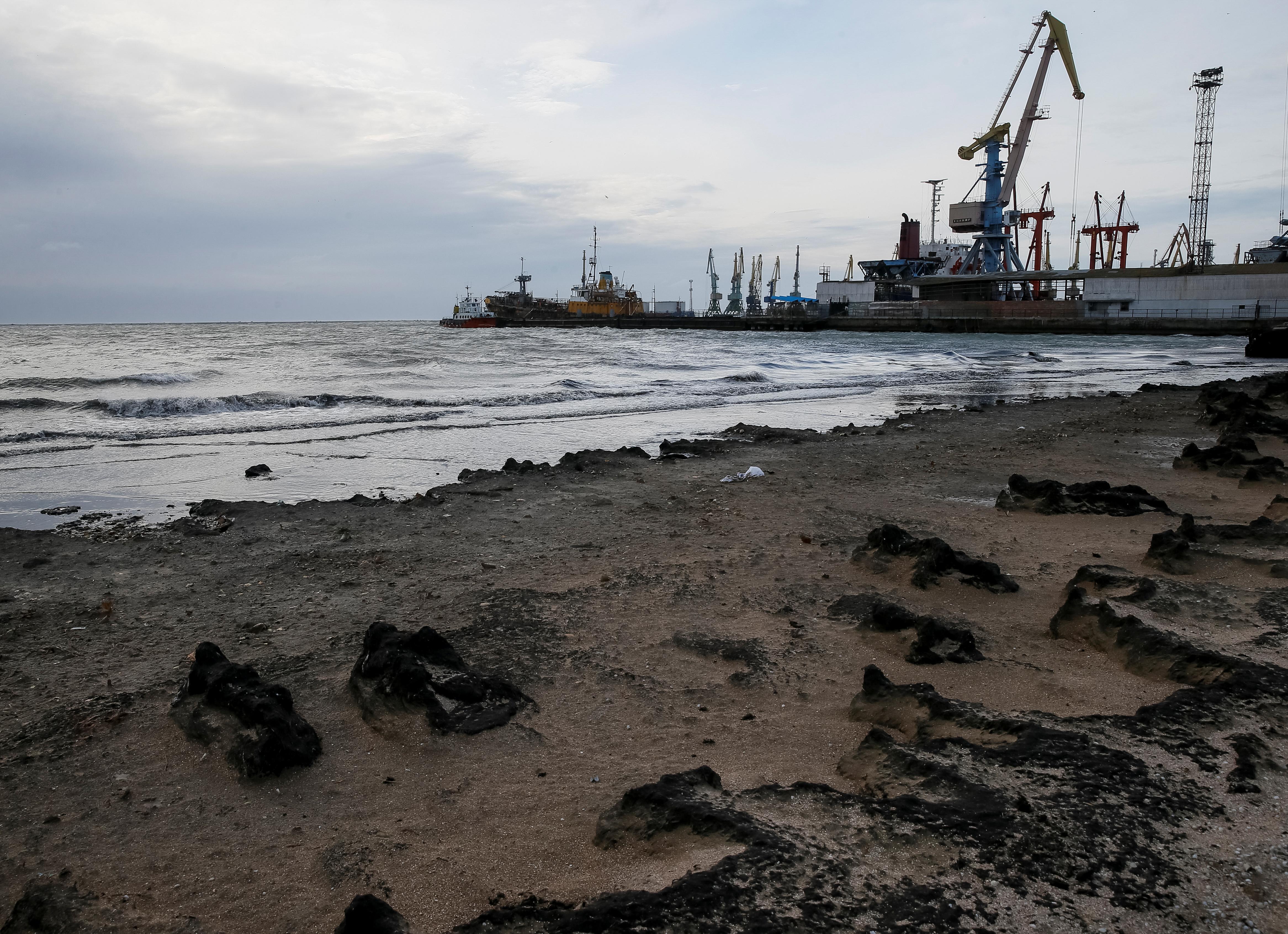 The following day, Russia opened fire on three Ukrainian naval ships, impounded them and detained their sailors, some of them wounded. It then blocked the strait by putting a tanker underneath a new bridge it has built linking the Russian mainland to the Crimean peninsula it annexed from Ukraine in 2014.

While the world digested the implications of the Nov. 25 incident, the most explosive clash in recent years, Russia said it had reopened the channel to the Azov Sea, which is shared by Russia and Ukraine.

But Island Bay remained at anchor outside the strait, lashed by gale force winds and sleet, its hull icing over while cargo ships amassed on either side.

On Monday, a week on, the captain reported seeing 20 vessels awaiting clearance to cross. Refinitiv data that day also showed 20 Ukraine-bound vessels held up at the strait since Nov. 25, with two others allowed through.

Meanwhile, Island Bay’s cargo of 5,500 tonnes of wheat, destined for flour mills in Libya, waited in the Ukrainian port of Berdyansk.

The saga of the ship is a window on the leverage Moscow has over Ukraine’s Azov seaboard, affecting dock workers, port operators, brokers and farmers who depend on the route.

Russia, whose coast guards began inspecting traffic in the Kerch Strait eight months ago, blamed inclement weather for the delay. But on Sunday, when the skies cleared, just a handful of ships passed through; by Monday evening, the Island Bay’s captain’s frustration was beginning to show.

“It is acceptable weather for transit. Coast guards have own opinion,” his log, seen by Reuters, said. That day, he reported seeing just two ships cross into the Azov Sea.

Ukraine says the hiatus is one of many since the Russian spot-checks began in May, when Russia opened the Kerch bridge, interrupting exports of grain and steel and imports of coal. Moscow denies any disruption.

In Berdyansk’s port, where icy winds had recently ripped off the roof of a nearby shed, staff of stevedore company Ascet Shipping were reading the daily reports from the Island Bay with growing concern.

Ascet loads almost a million tonnes of Ukrainian grain a year onto cargo ships in Berdyansk and was waiting to load the Island Bay; its size means each day of waiting time costs around $2,000-$2,500, Ascet’s chief executive, Denis Rusin, said.

This has made Berdyansk an unpopular port in recent months.

“Ship owners do not want to go to Berdyansk,” said Rusin, whose clients include U.S. firm Cargill [CARG.UL], one of the world’s largest dry bulk and tank shipping companies. “Buyers are refusing to bet on passage.”

Since Russia and Ukraine clashed in the strait, Ukraine has introduced martial law in 10 regions, including the Azov Sea coast – highlighting the risks of doing business with Berdyansk.

“For us this was the worst week in recent years,” Rusin said. “Clients have stopped considering the possibility of signing contracts for delivery in January, let alone February or spring,” he said.

Some Ukrainian politicians have accused Moscow of trying to strangle Ukraine’s Azov Sea ports in preparation for an invasion from the east, following on from Crimea’s annexation and the subsequent breakaway of Russian-speaking eastern Ukraine.

Moscow says that idea is a fantasy dreamt up by Ukraine’s pro-Western leaders ahead of elections next year. It says it has the right to patrol the strait.

The recent escalation in tensions has not affected ships coming to pick up grain from the Russian side of the Azov Sea, according to Sergei Filipov, director of trading firm QAM7 Dubai, which has operations there. He said inspections have delayed travel by the usual two or three days.

On its eleventh day at anchor in Kerch Strait, with skies finally clear, Island Bay reported to Berdyansk: “We called everywhere to make guards (come and) inspect the vessel, but their intentions cannot be explained.”

The situation has sent Rusin racing to further revise down his business forecasts.

Climbing out onto the windswept roof of his office on Friday, he pointed to a single truck of grain where multiple trucks used to line up along the dock.

“This was a change of plan that happened this week.”

At the government Port Authority in Berdyansk, officials said they feared for the port’s future as clients look to other locations with direct access to the Black Sea.

“Of course we would prefer (to use other ports),” said Erdem Sekreter, fleet manager at Turkey’s Bayraktar shipping group, which has two ships waiting to cross the Kerch Strait to reach the Ukrainian coast.

“It is getting more expensive for ship-owners to go to the Azov Sea – the Ukrainian side of course,” he added. “We are paying out of our pocket now.”

Bison Group owns 40,000 hectares of arable land in Zaporozhye region and exports much of its harvest via Berdyansk.

With ship-owners raising freight charges to factor in the new risks in the Azov Sea, the costs will be passed down to grain producers, Bison deputy director Igor Serov said. “It hits agricultural producers really hard.”

Prices will have to go down by at least $10 per tonne, a trader at Atria Brokers, which handles Berdyansk grain, said.

But producers may not have other options. The railway infrastructure is not in place to send exports via Black Sea ports instead, Serov said, and transferring grain by truck to Odessa, for example, would cost an extra $40 per tonne.

Buyers are also pulling back, afraid of the risks.

“Our sales have fallen,” the Atria trader said. “It has affected us in a fundamental way.”

Every day Island Bay’s cargo sits in port, it racks up costs for traders. Grain can spoil, and storage costs are steep.

“The market is suffering… everyone along the chain is paying the price for these war games,” a grain trader said, declining to be named due to the sensitivity of the situation.

On Tuesday, Ukraine’s agriculture ministry said some grain shipments from the Azov Sea had resumed. 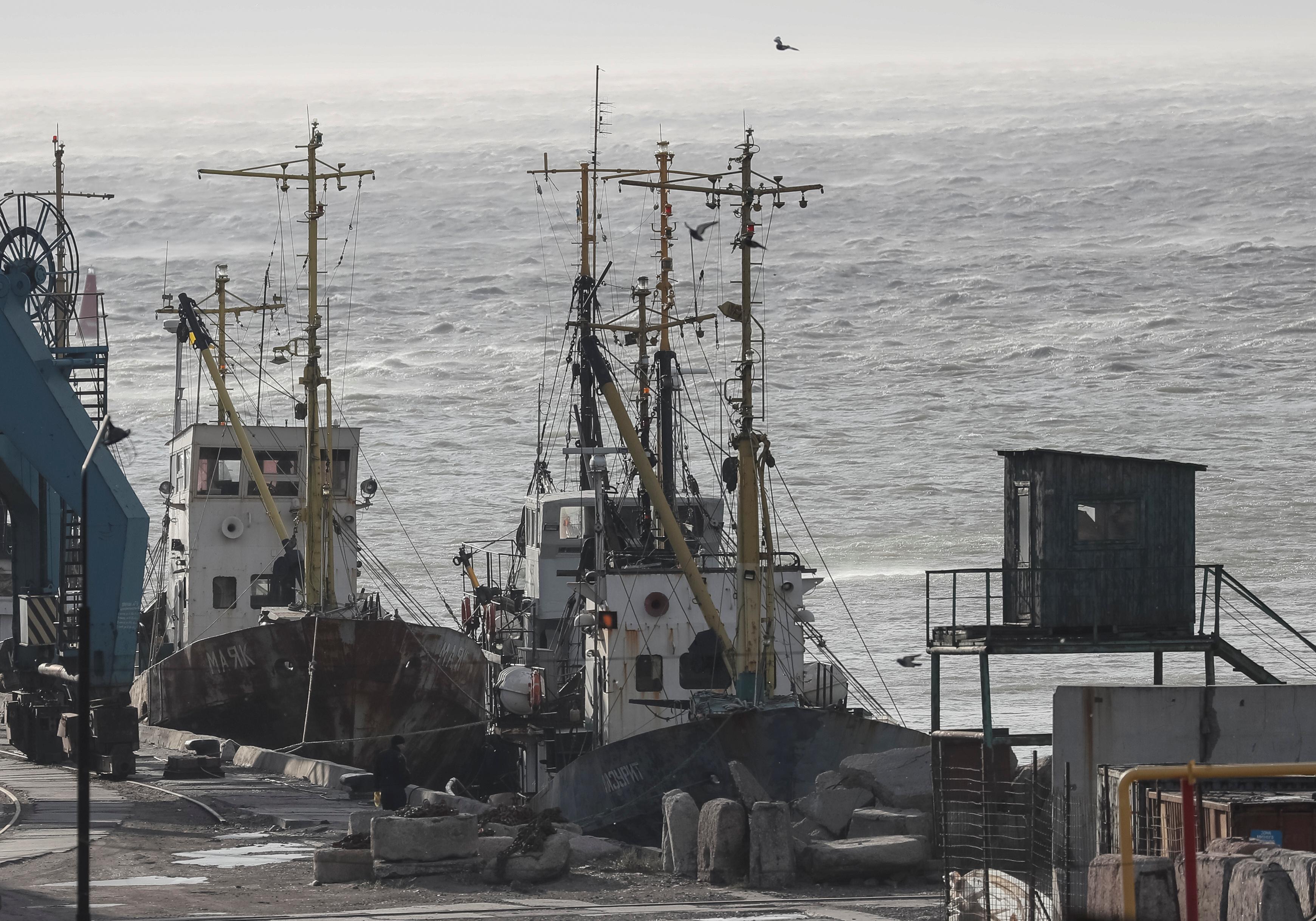 Five of the 14 ships headed to the Ukrainian port of Mariupol, held up since the stand-off, were still waiting to cross on Wednesday, Refinitiv data showed. One had turned back to Istanbul.

In comparison, of the ships aiming for one of Russian city Rostov-on-Don’s ports, that had arrived to Kerch Strait since the stand-off began, none were still waiting for passage, the data showed the same day.

Only one out of the six boats headed to Berdyansk had crossed by Wednesday. After twelve days at anchor in the waters near the strait, Island Bay was still waiting.