European leaders are becoming increasingly concerned about China's crackdown on press freedom after two Australian journalists were forced to leave Beijing, as global outrage over the case grows and business warns of an investment exodus.

After a series of diplomatic discussions with Australia over the past week, European Union member-state leaders may raise the issue with Chinese President Xi Jinping in a meeting on Monday, sources with knowledge of the negotiations confirmed. 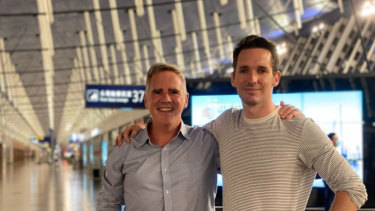 The Sydney Morning Herald and The Age have been waiting for a visa to be approved since November. US journalists from The New York Times, The Wall Street Journal and The Washington Post were expelled in March. Media organisations from the EU are also experiencing difficulties getting correspondents back into China. Their reporters already in the country have been increasingly subject to surveillance.

Michael Pulch, the EU ambassador in Australia, said the actions amounted to restrictions on freedom of expression and opinion.

"The role of journalists in providing information from around the world is more important than ever, and must be safeguarded with no exception of any kind," Dr Pulch said.

The US State Department and British Foreign Office have also condemned the treatment of the media in China. As part of its first significant policy foray into the Indo-Pacific last week, the German government said access to fact-based information was key pillar of its foreign policy in the region. "Authoritarian actors make intensive use of communication to manipulate and influence civil societies," it said.

Anna Fifield, The Washington Post's Beijing bureau chief, said the situation had dramatically deteriorated in the past year as the Chinese Communist Party became more sensitive to coverage of the coronavirus and human rights issues in Xinjiang and Hong Kong.

"With the expulsions of the American journalists and the way that Bill and Mike have been treated it has become very clear that China sees no benefit in having foreign correspondents in China anymore," she said.

"Xi Jinping wants complete control of everything so he has been trying to silence anyone with a different or outside view – lawyers, human rights activists, journalists, independently minded academics. It’s chilling"

The US tightened visa restrictions on Chinese journalists in May, limiting visas for Chinese reporters to 90 days with the option for an extension. Australian intelligence authorities questioned four Chinese journalists in June over their links to a WeChat group that allegedly sought to influence Australian politics. The four journalists have since returned to China. The Chinese Foreign Ministry has accused the US and Australia of hypocrisy and harassing its citizens.

Speaking from Xinjiang after being turned around at a police checkpoint, Fifield said Chinese authorities were trying to expel as many journalists as possible and to restrict those who remain to just "parroting what the Foreign Ministry says each day".

"It just becomes a diplomatic shouting match that is devoid of any human content in a way," the New Zealand-born journalist said. "When you lose foreign correspondents, you lose the granularity and the humanity from the coverage.”

Business leaders have warned the lack of independent reporting poses a risk to investing in China.

"Things might look stable now, but as soon as we get a negative surprise from China and don't have a capacity to understand what's going on, the consequences of a lack of information will be felt," Michael Hirson, an analyst at the Eurasia Group told the Financial Review.

The European Chamber of Commerce, which represents 1700 companies in China, on Friday said companies had been left navigating a minefield of profound uncertainty in the wake of the coronavirus.

"Sensitive issues in Xinjiang and Hong Kong have come to a head in Europe and North America," the chamber said.

"People who two years ago could not be counted on to find either region on a map are now demanding that their democratically elected leaders take action against China to bring about a resolution to these issues."

The highly-anticipated video-call between European leaders and China comes amid plummeting public opinion of teh Asian giant in Europe.

A European Council on Foreign Relations survey of 11,000 people across nine countries, including Bulgaria, France, Germany and Italy, released on Friday found 62 per cent of Europe’s citizens see China in a “negative” light, while just 7 per cent see Beijing as a “useful” ally in their fight with the coronavirus.

"They have concluded that, rather than being a constructive partner, China has increasingly become a rival that is acting against European interests,” said Janka Oertel, the Asia director at the European Council on Foreign Relations.