A man in his 40s has died and 12 other people were injured after an accident while climbing along the Dorset coast.

The group had been ‘coasteering’, which sees people climb along jagged coastal rocks, dive into the sea, swim to the next outcrop and repeat the process.

A search and rescue operation was launched on Sunday afternoon on the Purbeck coast after the group got into difficulty in the water and shouted for help. 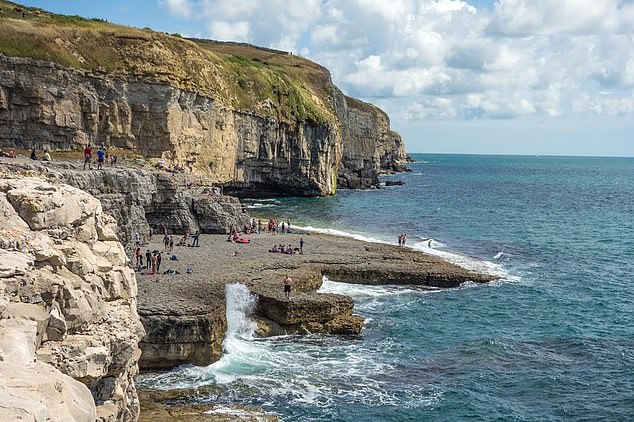 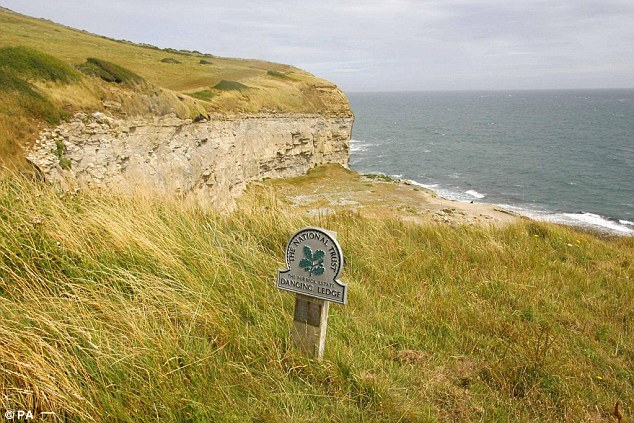 Coastguard rescue teams, RNLI lifeboats, the coastguard helicopter, paramedics and police were called to the scene between Dancing Ledge and Hedbury Head.

Dorset Police later said a man in his 40s was pronounced dead at the scene. His body was recovered from the water and taken to the clifftop by a lifeboat crew.

The man was said to have developed breathing difficulties a short time into the arranged outing, and was given first aid after falling unconscious while in the sea.

Coasteering involves braving a rocky coastline by climbing, jumping, and swimming, without the aid of boats or surf boards.

People attempting it climb along jagged coastal rocks, dive into the sea, swim to the next outcrop and then do the same again.

It is popular along the Dorset, Devon and Cornwall coasts because of their rocky outcrops and challenging seas.

Several outdoor activity providers run coasteering sessions, including Dorset Coasteering – which ran the session on Sunday and has been operating for ten years.

The company describes coasteering on the Jurassic coast as ‘incredible’ and says it is ‘perfect for groups, individuals and families’.

The company supplies wetsuits, buoyancy aids and helmets, and just asks participants to bring swimming gear and trainers to wear in the water.

UK coasteering has resulted in two previous deaths over the past 12 years.

In February 2007, outdoor pursuits charity director David Bellew, 24, was swept off rocks to his death by rough seas while coasteering for the first time off Mewslade Bay in South Wales.

And Royal Navy reservist Charlotte Furness-Smith died in a sea cave at Durlston, near Swanage in Dorset in November 2013 while coasteering.

The other explorers and instructors were plucked from the water by lifeboat crews and taken to the shore where they were checked over by paramedics.

The family of the dead man, who was on a trip organised by Dorset Coasteering, have been informed of his death – and the coroner has also been notified.

A Dorset Coasteering spokesman said: ‘We are extremely saddened to confirm that man who was part of a coasteering group at Hedbury Quarry developed breathing difficulties and fell unconscious while in the water shortly after beginning the activity.

‘Despite being quickly rescued from the sea by our instructor and given emergency first aid on the shore, very sadly he could not be resuscitated.

‘No one else was injured during the incident and the rest of the group were transported back home safely later that day. The fact that it was not possible to save him will remain with us all for a very long time. At present we are unaware what triggered his breathing difficulties to the extent that he could not be revived, no doubt this will be confirmed in due course by the authorities.’

A police spokesman said: ‘At 4.24pm on Sunday, we received a report from the coastguard about a group who were believed to have been involved in coasteering whereby one member got into difficulties at Dancing Ledge near Langton Matravers.

‘Sadly one member of the group, a man in his 40s, was pronounced dead at the scene. His next of kin have been informed and the coroner notified. The death is not being treated as suspicious.’ 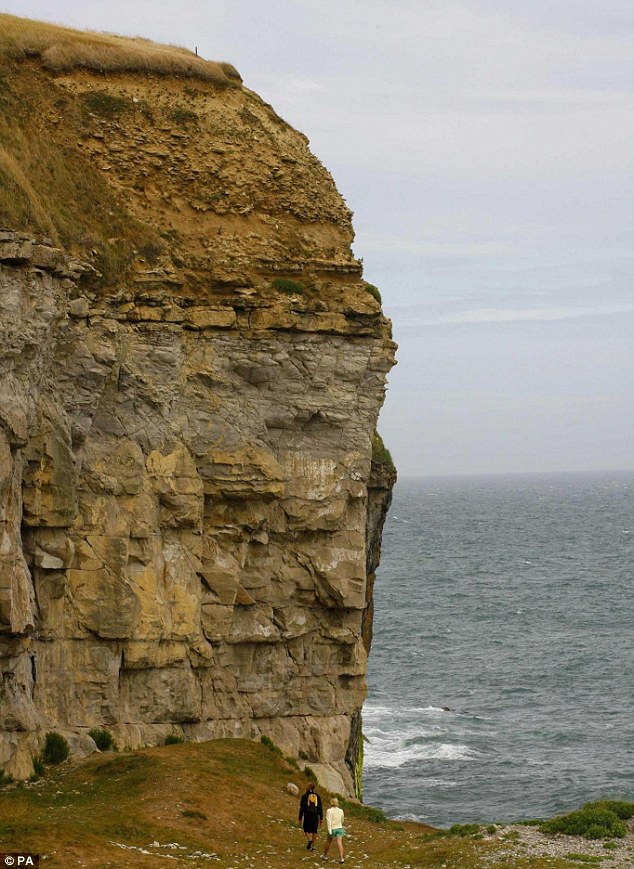 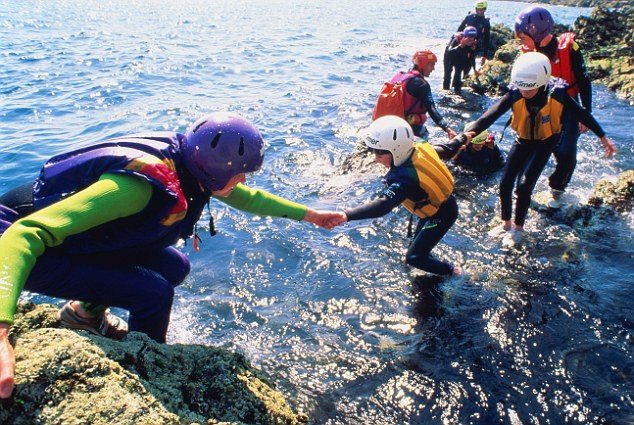 A file picture of coasteering, which involves scrambling over and wading through water 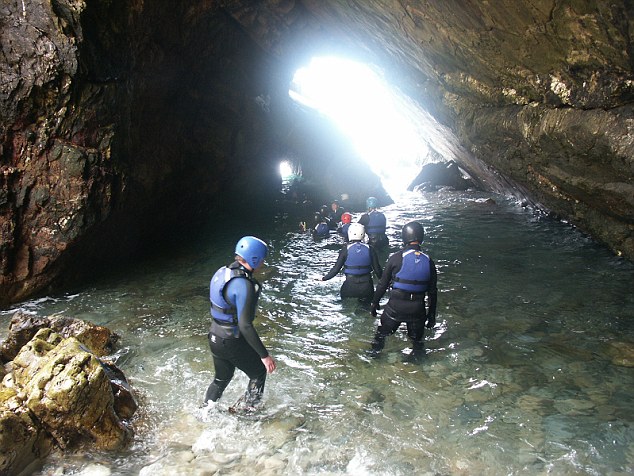 A Coastguard spokesman said: ‘HM Coastguard co-ordinated a large search and rescue operation between Dancing Ledge and Hedbury Head after a large number of people were reported to be in the water in difficulty. 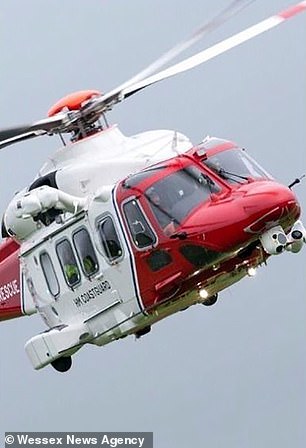 ‘Several reports came into the coastguard at around 3.30pm on Sunday from members of the public and fishing vessels reporting a group of about eight to 10 people in difficulty in the water and shouting for help.

‘Swanage and St Albans Coastguard Rescue Teams, Swanage RNLI Lifeboats and the Lee-on-Solent Coastguard helicopter have all were all sent to the area and a number of nearby vessels responded to assist.

‘The South Western Ambulance Service, HEMS (Helicopter Emergency Medical Service) and Dorset Police were also on scene. It is believed the casualties got into difficulty whilst coasteering and it was reported that they had lifejackets on.

‘Eight people were recovered from the water by the lifeboat and a ninth casualty was recovered to the clifftop by two of the inshore lifeboat crew. In total 12 casualties, including three instructors, were taken to the nearby boathouse for medical assessment.’

A spokesman for South Western Ambulance Service confirmed they sent paramedics following a call at 3.32pm on Sunday.